Tresillian is a spacious, dog-friendly farmhouse with sea views, great walks and a good local pub. Beamed ceilings, an inglenook fireplace and wood-burning stove create a cosy feel, and the four bedrooms share two bathrooms. Nearby Sandpipers, sleeping two, can be rented, too.
• Sleeps eight, week from 28 December, £1,614 (15% discount), coolstays.com 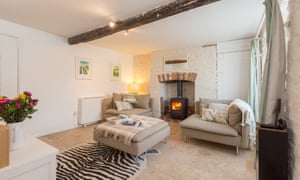 Classic Cottages has more than 300 properties available for New Year in the south-west, including Greenhills Cottage near historic Bruton. With two sitting rooms and three bedrooms, it’s close to the Mendip Hills and Wells. No children from one to five.
• Sleeps five + cot, week from 28 December, £756 (20% discount), classic.co.uk 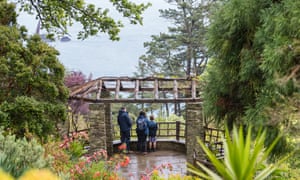 One of many National Trust lets, this Chauffeur’s Flat is a one-bedroom art deco apartment above the “motor house” on this 24-acre estate. Early risers have the gardens to themselves and the South West Coast Path is on the doorstep.
• Sleeps two, three nights over New Year, £395 (reduced from £465), nationaltrust.org.uk 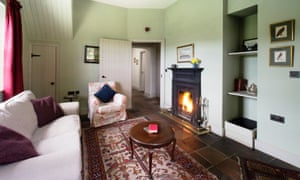 Options with Host Unusual include Magherintemple Lodge, a historic gatehouse on the north-east Antrim coast, close to several Game of Thrones locations. Ballycastle, the nearest town, has several options for dinner. The open fire is cosy for nights in, and it’s a short drive to the sandy beach for walks. With one double room and another with bunk beds, it’s great for families (dogs welcome).
• Sleeps four, three nights from 29 December, £349 (£127 saving), hostunusual.com 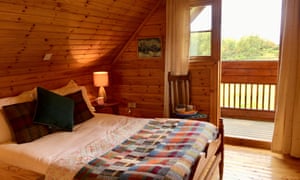 Big Sky Lodges is a collection of Scandi-style log cabins in 17 acres of woodland and meadow with highland cattle. Pine-lined rooms and wood-burners mean hygge vibes. The Muir of Ord, the nearest village, has a few takeaway options and a bakery. It’s a good base for exploring part of the North Coast 500 and Loch Ness. Inverness, the Highlands’ largest city, is 10 miles away.
• Eagle Lodge sleeps six, three nights from 29/30 December, £495 (including bubbles and hamper), hostunusual.com 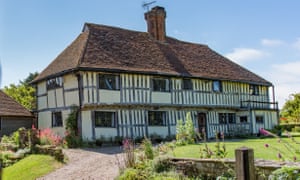 Among New Year options with Mulberry Cottages is Norwood Dairy, a newly converted barn with vaulted ceiling, open-plan living area, underfloor heating and modern kitchen in Wormshill, east of Maidstone. Steps lead down to a twin room, and upstairs there’s an en suite master bedroom with skylights and beams. There are walks on the doorstep and the Blacksmith Arms is a stroll away.
• Sleeps four, three nights from 29/30 December, £640, mulberrycottages.com

Appropriately for the season, this stable is in Bethlehem (the one in the upper Tywi valley), surrounded by glorious countryside. Once a farm outbuilding, Y Stabl is now a comfortable hideaway for a group of friends or large family group. Exposed beams, high ceilings and slate floors lend a sleek feel and the dining room seats 12 for celebratory feasts (there’s even a pulpit, for New Year toasts). On the western edge of the Brecon Beacons, it is ideal for long romps or cycle rides.
• Sleeps 10, week from 28 December, £1,692 (short breaks may be possible), cennencottages.co.uk 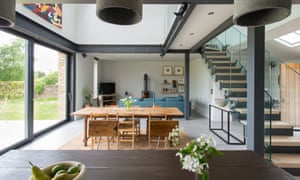 For a smart New Year escape, the Field Barn is a chic conversion in a pretty Cotswold hamlet four miles from Witney. High ceilings and sliding glass doors add a sense of space, while the living area combines industrial-chic metalwork with thick rugs, wood-burner and clever lighting (a generous first breakfast is included). The glass-sided staircase leads to two peaceful en suite bedrooms. There are countryside walks and Cotswold gems on the doorstep, and Oxford is half an hour away.
• Sleeps four, four nights from 28 December, £800, sawdays.co.uk 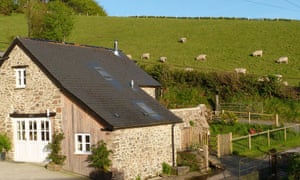 Discounted New Year choices with Holiday Cottages include Stags View, a peaceful two-bedroom, dog-friendly property at the foot of Dunkery Beacon, Exmoor’s highest point. Great walks with views across the national park are on the doorstep and the beaches of Dunster and Blue Anchor are close by (the nearest pub and shop are two miles away). Exmoor is a designated Dark Sky area – perfect for New Year’s Eve star-gazing.
• Sleeps four, four nights from 28 December, £584 (reduced from £613), holidaycottages.co.uk