I feel for an African beauty: Pemba’s seductive powers are truly irresistible

Midnight, and I’m putting banana slices on a saucer in the hope of enticing bush babies to visit.

So far, they’re a no-show. But I’m content to sit and wait on the terrace, in the warm hug of the Zanzibari night, under a brilliant shock of stars.

‘Pole pole’, as the Swahili saying goes — slowly slowly. You hear a lot of that in these parts. This is Pemba, one of the islands in Tanzania’s Zanzibar archipelago. 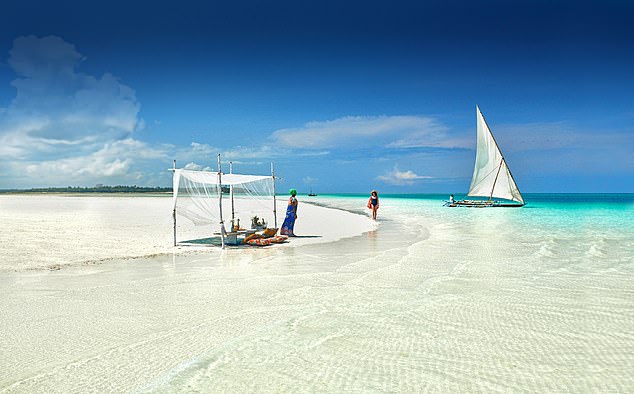 Idyllic: Heavenly white sands at Constance Alyana on the northernmost tip of Pemba

En route from the tiny airport, we pass giggling boys back-flipping into ponds, hump-shouldered cows, men playing cards in the shade of jojoba trees, and women in bright printed kitenge wraps. Neat fields of peanut plants lie either side of the track.

The driver smiles: ‘Like Zanzibar in Eighties,’ he says, as the road takes a distinct turn for the worse and we bump into the deep-green embrace of the Ngezi Forest Reserve, the last remaining tract of indigenous forest that once covered most of Pemba.

While Zanzibar is all hubbub and high volume, Pemba is a soothing lullaby. It feels far-flung and romantic — the kind of place you might go to remind yourself you’re still in love.

The Constance Aiyana is a luxurious outpost on the northernmost tip of the island — part boutique hotel, part sculpture park.

Today, it’s run by Constance Hotels and Resorts. Each of the 30 thatch-and-limestone villas is positioned to maximise the ocean view. They all feature the outsize carved wooden doors that are a Zanzibari speciality, while the huge bathrooms are an extension of the garden, so you can take an outdoor shower and watch geckos dart behind your shampoo.

Aiyana means ‘everlasting garden’, and the grounds are full of aloe, hibiscus and bougainvillea, all set against the startling blue of the Indian Ocean. I spend a blissful morning lounger-loafing on the beach — a gorgeous curve of coralline sand dotted with volcanic outcrops — gazing over my sunglasses to watch Pemba go about its business. 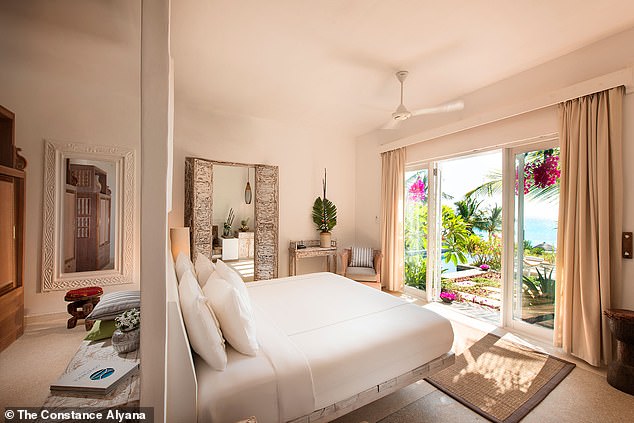 Men gather seaweed fronds at low tide to be dried and sold to Chinese traders (it’s a Beijing delicacy); others snorkel for red snapper. Boys play tag in the pale waters.

The sea is equally active at night, when locals hunt octopus in the shallows, or set off in wooden ngalawa boats in search of kingfish and squid, which grace our menu the next day.

Pemba is captivating enough to get me out of bed at dawn for a bike ride to the local village with Hassan, one of those hotel workers who crops up in all sorts of roles, like Peter Sellers in Dr Strangelove.

We ride past a string of village houses, with outdoor ovens for drying coconuts and mats laden with the clove harvest. ‘The local shop,’ says Hassan, nodding towards a jumble of tomatoes on an ancient table.

We arrive at the lighthouse — whose kerosene lamp is lit each evening by its elderly keeper — and climb its fishy iron tower to bag a spectacular view of northern Pemba, emerald green against the fierce blue of the sea.

There’s a picnic lunch on the soft sand, and we return to snorkel over purple and gold coral boulders, rich with zebra, angel and pipe fish, and numerous silver fish which scatter from my hands like a spell.

On another day, I take a Swahili cooking class, learning to prepare octopus with tomato and coconut milk in traditional clay pots. Later I slip out for a massage on Bliss Rock, a spa outpost that the Aiyana has built on one of the islets in the lagoon.

I even take a class in Swahili scarf-tying, hosted by the beautiful Grace, who also works in the resort restaurant. Grace looks like an African queen in her kanga headscarf. 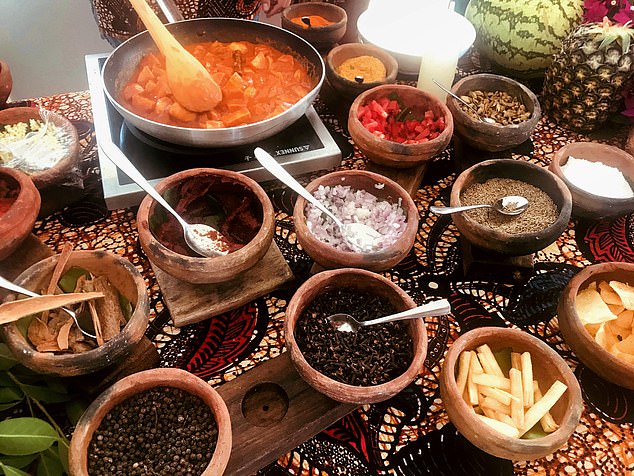 My effort makes me look very Nora Batty, hardly helped by the fact I spent too long in the crazy African sun and have a honking red nose, which would make a decent lighthouse if the kerosene runs out.

The sun sets fast over the horizon here, as if it’s late for a date. Staff — probably Hassan — have dug out a beach bar in the sand. Perfumed bonfires are lit. On a clear night, you can see the distant light fuzz of Mombasa.

Tonight we eat together, family-style — cigale hot pot, a local lobster stew, served with a Scotch bonnet chilli on the side, as if in provocation. The meal ends with sweet cashew brittle and a shot of dark cardamom and ginger coffee.

The kitchen staff — Hassan included, of course — emerges to sing happy birthday to a guest. They sing and sway.

This really is a place to savour. As I leave, I realise that in my time on Pemba, I have seen no litter, no beach plastic, no advertising hoardings — not one. Admittedly, I’ve seen no bush babies, either. I’ll have to come back another time.

Four nights all-inclusive in a Beach Villa at Constance Aiyana, plus a night on arrival at the Park Hyatt Zanzibar with breakfast and a privately guided Stone Town walking tour, costs from £2,255. It includes flights between Zanzibar and Pemba and international flights with Qatar Airways from London to Zanzibar (via Doha), based on travel in June 2019. Turquoise Holidays, turquoiseholidays.co.uk, 01494 678400; constancehotels.com.