Italy’s transport minister has proposed a plan for diverting massive cruise ships from Venice’s historic centre, with a view to rerouting a third of the vessels by next year.

Danilo Toninelli told a parliamentary hearing on Wednesday that the ships could gradually be shifted away from the Marittima terminal and instead dock at Fusina, a small port on mainland Venice, or Lombardia, a privately owned terminal. The minister suggested that the rerouting process could begin in September.

Toninelli has been under pressure to come up with a solution after four people were injured when the 13-deck MSC Opera crashed into a wharf and tourist boat along the busy Giudecca Canal, the main thoroughfare that leads to St Mark’s Square, in early June. Weeks later the 12-deck Costa Deliziosa narrowly missed colliding with a yacht during a storm.

The incidents have revived protests against big ships and calls from residents to ban them from the Venice lagoon altogether.

Toninelli previously suggested diverting cruise liners to Chioggia, a port south of Venice. But a final decision would need to be made by a committee that includes the transport ministry and local and regional authorities. 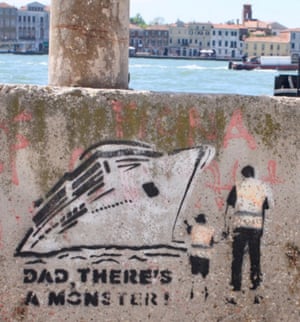 “These are Toninelli’s hypotheses … no official solution has been decided,” said a source at Venice council.

Nicola Ussardi, a member of the No Big Ships activist group, said: “There’s a lot of chaos surrounding the issue in general. But these are just declarations, nothing official.”

Toninelli, from the anti-establishment Five Star Movement, clashed with Venice leaders after he dismissed a solution agreed by the committee in 2017 without consulting them. The Venice mayor, Luigi Brugnaro, and Luca Zaia, the president of the Veneto region, have also been excluded from discussions about alternative proposals.

Nicola Pellicani, an MP with the Democratic party, said: “There is nothing concrete [in Toninelli’s proposal], either for transitory or definitive solutions. The promise that this will begin in September is impossible to maintain. The minister thinks he can move cargo and cruise ships from one side of the lagoon to the other, as if they were toy cars.”