Kuwait’s Jazeera Airways Co. laid off another 200 employees in September as the coronavirus pandemic continued to hammer demand for air travel.

The airline instituted cost reductions at every level of business, chief executive officer Rohit Ramachandran said. The layoffs, across all business lines but predominantly pilots and cabin crew, followed the termination of about 300 employees – a third of the airline’s workforce – in March. 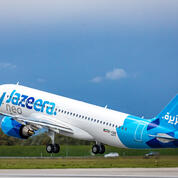 Tickets valued at $16.2 million can be used to fly to any destination in the airline’s network and are valid until the end of 2021

“We would love to have them back as soon as possible, once the situation improves,” Ramachandran said by phone after the airline reported a third-quarter loss of 5.6 million dinars ($18.3m). “As a prudent business, we have to look at all cost elements.”

The low-cost airline has also renegotiated leases with all lessors, “which gave us significant cost savings for the year”, said Ramachandran, who last month took his first salary since February. Other members of the leadership team took a 50 percent pay cut, while shareholders agreed to retain dividends due to them in the business, he said.

While commercial flights at Kuwait International Airport resumed on August 1, following an easing of restrictions after a lockdown in March, flights from 34 countries are still suspended. Jazeera ended the nine-month period with a cash balance of 23.3 million dinars.

Since the pandemic upended travel, governments around the world have been forced to step in and offer lifelines to their national carriers. Dubai-based Emirates, which has had to cut thousands of jobs, and Qatar Airways received $2 billion each. Etihad Airways has responded to the upheaval by cutting thousands of jobs and extending the period of reduced pay for staff until the end of this year.