Huntington Beach is the spiritual home of Californian surfing. I love strolling out early in the morning along Huntington Beach Pier, when the marine layer mist lingers, making everything seem mystical. All you can see are the silhouettes of hundreds of surfers, sitting, waiting for a wave. Watch them as you stroll along the 1,850ft-long pier, then head to Ruby’s, a 1940s-style diner at the end of the pier. Head upstairs and sit by a window looking out to the Pacific, to watch the dolphins and the mist slowly lift, drinking bottomless coffee and eating delicious pancake stacks.
Maddy Miller, London 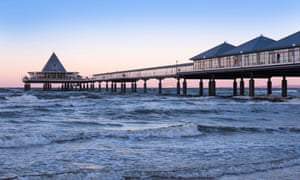 The island of Usedom, shared between Germany and Poland in the Baltic Sea, is a fantastic place to cycle. One of our rides covered the five-mile promenade linking the three imperial spa villages of Bansin, Ahlbeck and Heringsdorf. The last of these has an impressive pier (a relatively modern structure of glass and steel, replacing the original wooden one constructed in 1891, which was then the longest in continental Europe). We enjoyed its shell and coral museum, and ate in the space age-looking restaurant at the far end. You can rent holiday apartments on the pier, and Heringsdorf has fine golden sands – a lovely resort.
Kevin, Ilkley 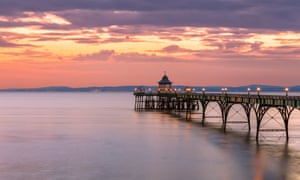 “The most beautiful pier in England” according to John Betjeman, and England’s only surviving Grade I-listed example, Clevedon pier is a gem. There’s a lovely tea shop at the end and a superb new restaurant that during the day offers delicious picnic-style food to eat on the pier, and at night becomes a classy food venue specialising in fish dishes. The Bristol Channel has the second-highest tidal range in the world, and watching the tide sweep in and out can be spectacular. You can spend a pleasant hour or so reading the moving and often funny memorial plaques. The paddle steamer Waverley is an occasional visitor.
Russell Richards, Clevedon 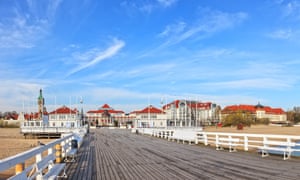 After two days’ walking around Gdansk in northern Poland weheaded towards the coast on a 15-minute train journey to Sopot. Sopot is home to Europe’s longest wooden pier. It is over 500 metres long and is dotted with classically trained buskers. As you walk out over the sea and turn to look back at the beautiful Polish coastline, you’ll see an art-deco hotel and cafes. Try it at sunset. too.
Ollie, Lisburn 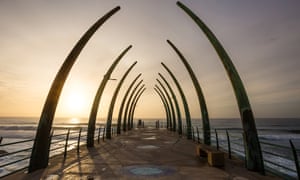 What Umhlanga Pier on South Africa’s east coast lacks in length, it more than makes up for in dramatic beauty. The whalebone archway makes for unforgettable photographs as you stroll along it, perhaps to watch sunset over the Indian Ocean. It hides a clever engineering project too: it’s an extension of an underground culvert that helps disperse storm water and has radically improved water quality in this tourist spot near Durban. There’s lots to do in Umhlanga, from watersports to fine dining, but the pier has to be the resort’s most iconic land-cum-water mark, especially when lit up at night.
Moira, South Wales

The Hague, the Netherlands 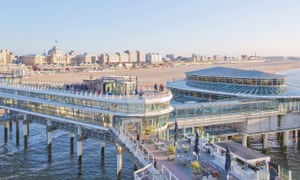 The most unexpected part of my visit to the Netherlands. Extending 400m over a wide strip of golden sand and flanked by beach cafes, a wide promenade and great shopping, the pier is home to a zipline, a ferris wheel and a bungee jump. If you prefer things a little more sedate, there are cafes and shops to browse. Festivals, cultural events, markets, kids’ afternoons, educational activities and musical performances are offered throughout the year. And if you want to make a night of it, stay in one of the beautiful suites, at the end of the pier, where you’re guaranteed a sea view and a great night’s sleep listening to the waves whispering up the beach.
Deborah Gilbody, Rushden 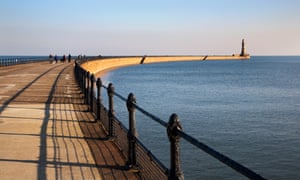 This newly refurbished pier is a gem. It looks like any other harbour pier on first inspection, well used by cyclists, strollers, sunbathers and people fishing. Recently it has undergone restoration so that you can now explore its tunnel, hidden within the pier itself, which runs to the lighthouse at the end. Where else do you get to go inside a pier structure? The views from the lighthouse are superb. And there is excellent fish and chips at the entrance to the pier.
• Entry to pier is free, tours of tunnel and lighthouse £6pp, rokerpier.co.uk
Anya Chapman, Bournemouth 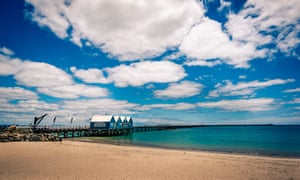 Reaching 1.8km into Geographe Bay in the far south-west of WA, three hours from Perth and close to the Margaret River wine region, Busselton Jetty is over 150 years old. Built on wooden piles, it was a major trading point for European settlers, servicing over 5,000 vessels during its working life. Now you can walk, or ride the miniature railway, to the underwater observatory at its farthest point. A day ticket is $4, which allows you to walk the jetty, and dive, fish or swim from it; the miniature railway and observatory cost extra. Better still, the jetty is open 24 hours and is free in the evenings and early mornings.
• busseltonjetty.com.au
Graham Sheath, York 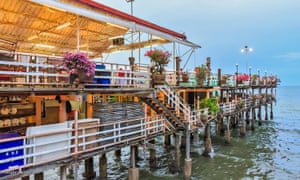 At weekends, Bangkokians drive 90 minutes south to Hua Hin, not just for the beach and sea but to eat freshly caught fish at what are known as the squid piers. These are wonderfully constructed long wooden jetties over the sea, lined with open-air restaurants serving reasonably priced dishes. I’d recommend La Terrasse, Chao Lay and Mee Karuna.
Helen Jackson, London 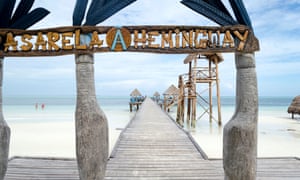 This idyllic pier is freely accessible from the beach and was a favourite fishing spot of Ernest Hemingway. And many thanks for the Hemingway-esque brevity of this tip … Sandra, Richmond