British Airways passengers heading to Cairo usually fly to the Egyptian capital on board a state-of-the art Boeing 787 Dreamliner.

But for several services this week, customers will find themselves travelling on an aircraft leased from a budget Belgian airline that is over 10 years old.

The British flag carrier has been forced to improvise because the 787s have been suffering issues with their Rolls-Royce engines and are being taken out of service to undergo additional inspections. BA will ‘borrow’ (in industry terms it’s called wet leasing) an Airbus A340 and its crew from low-cost carrier Air Belgium to run the services to Cairo until September 6.

The Dreamliner, introduced in 2011, is often regarded as the most comfortable passenger plane with a wide cabin, a ‘hospital-grade’ filtration system that provides cleaner air, luxury seats and sensor technology that can dampen turbulence.

In contrast, the Airbus A340 has been in service for 25 years and Air Belgium’s aircraft were previously owned by Finnair.

Air Belgium only began operations earlier this year, meaning it has yet to be rated by Skytrax, the airline rating body.

Customers travelling with the airline usually have to pay 20 euros for a ‘comfort kit’ including a blanket, pillow and toothbrush and toothpaste.

But British Airways says leasing the aircraft means that it will allow its customers to travel on their intended date.

A spokesman for the airline told MailOnline Travel: ‘We’re doing everything we can to make sure our customers travel as planned, in light of continuing issues with Rolls-Royce Trent 1000 engines which are affecting many airlines around the world. 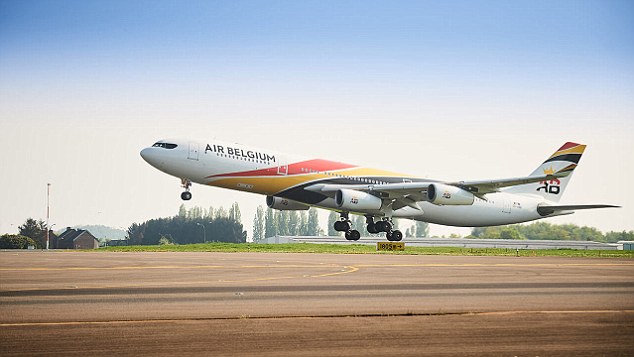 For several services this week, BA customers travelling to Cairo will find themselves flying on an Airbus A340 aircraft leased from a budget Belgian airline

‘In order to fly as many customers as possible on their original dates of travel, we have leased an aircraft from Air Belgium.

‘We are in touch with customers who are affected to offer them a range of options if they don’t wish to continue with their booking.’

On its website, British Airways states that there could be flight scheduling issues with Dreamliner services in the future as it continues to work with Rolls-Royce on the engine issues.

It is believed that up to 500 Trent 1000 engines – used on Boeing 787 planes owned by several airlines – are affected by the issues, which see components wear out earlier than expected.

Rolls-Royce warned in April that additional inspections on the power plants would result in some customer disruption.