Alaska’s so cool! Be bowled over by bears, whales and breathtaking glacier walks

First a rustle, then a snuffle. I looked down from the boardwalk and saw a black, furry bottom protruding from the bushes. Then another, and another and another.

A mother bear and her three cubs were moving off, following their noses in search of food. It was my first morning in Alaska and I had taken a bus 12 miles from the dockside in Juneau to see the Mendenhall Glacier. And here I was just a few feet from bears.

From the safety of the elevated wooden walkway I followed the four bears to open meadow where they got on with chomping grass and flowers, ignoring our excited whispers. 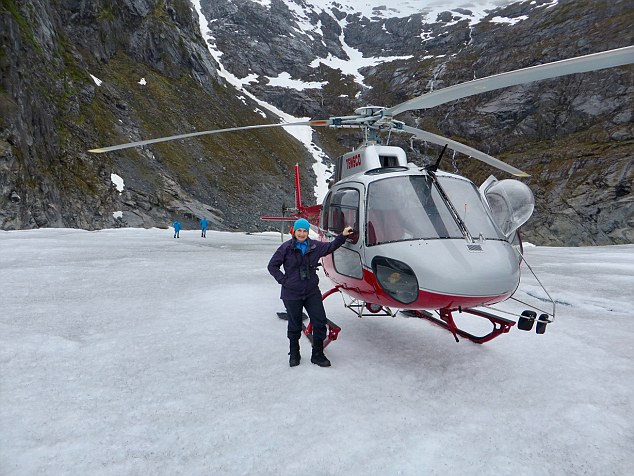 Caroline after landing on Herbert Glacier in a helicopter. The journey there took her over jagged peaks 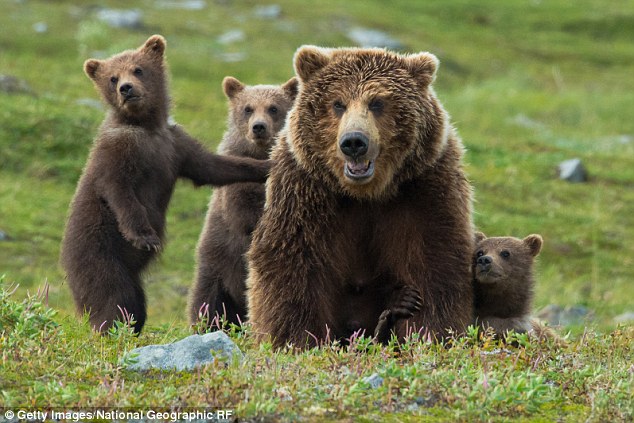 I had been in Alaska less than 24 hours and had already had a close encounter with bears!

Then a tantalisingly named Pilot’s Choice helicopter trip took us from Juneau’s heliport over jagged peaks to land gently on Herbert Glacier.

Walking gingerly in giant boots across ice strewn with bits of granite thrown up by its force, I stooped to scoop crystal-clear glacial water from a stream, cold, pure and delicious.

Our Alaskan adventure had started in Anchorage, where we boarded a chartered train to join our ship in Seward for a week’s cruise along the 49th state’s south-eastern coast, fjords and the Inside Passage to Vancouver. Arriving at Seward, it was a short walk from the train to gleaming white Silver Shadow.

We ran round our cabin and in and out of the walk-in wardrobe and bathroom with two basins and shower cubicle and bath tub, unable to believe how huge an entry-level balcony suite could be. An hour later lifeboat drill delivered another treat. 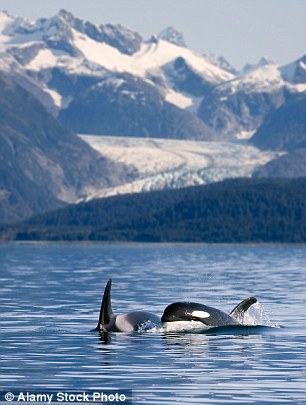 During her cruise, Caroline was lucky enough to see three killer whales

As we lined up on deck in our lifejackets, we watched the distinctive curved forms of a three killer whales, black dorsal fins cutting through the water, as they made their way up the sound.

It was on our first day at sea — a grey and rainy one cruising past Hubbard Glacier — that I noticed the ship’s magic ability to absorb people. A very high space-to-passenger ratio means the public spaces are never crowded.

The only time I saw a queue was at the ‘50s and 60s Rock & Roll Diner’, an American comfort-food buffet lunch in the bar on the last day of our cruise. Far more our style was the intimate French restaurant La Dame, where white-gloved waiters served us caviar and lobster bisque. Our cruise took us to the most popular Alaskan ports, Juneau, Skagway, Sitka and Ketchikan.

And when I realised there would be up to five ships in at the same time, including at least two vast resort ships spilling out thousands of people, I was dismayed. But I needn’t have worried, Silver Shadow always slipped in to the most central docking places, and we would wander ashore after a leisurely breakfast to find everyone else had piled into buses and scattered hours before.

In Skagway, said to be Alaska’s oldest town, we did a self-guided tour of the early 20th Century architecture, marvelled at the hardships survived in the Gold Rush Museum, and were back on board in time for a spa session followed by tea in the lounge.

We had a wonderful day in Sitka, fascinated by the wooden Russian Orthodox cathedral. It is an onion-domed reminder that Novo-Arkhangelsk, as it was known, was the capital of Russian America until Alaska was sold to the US in 1867.

Sea otters had been hunted almost to extinction by fur trappers by that time, but now, thanks to hunting restrictions, their population is healthy. On a small boat we saw a raft of sweet-faced mothers and pups chomping on clams.

But not before we’d seen sea lions and bald eagles with fish in their talons flying to their enormous nests on a nearby island. Then a humpback whale, bigger than our boat, appeared alongside. We watched awe-struck as it curved its back in an elegant dive, displaying a beautiful tail.

Back on shore we warmed up with clam chowder and walked to a wooded promontory between Indian River and Sitka Sound, the watery setting for a trail of 18 historic totem poles, tucked in sunlit glades, each carved with its own story. And anchored in the still bay we could see handsome Silver Shadow ready to take us on to the next day’s adventure.

Silversea (silversea.com, 020 7340 0700) has a seven-night cruise on Silver Muse from Seward to Vancouver, departing on July 4, 2019. The price is from £3,600pp in a Vista Suite with train journey from Anchorage to Seward, butler service, drinks, unlimited wi-fi and gratuities.