Want to break free? A weekend bopping along to tribute bands with fans at a Cheshire hotel will put a youthful spring in your step

Can you have too much of a good thing? If you had asked the balding, greying, young-at-heart punters at the tribute bands festival at Alvaston Hall Hotel last month, they would have given you a resounding ‘No!’ In fact, they would probably have set it to music and started a conga.

As we inch away from lockdown, and party animals crawl out of their burrows, attention has naturally focused on nightclubs heaving with sweaty teenagers. But make no mistake, the teenagers’ parents and grandparents want a slice of the action, too.

This establishment, in the heart of the Cheshire countryside, is one of a clutch of Warner Leisure Hotels dotted around the country. They offer adult-only breaks targeted at the older generation and have developed an impressive sideline in music-themed weekends. 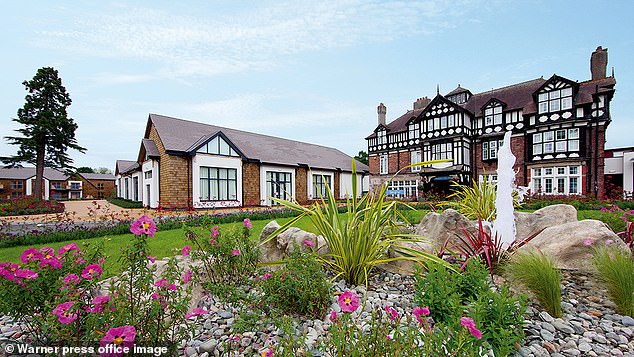 It’s a kind of magic: Alvaston Hall Hotel, which has developed a sideline in music-themed weekends

Occasionally the artists performing are well-known names, such as classical singer Katherine Jenkins, but mostly they are carefully crafted tribute acts by hard-working professionals who know their stuff.

Dolly Parton in Cheshire, Cliff Richard on the Isle of Wight, Rod Stewart in Herefordshire.

Of course, it is not the real Dolly, Cliff or Rod. But which would you rather? Great songs sung by skilled impersonators? Or rubbish songs sung by teenage wannabes? I rest my case.

At Alvaston, the tributes flew thick and fast. To Stevie Wonder. To George Michael. To Queen. To Elton John. To Abba. To Tina Turner. And a very good time was had by all.

We are not out of the Covid woods yet, so there were plenty of masks in evidence. But there was also a sense of normality returning. 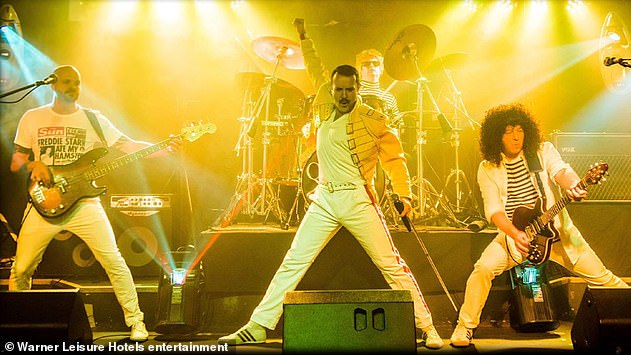 Alvaston Hall certainly exuded quiet sophistication. There was a small lounge for pre-dinner cabaret and late-night crooning and bopping, and a big main stage plus dance floor, where the main show of the evening took place in front of 400-plus diners still digesting their food.

The purist would probably say: ‘But you can’t watch Tina Turner strut her stuff in a skimpy skirt while you are eating a coconut cheesecake’ — but the purist would be missing the point.

It was the overlap between the excellent wining and dining and the full-on music that made the weekend so memorable. There was a hint of decadence in the air, people wanting to make the most of things.

For the performers, it was a chance to get back into the swing of things after a lean period because of Covid. 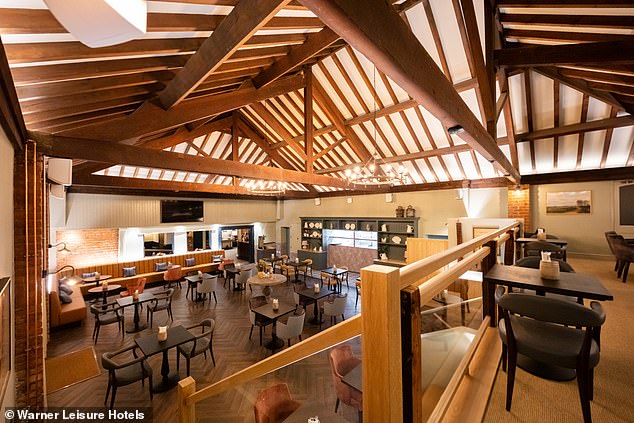 Max Davidson was impressed by ‘the excellent wining and dining’ at Alvaston Hall. Pictured is the hotel’s Cheshire Barn pub and restaurant

Wayne Denton, masterly as Neil Diamond, had the audience eating out of his hand with his self-deprecating patter.

‘I also do John Denver, but with a different wig, obviously. I was one of the finalists in a TV talent show in 1986. Seven of us are still working. One is a fireman, one is an electrician.’

For the guests, some taking their first holiday in 18 months, it was a chance to relax, recharge their batteries, meet up with old friends and be transported back to the sounds of their youth.

Joyce, from Ormskirk, Lancashire, is an Alvaston regular. ‘Warner have got these weekends just right. Great music in relaxing surroundings.’

Mark from Liverpool agreed. ‘Tribute bands stir so many happy memories. You are never too old to enjoy music. I used to come here with my parents when they were well into their 80s.’ 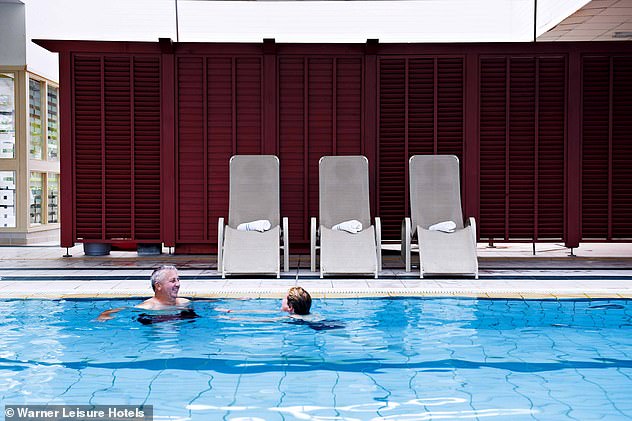 Guests can relax by the hotel pool by day, before enjoying Alvaston’s music evenings by night

Tony and Judy, whom we met at a wine-tasting, had a particular passion for American music and had travelled extensively in the U.S. They are in the autumn of their years now, but their passion for music was undimmed.

For my wife and me, whose tastes range from The Beatles to country & western and Irish folk singers, it was a chance to give full rein to our inner party animals after long months starved of live music. Nobody joined the singalongs with more gusto.

We were blessed with perfect weather, which only added to the sense of enchantment.

Other guests relaxed by the hotel pool or took part in the leisure activities that are part of the Warner package, from archery to quizzes to shuffleboard. The bars, naturally, did a roaring trade.

But come the cocktail hour, and through to midnight, we were all hot to trot, as fast as our old legs could carry us.

Is there anything to beat septuagenarian couples taking to the dance floor with their joy in life evident in every step? 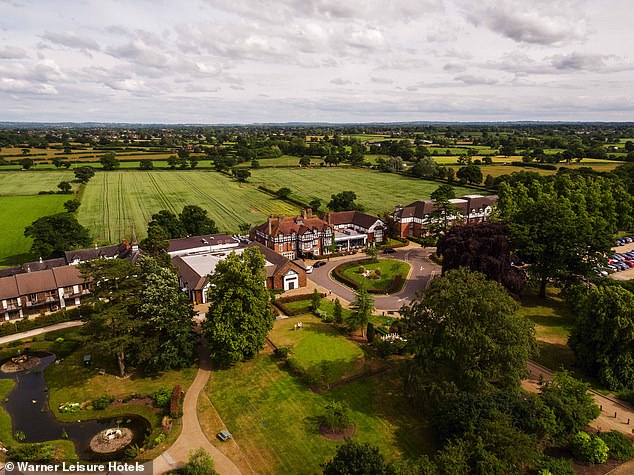 Alvaston Hall, pictured, is nestled in the heart of the Cheshire countryside

Three nights half-board at Warner Leisure Hotels, which has 14 adult-only properties across the UK, start from £319pp, including live music and activities. For more music breaks, visit warnerleisurehotels.co.uk.

Some wore smart casual, others were dressed to the nines, in seamed stockings redolent of World War II, or shirts so loud they threatened to drown the music.

But we would not have swapped the experience for a beach in Greece or a brasserie in Paris.

It was as if, together, we had grasped a simple truth: that sometimes the cheesiest, most familiar, most endlessly repeated songs are the best songs of all.

On the drive home, two hours after leaving Cheshire, my wife was still humming Dancing Queen and I was still yodelling, ‘Then I saw her face, now I’m a BE-LIEVER!’ like a Monkee on steroids.

And I am a believer, my belief fortified by this exhilaratingly unbuttoned weekend.

A believer, not just in music — but in the power of music to span the generations, cheat time and make the heart dance.