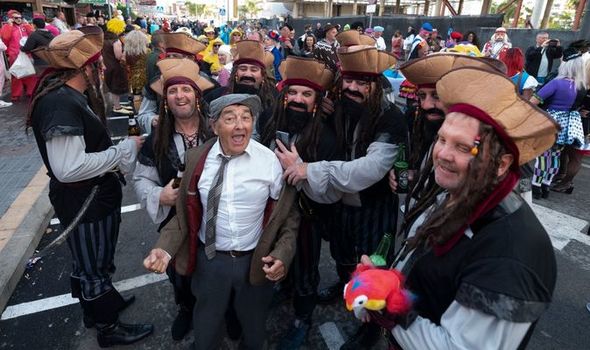 Around 20,000 British people are estimated to have been present at the huge street party in the Costa Blanca resort. Although the event had reportedly been cancelled this year, many tourists went ahead with their own unofficial party.

The Fancy Dress Party started in Benidorm around 20 years ago when a Spanish bar owner used to offer a free drink to anyone who dressed up.

Before the pandemic, an estimated 30,000 Britons travelled to the resort every year to take part in the festivities.

The party is one of many major fiestas normally held in Benidorm for local residents and tourists.

British revellers were photographed spilling out of bars into the streets as police monitored the scene.

“After a worrying start to the day with the rain, all came good and the sun even got his hat on for a few brief moments.

“A fantastic atmosphere and a great day had by all.”

The Corner Bar Benidorm posted: “Even with rain (Benidorm) is the best place to party on the continent.”

Many of the resort’s bars and restaurants had decorated their establishments with British flags and balloons.

However, although many British tourists travelled to join this year’s fancy dress event, several tweeted they were giving it a miss.

Claire Hannah tweeted: “Friend just messaged to say we should’ve been flying out to Benidorm tomorrow for the fancy dress festival.Think we’re being wise giving it a miss this time round.”

Lynn Fradders tweeted: “Today is British Fancy Dress day in Benidorm but sadly I’m not dressing up this year as I don’t want to risk mixing with thousands of people.”

The official celebrations were toned down this year due to the ongoing pandemic and rising Covid rates.

According to local media, an official firework show and float parade was held earlier on in the resort.

Some local Government officials have recently blamed tourists for a rise in Covid cases in Benidorm.

The resort has even started offering tourists vaccinations in the busy hotel area to try to decrease rates.

Toni Mayor, head of HOSBEC hotel association, said: “We have to keep reminding the British to put their masks back on. Some of them get confused because in Britain you don’t have to wear one.”

Face masks are still required in enclosed public spaces in Spain and in outdoor areas where distancing is not possible.

British tourists will also need to wear a mask on public transport including buses, trains and trams.

The Costa Blanca region does not currently have a Covid passport system although other Spanish tourist hotspots including Tenerife are considering introducing the document.