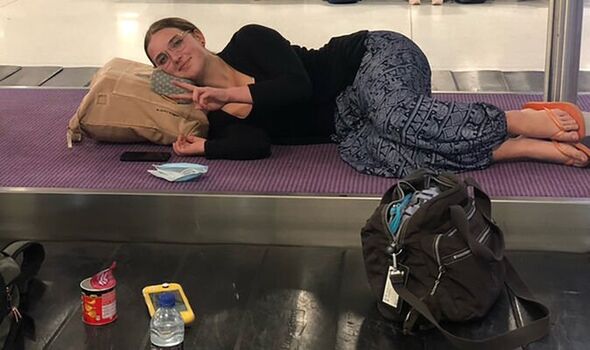 Tourists described scenes of “complete chaos” at Terminal 2 with “hundreds” waiting to collect their bags and suitcases. Families waited for five hours in the hall while other angry passengers were told their belongings would be sent to their home addresses in as many as four days.

Tracy Williams, 55, landed on a Tui flight from Fuerteventura at 1am in the early hours of Sunday with daughter 14-year-old Evie.

“I just thought it was absolutely outrageous. These are people’s belongings, you know,” Tracy said.

“There were distraught kids all over the place, people who needed medication that was in their bags.

“There was just one staff member at the desk who was having to deal with it all.

“Ironically we kept hearing this message, a security alert on a loop saying ‘remain with your bag at all times’ which really took the biscuit.

“We were given this form to fill in and they would return them hopefully in about three days’ time depending on where you live. You just had to describe your bags as best you could.

“You weren’t allowed to come back the next day and collect it either.”

The mum remains angry with the service. She said some passengers resorted to sleeping on the baggage carousel.

“This is a major international hub. They’ve spent millions on this new terminal and can’t even get the basics right.”

Gary, 46, arrived from Tenerife with his wife on a Tui flight from Gran Canaria at 12.20am on Sunday.

The man, from Stalybridge, Greater Manchester, initially waited two hours but then decided to leave after he was told it would be at least another two hours until his bags made an appearance and that even then they could give no guarantees.

An announcement made in the baggage hall asking people to fill a form in in order to have their luggage delivered, said that the issue was due to “staff shortages” Gary said.

The airport has since said the delay was caused by “issues experienced by one of the handling agents”.

Gary said: “As soon as we walked through, there were just bags everywhere.

“One conveyor belt started up and everyone was cheering so they must have been waiting a while. But we thought ours can’t be that long.

“But an announcement was made and it said we can’t currently get your bags and we can’t give you a time either.

“It said the airport duty manager had said they could take our details and get the bags sent to us.

“We don’t live too far away so thought we’d wait as they always turn up eventually.

“But by 2:15am they were saying it would be at least 4am. So we decided to leave at that point.

“Our taxi had been waiting since we landed and had had to pay for parking.

“One guy was front of house handling everything and fair to play him he did well as people were getting pretty irate.

“We were told they should be with us by Monday or Tuesday if you live local but there was a woman from Hull and she was told it could be Wednesday or Thursday. I asked if we could come back and get it tomorrow and they said no they don’t have the staff for that.

“I’m pretty annoyed to be honest. They never mentioned any compensation. But I’m going to be contacting the airport and asking for the money for the parking back.”

A Manchester Airport spokeswoman said: “We are aware that due to issues experienced by one of the handling agents operating at Manchester Airport, some passengers had to wait for an extended period of time for their baggage to be delivered on Saturday evening.

“We want all passengers arriving into Manchester to have the best possible experience and will continue to work with our handling agent partners, who manage the baggage process, to ensure it is as smooth as possible.

“We apologise for any inconvenience caused.”

A Tui spokesperson said: “We’d like to apologise to customers whose flights and baggage were delayed on a small number of our flights returning to Manchester Airport this weekend. We did everything we could to resolve this as quickly as possible with the airport and our handling agent, but we understand how frustrating this was and are very sorry for the inconvenience caused.”