For as long as I can remember, I’ve been waiting for the chance to travel on Black Watch and discover why it is such a firm favourite with Fred. Olsen fans.

The ship was built in Finland in 1972 and named the Royal Viking Star. It was rated at the time as one of the five most luxurious ships in the world.

She joined the Fred. Olsen fleet in 1996, when she became Black Watch. Just like Cleopatra, it seems that age cannot wither her, nor custom stale her infinite variety. 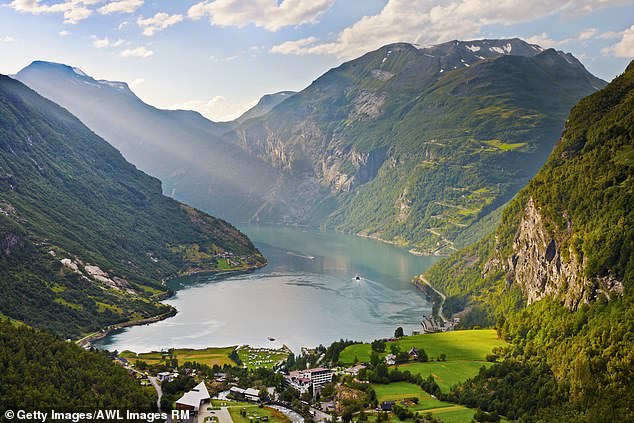 Glorious: Geirangerfjord – one of the stunning spots that passengers experience on the cruise

I have sailed many times south from the UK, usually from Southampton to the Mediterranean, but this was my first venture northbound, leaving from Liverpool.

It’s only when you sail to the very top of the UK that you begin to realise how little of our own country we know or have visited.

Liverpool may be described as a ‘Northern’ city, yet it is barely at the midpoint. (As the crow flies, Liverpool is 270 miles from Southampton, but 480 miles from Wick at Scotland’s northern mainland extremity.) As I bade farewell to the home of the Liver Birds, I hurried below to begin my explorations.

This nine-night sailing was the perfect chance to get the measure of a much-loved vessel.

Fred. Olsen has not been resting on its laurels. Black Watch enjoyed a substantial, multi-million-pound refurbishment two years ago, which gave the ship a new, yet traditional look. The public areas have been redesigned and updated, and all 423 cabins have been refurbished.

From Liverpool it takes two days to reach the coast of Norway – plenty of time to explore the ship’s various nooks and crannies.

This serene couple of days offered a calm before the sightseeing storm. I had explored the coastal charms of Alaska but I would have to say they are small beer in comparison with the epic splendours of Norway. 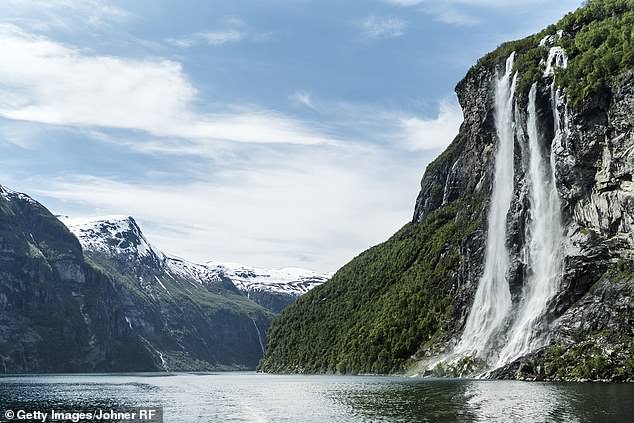 The stunning Seven Sisters Waterfall. Doreen says: ‘All you can do is stand in open-mouthed astonishment’

A scenic appetiser is served with a gentle cruise of glorious Geiranger-fjord en route to Hellesylt and the chance to gape at the spectacular Seven Sisters waterfall: all you can do is stand in open-mouthed astonishment.

On arriving in Hellesylt I explored the surrounding mountains, valleys and trails – the Hellesylt waterfall is unforgettable: also worth a look are the Tystigen glacier and Hornindalsvatnet, Europe’s deepest lake.

So the pattern is set for each day of discovery: Sunnylvs- fjorden, Olden, Nordfjord, Hornelen and – my favourite – Flam – with a glorious train ride up the sunbathed mountains to visit another spectacular waterfall.

So after calling at Naeroyfjord and Bergen, we were homeward bound, alas. There was one more treat in store: we called at Lerwick in the Shetland Islands, one of the highlights of the trip.

Now I’ve discovered the magic of Black Watch… and I’ve joined the club of devoted fans!

Join Fred. Olsen and see the world with two outstanding longer-voyage adventures.They are Black Watch’s 107-night Around The World With Sydney At New Year, sailing on November 12, 2018; and Boudicca’s 168-night Grand Voyage in October 2019, which is set to be the longest sailing ever undertaken in Fred. Olsen’s history.

Both feature in the new Venture To The Four Corners Of The World brochure, designed to whet the appetite of even the most seasoned travellers.

Black Watch will then transit the Panama Canal before sailing to Australia via South Pacific islands including Tahiti, Bora-Bora and Tonga. In Australia, the extended stay in Sydney has been timed to celebrate New Year.

On the Asian leg, ports of call include Indonesia’s Komodo Island – the untouched habitat of the world’s largest lizard – and Singapore. On the homeward leg, stops include Mumbai, Dubai, Salalah, Oman and Aqaba.