Sometimes it is shocking how very high and hard two boys can bounce on a luxurious, many-cushioned cream sofa.

Particularly when the sofa is surrounded by an exquisite array of sculptures, vases and floral displays, and the boys — my sons, Freddy and Sandy — are horribly over-fuelled on plane snacks and lollipops.

But as they leap and laugh in the magnificent foyer of the Terre Blanche Golf Resort, there is no flinching, no tut-tutting by the smart-suited staff.

They don’t seem remotely bothered. Instead, they smile and offer them another sweetie, a beautiful straw trilby hat each and an activity pack. 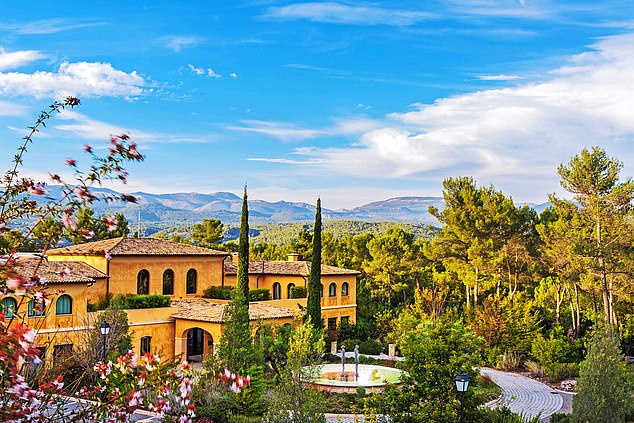 Charm: The Terre Blanche Golf Resort (above) in Cote D’Azur has 115 suites and villas

I wouldn’t normally take two energetic boys of five and six to a hotel in the Cote D’Azur — playground to the rich and famous, favourite of Dame Joan Collins, Bono, Bill Gates and Sirs Elton John and Sean Connery. This is an area of romantic, lavender-scented, cicada-filled beauty, for goodness’ sake.

Over yonder are the exquisite medieval hilltop towns of Fayence, Seillans and Tourettes.

At the other side are the super-yachts and sunseekers of St Tropez harbour, where only the super-rich would dare browse in the Italian cashmere shops.

But Terre Blanche does, after all, call itself as a family resort. And this is a half-term treat.

At first glance, it looks like the most non child-friendly hotel imaginable — £40,000 Versace carpets in the breakfast area! A privately owned art collection worth millions, Michelin-starred restaurant, two championship courses and a golf academy.

‘Oh Lord!’ says my husband Miles. ‘This is going to be torture. We should have left them at home and come on our own.’ Too late. But it is gorgeous, even in the rain. And once you get your eye in it turns out that, beyond all the cream upholstery and gloss, it is a family hotel with many thoughtful touches. There’s a games room for teens (and our boys) with air hockey, table football, Xbox games — all free and hugely encouraged at gin and tonic o’clock.

Tucked out of the way under vines are pizza restaurants and chicken rotisseries. But most importantly every morning, at 9.15am sharp, a pristine white, elongated golf buggy arrives to pick up an array of overexcited kids and drive them a mile or so to a little bit of heaven on the other side of the 750-acre resort.

The Kids’ Club is enormous, brilliant and fun, with an extremely dedicated and multilingual staff, football area, iPads and, naturally, its own pool.

The boys love it, obsess about it when they’re not there, so eventually we just give in and leave them to it. Which means we have time for a swim in the spa pool, a round of golf (for Miles), a facial (for me), a bike ride and a potter in the local markets admiring towers of cheese, honey and fat warm tomatoes. 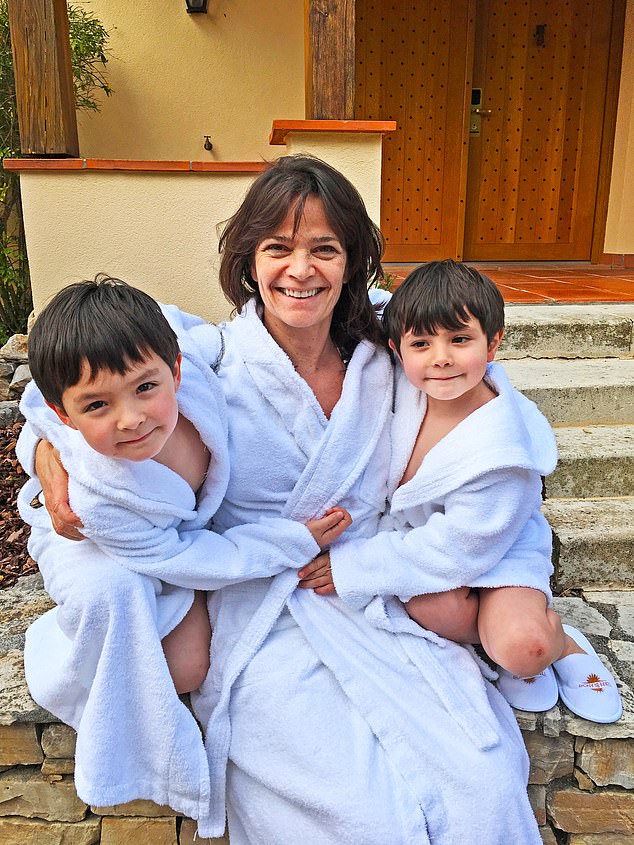 Family fun: Jane pictured above with her two young sons on their holiday

Sean Connery loved the area so much he bought the Terre Blanche estate (originally owned by 18th-century aristocrat Charles Bouge) back in 1979 but failed to navigate the nightmarish red tape involved in building a golf course and hotel in France.

After 20 years, he gave up and sold the land to German software tycoon and art collector, Dietmar Hopp, who succeeded where 007 failed.

The resort opened in 2004 and, after a brief collaboration with Four Seasons, Dietmar took it back under private control to ensure a more personal touch.

There are 115 suites and villas in Provencal style, and endless pools. Indeed, in good weather it would be impossible to pull yourself away from a pool, but we hit an unusually rainy week so we take a day trip to nearby Grasse — the world’s perfume capital.

We pop into the 12th century Cathédrale Notre-Dame-du-Puy de Grasse where Miles dismisses the three resident Rubens masterpieces with an airy ‘not really my cuppa’.

Somehow, when we return to Terre Blanche’s rolling acres and interior splendour, it actually feels like home. Particularly when the boys race to hurl themselves like plump little seals into the vast 40m outdoor infinity pool, heated to tropical temperatures, even on a rainy Tuesday.