A Jersey cycling trip? It’s electric! Exploring the charming Channel Island is easy… when you’re on a bicycle that does all the work

The popularity of e-bike hire sites across the globe suggests they’re here to stay – and with an electric motor that kicks in when the going gets tough, it’s easy to see why.

The latest example is EVieBikes (evie.je) on the Channel Islands. The bikes are wonderfully easy to hire – locate your nearest one using the Freebike app, register a credit card and take to the road. Using the app, riders can pause their usage, allowing them to hop on and off at will, so paying only when on the go.

A gentle pedal along the bike paths fanning out from the seafront in Jersey’s capital, St Helier, is a great way to get your bearings, especially if you’re on the island for a long weekend. An ideal base is The Club Hotel & Spa near the harbour, where there are plenty of reasons to stay put, including a gorgeous spa and its Michelin-starred Bohemia restaurant, where eight-course tasting menus start from £95pp. 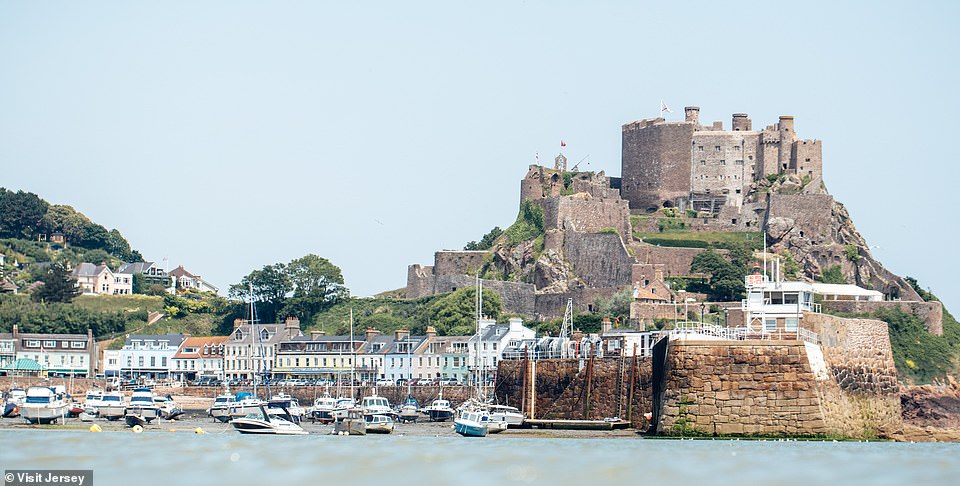 Pedal towards the fishing village of Gorey via the coastal parish of Grouville and you’ll pass pastel-daubed tributes to mid-century modernism nudged up against bright white villas straight out of Palm Springs.

Make your first stop the lizard-flecked Mont Orgueil Castle, built in 1204 by King John who wanted an impenetrable fortress to defend the island from attacks by the French. It’s packed with weird and wonderful exhibits, including a model of a uroscopy colour wheel – a device used by castle doctors to diagnose maladies by comparing a urine sample to 20 vials of coloured liquid. While ‘beautiful gold’ apparently signifies healthy digestion, hopefully you can’t relate to the purple vial, which would, according to an ancient doctor’s manual, indicate ‘imminent death’.

Next, head inland along country roads which in summer are heavy with the scent of hydrangeas. A network of Green Lanes – routes where cyclists, walkers and horse riders have priority over cars – connects popular destinations, including The Botanic Gardens at Samares Manor, where flower-filled gardens surround an ancient, turret-like dovecote. 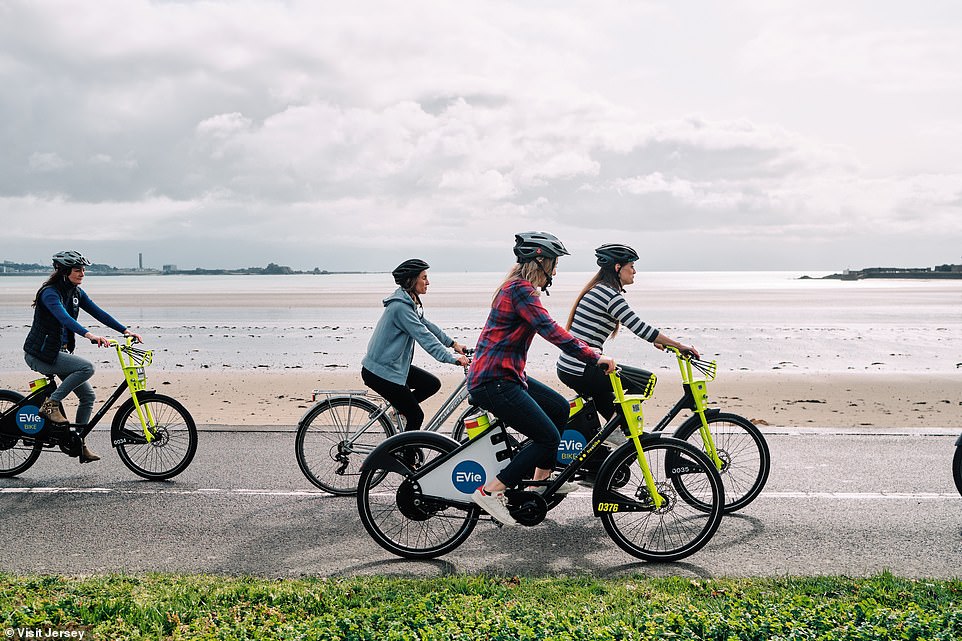 The gardens are a beautiful tribute to Jersey’s balmy climate – the banana trees, ginger lilies and bergamot would struggle elsewhere, but here they thrive. There are rare apple trees grown from cuttings belonging to the National Trust’s archives, and, in the Medieval Garden, herbs such as mullein, which has been used for its pain-relieving properties since the 11th Century.

Another advantage to a bike-based exploration of Jersey is that plenty of exercise will offset the delicious foodie charms of the island. At least, that’s what I tell myself over a plate of French macarons at Off The Rails, a cafe in the parish of St Brelade. It’s next to the Railway Walk, a cycling and hiking trail in the footprint of the railway track which once wound its way from St Aubin to La Corbiere Lighthouse, built in 1873.

Other culinary highlights include crab salad with mustard ice cream (sounds odd but it works) at Bohemia and, at No 10 Jersey, the sourdough-crusted brill. At El Tico, a restaurant and surf school which opened above St Ouen’s Bay in 1948, it’s the salt and peppered calamari, wolfed down before a barefoot exploration of the beach below. 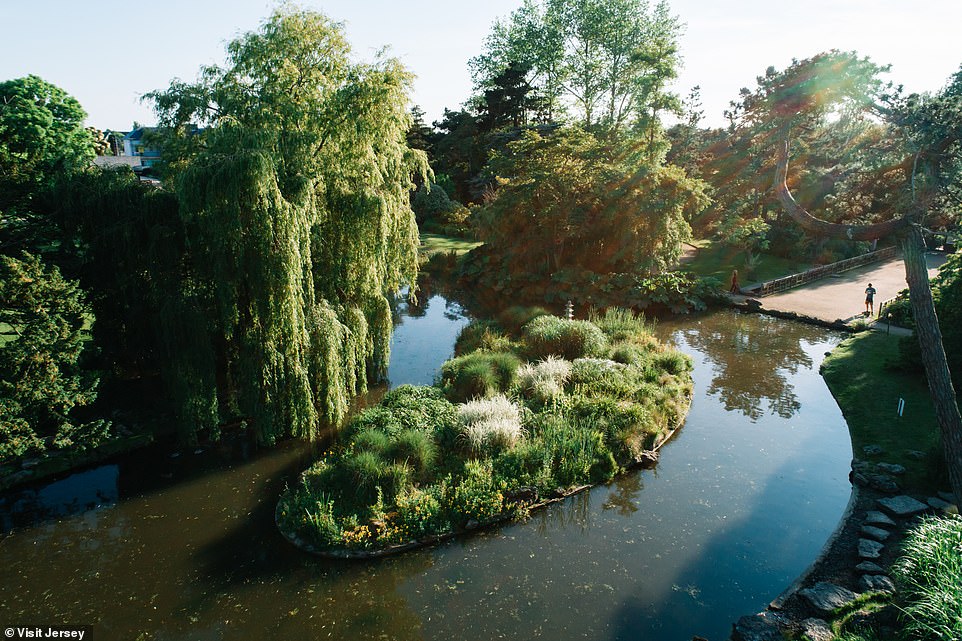 Tamara Hinson was a guest of St Helier’s Club Hotel & Spa, B&B from £129 per room per night (theclubjersey.com). British Airways (britishairways.com) has flights from Heathrow to Jersey from £33 one way. EVie bikes cost £1 per ten minutes for the first two hours, and are then free for up to six hours. Riders must be 14 or over. For more information, visit evie.je.

Given Jersey’s size – about five miles by eight – a pedal-powered lap is simple enough, stopping for sandy strolls along beaches such as the cavern-studded Plemont Bay. When the tide rolls in, locals fling themselves into the glass-clear water from barnacle-encrusted islands. Another favourite is Ouaisne Bay, where a narrow path streaks up the clifftop through a carpet of purple heather.

The bunkers and tunnels which pockmark the coastline are a stark reminder that the Channel Islands spent five years under German occupation during the Second World War. The German-built radio tower overlooking La Corbiere lighthouse is now a sought-after holiday rental, while the Jersey War Tunnels have more than half a mile of narrow passageways to explore. Exhibits recall the backbreaking excavation work carried out in the dark by 5,000 prisoners, who also dug out a 500-bed hospital.

In 1945, both the war and Germany’s occupation ended. It’s a moment memorialised in the centre of St Helier, where a statue unveiled in 1995 depicts jubilant islanders waving the Union Flag. Apparently the plan was to show locals celebrating by releasing a flock of doves – until historians pointed out that had there been an abundance of the birds, hungry locals, famished due to strict rationing, would have been more likely to cook up a dove stew.

It appears foreign invaders have not entirely given up on Jersey.

On the last day, I board Jersey Seafaris (jerseyseafaris.com) for a high-speed dash in an RIB boat across cormorant-topped waves to the tiny Ecrehous islands, five miles north of Jersey.

The majority of the islands are submerged at high tide, when seals perch on seaweed-draped rocks. Although there’s no fresh water, a dozen or so people own houses on them. And it was these islands which were the setting for the British Isles’ most recent invasion. In 1993, French fishermen arrived and, in a dispute over fishing rights, tore down a British flag. They were quickly sent packing – the latest in a long line of invaders desperate to bag a piece of Jersey. And let’s be honest – who can blame them?