Thomas Johansson used to coach Sean Connery (a gentleman off the course, but fiercely competitive on it, apparently). But he may find the Jeffries family on another level as we slug it out for the title of family chipping champ.

Thomas is director of golf at the La Manga Club in South-East Spain and is giving us a family lesson, which is hotting up by the minute.

The four of us are striving to post the lowest score in a game of chipping and putting on the practice green, miraculously lush under the spoiling Spanish sun. I’m secretly hoping to top the leaderboard, but there’s stiff competition from my wife, a furiously concentrating Jack, 14, and 11-year-old Jessica, who, at one point, succeeds in chipping 20ft right up to the flag and dropping the ball in the hole, before performing a victory dance and pronouncing the rest of us ‘losers’. 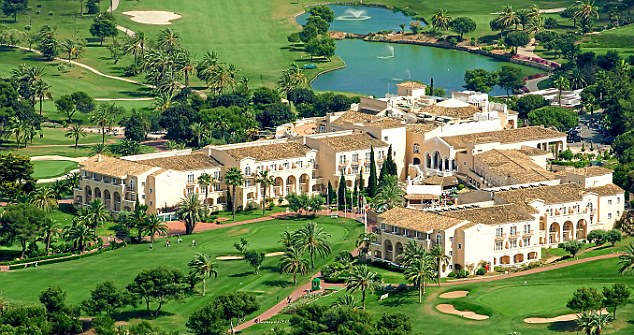 Getting in the swing: La Manga Club in South-East Spain offers all types of sport and plenty of creature comforts

Thomas — a Swede who also taught the King of Sweden’s sister and is an ABBA chum — is wonderfully patient, with constant quiet words of advice. He has coached the world blind champion and takes great effort to work with special needs children, too. A remarkable chap.

Golf is at the heart of the La Manga resort, which has three 18-hole courses and a smaller one designed by Seve Ballesteros, who was the club’s touring pro in the Eighties.

Rates are steep at €85 (£76) a round, but the courses are exquisite, studded with palm trees and wrapped around the hotel. We loved sitting on our balcony as the shadows lengthened, watching the travails of the players on the green below.

You can come and lie by the pool if you like, but it’s a sports resort and there’s just about everything you could want: scores of football pitches (where Chelsea run a children’s soccer school), oodles of tennis courts, gyms, a spa, pools and hiking.

La Manga is open all year and a great choice for the October half-term when it’s still hot but not boiling.

One day we stop off at Biking La Manga, where the bike-crazy Brit Geoff Cox — who’s cycled across Siberia and most of Africa — fixes us up with some wheels and gives us the lowdown on a route to two vast old gun emplacements on a cliff. Sited in the Twenties, they are a whopping 18 metres long. 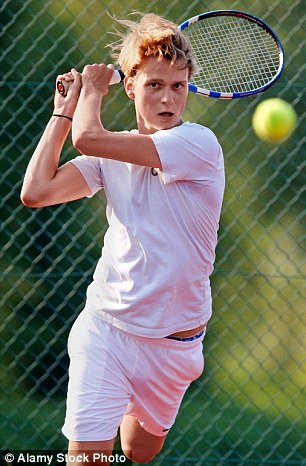 The resort has ‘oodles of tennis courts’

We pedal out of the resort through stands of olive trees and turn up a dirt road that winds its way two miles upwards through a plunging valley to the clifftop guns. Jack leads the peloton as though he is wearing the red jersey in the Tour of Spain, while the rest of us puff behind.

At one point, I am pedalling and wheeling Jessica’s bike while she takes a walking break, announcing grandly that it is too steep for a golf champion.

We stay in the Hotel Principe Felipe at the heart of the resort, which is also made up of hundreds of apartments and villas grouped in villages across the valley.

There are something like 15 restaurants, and half the fun is getting a minibus on demand from the hotel to try somewhere different each night.

We loved Luigi’s, an Italian up on the hillside under strings of lights. It’s a charming spot, but rather more sedate than the riotous time we had at El Bistro in one of the resort squares.

For €18 (£16) a head we have five flavoursome tapas dishes which are all the better for the live samba band which has the whole square grooving in their chairs then up dancing, from toddlers shaking their hips to grannies swinging around with abandon.

It’s worth spending some time out of La Manga, too. The ancient city of Cartagena, about half an hour by taxi, has a smartly restored 1st century BC Roman amphitheatre which is something of a whopper, but was only discovered and dug out about 40 years ago.

Quite how you ‘lose’ a 7,000-seater theatre is unclear. Jessica jumps up on stage declaiming lines from her school show like a pint-pot Judi Dench.

La Manga has a small, rocky private beach, but if you want to swim in the sea, get a cab for €20 (£18) to the sensational strip of land alongside the vast lagoon, the Mar Menor.

It’s miles long with glorious sandy beaches on both sides where the locals come to splash about. There is even a joyous public dance class on the sand in late afternoon. I swim for hours with the children, until we take evasive action when a foot-wide jellyfish drifts towards us and Jessica is out of the water like a shot.

At the southern tip of the Mar Menor is the marina of Cabo de Palos. It’s elegant, rather shabbily chic, and at Miramar restaurant right on the front we plunge into swordfish steaks at €13 (under £12) and a bottle of sparkling Chardonnay and feel nothing could be better than pleasure yachts cruise into harbour.

This time, the only chips we work on are dipped in lashings of mayonnaise.