Revealed: The B&Bs that cost up to £200 a night you can stay in for FREE – if you do some chores

Cash-strapped tourists can bag themselves a stay at an amazing B&B – without having to part with any money.

Sound too good to be true? It isn’t. Thanks to a new scheme called Barter Week, travellers will be able to stay for free in B&Bs that can cost up to £1,200 for a week’s stay, in exchange for tasks such as posting pictures on Instagram, gardening and teaching the owners how to make pizza.

So far 450 B&Bs from 60 countries have signed up to take part in the initiative, which is running from November 19 to 25. 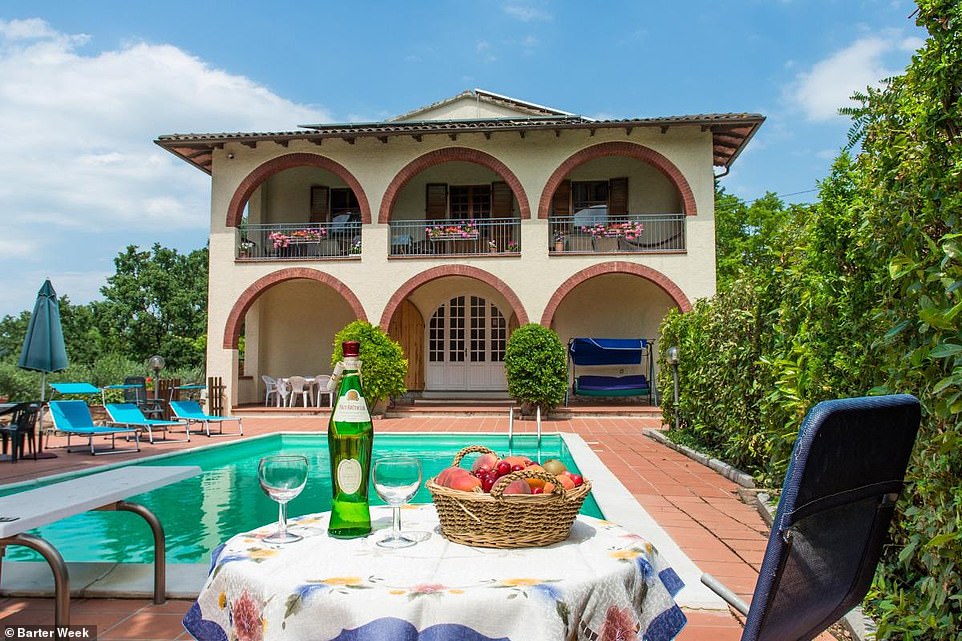 The Il Querceto B&B in Perugia is offering a free stay to guests who can help out with maintenance work such as plumbing, electrical work and masonry. Stays here usually cost around £100 per night 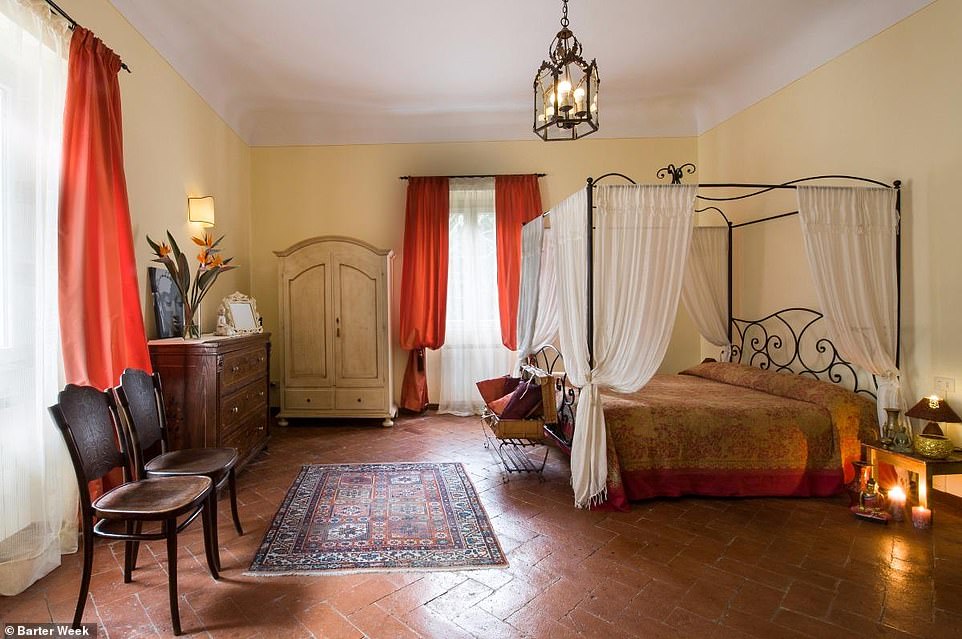 The Il Palagetto Guest House, pictured, in Florence, is willing to offer a free stay instead of the usual £94 per night to a traveller, who can help them set up a social media campaign on Instagram 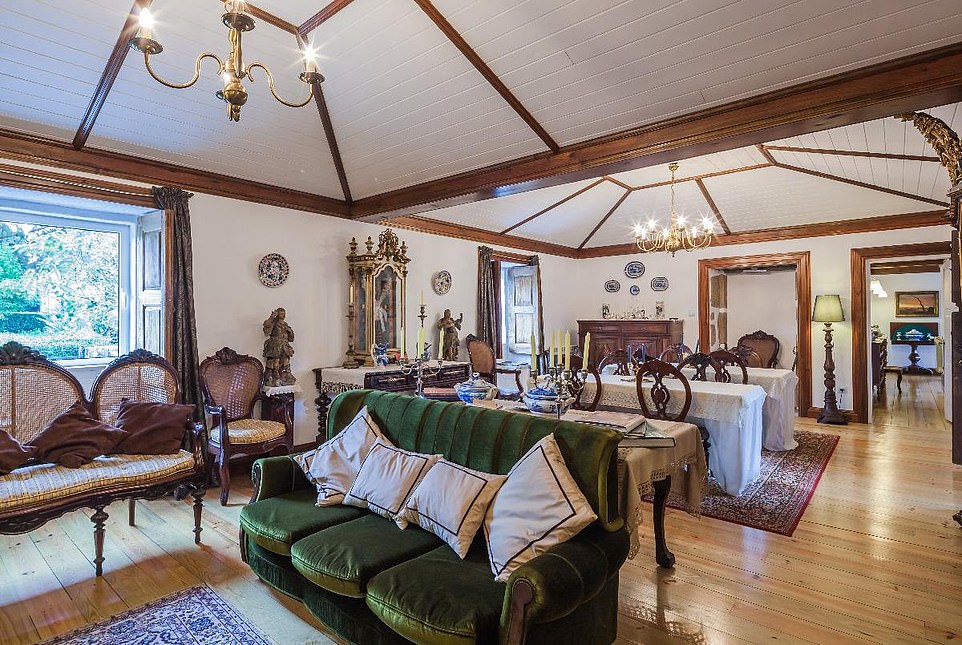 The stunning 1720 Quinta da Cancela country house near the city of Braga in northern Portugal, which is also signed up to Barter Week, meaning guests can save up to £100 per night. The owners are willing to accept guests who can help out with stone masonry and landscape gardening 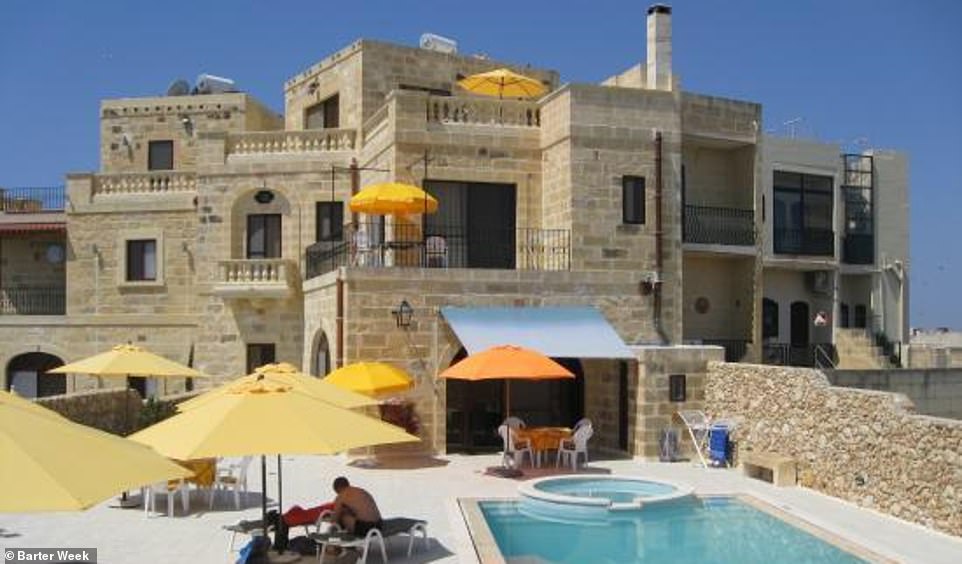 The owners of the Ferrieha Farmhouse on the island of Gozo near Malta say they would like a guest who can update their website or create a piece of art for the property. It is usually over £100 per night to stay at the property 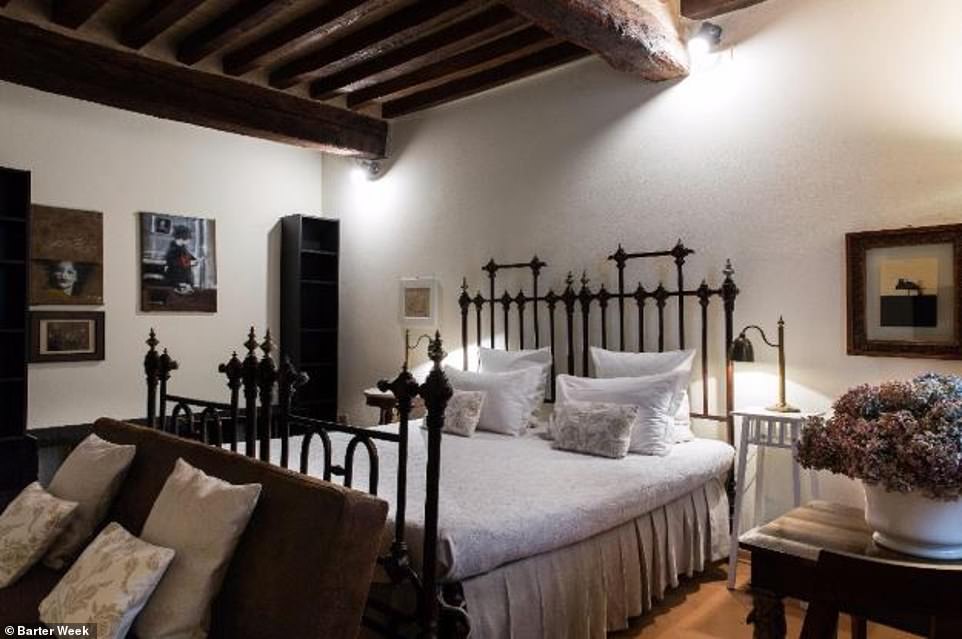 One of the bedrooms inside the Al Battistero d’Oro B&B in Parma, Italy, where rooms usually cost around £100 per night. During Barter Week, the owner will offer a free stay to guests who can film a promotional video for the accommodation

B&Bs wanting to take part in Barter Week upload images and a description of their accommodation online and suggest what they would like in return for offering the accommodation for free.

One stunning B&B offering free stays is the 1720 Quinta da Cancela country house near the city of Braga in northern Portugal.

The family-run property boasts its own vineyard as well as an outdoor pool and a balcony that has a beautiful view across the Portuguese countryside.

Stays usually cost around £100 per night but the owners are willing to accept guests for free so long as they can help out with stone masonry work or landscape gardening around the estate.

In Italy, the Il Querceto in Perugia usually offers stays for £100 per night in its converted farmhouse.

The B&B has a swimming pool as well as five spacious bedrooms that are surrounded by the lush hills of the Tiber Valley.

Free stays are up for grabs for guests who can help out with maintenance, such as plumbing, electrical work and masonry. 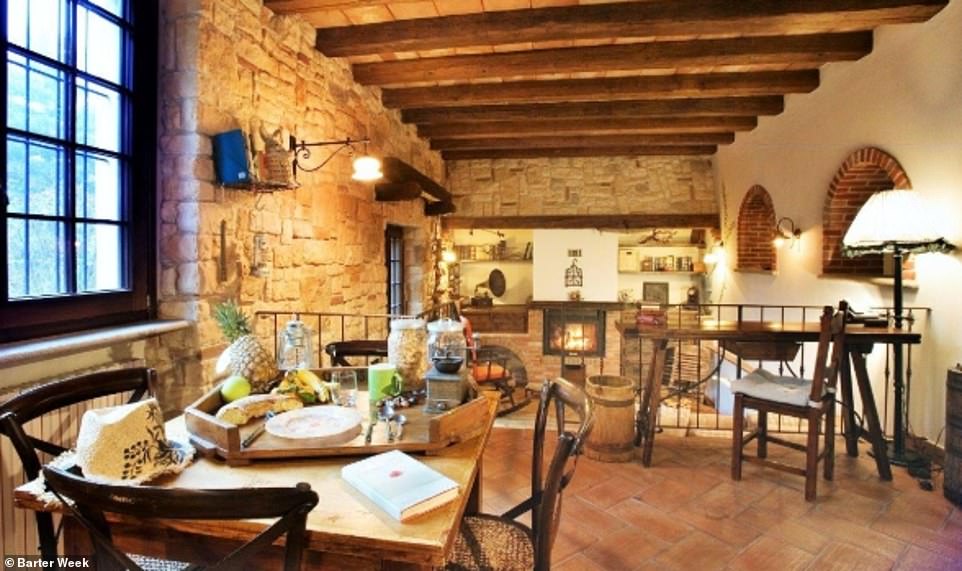 The Relais Cascina al Campaccio country house, pictured, close to Lake Maggiore in Italy is usually £67 per night, but the owners are open to any kind of barter offer 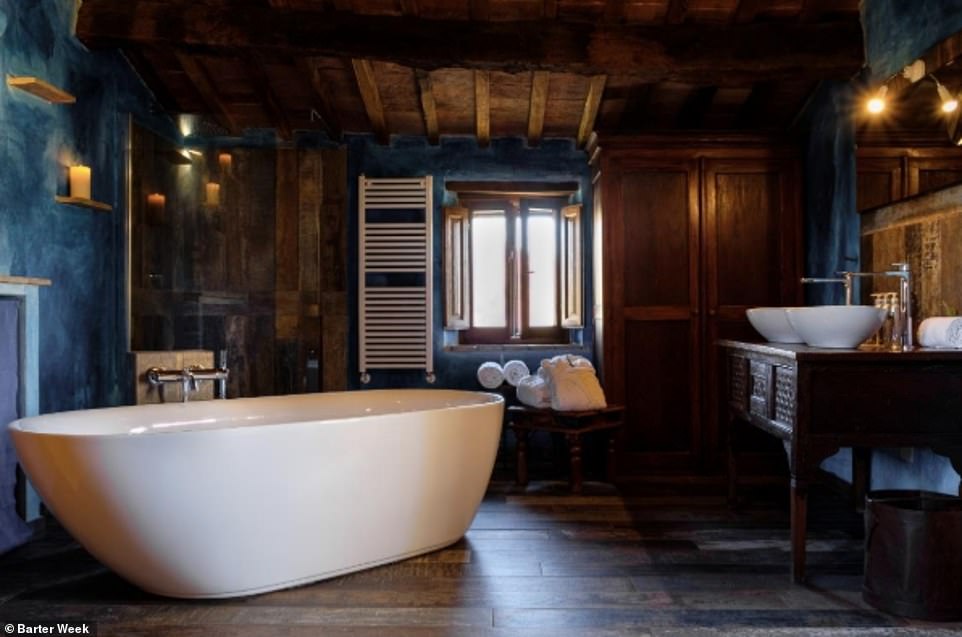 The luxurious bathroom inside the Sant’Egle Organic Farm accommodation in Tuscany, where rooms cost around £115 per night. The owners are willing to consider all offers. There are 316 B&Bs in Italy taking part in Barter Week 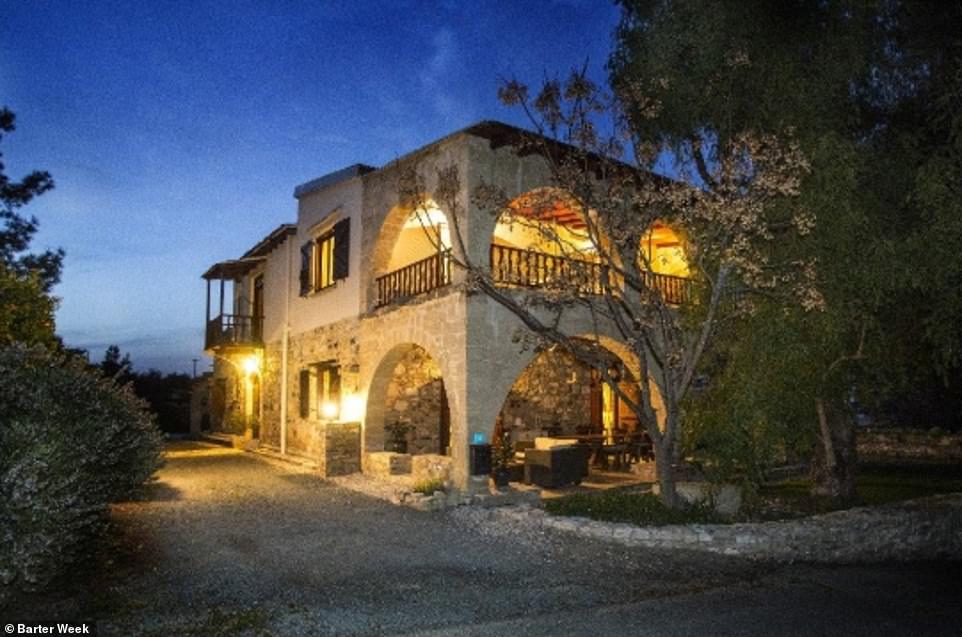 The owners of the Villa Menorah B&B in Larnaca, Cyprus, say they are willing to consider free stays for guests such as tree surgeons, chainsaw operators and those skilled in masonry repair. The usual rate is around £80 per night

One property in Malta taking part in Barter Week is the Ferrieha Farmhouse on the island of Gozo.

The farmhouse usually charges guests around £100 per night and it includes a large swimming pool and a wood heated sauna.

The owners say they will offer a free stay to a guest who can help update its website or create a piece of art for the property.

The Il Palagetto Guest House in Florence is offering a free stay during Barter Week to a social media expert who can create an Instagram campaign.

While the Al Battistero d’Oro B&B in Parma is offering a free room to tourists who can film a promotional video for the accommodation. 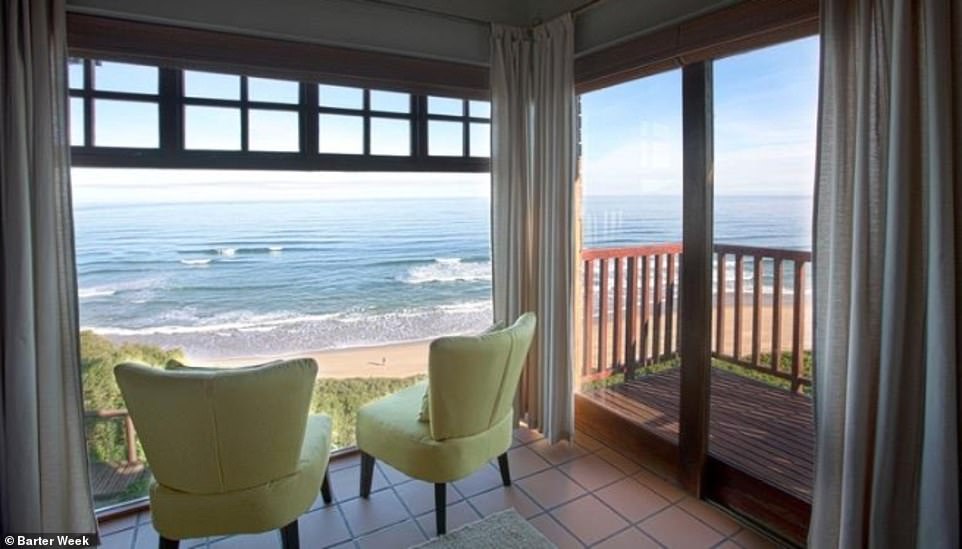 There is Barter Week accommodation available in 60 countries around the world, including South Africa. One example there is the Dolphin Dunes Guest House in the Southern Cape, pictured. Rooms here are usually around £120 per night 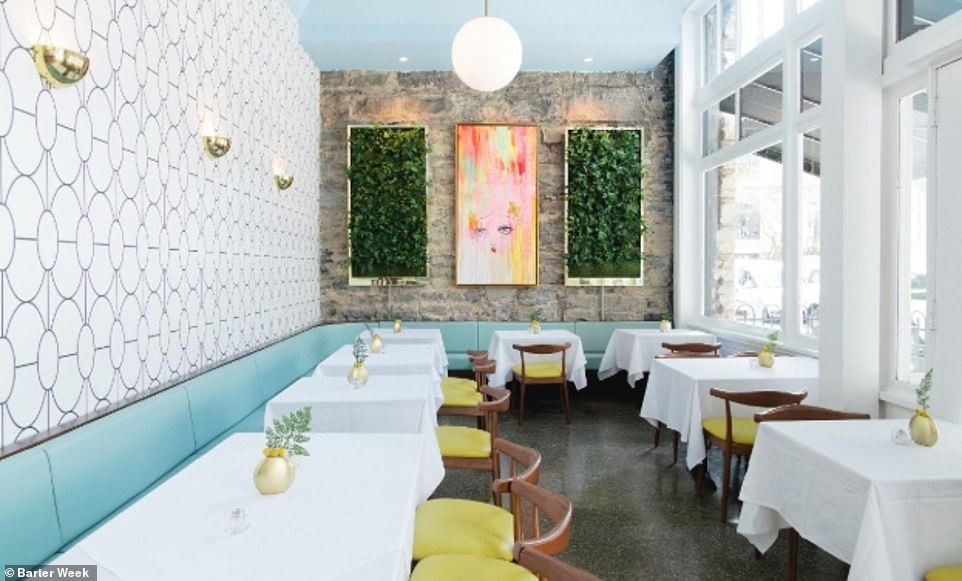 The dining room inside the Dwell Hotel in Chattanooga, Tennessee, where travellers can barter a deal for a room, which are usually around £200 per night. It is one of eight US properties taking part in Barter Week 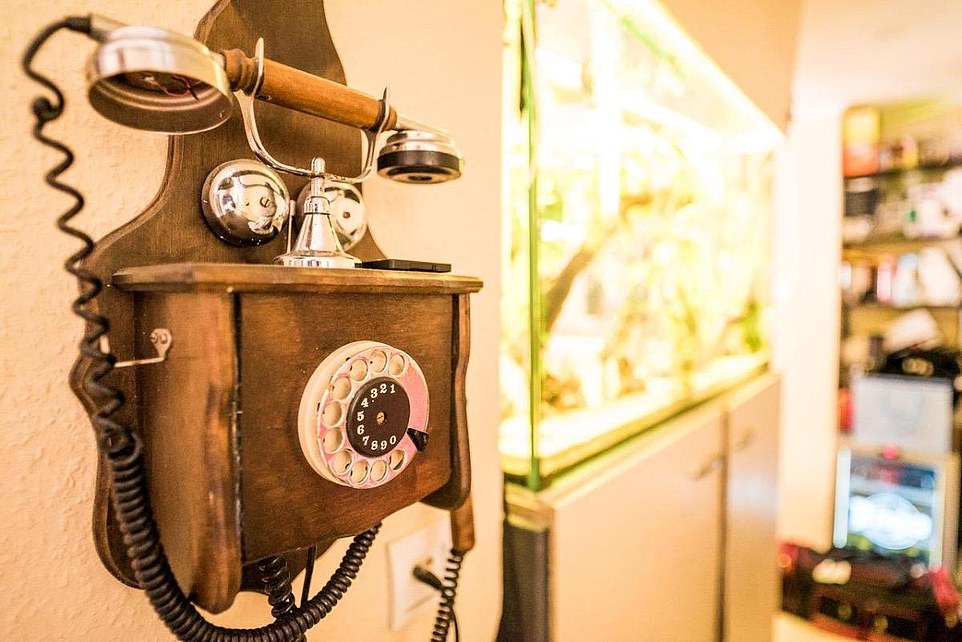 One of the quirky decorations inside the £29-per-night Hostel Kings n’ Queens in Zagreb, Croatia. The owners would like guests who can bring art such as antique furniture, paintings or clothing in exchange for a stay

Some of the B&Bs don’t have specific requests but tourists can stay at them for free by offering a barter of their own.

For example they might like to bring wine or homemade food, or perhaps teach a foreign language.

The type of accommodation on offer varies from luxury houses and hotels to spare rooms in people’s houses.

One of the biggest savings to be made is at the Dwell Hotel in Chattanooga in Tennessee, where stays are usually £200-per-night. It hasn’t made any requests but is open to a barter deal that would save guests £1,200 over six nights. 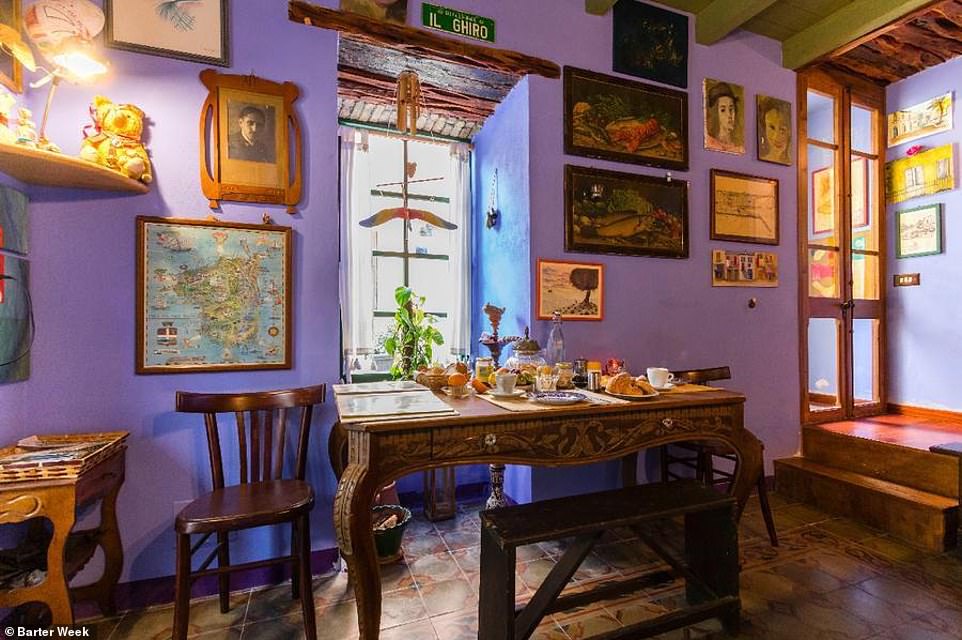 Il Ghiro Bed & Breakfast, a small three-storey house built in the 19th century is located in one of the oldest parts of Florence. A stay usually costs £43 per night 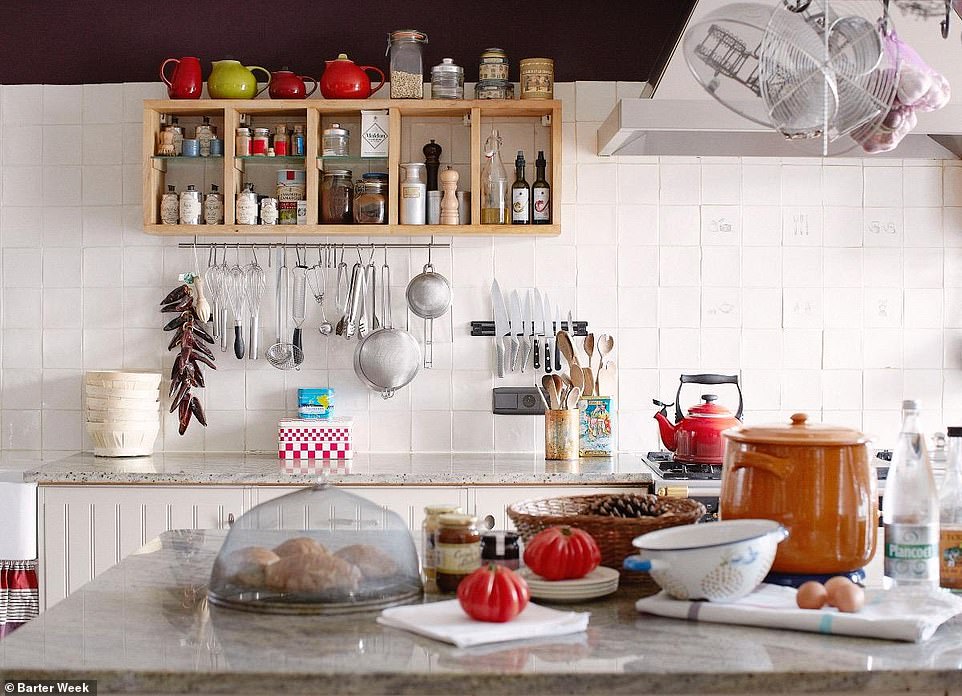 The impressive kitchen in La Maison Blanche aux Volets Bleus in Crédin, France. The owners would like guests who can teach them to make ‘the best pizza in the world’ instead of the usual price of around £150 per night 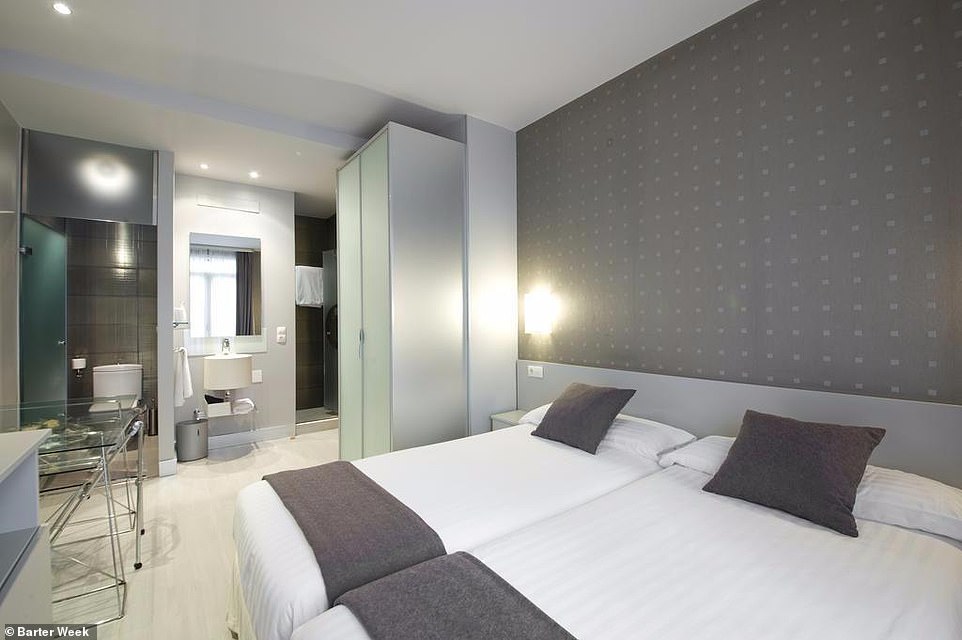 The owners of Ur-Alde, pictured, in San Sebastian in Spain are willing to accept stays from people who can offer them the same in return. It usually costs around £50 per night 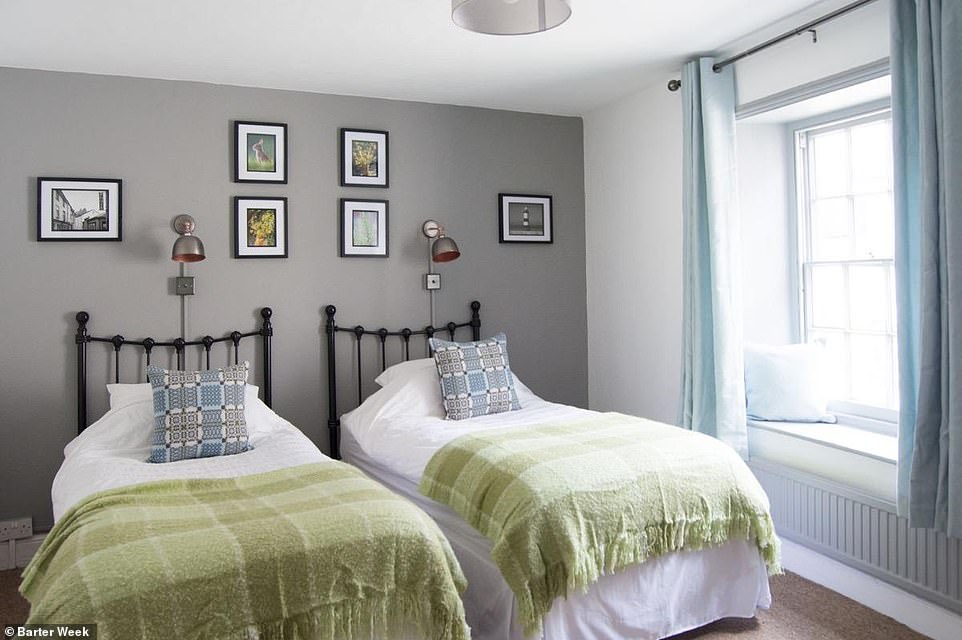 The rooms in The Crown pub in Aldbourne, Wiltshire, are £85 per night. The owners would like to swap with a B&B owner who can offer them accommodation for a skiing holiday 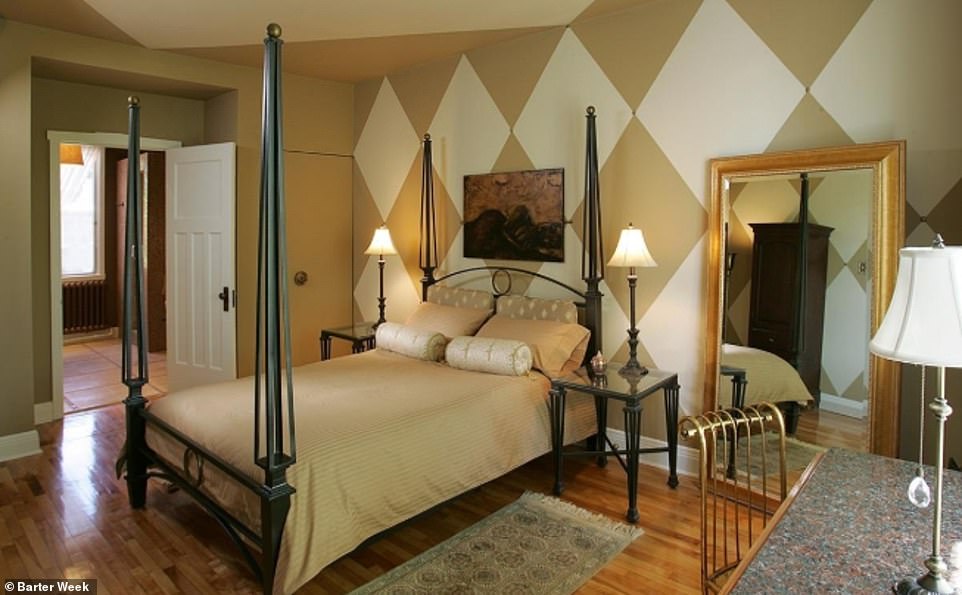 Guests wanting a free stay at Le Terra Nostra in Montreal, Canada, have to be willing to offer a stay at a property, preferably in South America. It usually costs £111 per night

While several other of the B&Bs taking part including Le Terra Nosta in Montreal, the Ferrieha Farmhouse in Gozo and the Dolphin Dunes Guest House in South Africa, usually offer rooms for more than £100 per night.

The idea for Barter Week came after the success of a similar scheme in Italy called La Settimana del Baratto.

This also sees travellers allowed to stay at certain B&Bs around the country without having to hand over any cash in exchange for skills or goods.

Barter Week is the first international version. Italy has the most B&Bs taking part, with 316 signed up. 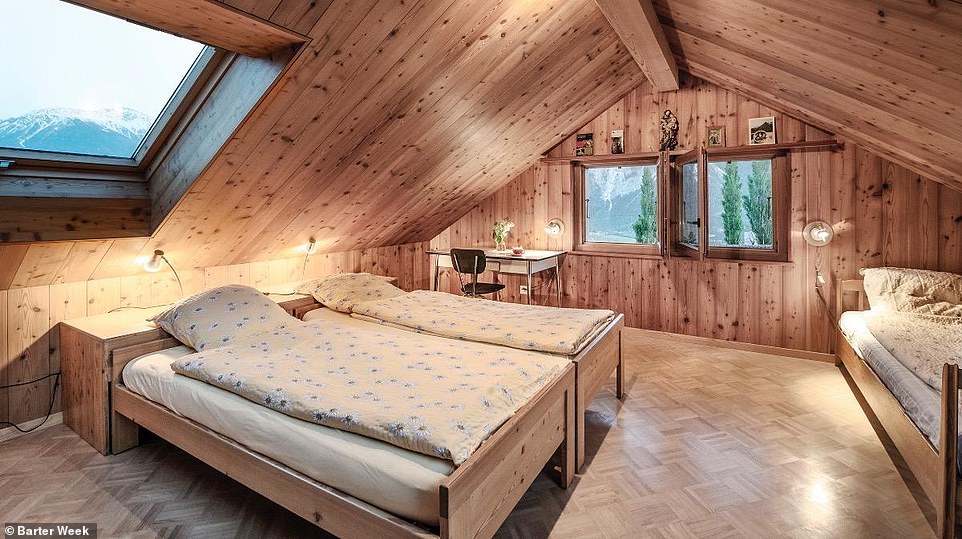 Inside the £80-per-night BnB Varen in southern Switzerland near the Italian border. The owners are looking for guests who can help translate its website into Italian and design a logo for flyers and ads 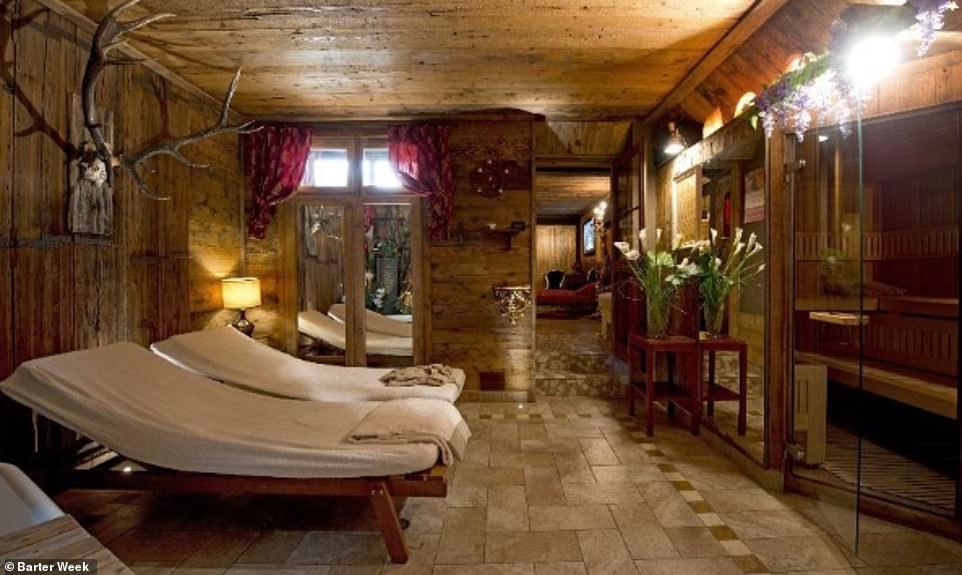 Le Fate Corbezzole B&B on the outskirts of Venice is a family-run property with rustic rooms and wood-beamed ceilings, with rates usually £97 per night – but they are open to all barter offers 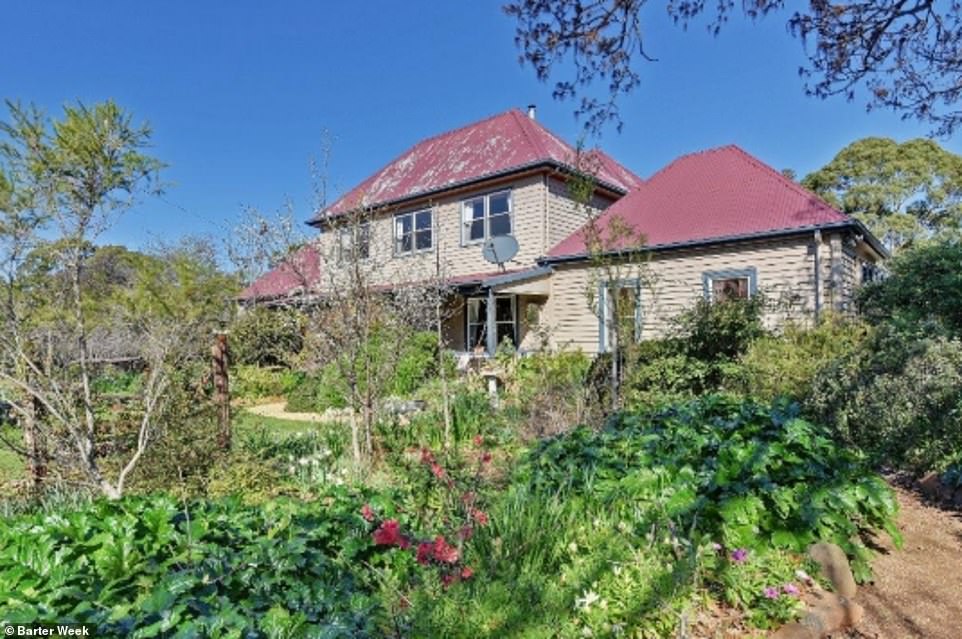 The only B&B in Australia taking part in Barter Week is Redcliffe House, pictured, in Hobart on the island of Tasmania. The usual price is around £97 per night

There are 19 properties in the UK, eight B&Bs in the United States and a charming colonial house in Tasmania, Australia taking part.

There are also B&Bs available in places such as Cambodia, Costa Rica, Fiji, Sierra Leone and Tanzania.

One of the most luxurious and expensive properties taking part in Barter Week is the Dwell Hotel in Chattanooga, Tennessee.

The boutique hotel is described as being a ‘swanky take on mid-century modern, where luxury meets retro’.

It boasts 16 rooms with huge bathrooms, along with an all-day cafe and restaurant.

Prices usually start from around £200 per night but the Dwell Hotel is open to any kind of barter.

The Sant’Egle Organic Farm is an eco-resort in Tuscany, that describes itself as a ‘zero impact’ destination.

It offers packages where as well as staying in the resort, guests are given yoga lessons, massages and lessons in making cheese.

The resort has been named as the best farm in Italy by the WWF for sustainability and conservation of biodiversity.

One night at the farm usually works out at around £115, but the owners are open to any kind of barter.

The Il Palagetto Guest House is located in the San Frediano area of Florence, just metres from the River Arno.

It has five bedrooms as well as a small library and is said to be in a great location.

Rooms at the Il Palagetto Guest House usually go for around £94 per night.

But the owners are willing to offer a free three-night stay to a guest who can carry out a advertising campaign on Instagram and also give the owners tips on using social media.

It also has a swimming pool and the owners offer cooking workshops for people wanting to brush up on their culinary skills.

And as the owners have just installed a wood-oven, they are open to barters from guests who can show them how to make ‘the best pizza’.

Alternatively, they will also listen to offers from travellers who can help with the gardening and translate their website into Spanish and Italian.

Le Terra Nostra is described as an upmarket B&B on a quiet street just 10 minutes from downtown Montreal in Canada.

The owner, Mirelle, decided to open the accommodation in 2005 after transforming her 1920s-style house and offering it to guests.

Stays at the B&B usually cost around £111 per night.

But the owner is offering a free stay to anybody who can offer her in a return a free stay at their accommodation.

She says she is especially looking for a B&B in South America.