Essex paddle steamers and Blackpool Tower when it was a ‘Wonderland of the World’: England’s seaside resorts captured in rare aerial images taken between the 1920s and 50s

Thanks to magnificent men in their flying machines, we can see the coastal England of yesteryear from a mesmerising perspective.

The pictures were taken between the 1920s and 1950s and are courtesy of the Aerofilms Collection, created by pioneering aerial survey company Aerofilms Ltd, which was formed in 1919 by First World War veterans.

Brodie said that the lockdown made delving into the Aerofilms Collection, acquired by Historic England in 2007, all the more exciting.

He said: ‘While writing this book, locked down and unable to visit the seaside, it was a pleasure to wander along England’s coast via the thousands of images in the collection. The photographs in the book hopefully capture the joys of our coastal resorts, including some fascinating features that alas no longer survive, as well as passing moments in the story of our seaside holidays.’ 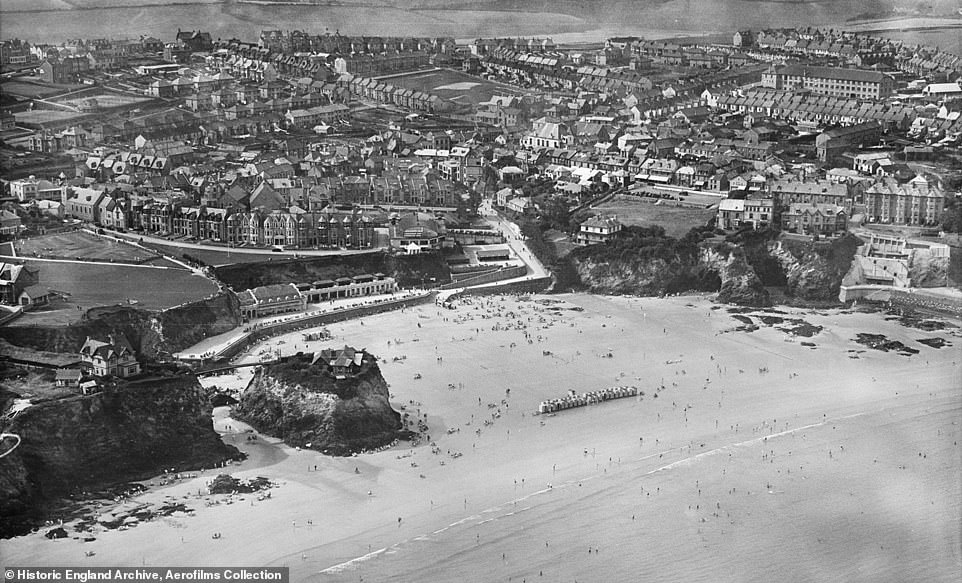 The Island and Towan Sands, Newquay, Cornwall, captured in August 1932. Brodie writes: ‘If you want a seaside property with a great sea view, but you would like some privacy, the island at Newquay is the obvious location. Home to a single house, it is reached from the mainland by a narrow suspension bridge’ 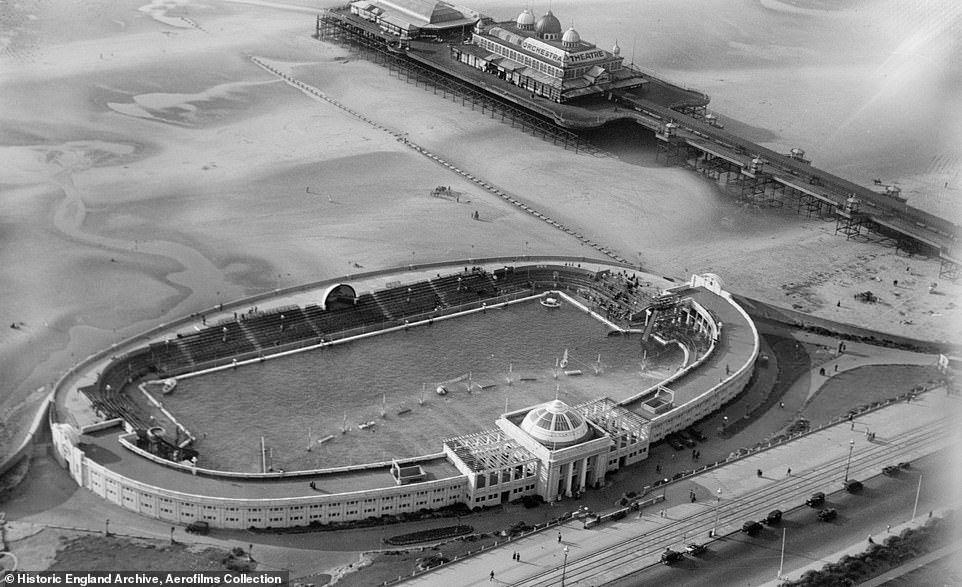 The now-lost open-air swimming baths and Victorian Pier at Blackpool, pictured in September 1929. Swimming began to be a popular activity during the 1870s and by the 1920s, says the book, some huge new open-air swimming pools were being opened at resorts around the English coast. The largest and most expensive was at Blackpool, the tome reveals, and could cater for thousands of bathers and spectators each day

Rustington Convalescent Home, Rustington, West Sussex, pictured in April 1927. The book says: ‘From the outset, the seaside was a destination for people wishing to improve their health. By the 19th century, purpose-built hospitals and convalescent homes were being created, including this elegant example at Rustington’ 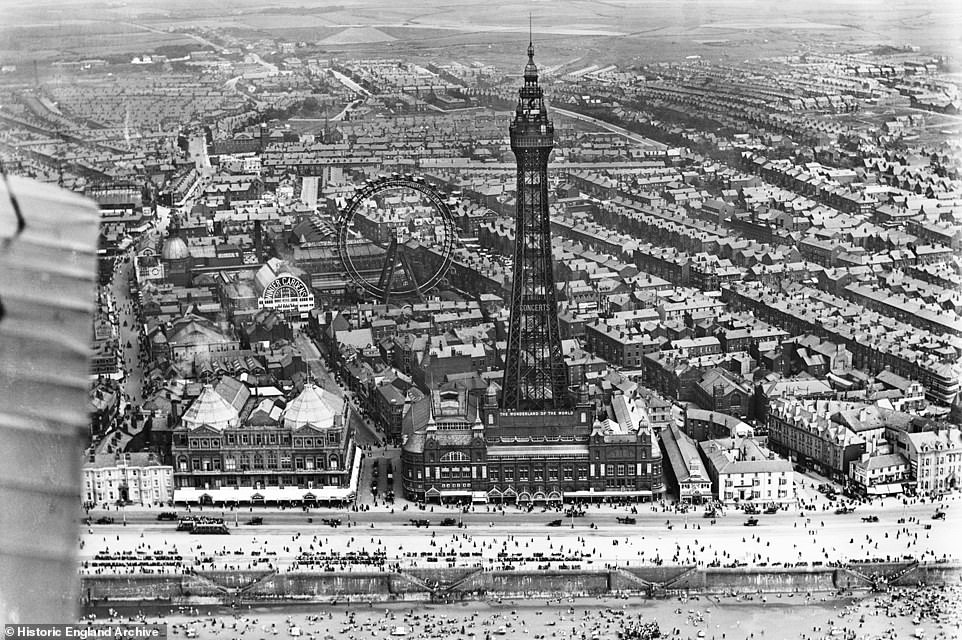 Blackpool Tower and the Winter Gardens in July 1920. The book says of the mesmerising image: ‘In this photograph, Blackpool Tower rightly proclaims itself to be “The Wonderland of the World”. To the left is another entertainment complex, the Alhambra, and behind is the Winter Gardens with its large Ferris wheel. This is also a very informative photograph about the delicate character of the aircraft in which the early photographers flew (see airplane wing on the left-hand side)’ 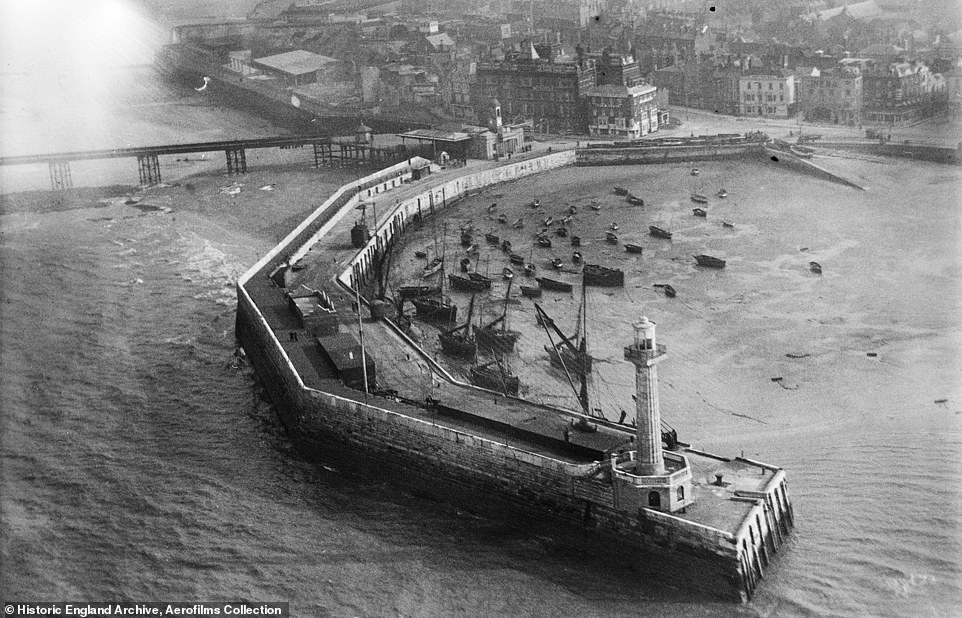 The Harbour Pier in Margate, snapped in 1920. ‘Piers were, and still are, a key part of the seaside holiday,’ writes Brodie, ‘but many began life as a place where ships could land visitors. Margate harbour arm, known locally as the pier, was rebuilt in 1810-5, the iron jetty in the background was added in the 1850s. It was destroyed in 1978 by a major storm’ 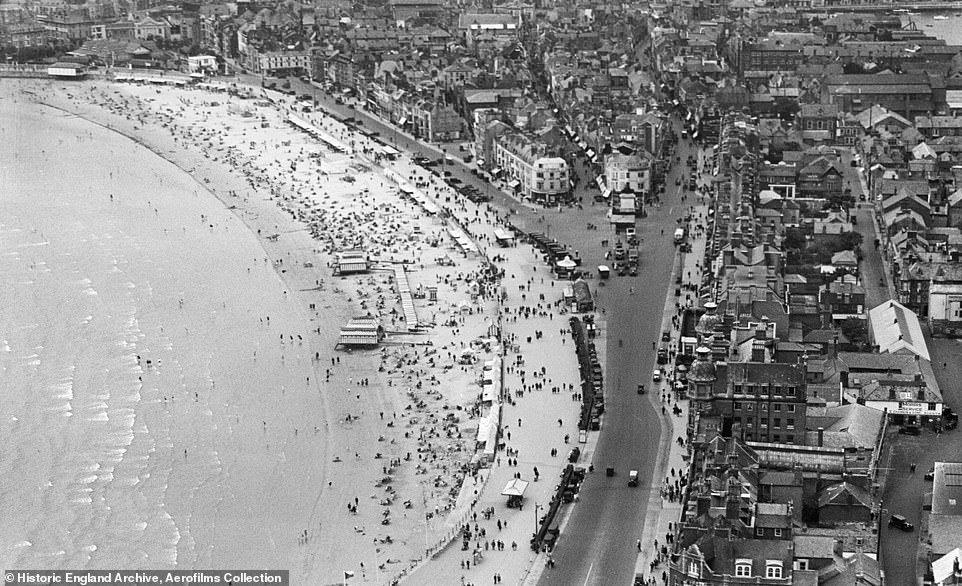 This fascinating 1932 picture shows Weymouth in Dorset in 1932. Brodie writes: ‘By the end of the 19th century, two large saloons had been established on the beach at Weymouth in which men and women could change. The council required these saloons to be kept 75 yards (69m) apart and to do this a line of former bathing machines or beach huts were placed between the two saloons’

This image shows the Pier at Clacton-on-Sea in Essex on August 23, 1938. Brodie writes: ‘By the early 19th century many people were travelling to the seaside by steamer along the Thames to resorts such as Margate, Southend-on-Sea and Clacton-on-Sea. This photograph shows two paddle steamers moored at the end of the pier. The ship moored at the front is the Queen of Kent. It was built as the Ascot-class paddle minesweeper HMS Atherstone in 1916’ 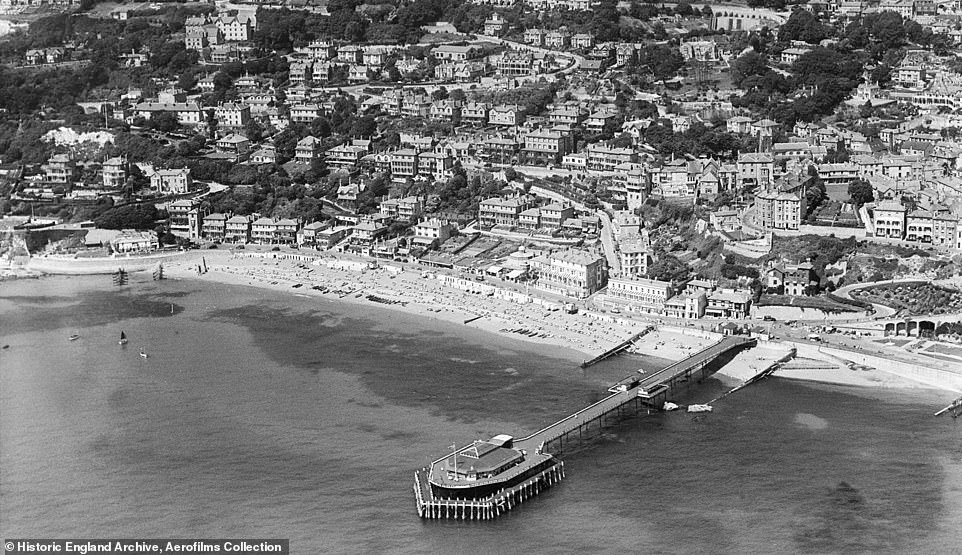 The Royal Victoria Pier at Ventnor on the Isle of Wight, pictured on August 12, 1932. Brodie says: ‘Increasingly by the mid-19th century, wealthy visitors and residents wanted to live in detached villas, which did not necessarily have to be on the seafront. This photograph illustrates very clearly the spread of impressive houses rising up the hillside above the beach at Ventnor’

The Pier at Eastbourne in East Sussex, pictured from a May 25, 1931, flyby. Brodie explains why the image made the cut: ‘This image has been selected because it shows one of the most elegant piers adorned with structures, with exotic roof lines influenced by the oriental detailing of Brighton’s Royal Pavilion’ 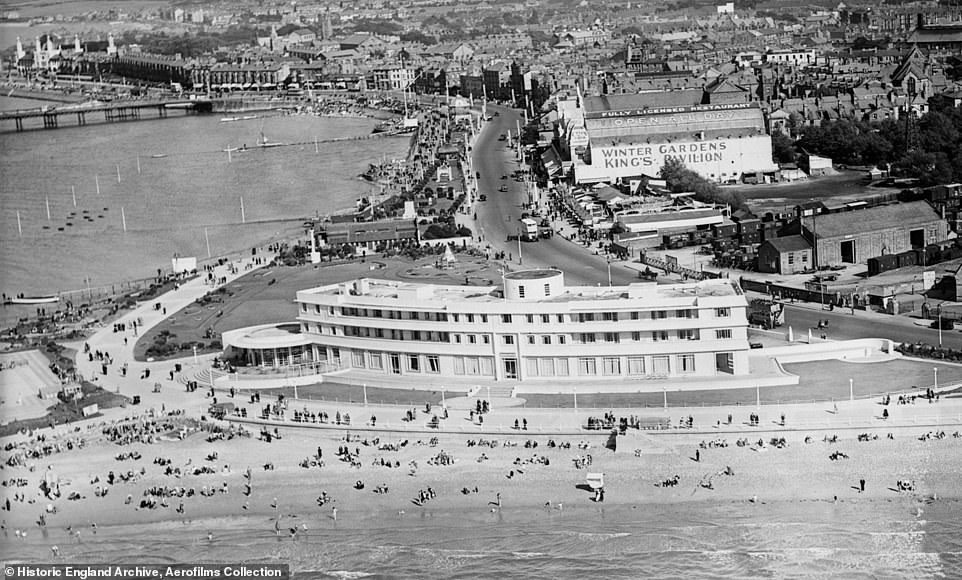 The Midland Hotel and the seafront at Morecambe on August 30, 1934. Brodie says: ‘The Midland Hotel was one of the first modernist structures built at the seaside and is still an important feature of today’s seafront. Behind it can be seen a tidal pool that would soon be replaced by a grand new open-air pool’ 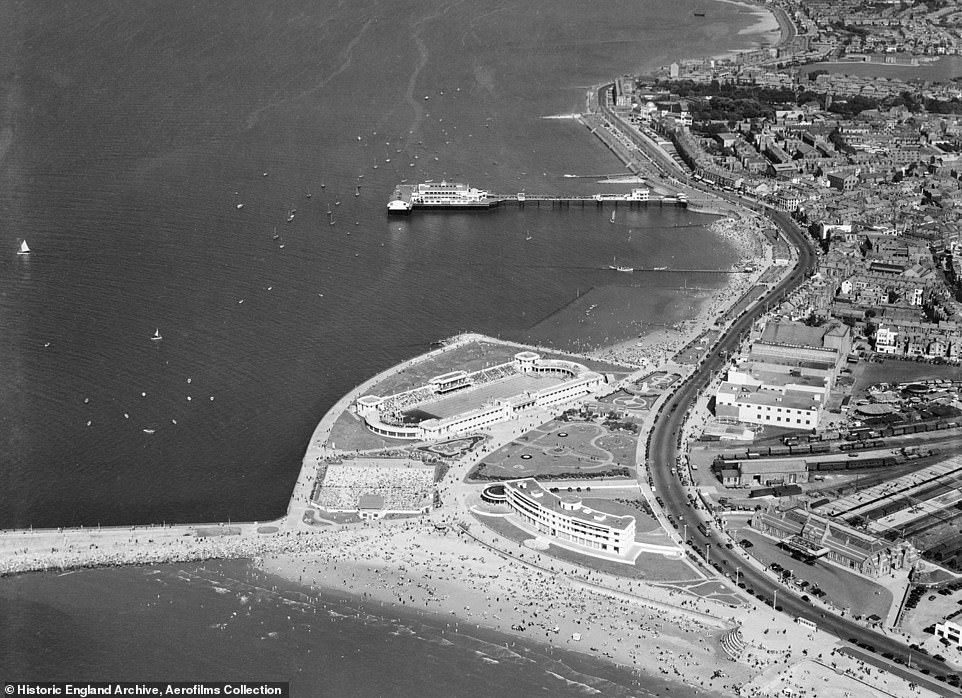 Behind the Midland Hotel can be seen the huge swimming pool erected on the seafront in the late 1930s. This was once the location for the swimsuit round of the Miss Great Britain beauty pageant, Brodie reveals

Walton-on-the-Naze, Essex, and the Tendring Hundred Railway, pictured in June 1920. ‘This photograph was selected because it shows clearly the impact of the coming of the railway to a small resort,’ writes Brodie. ‘It also shows how the railway and the pier worked together to convey visitors to the town’ 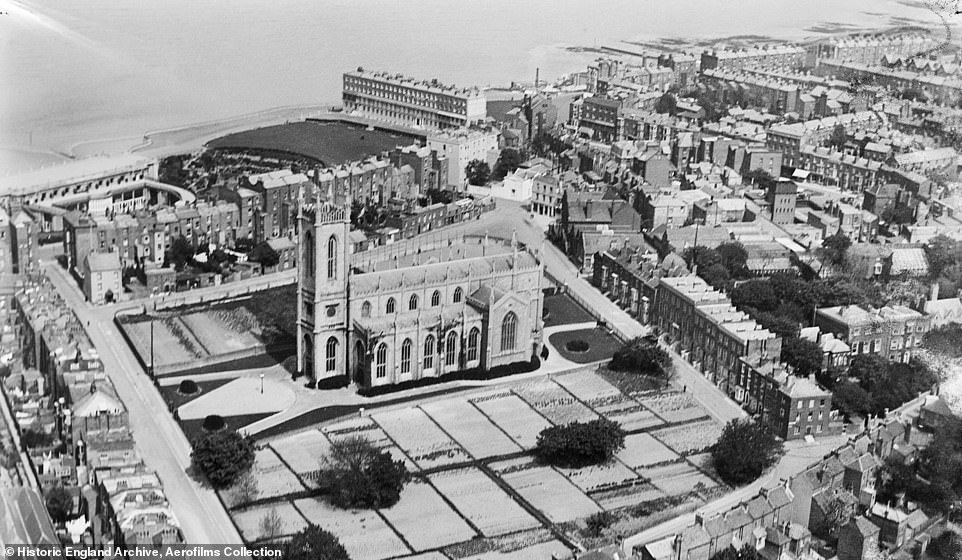 Holy Trinity Church in Margate, photographed in April, 1920. Brodie says: ‘This church at Margate was the size of a small cathedral. Built in 1825-9, it could hold 2,000 people, had a 17.4m-high (57ft) nave and a tower that rose to a height of 41.5m (136ft). It was badly damaged in a German bombing raid on June 1, 1943, but the tower remained standing for many years. It was eventually pulled down when the decision was made not to rebuild the church’ 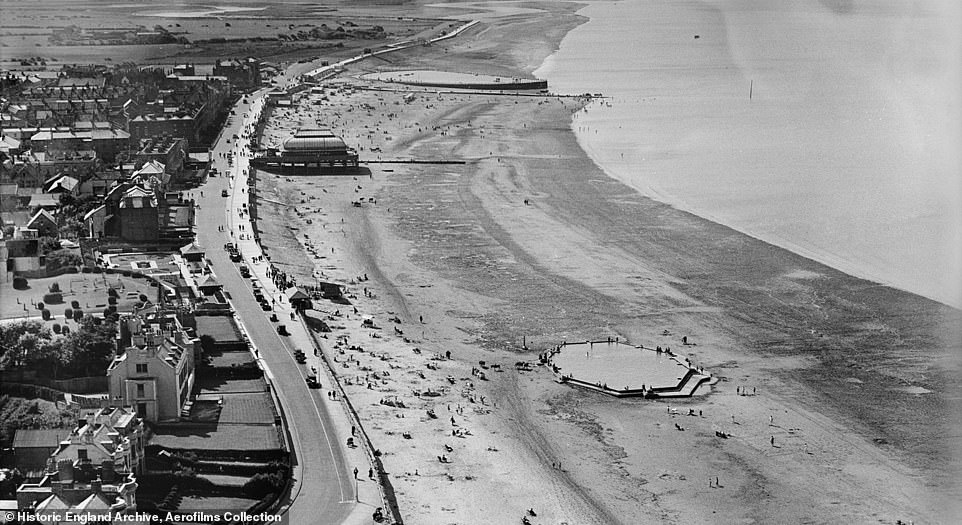 This was the scene at the beach at Burnham-on-Sea in Somerset one August day in 1932. ‘The seafront of seaside resorts is often a place for memorials including war memorials,’ writes Brodie. ‘An unusual example is the octagonal paddling pool built on the beach at Burnham-on-Sea in 1921 by Mr and Mrs Joseph Bevan Braithwaite in thanks for the safe return of their five sons from the First World War. Joseph Bevan was a Quaker, as were his sons, yet they fought during the war. Beyond the pool can be seen the pier at Burnham, which was the last to be built before the First World War. It is claimed to be the shortest pier in England’ 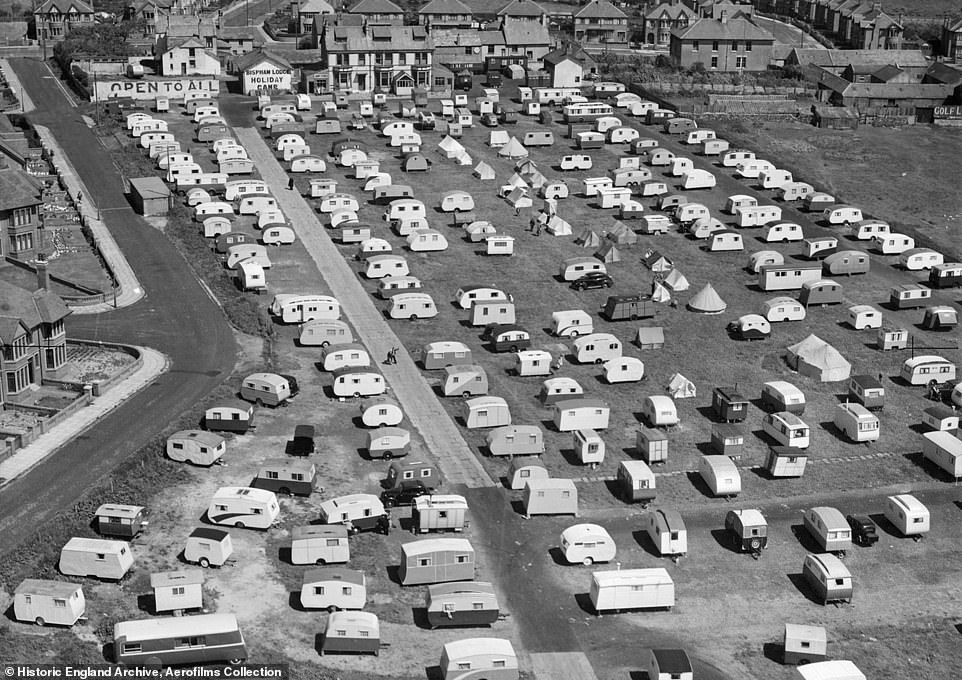 Caravans at the Bispham Lodge Holiday Camp in Norbreck, Blackpool, on June 3, 1946. The book explains that motor homes and caravans surged in popularity between the wars. It continues: ‘This photograph taken immediately after the Second World War shows the substantial nature of motorhomes and the modest size of caravans. The former were often based on a substantial lorry chassis, while caravans had to be small as cars were unable to pull heavy loads’ 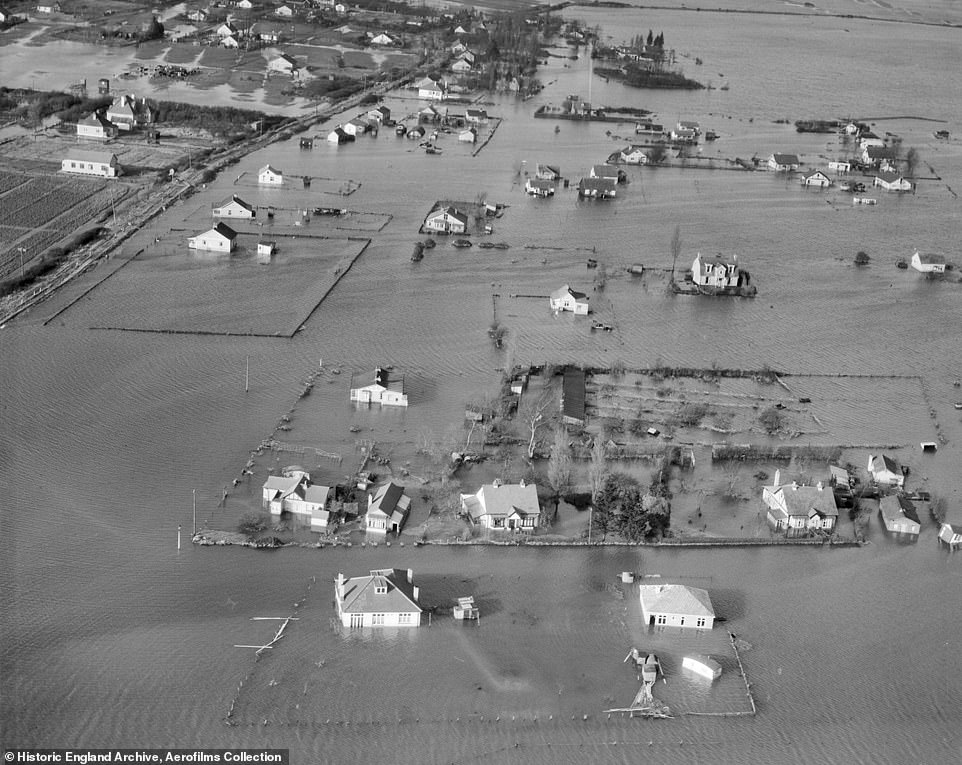 Flooding around Terschelling Avenue and Somnes Avenue on Canvey Island in Essex on February 2, 1953. ‘This image shows clearly the might of the sea,’ explains Brodie. ‘A huge storm surge in the North Sea in 1953 overwhelmed several English seaside resorts and killed 300 people, some of whom died in their beds. One reason was a lack of suitable sea defences and in the years immediately after this disaster, new concrete sea walls were constructed at a number of resorts’ 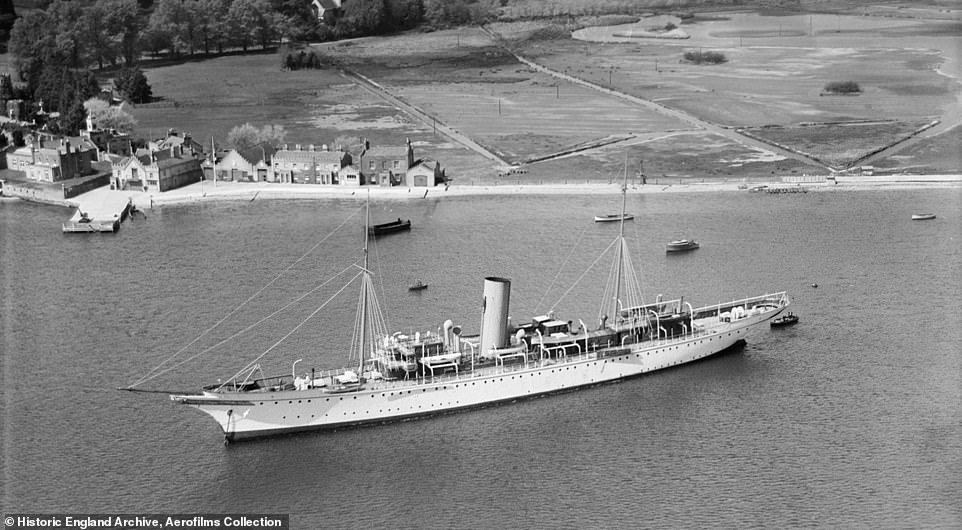 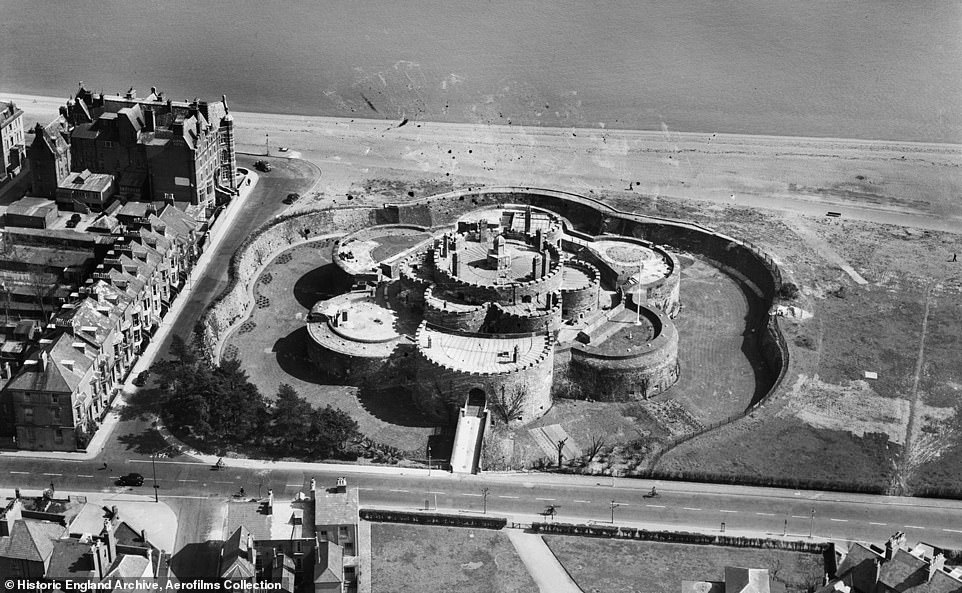 Deal Castle in Deal, Kent, on April 13, 1948. Brodie writes: ‘Seaside resorts are popular because they are easy places to get into the sea, they are also popular with Britain’s enemies because they are an easy place to invade. Therefore, around the coast of England there are a huge variety of military defences dating from the Middle Ages to the 20th century. Deal Castle was built by Henry VIII as part of a major fortification of the English coast in the later years of his reign’ 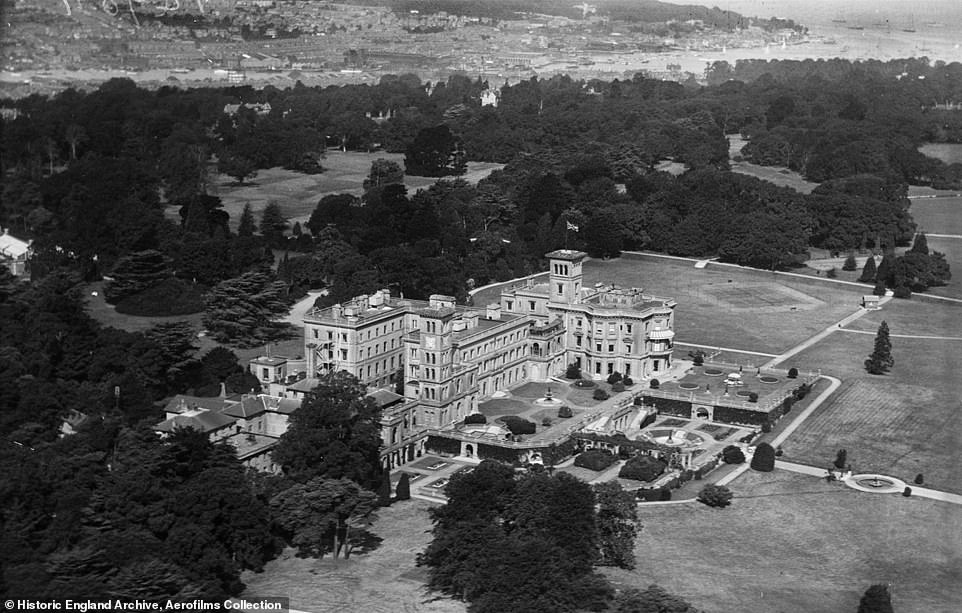 Osborne House in East Cowes, Isle of Wight, in 1923. The book reveals the royal connection with this stately structure. It says: ‘Osborne House was created by Queen Victoria and Prince Albert as their family getaway during the summer. From the house, she had easy access to a private beach and her own bathing machine’ 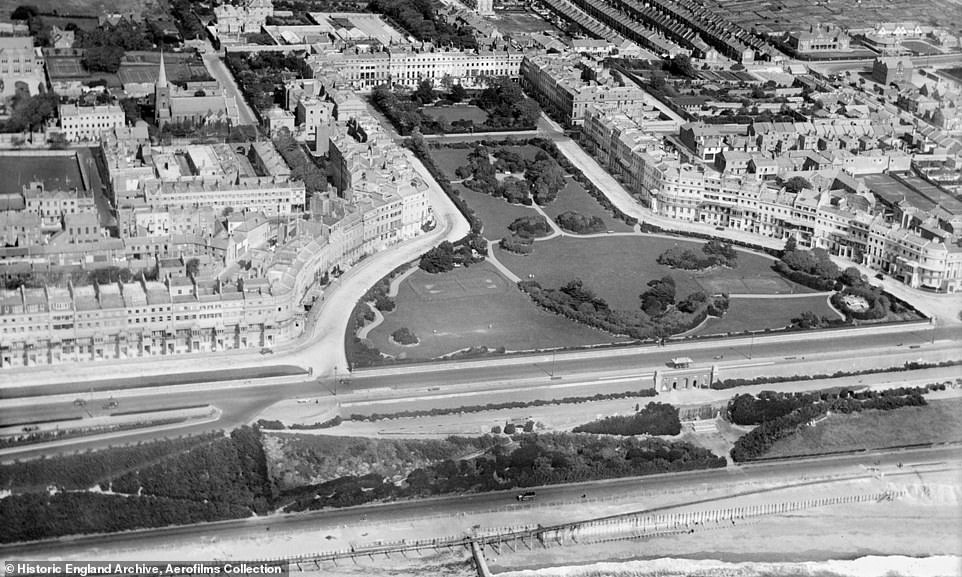 Kemp Town, Brighton, in August 1926. The book says: ‘By the early 19th century, the wealthy people who had originally come to seaside resorts to bathe in the sea were seeking homes and accommodation to rent in new developments away from the increasingly busy centres of seaside resorts. Kemp Town, established to the east of Brighton in 1823, was on a huge scale. Originally designed to provide 250 homes, eventually over 100 were built, compared with 30 in the Royal Crescent in Bath’ 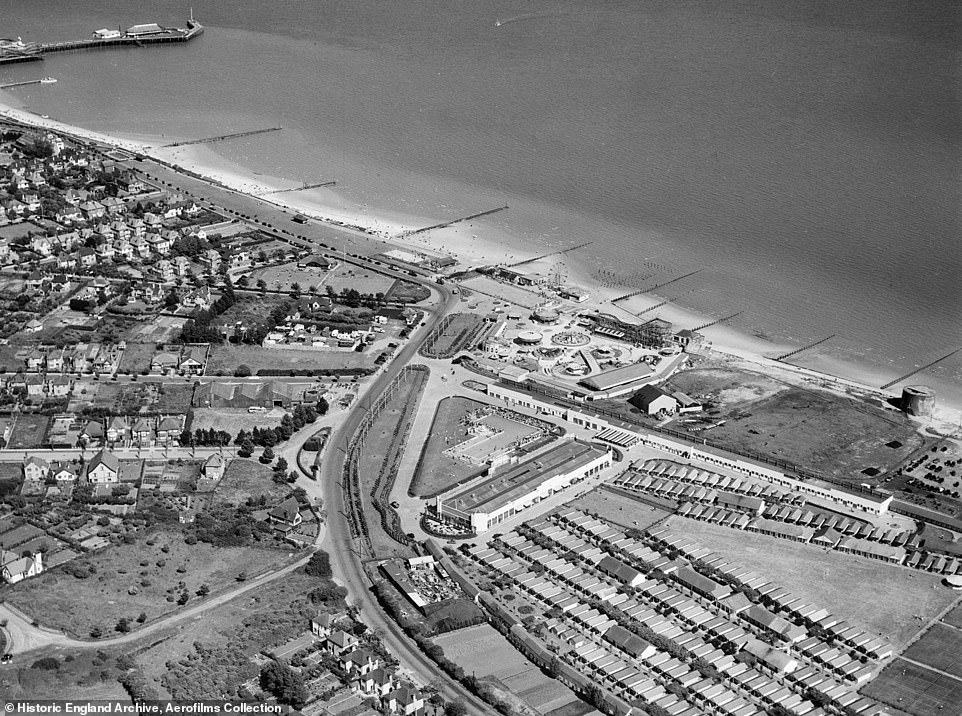 Butlin’s Holiday Camp in Clacton-on-Sea in 1952. Brodie writes: ‘The first holiday camps appeared in England at the beginning of the 20th century and had become widespread by the 1930s. The most famous and largest of these camps were those established by Billy Butlin. The camp at Clacton was his second in 1938, his first having been established near Skegness in 1936’

This 1933 image above Essex shows Peacehaven’s Horsham Avenue and its environs. Brodie writes: ‘The internal combustion engine ushered in the car, bus and charabanc, it also meant that residents in seaside locations did not have to be near a railway station and so large suburbs developed at resorts beginning between the wars. Plotlands were also established on previously undeveloped stretches of coast, far from the nearest railway station. The most famous was Peacehaven, established as a memorial to the end of the First World War’ 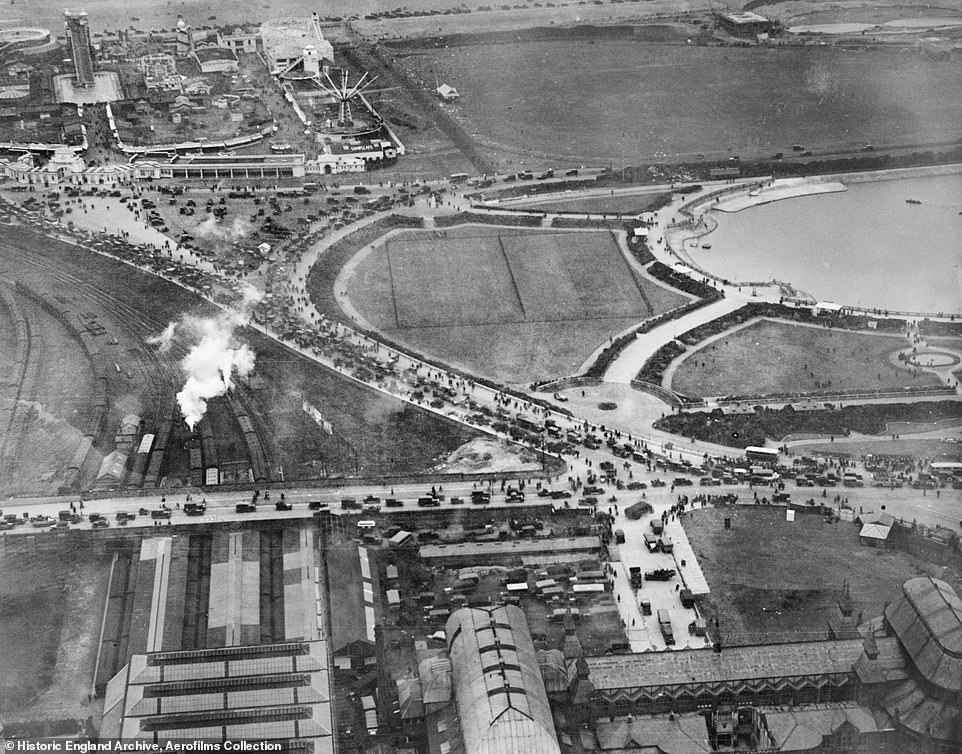 This image above Southport in Lancashire shows crowds gathering for the total solar eclipse on June 29, 1927. Brodie says: ‘As well as capturing images of places, the Aerofilms collection contains many images of events. This is a photograph of crowds gathering to witness a rare total eclipse of the sun, with the Winter Gardens at Southport in the foreground and the amusement park and beach at the top of the picture in the distance’ 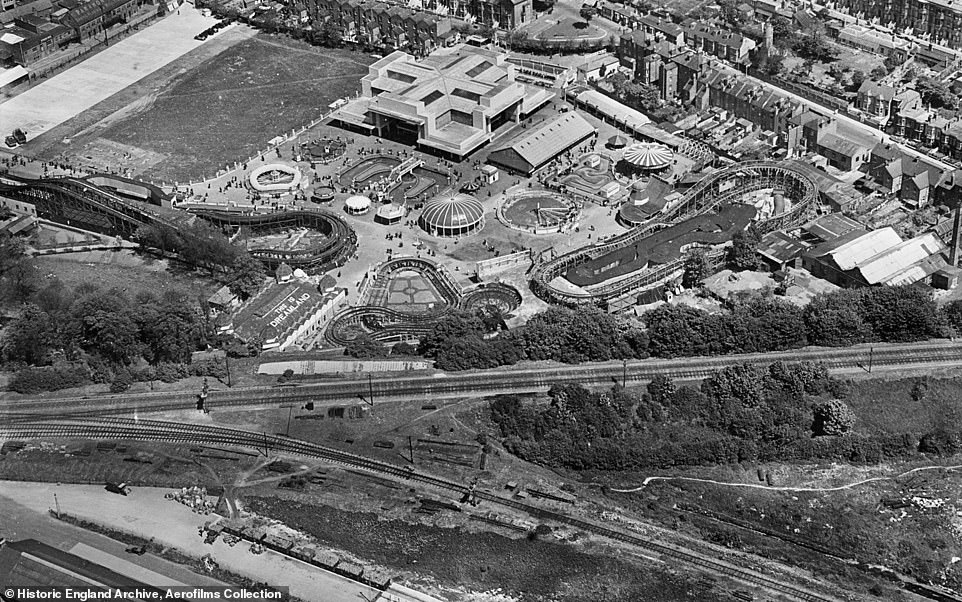 Dreamland Amusement Park, Margate, in May 1931. Brodie reveals: ‘Dreamland at Margate opened in 1920. The ride on the left-hand side of the image is the Scenic Railway, which is listed Grade II as it is one of the earliest roller coasters surviving in the world. It is now a major part of the modern amusement park featuring historic rides from around Britain’ 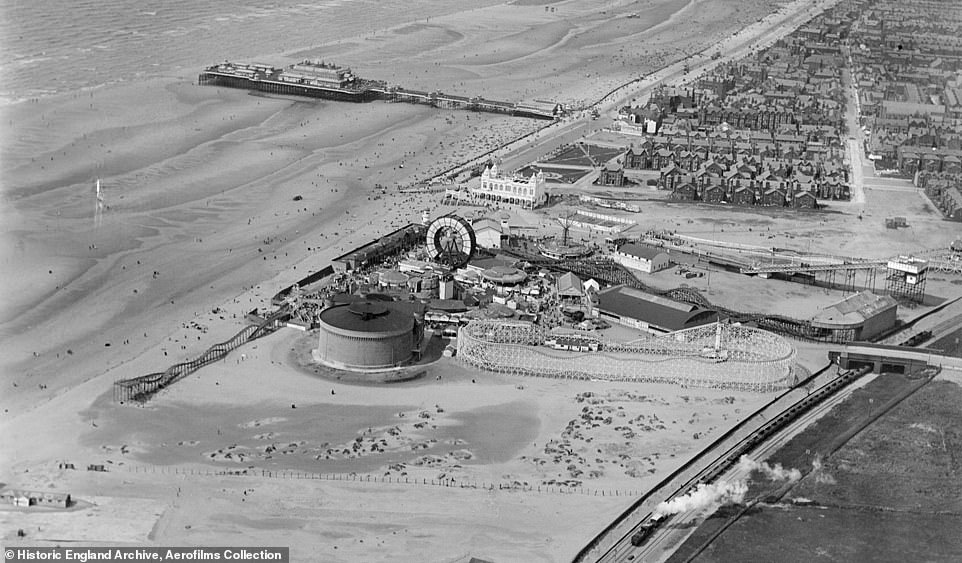 A July 1920 picture of Blackpool Pleasure Beach and Victoria Pier. Brodie says: ‘The technological achievements of the Industrial Revolution began to impact tourism in the mid-19th century, leading to the creation of piers. By the early 20th century substantial fairground rides were also being constructed. Britain’s first enclosed amusement park was created at Blackpool in 1905 and some of the early rides survive today in the still popular Pleasure Beach’ 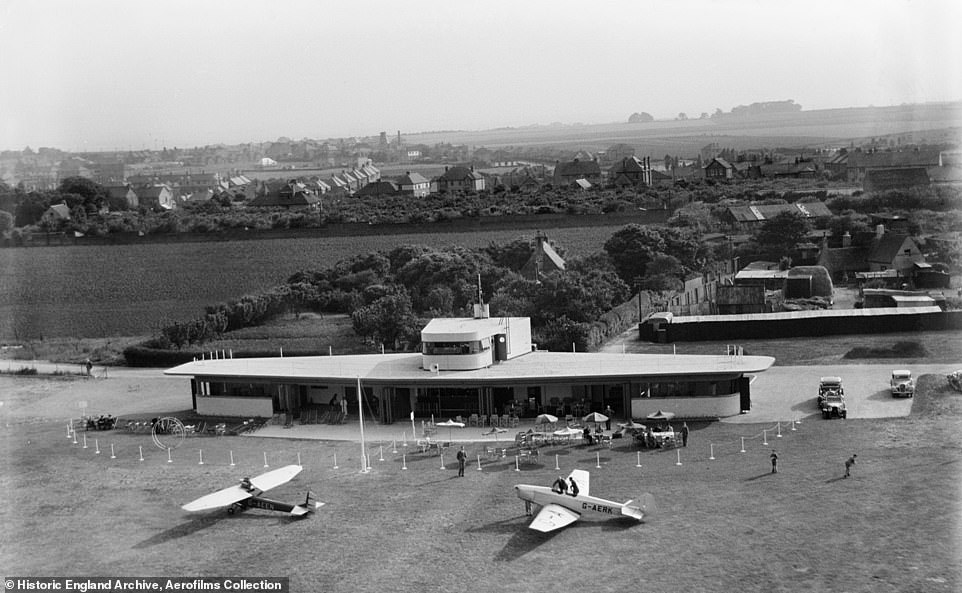 Ramsgate Aerodrome Pavilion in Northwood, Kent, pictured in June 1937. Brodie says: ‘This elegant Aerodrome Pavilion at Ramsgate resembles the wing of a modern fighter aircraft. A number of visitors came to English resorts by plane, but after the Second World War affordable air travel would instead take holidaymakers abroad, leading to a significant drop in visitor numbers to the English seaside’ 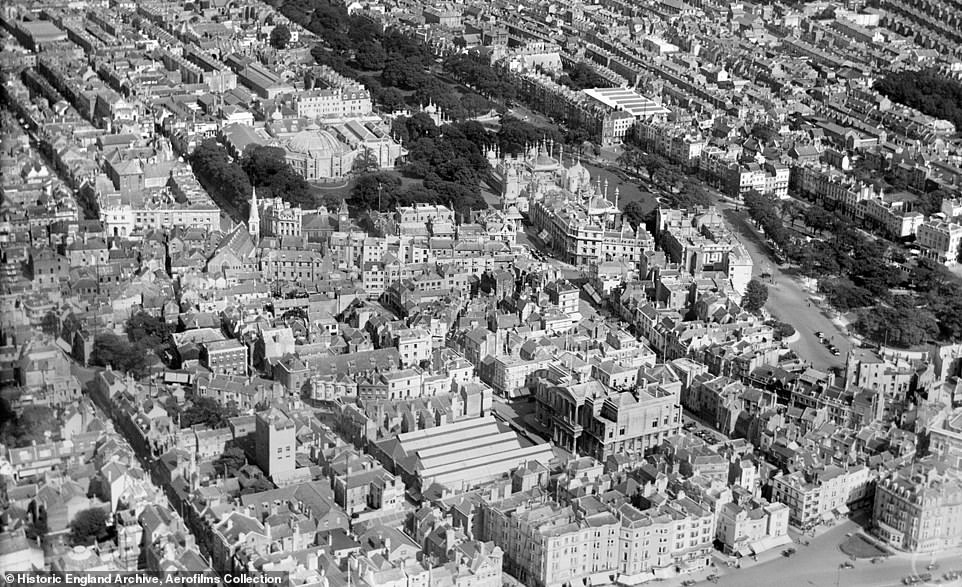 A 1926 picture of The Royal Pavilion in Brighton and the surrounding streets. Brodie writes: ‘This photograph shows the lavish Royal Pavilion created for the Prince Regent, later George IV. What is striking is the proximity of a royal palace to the homes of the ordinary people of Brighton. This would be one factor in Queen Victoria deciding to dispose of the building and establish her own holiday home on the Isle of Wight’ 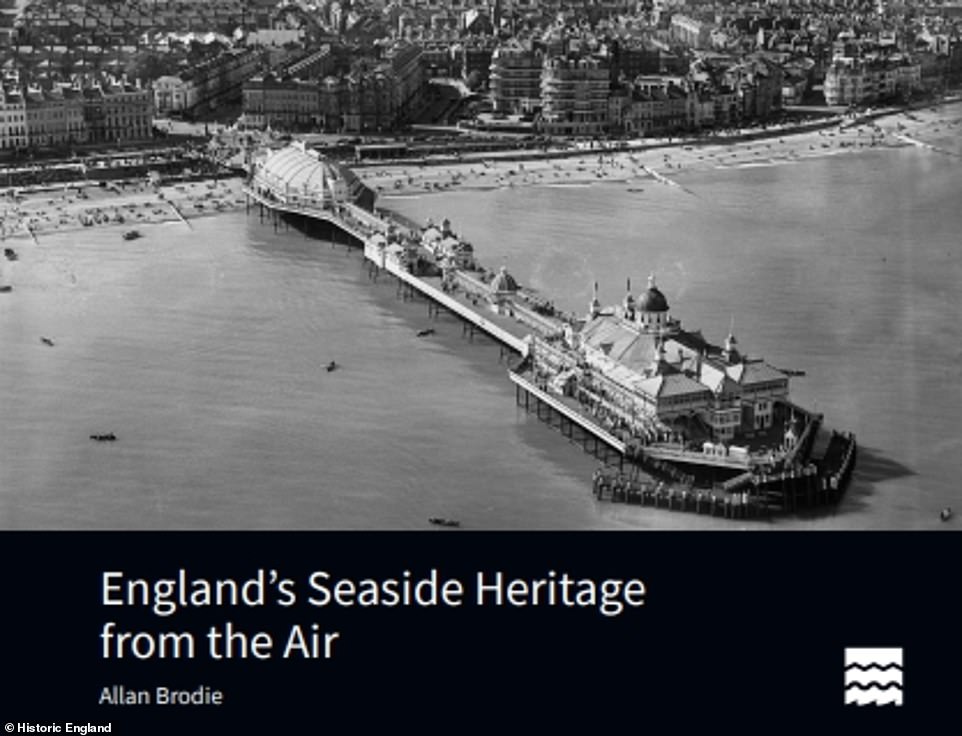