It was 9:30 on a Thursday night, and there was a photo shoot in the Palms porte-cochere. A couple of young women teetered on heels in front of an AstroTurf wall, with the resort’s name spelled out in Jeff Koons-like balloon sculptures behind them.

In the hallway to the hotel’s Fantasy Tower, visitors were broadcasting massive canvases by Damien Hirst and Takashi Murakami to their Instagram feeds, and Scotch 80 Prime, the hotel’s new steakhouse, showed no signs of closing in 30 minutes. At one booth, a bartender mixed cocktails to order while guests filmed the show; at another table, a guy pointed a selfie stick around the dining room in a slow, deliberate pan.

This scene did not mean that millennials are tech-obsessed narcissists who can’t put down their iPhones. It did mean that the Palms is halfway through a $620 million reinvention, and the plan is working.

Las Vegas visitors are changing. They’re gaming less and eating more and spending their money at shops and restaurants and bars. As their behavior changes, Las Vegas resorts are evolving to meet their expectations, capitalize on their preferences and give them something to post about. 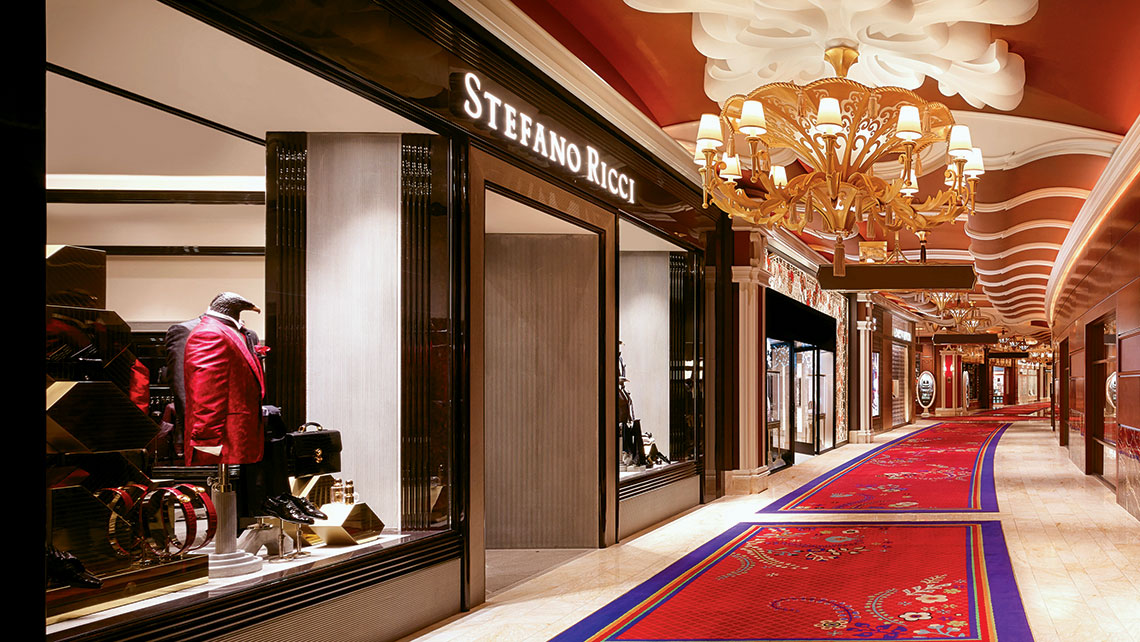 A drop in gambling

Las Vegas is getting younger. In 2017, millennials accounted for 38% of the city’s visitors, according to the Las Vegas Convention and Visitors Authority (LVCVA), the first time they surpassed Gen X as the largest tourist demographic.

They’re doing Las Vegas differently than their predecessors, spending their time and money on different experiences and amenities. One place they’re not spending much of either in is the casino.

“Twenty years ago, more than 90% of visitors said they gambled on their trip. Now it’s 74%,” said Kevin Bagger, executive director of the LVCVA Research Center.

While gaming expenditures are down across the generational board, it’s millennials who are pulling the average spend even lower. According to the LVCVA’s annual visitor survey for 2017, the average budget among all visitors who gambled was $541.18. The $267.67 average among millennials was less than half that.

“Certainly there is an element of life stage,” Bagger said. “By virtue of being younger travelers, they’re not at the same income level” as older visitors.

But that alone doesn’t explain away these statistics. Other generations were more apt to hit the craps tables or sidle up to a “Wheel of Fortune” slot machine, even when they were at the bottom of their generational totem pole.

Instead of stacking chips, millennials are collecting moments: intimate concerts, wild parties, meals that are indulgent without being stuffy.

According to the LVCVA, they’re the demographic most likely to see a show on the Strip, a fact likely driving concert residencies like Jennifer Lopez at Planet Hollywood and Lady Gaga at the Park MGM. Thirty percent of millennials step behind the velvet rope of a casino nightclub; 15% wake up in time to hit the day club, too.

According to Bagger, younger visitors’ spending “mirrors the products that the hotels put in place,” i.e., food and beverage, entertainment venues and the rooms themselves. “Quality across most of the nongaming categories has increased.”

That makes competition fierce. So to differentiate themselves in a landscape of better quality, some casino resorts are undergoing full makeovers, emerging refreshed, re-energized and better suited to entice the next generation of Las Vegas guests. 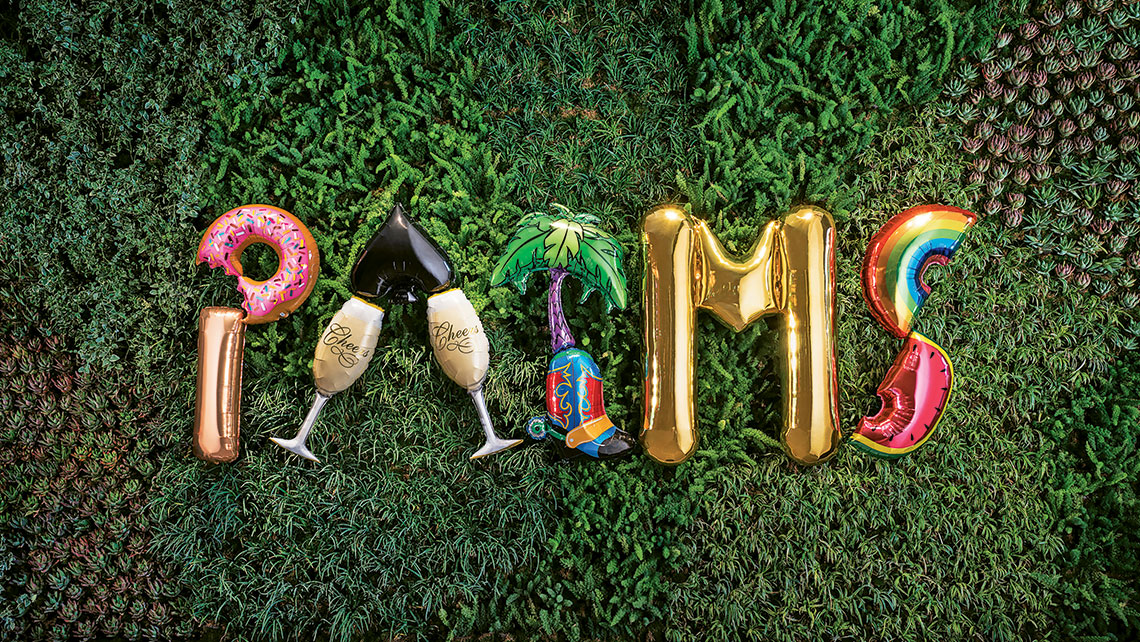 It was 8 a.m. on a Friday, and there was a photo shoot in the hallway to the Fantasy Tower elevators at the Palms. A young woman in pool attire was sitting in a cross-legged yoga pose in front of Murakami’s artwork “Open Your Hands Wide,” while two friends photographed her from different angles.

Halfway through the Palms’ $620 million reinvention under Station Casinos, which purchased the off-Strip resort in 2016, the place already feels new. It’s lighter and brighter, thanks to a raised ceiling over the casino floor, and there’s a so-much-to-see vibe that starts the second you walk in.

“We wanted to create a much more elevated experience than the Palms ever was, but do it in a fun way,” said general manager Jon Gray, a Palms veteran who returned to the property after years away to spearhead the renovations. “People come here for fun. They come here to experience things they can’t in their hometown. We want to offer those things, and we want to offer those things in a premium way but never be pretentious about it.”

A big part of that is the Palms’ new art program. When guests arrive, that Adam Parker Smith balloon marquee is the first thing they see. When they step inside the main entrance, they’re greeted by Damien Hirst’s “The Unknown (Explored, Explained, Exploded),” a trisected, 13-foot tiger shark stored in formaldehyde that serves as the centerpiece of the casino and the Unknown bar.

Everywhere you look now there are artworks displayed in unexpected settings. A Felipe Pantone mural crowns the bar inside the Pearl. A Timothy Curtis painting hangs inside the casino cage. At Apex Social Club, an environment that might seem immune to art with all its flashing lights and darkness, a set of intricate Dustin Yellin collages on layered glass portray industrial scenes and tiny hellscapes. Inside Scotch 80 Prime, I’m offered a table under a kaleidoscopic Hirst constructed of butterfly wings or a booth beneath a brash black-and-white Andy Warhol.

“With the art that’s in there, it’s gallery-worthy, museum-worthy,” Gray said of the steakhouse. “You’re having a banana split underneath a Warhol. That juxtaposition is pretty unique, too.” 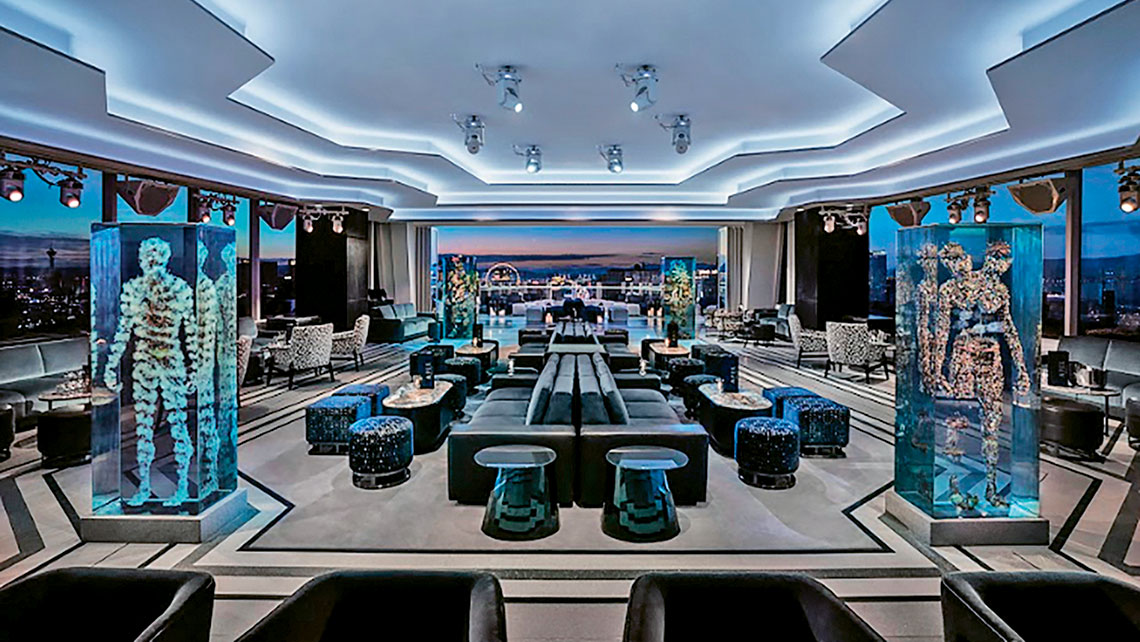 And the renovations aren’t just adding new color to the walls; they’re touching almost every inch of the 17-year-old resort.

A renovated casino floor debuted this spring, with an expansion planned for Q2 2019. New restaurants are on the way from Bobby Flay, Michael Symon and Marc Vetri. The Fantasy Tower room renovations are wrapping up this fall, and Tao Group is working on a nightclub and a 73,000-square-foot pool club that will take daytime parties from seasonal entertainment to year-round staples.

“Over the last 10 years, there’s certainly been a shift of more hospitality spend over gaming spend, which puts a lot more pressure, in a good way, on your hospitality offering,” Gray said. “They’re much more competitive now because that’s what the customer has told Vegas that they wanted.”

Gray said the overall goal for the Palms is to create a sense of energy and discovery, a hum that hits the moment you walk inside. Visitors, he said, now “can discover a new piece of art or listen to some music that you’ve never heard before or try some food that you’ve never had before or meet new people. That’s where I think the future’s going. We offer an amazing canvas for that.” 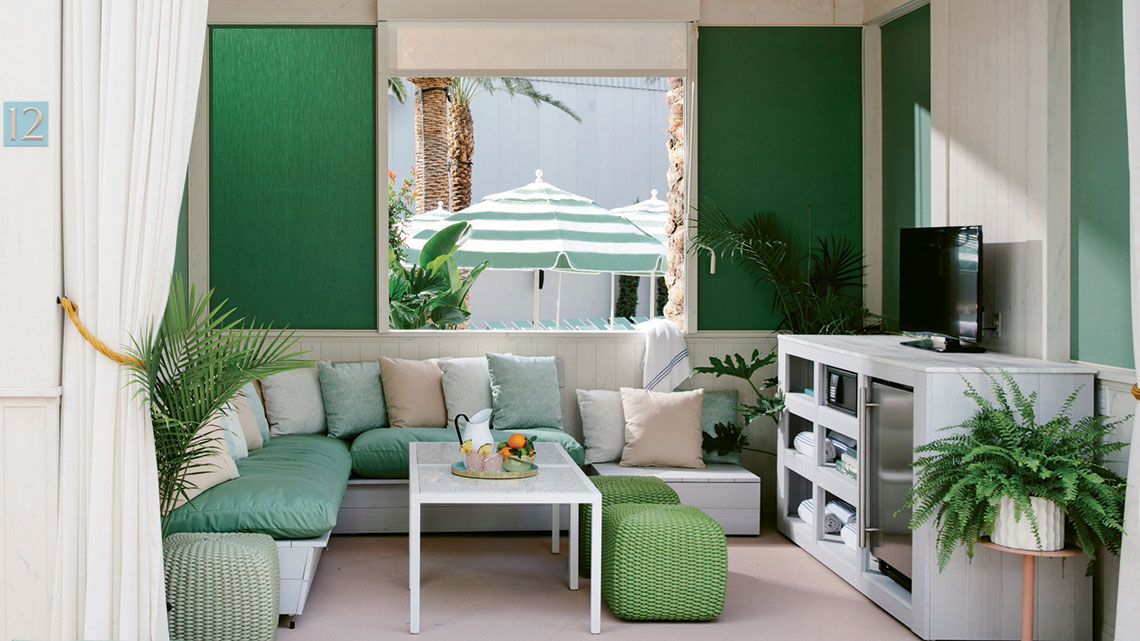 From flash to authenticity

The Palms isn’t the only resort undergoing a full reimagining calibrated to changing demographics. At the center of the Strip, the former Monte Carlo rebranded itself as the Park MGM in May. It is a whimsical, understated property borne of a collaboration between MGM Resorts International and the Sydell Group.

Still a work in progress, the sweeping renovations are touching nearly every element of the hotel. Only the walls and the crystal chandeliers remain.

Park MGM president and COO Patrick Miller said, “Vegas has always had what’s the biggest and brightest. We saw an inflection point where we could be something for the visitor that was authentic, that was real, that was rooted in a more real experience.”

At the Park MGM, real means seeing resident shows from stadium acts like Bruno Mars and, coming in December, Lady Gaga inside the 5,200-seat Park Theater. It means a nightclub from Los Angeles-based Houston Hospitality that’s less about losing one’s self among the masses and more about finding one’s self inside a space that tells a story.

It means a lobby with eye-catching art pieces, including a tree that spreads across the ceiling, and self-check-in kiosks, a la an airport. It means highly anticipated restaurants, like chef Roy Choi’s first Vegas outpost and the city’s first Eataly opening Strip-side this fall.

And it means Sydell’s NoMad Hotel taking over the top floors of the property for a 292-room hotel within a hotel, with its own dedicated entrance, lobby, pool and a NoMad Restaurant from the duo behind Eleven Madison Park, ranked No. 1 on the World’s 50 Best Restaurants list in 2017. 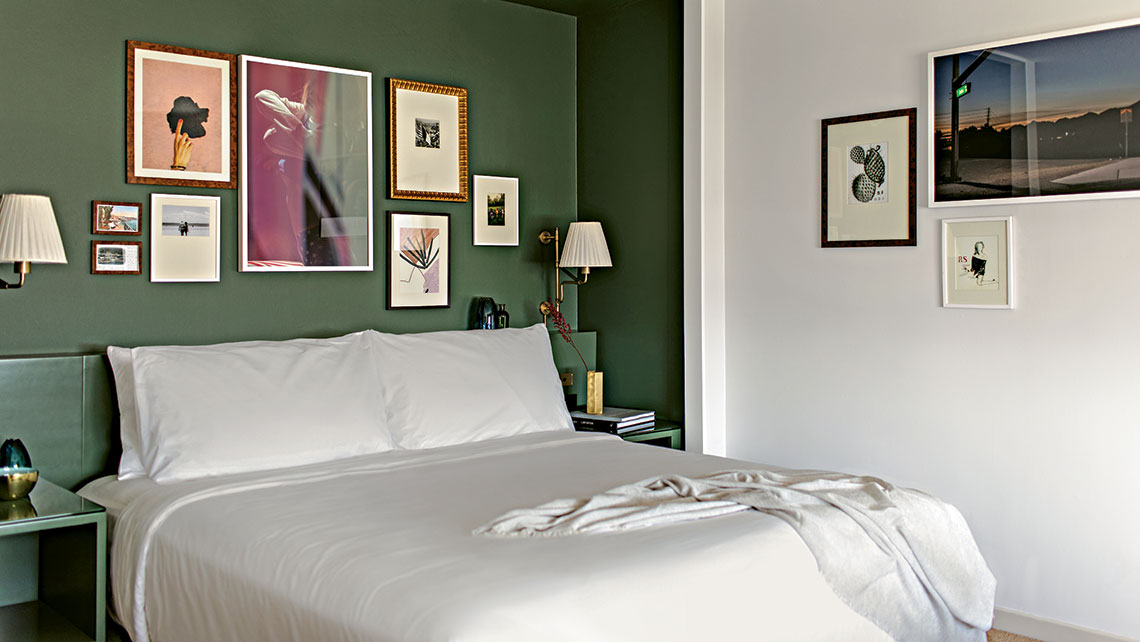 “Having that caliber of chef and operator to come to Las Vegas is differentiating,” Miller said. “It brings a more worldly traveler, someone who knows they want that experience.”

Many of these new spaces are designed with social media in mind, tuned to younger guests in the hopes that they’ll be captured and blasted to the folks back home via Facebook or YouTube or whatever becomes the platform du jour.

At the MGM Grand and the Rio, there are new arenas and lounges that give e-sports the maximalist treatment. When the Wynn Plaza shopping center opens this October, it will include Nevada’s first SoulCycle spin studio.

Next fall, Virgin Hotels will enter the market with a rebranding of the Hard Rock Hotel & Casino, an effort to put its spin on the Vegas resort.

Virgin Hotels vice president of design Teddy Mayer said, “Our brand has a very adventurous spirit, so we love the idea of discovery. It’s not about giving it all away. We want the space to be layered.”

The property will revolve around the brand’s signature Commons Club, a social hub with a variety of corners to explore. Outside, the Hard Rock’s famed pool is slated for a Swiss Family Robinson-inspired makeover.

It will be extremely chic and elevated, Mayer promised, and might even include ziplining. 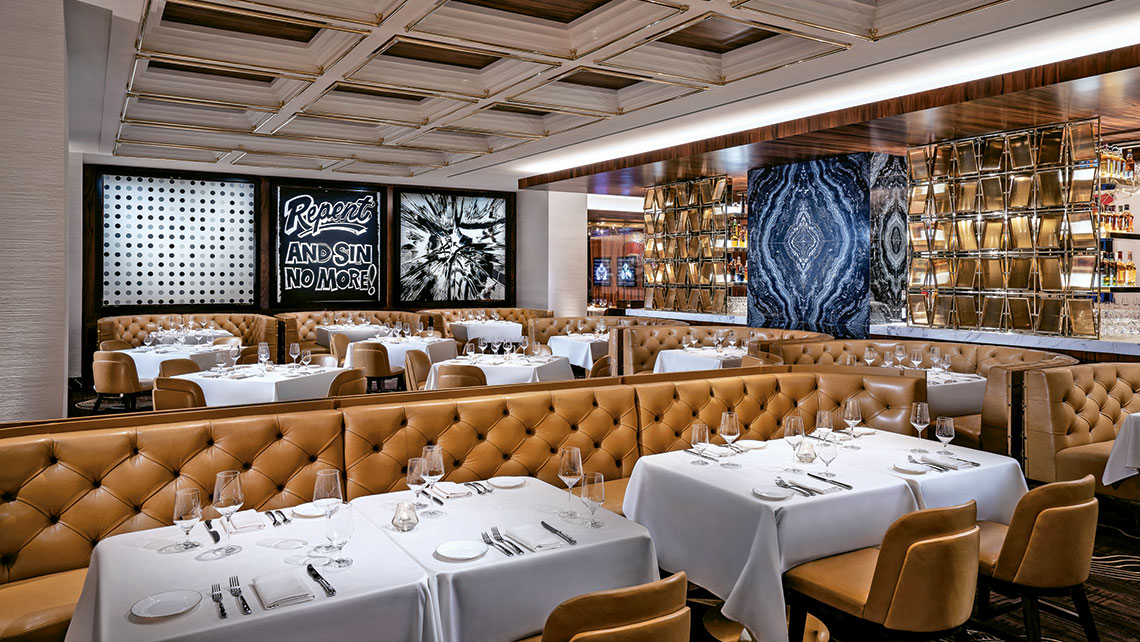 Innovation is paying off

At the Palms, Gray said, the renovations are already showing results. Room rates are up, as is the average check at Scotch 80 Prime, and people are spending more time on site, lingering over dinner, wandering around to check out the art or try to find a certain Easter egg bathroom stall.

Then there’s the digital response, all that time spent crafting the perfect Instagram vignette, the witty selfie backdrop finally paying off. Gray said there’s a buzz again, “where people are actually talking about the Palms, and we’re seeing it trending. We’re creating moments again where we’re part of the pop culture conversation.”

Inside Scotch 80 Prime, at the end of an epic meal of A5 Japanese Kobe and mac and cheese, a cart rolled up with a gleaming KitchenAid mixer. It was banana split time, a simple dessert turned show-stopper with some tableside theatrics. Our server caramelized two slices of banana with a blowtorch, then prepared to churn the ice cream to order. He lifted a pitcher of liquid nitrogen and, just before loosing a cloud of frigid gas over the machine, he turned to make sure our camera phones were raised.

“Tell me when you’re ready,” he said.