PEMBROKE PINES, Fla. — If your idea of transportation is
getting there fast — a nonstop flight, an interstate freeway or the
transporter on the Starship Enterprise — then riding a blimp is probably not
for you.

Blimp travel is the slowest way to move across the horizon,
except perhaps by a hot air balloon, which lacks the small engines mounted
beneath a blimp’s envelope to power it through the air.

I had a chance to spend an hour motoring across the blue
September skies of Florida on a blimp leased by Carnival Cruise Line, which is
using the airship to float a giant #ChooseFun message over seven Southern
states.

If people noticed us above them, it was hard to tell. It is
difficult to make out anyone waving to you at a cruising altitude of 1,000
feet. But the vantage point could not have been more pleasant. It was like the
view you get from a jet just after takeoff but in slow motion, with way more
time to pick out landmarks below.

The Carnival AirShip, as it is styled, was in South Florida
to promote the arrival of the Carnival Horizon in Miami, its home for the
winter season. The Horizon was launched earlier this year and had spent the
summer sailing from New York.

The blimp cruises at a breathtaking 25 mph, so we lacked the
time on our demonstration flight to go all the way down to Miami and back.
Starting from a general aviation field in this suburb of Fort Lauderdale, our
route took us east over Hollywood and out across the beach. From there, we
turned south and took in the glinting, aquamarine Atlantic Ocean for a while
before heading back to base.

The most electrifying part of the ride was the takeoff. It
was a little like ascending in a helicopter and a little like rushing down the
runway in a plane. The pilot gunned the engines to take to the skies, not to
push air under the wings but merely to gain some altitude before we headed out
over a residential area. 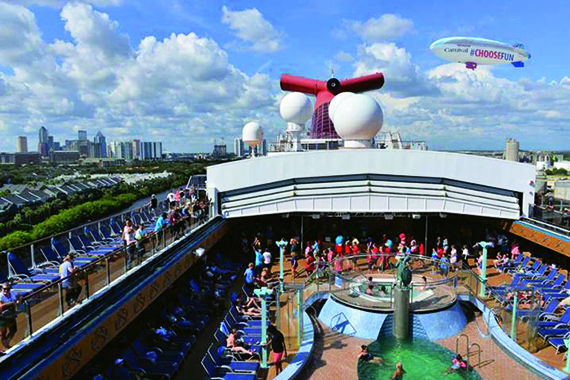 Once airborne, the roar of the engines was throttled back
and the serenity began.

This blimp casts a shadow across the landscape, but not a
big one. It is only 128 feet long, about half the size of the famous Goodyear
blimp. Its passenger gondola seats four, including the pilot. The
instrumentation is about as sophisticated as a Cessna’s, and the twin
80-horsepower Rotax engines were originally developed to power personal
watercraft and snowmobiles.

What this blimp does have going for it is the view. And what
a view! There’s about four feet of transparency between the sidewall of the
gondola and the ceiling of the airship, affording 270-degree views of the sky,
sea and terrain.

One or two of the windows were open, giving us a healthy,
cooling breeze. The engine noise was largely behind us. There was a sense both
of being in a cozy enclosure and being surrounded by a vast, airy panorama.

Part of the fun for me was seeing some familiar landmarks
from a new perspective. Look, there’s the Gulfstream Park racetrack. There’s
the 39-story Westin Diplomat hotel. Hollywood City Hall. That little beach
motel where we spent Labor Day weekend one year.

Although bulky, the blimp proved to be a pretty smooth ride.
After takeoff, we hit some thermal columns of rising air that caused the blimp
to waddle a bit. But it was nothing like the jarring turbulence of a speeding
jet at 35,000 feet.

Once over water, the thermals disappeared. And because there
were no structures below, we could descend to 575 feet, only a little above the
tops of the tallest condos lining the beach.

Blimps don’t even attempt to fly in stormy weather. Pilot
Steve Adams said that, luckily, the Carnival AirShip had only missed three
flying days for weather since it began its tour 20 days earlier in Memphis.

As we turned back to base, there was a small challenge to
the west: a bank of clouds dumping a load of rain, as often happens in Florida
in September. The shower was yet another phenomenon that looked different from
1,000 feet than it does from the ground. It was just south of the airport, and
Adams radioed the control tower to see if it was pushing any wind around
nearby.