When even the heartiest souls in Western New York hear a weather forecast for unseasonably cold, arctic air, they head straight indoors and sit by a fire. When I see the near record low temperatures on New Year’s Day hovering around -13C, however, I stir my parents from the couch and suggest a road trip 50 miles west to Niagara Falls. I want to see what thousands on social media are calling an ethereal winter wonderland.

Growing up in Rochester in New York State, a visit to the famous waterfall in July or August was a reprieve from the hot, humid weather that felt so oppressive after months of rain and snow. My voyages on the Maid of the Mist boat, sailing around the lower basin below the falls, were a touristy but awe-inspiring favourite. Draped in a thin blue poncho and soaked in coconut-scent sunscreen and waterfall spray, the thundering rush of cooling water and endless rainbows never failed to impress.

This week is nothing like that. With temperatures dipping well below freezing and forecast to remain frigid for at least another week, the area is an icy spectacle packed with locals, tourists and those seeking the perfect Instagram shot. It’s so cold that snow crunches under our feet as we take a brisk walk on the promenade along Horseshoe Falls: one of the three enormous waterfalls that make up Niagara Falls.

While 3,160 tons of water (or 600,000 gallons) typically rush over Niagara Falls every second, the slushy current is braking to a lumbering flow today as it struggles to push through partially frozen passages. It even sounds duller and less thunderous than in summer months. The surrounding earth is completely ice-encrusted, shining like jewels when the occasional ray of light peeks through heavy clouds.

The Maid of the Mist shuts down for winter, but it’s still possible to get close to the extravagant winter display. The Cave of the Winds Pavilion at Bridal Veil Falls offers an abbreviated tour in winter months, taking you to a sheltered viewing platform (though if you want to hike the famous wooden walkway around the cave, you need to wait until it reopens in April). 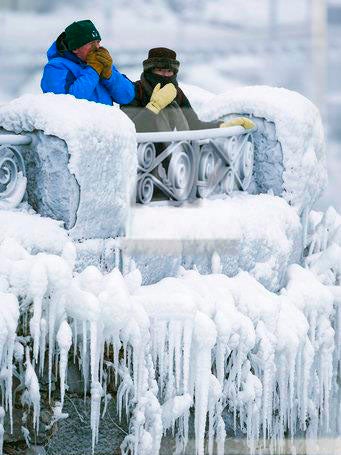 Across the river on the Canadian side of the border, I descend 125 feet through carved tunnels as part of the Journey Behind the Falls attraction for a behind-the-scenes perspective. Typically visitors see the backside of the wall of water; today’s view is a glimpse of a giant ice sheet, with only the sound of the falls to signal my location. In fact, only two of the three tunnels are open due to inclement conditions.

Alternatively, the 520-foot Skylon Tower offers an indoor observation deck for those who want to see the frozen tundra without the wind burn. I opt to keep my visit a purely outdoor adventure and skip the tower in favour of leaning over frosty railings to feel the cold air on my face. My parents don’t share my sub-zero excitement, and opt to watch the scene from the comforts of the gift shop cafe. 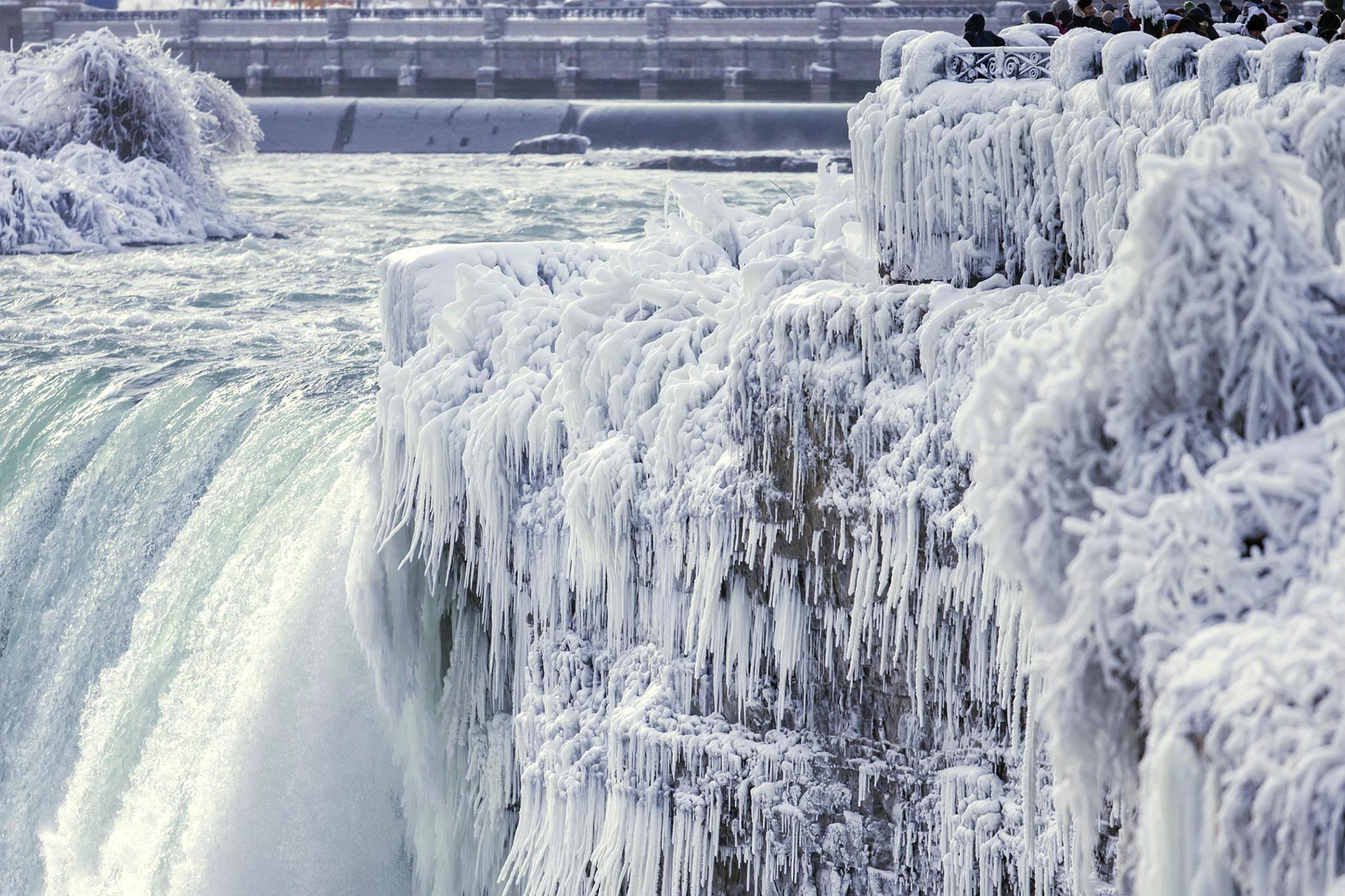 My fingers turn red and stiffen as I snap a few photos, rubbing shoulders with others wincing from the bitter wind chill. As we chat, our breath crystallises, as if forming cartoon conversation bubbles, then drifts away and melds into the mighty plume of frozen droplets floating above the waterfalls. The mist coats everything in a layer of ice, including the wisps of my hair peeking out from my earflap hat. After an hour outside I feel like Luke Skywalker in that scene in The Empire Strikes Back where his icicle-encrusted body takes shelter in the belly of his furry pack animal.

To warm up, I head inside to Tim Hortons, Canada’s favourite coffee-shop chain. It’s crowded, with people lining up and circling around the visitors’ centre. I wrap my hands around a black coffee, getting the needed jolt to dash back out after the sun goes down. The nightly light show – which beams multi-coloured illuminations over the falls – turns nature’s ancient attraction shades of red, blue, purple and yellow.

Niagara Falls and Buffalo (the city to the south) are accustomed to extreme weather. The area is known for brutal winters and vast amounts of snow, thanks to the phenomenon known as ‘lake-effect snow’, a meteorological event that’s the result of cold air from the Midwest flowing over the warmer Great Lakes. The dry air quickly absorbs moisture like a sponge, then immediately releases the freezing precipitation when the clouds drift over land.

However, extended periods of sub-freezing temperatures, especially this early in winter, are not as frequent. The area surrounding the falls ices over every few years depending on temperatures, but rarely does water flow completely stop. Given the forecast for a prolonged deep freeze, there’s a chance nature will recreate the atypical frozen conditions last experienced during the polar vortex of 2014. That’s when Niagara Falls was brought to an icy halt twice in the span of a few weeks. If that happens again, it’s worth a road trip or plane ticket.