Down a narrow cobbled street in Mons, a small medieval town in south Belgium, there is an archive where it is claimed all the world’s knowledge is held – on paper.

At least, that was the original premise of the Mundaneum, also known as the paper Google, the proto-Wikipedia and even the precursor to the internet.

Going back a step to the late 19th century, two Belgian lawyers shared the noble goal of collecting the world’s information and classifying it with their revolutionary system: the Universal Decimal Classification, still used all over the world today.

One was Henri La Fontaine, one of pacifism’s most important figures: an obsessive, bearded vegetarian with two failed marriages and a Nobel Peace Prize. La Fontaine was also a passionate bibliographer and part of a movement for peace through international law with his work for the League of Nations (forerunner to the United Nations).

The other was Paul Otlet, the mysterious pioneer of technology and documentation. He has been recognised as the father of information science, with his 1934 plans for a global computing network – “electric telescopes” – which would allow people to search through millions of documents. He named it “réseau”, which means network or web.

The two men saw the project as the pinnacle of Otlet’s idea of a utopian “world city”. Forging relationships between Europe’s intelligentsia by compiling knowledge, they hoped to create a global unity, transcending borders and fostering peace.

From this intersection of knowledge, documentation and pacifism emerged the original Mundaneum in Brussels in 1910. Since 1998, the project has been based in Mons, Wallonia (the French-speaking Belgian region).

At first glance, it’s underwhelming. The tiny museum is hidden down an unassuming alley, and entering through the foyer of the central hall it’s hard to conceive of the behemoth archive project beneath your feet: more than 12 million 3in x 5in index cards and documents. That’s 6km (3.7 miles) of knowledge.

The Mundaneum is also a landmark in the intellectual and social fabric of Europe. Delphine Jenart, deputy director of the Mundaneum, explains: “European heritage is key in the message we convey about the Mundaneum.”

According to Jenart “the project is the historical symbol of peace through culture in Europe” and a monument to European cooperation during the Belle Époque (the Beautiful Era is a period in Western history generally held to date from the 1870s to the outbreak of World War One).

Sadly, it also stands as a symbol for how and when that peace failed. The proto-computer utopian project was to remain forever unfulfilled, overtaken by the events of history.

During the interwar period, the Mundaneum hosted meetings about non-engagement, conscientious objection and even communism – which wasn’t looked on too kindly by the government, which closed the project down in 1934.

When Germany invaded Belgium in 1940, the Mundaneum was partially destroyed and much of the material lost. As Manfroid says ruefully: “This period was not good for pacifism.”

The museum lay neglected and almost forgotten until 1974, when it was rediscovered by an Australian student and relocated to a 1930s art deco department store in Mons, reopening in 1998.

In 2016 it became the first Belgian site to be granted the European Heritage label by the European Commission for its role in the construction of European identity, and Mons was recognised as European capital of culture in 2015. 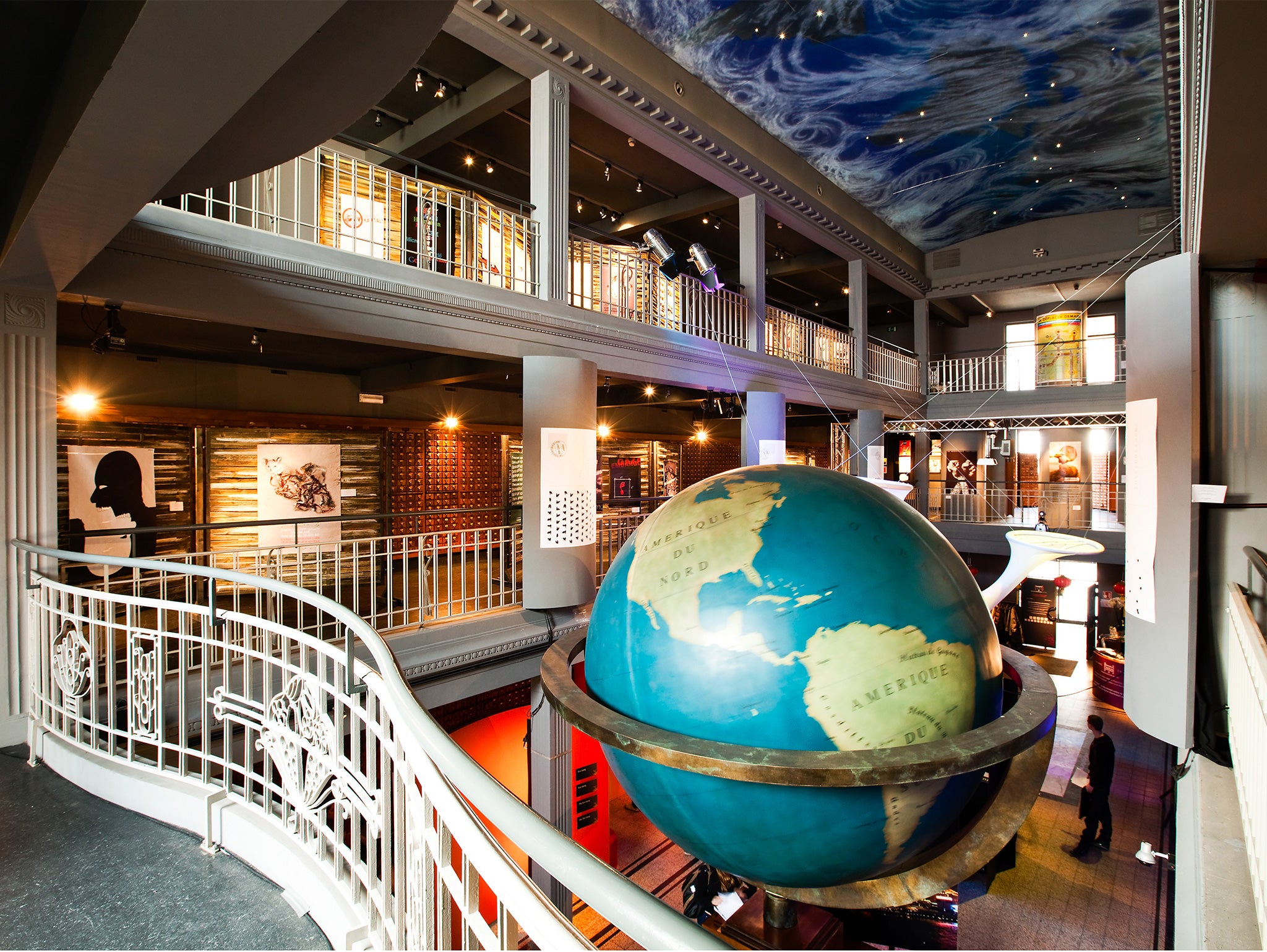 These days the institute functions as a museum, exhibition and lecture space, with a vast underground archives centre. As well as the original index cards and the founders’ collections, the archives hold newspapers, postcards, posters and journals, which seek to capture past eras and cultures.

The archives are also divided into three major thematic sections: feminism, anarchism and pacifism. As Manfroid explains: “Those ideas are very present in the development of the institution in the past and today.

“We share this history to help awareness of being citizens of our own country, but also citizens of a changing world, an extended world.”

But the political nature of the project is still very much at the forefront: the walls of the main central hall are covered in depictions of borders and divisions, with distressing photographs of immigration controls and not-so-subtle references to Trump’s wall.

That’s evident in their most recent exhibition, A world of codes and ciphers, which traces the history of the art of creating and breaking encryption: from Egyptian scribes and ancient Iraqi potters, to Alan Turing and the workers at Bletchley Park – even displaying a 100-year-old enigma machine.

An art installation, by Valerie Cordy and La Fabrique de Théâtre, is a visual representation of the dark web, with different screens following her exploration of the internet’s underbelly.

She plays with the expectations that the dark web is solely a force for evil, showing sites dedicated to promoting human rights, knowledge and creativity alongside more anticipated discomforts like guns, drugs and military footage. White, grey and black hats; cybercriminals, punks, terrorists and hacktivists: all were represented.

In 2012 Google formally paid tribute to the Mundaneum and made a partnership with its archive centre. On 9 June, the International Day of Archives, the catalogue opened to the public.

“In some ways,” says Jenart, “as the project gets more and more international attention, the dreams of global outreach of the founders have been fulfilled.”

Catch the Eurostar to Brussels Midi, then a direct 50-minute train to Mons.

The Dream Hôtel is a four star renovated 19th century chapel in the historic centre. Doubles from £98, room only.

Mons Youth Hostel is ultra-modern accommodation set at the steps of the Gothic belfry; from £9 for a single bed in a shared room.

Open Monday-Friday from 9am to noon and 1pm to 5pm; access to reading room on prior request.