Cancun has always been the most popular tourist destination in the state of Quintana Roo, but for me it’s what lies beyond that’s far more fascinating. In the southern half of the state, along what is known as the Costa Maya, are some of Quintana Roo’s best-kept secrets — secrets that are on the brink of becoming the next big “it” spots in Mexico. Earlier this month, Chetumal, the capital of Quintana Roo, welcomed a new nonstop flight from Miami,  the region’s first nonstop from the U.S. It will operate twice a week, on Wednesdays and Sundays.

It seems that my little secret in Mexico is out.

“Although Chetumal is the capital city of Quintana Roo, the city and its surrounding region of Grand Costa Maya, including Bacalar and Mahahual, is still underexplored by travelers,” said Dario Flota, director of the Quintana Roo Tourism Board. “The appeal of the surrounding destinations like Bacalar and Mahahual, the authentic cuisine of Chetumal and the increasing hotel development in the area along with the multiple archaeological sites that are nearby shaped the airline’s decision of opening its first flight to this quaint city.”

Discovering Chetumal and beyond

Chetumal itself is a small, charming place that exudes a decidedly Caribbean vibe but is a veritable melting pot of cultures and traditions, blending Yucatecan, Mexican, African and Lebanese influences.

It is the gateway to southern Quintana Roo’s biggest tourist destinations — which are still quite small when compared with their northern counterparts of Cancun, Playa del Carmen and Tulum. Among the popular destinations and attractions nearby are the towns of Bacalar and Mahahual, the Sian Ka’an Biosphere Reserve and the Mayan archaeological site of Kohunlich. With the new direct flight from Miami, what was once a four-hour drive from Cancun has been reduced to less than an hour. 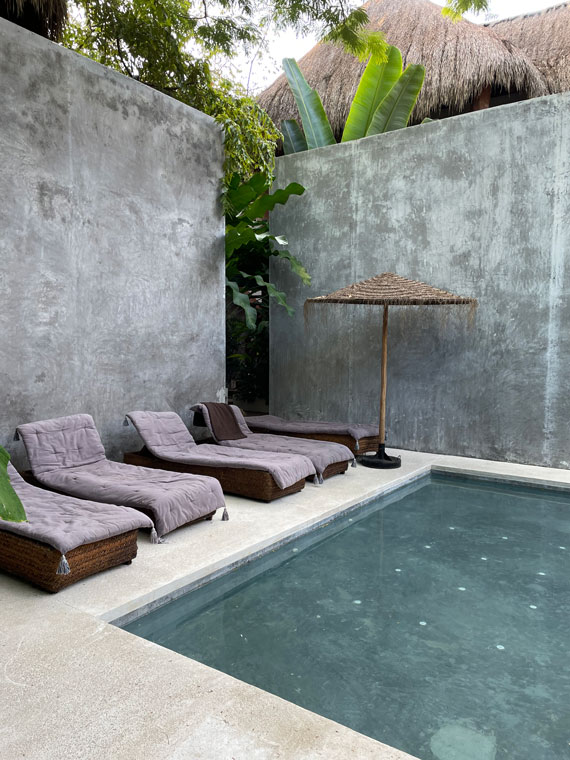 “The region is ideal for those interested in water activities, nature, archaeological sites and history,” said Flota.

Bacalar is a small lake town on the banks of the body of water that shares its name. The Laguna de Bacalar is known for its crystal-clear water, ecofriendly boutique hotels, yoga culture and charming restaurants. New upscale hotels like Casa Hormiga and Habitas Bacalar cater to travelers who may have backpacked in their 20s but who still appreciate a bohemian aesthetic, albeit at a higher price point.

Mahahual is located on the Caribbean coast, a sleepy beach town that has a small cruise port as well as a sun-bleached stretch of sand lined with small, palapa-covered restaurants and bars. It’s also home to some small boutique hotels.

“The lodging options in the area allow travelers to feel in sync with the environment,” Flota said. “Some hotels that recently opened, like Mia Bacalar Luxury Resort & Spa, Hotel Maria Maria, La Galuna Bacalar, Senzus Bacalar, Casa Hormiga or Habitas Bacalar, offer peaceful stays close to the destination’s natural wonders, drawing visitors who want to disconnect for a while.”

• Related: The Mayan Train is back on track

Unlike most who vacation in Cancun, Playa del Carmen and Tulum, visitors who come to southern Quintana Roo are looking to disconnect, unplug and reconnect with nature, serenity and a truly laid-back vibe and aesthetic. Nightlife in Bacalar is virtually nonexistent. Chetumal lacks the thumping clubs like those along Quinta Avenida in Playa del Carmen. And travelers won’t find the gridlock along the coastal route in Mahahual that they see in Tulum.

“The region features vast stretches of virgin white sand, turquoise Caribbean beaches, lagoons, wetlands and mangrove estuaries, too,” said Zach Rabinor, CEO of Journey Mexico. “There are some very important archaeological sites around Kohunlich and many others yet to be excavated. There’s exceptional diving, wildlife observation, snorkeling and more.”

With the arrival of the new direct flight from Miami comes the possibility that additional service could be on the way. And with that, inevitably, could come expansion and development. The hope among residents and business owners is that such development would be limited and would be done while preserving the environment and local culture.

• On the Folo podcast: Getting off the beaten path in Mexico

“We would love to bring more direct flights to Chetumal. We continue to monitor the attendance and growth of this route for future developments,” said Flota. “We hope the route raises awareness of this region, therefore creating more job growth and further tourism offerings in the area.”

Journey Mexico’s Rabinor can be counted among those who are excited about the possibilities for the future.

“The flight represents significant lift into this relatively unexplored stretch of Quintana Roo’s incredible Caribbean coast,” he said. “It will also work for Europeans who crave more off-the-beaten-path destinations. The [Miami] flights will allow more adventurous itineraries without having to make it all the way back to Cancun or Merida. It will also spur multicountry travel between Mexico, Belize and Guatemala.”