The identikit apartment blocks and mousy-brown fields were as unremarkable as the pale scrubland. It should have made for an unremarkable entry into China’s Guangdong province. Except it wasn’t. The thrill of being aboard Hong Kong’s first bullet train, the Vibrant Express, was all about speed, not scenery.

Information boards in the station claimed that the Vibrant Express is the latest of 5,000 high-speed trains that operate daily across China, part of the country’s record-breaking multi-billion-dollar expansion of high-speed rail.

Awestruck, and making unfavourable comparisons with the UK’s doddering rail network, I had lingered in Hong Kong’s newest station before setting off. First, I queued to dine at a branch of Tim Ho Wan, Hong Kong’s most affordable Michelin-star restaurant. I marked the paper order slip as I waited, then my number was called and I was seated. Ten minutes later, a bamboo basket of fragrant steamed shrimp dumplings, a pot of tea and a plate of tonic medlar and petal cake were delivered – all for £7.70. The dumplings were predictably good, but the “cake” was sublime – a flower-flavoured jelly made with medlars and goji berries that delivered myriad of tastes and textures

The two women I shared my table with told me, between bites of chicken feet, that they were heading home to Beijing by high-speed train.

“Chinese aeroplanes are often delayed and the airports are far from home,” they said in unison. 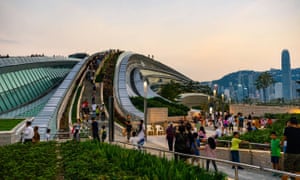 Their journey would take 10 hours and cost £120 second class; my guidebook, published only last year, reported that the journey takes 24 hours. That’s how fast the Chinese rail system is developing. And it’s just as well, given the predicted volume of inbound visitors that will see China become the world’s number one tourist destination by 2030, overtaking France, according to research released this week.

After the dim sum, I took a glass elevator to the pedestrian “skywalk” on the roof. Wooden walkways lined with tall grasses led to views of Hong Kong’s handsome Victoria Harbour.

Behind me was Kowloon, a wall of dense grid-like apartment blocks with thumping basketball courts, chess players and trees filled with twittering sparrows. I’d just spent two nights there, within walking distance of the new station. I resented the curt waiters (Hong Kong service is often brusque at best), marvelled at the zen-like tai chi practitioners, and was surprised, at night, to stumble upon a gang of sex toy hawkers just off Nathan Road who laid their plastic goods out next to a row of fortune tellers.

Several floors below the rooftop garden, railway passengers were setting off on cross-border trains bound for 44 mainland stations, including Shanghai, Kunming and Guilin. For a taste of China’s high-speed revolution, and for an easy bite of an mega-city of which I knew little, Guangzhou seemed ideal. A journey there has now been cut in half, to 48 minutes, making it an easy side trip from Hong Kong (second-class tickets from £23). 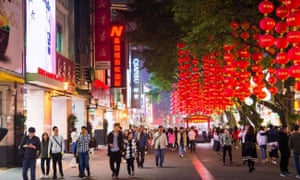 West Kowloon itself is impressive, but not without controversy. Part of the station is under the control of Chinese police and customs officials, allowing for immigration checks before departure. This does not sit well with some locals, who already feel threatened by China’s increasing control over Hong Kong and the “one country, two systems” agreement.

But the immigration process was swift, friendly enough and easy. On board the Vibrant Express, smartly dressed stewards passed through the spotless carriage, offering tea in large glass cups with cork stoppers. The outside world was hushed and shut off, like a silenced TV set.

We eased into Guangzhou South. Passengers, faces melded to mobile phones, disembarked, one collective army of luggage-bearers, and headed up a broad staircase. Below, rows of platforms and identical snow white high-speed trains stretched as far as the eye could see. As the doors closed on the Vibrant Express, a team of men set to work, scrubbing the sides of the train by hand. The crowd tapered towards a colossal, bright-white concourse that resembled an insanely busy airport terminal.

Even without the crowds, Guangzhou South would be disorientating. No ATM worked for me, my phone reported “no signal” and the staff at the information desk politely shook their heads when I asked if they spoke English. Eventually, my phone latched on and I found my (pre-arranged) guide, a well-travelled young Chinese woman who insisted I call her Jane, even though her Cantonese name translated beautifully as purple summer. 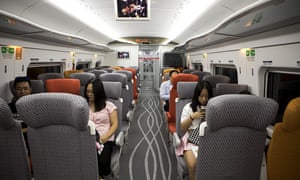 I liked Guangzhou on sight. Its streets, once awash with Pearl River Delta traders, now showcase a mix of the outlandishly new and the very old. The architectural star is the opera house, designed by Zaha Hadid and sitting in the shadow of 400-metre-tall finance buildings. Its boulder-like granite and glass design – twice-yearly cleaning costs £550,000, I was told – was inspired by pebbles in the nearby Pearl River.

Public gardens were filled with picnicking families and the scent of cut grass. Some streets have only low-rise villas, and the half-empty Metro system has a dedicated “ladies’ line” for rush hour. A few steps off Pedestrian Street – one of the main shopping drags, filled with street-food stalls of stinky tofu, durian and “meat cookies” – the alleyways felt timeless. Dog walkers strolled with their poodles past old tea shops, laundry fluttered in the breeze.

Jane took me to Fen Fang Cafe on Tong Fu Road, where I ordered fresh sesame and peanut steamed dumplings, and the lighter jellied water chestnut cake. Little has changed since it opened in 1982. When I handed Jane a napkin, she knocked two fingers on the table. “It’s what we do to say thank you so we don’t have to stop eating,” she said. Guangzhou is a food-focused city.

That night on Shamian Island, bordered by a canal, I was drawn to the only obvious bar, Lucy’s, with its flickering neon sign. Sitting solo in the garden, with a Tsingtao beer, I couldn’t lean on my phone for company, as there’s still no Gmail, Instagram or Twitter in China. I browsed the menu: there were as many rules as drinks. No outside food, no chess, no card games. Strictly no Hong Kong dollars.

Outside, young holidaying couples popped open suitcases and changed outfits, posing for photographs outside the 19th-cenury mansions, hangovers from when Shamian Island was home to French and British trading concessions. When I checked into my hotel, I followed the receptionist’s finger to a small round camera, and was photographed. 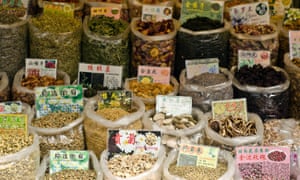 The following day, after visiting the Chen Clan Ancestral Hall, with its penjing (bonsai) trees and folk art, I visited Guangzhou’s notorious Chinese medicine market, Qingping. It was grimly fascinating. Cardboard boxes of fish maw (swim bladders), scorpions and dried seahorses stood next to less controversial bags of glossy dates, mushrooms the size of car wheels and sacks of walnuts.

From there, Jane led me a short way to a nondescript statue of a man. Known as the Father of China’s Railroad, Zhan Tianyou (1861-1919) was the chief engineer, responsible for the Peking-Kalgan railway to Inner Mongolia, built between 1905 and 1909, the first railway constructed in China without foreign assistance.

Today, China’s has around 25,000km of high-speed railway lines, 66% of the world’s total. Despite setbacks with corruption and safety issues, the biggest rail expansion the world has ever seen continues to set records, joining cities and towns, and cutting through mountains, bamboo forests and snowfields. China aims to cover 45,000km by 2030. This modest statue of Zhan Tianyou, on a traffic-snarled corner of Guangzhou, stands as a reminder of how far China has come.

• The trip was provided by Bamboo Travel , which has a tailor-made nine-day tour of Hong Kong and the south of China from £1,895pp, including return flights from London with Cathay Pacific, private transfers, B&B accommodation, and high-speed train travel between Hong Kong, Guangzhou and Yangshuo

Your Astrological Sign Actually Has A Chinese Zodiac Personality Match

Coronavirus in France: Is it safe to travel to France? Deadly virus hits Europe

Venice May Build a Glass Wall Around St. Mark’s Basilica to Fight Floods

You Can Now Get a Fastpass for This Popular 'Star Wars' Ride
We and our partners use cookies on this site to improve our service, perform analytics, personalize advertising, measure advertising performance, and remember website preferences.Ok