The nine-year-old is a screen addict. His perfect day would consist of nothing more than watching YouTube, playing Five Nights at Freddy’s or bingeing on Gumball until his eyes fall out of his head. So, when I tell him of our planned four-night family holiday at Cerdeira Village in Portugal, a wifi- and TV-free zone, the thought of 100 hours without access to video-sharing sites or television renders him speechless.

“But what will we do?” he asks, eventually. “It will be so boring.”

He’s just a product of his time. According to research published this week by Amazon, 83% of British parents will take a tablet on holiday with them – specifically for their kids to use. The study comes on “download day”, when UK customers are expected to obtain more content to view offline than any other day. A nation of panicked parents stocking up on enough digital entertainment to keep the kids quiet on the journey. But they needn’t worry. A holiday without access to screens is not the disaster my son thought it would be. 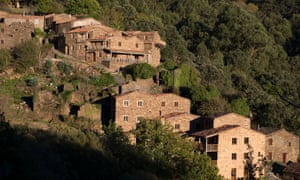 In the Serra da Lousã mountains, two hours’ drive north of Lisbon, Cerdeira Village is on a steep slope surrounded by forest. We arrived on a misty, rainy April afternoon, the pine trees above the car dripping drops onto the back of our necks as we unpacked our bags. The rain had ushered locals indoors and the silence, the mountains rising into the clouds and the stone village with its winding hilly paths, gave the village a Lord of the Rings feel. Then we opened the door to the cafe and a wave of steamy warmth and Portuguese voices welcomed us back to reality.

There are nine tourist houses along with a half dozen private homes in Cerdeira. We stayed in Casa da Árvore, a pretty cottage with a woodburning stove, handcrafted wooden furniture, brightly coloured rugs, a modern kitchen with dishwasher and a balcony that delivered stunning views across the mountains and valley below.

After we’d looked over the cottage, the thought of how to occupy the next rain-filled hours without any kind of online distraction preoccupied us. We lit the fire, looked at it for a moment and, drawn in by its tranquillity and the sound of rain on the roof, decided to read. About 10 minutes later, the nine-year old was spooked by the silence. 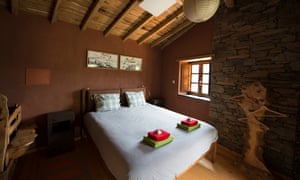 “This is boring,” he announced and my worst fears of four days of this mantra loomed large.

To make noise and discharge energy, we put together a playlist and held a dance off, then played a board game we borrowed from the cafe. Without TV, making dinner became entertainment and afterwards we lay on the sofa in a heap, making up stories and letting the fire lull us to sleep.

The next morning was sunny so we attempted one of the walking paths that start in the village. Tree-covered mountains rose above us, waterfalls tumbled down the hillside between large ferns. We forded a broad stream and the trail twisted and turned, climbed and fell. We spotted a castle with stone turrets on the banks of a river in the valley below, lending the scene a fantasy flourish. 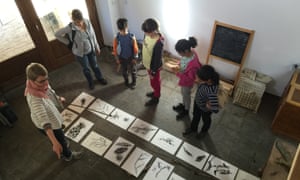 Later that day, the nine-year old made friends with a Portuguese boy of the same age and disappeared. Car-free and with plenty of places to play beside the streams and among the trees, Cerdeira enables rare unfettered freedom for children. We sat on the balcony in the sun and periodically heard them laughing and calling to each other as they ran up the slate paths or sat beside the stream.

The village as it is today is the work of German artistKerstin Thomas. When she and her family arrived in 1988 the houses were abandoned and there was no running water or electricity. Entranced with the area’s natural beauty they stayed and renovated the houses one at a time, inviting friends to do the same. They built a communal art centre and hosted residencies, workshops and festivals. The local council supported the venture with improved access and utilities and in 2012 the tourist initiative began. 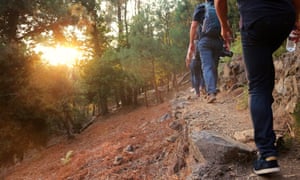 Today, the village art studio offers courses throughout the year, many suitable for children. We took a Raku workshop – a Japanese way of glazing pottery – and learned about oxidisation and the colouring properties of minerals such as copper, dipping cups in milky glazes, watching them cook in a tiny kiln and then smoke dramatically in a bucket of sawdust.

For a change of scene, one day we drove to the nearby university city of Coimbra to explore its charming historical centre and climb the university tower for views across the city. On another, we visited the Biological Park of the Lousã Mountains, where lynx and otters can be seen in their natural habitats. In summer there are river-swimming spots nearby, with blue-flag sandy beaches and children’s pools: one even guarded by its own castle. 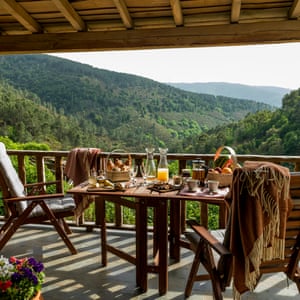 Cerdeira has wifi in the cafe and on the first morning we brought our phones to breakfast, checking for messages and updates. But as they lay redundant for the rest of the day, the urgency, the need to know, dissipated and by the next morning we were leaving them at home. The nine-year-old mourned the loss of the tablet from time to time but mostly he was too busy exploring, playing, helping prepare dinner or contesting the outcome of various board games. Not lost in individual distractions or consumed by TV, all of us talked more together.

The short break didn’t cure us of our addiction. On the way home, my phone beeped as we regained mobile data and I knew I wouldn’t ignore it for long and, at home, the nine-year old embraced his tablet like a long-lost friend. But taking a holiday from the demands of technology gave us a genuine break, with space for some old-school fun together away from the distractions and intrusions of daily life. As we left, the nine-year old turned to watch the forest and mountains recede.

“Do you think we can come back here?” he asked.

• Accommodation was provided by cerdeiravillage.com, cottages from €70 a night

Mill Valley, Cornwall
Stay in a yurt, a cabin on wheels or a hobbit hut complete with living ash tree in the middle. There’s a pizza oven for family-friendly meal preparation and wood-fired bath tubs help make even bath time an event. With plenty of places to explore from Bodmin Moor to beaches and coves, attractions such as the Eden Project and Screech Owl Sanctuary are also nearby.
• From £75 a night, canopyandstars.co.uk

The Star House, near Abergavenny, Monmouthshire 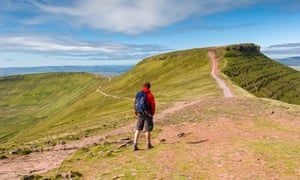 This 4-metre diameter home has a glass-panelled ceiling above the bedroom
designed for stargazing (sleeping two adults and two children maximum). Enjoy the view of the sky at night and choose from a host of activities for families such as pony trekking, ziplining, canoeing and climbing in the nearby Brecon Beacons by day.
• From £88 a night, minimum two-night stay, hostunusual.com

Cawood Castle, North Yorkshire
There’s a wide variety of wifi-less Landmark Trust to choose from including bothies, remote lighthouses, stately homes – and castles. Cardinal Wolsey was arrested for treason at Cawood during Henry VIII’s reign and the rooms are redolent with history. The flat roof offers views across the countryside but the diversions of York and Leeds are less than 15 miles away.
• Four nights from £247, landmarktrust.org.uk 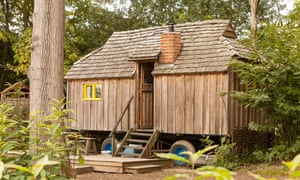 Choose from a series of wooden cabins, each sleeping up to four. Wind-up radios, books and games are on offer and if you don’t feel like cooking there’s a chef on site for meals and afternoon teas. Children can help feed the farm animals and there is kite-surfing, horse-riding, steam train rides and cycling rental nearby.
• From £97 a night, hostunusual.com

Catchpenny Safari Lodge, Fife
At this safari-style escape, large, family-size tents face the ocean and come with woodburning stove, sofas, king-size beds, well-equipped kitchens and piping hot showers along with sea views. Dolphins and seals are regularly seen and humpback whales have been spotted. Tranquil, remote and with access to the coastal walking path but just a couple of miles away from the shops and restaurants of Elie and St Monans.
• Tents for six from £138 a night, canopyandstars.co.uk