The rain has stopped. Wet beeches and coppery bracken shine in the autumn sunlight. I’m walking through Delamere Forest, Cheshire’s biggest woodland area, past prehistoric bogs with carpets of starry sphagnum, and flooded Blakemere Moss – the wetland cacophonous with rain-loving ducks and greylag geese. Pine cones, acorns and bristly sweet chestnuts pepper the forest paths. There’s a visitor centre nearby and the refurbished Delamere Station House is an atmospheric cafe, where the day’s specials include mushroom stroganoff (£6.50) and butternut couscous (£6).

I arrived the previous morning in Chester, a two-hour train ride from London Euston, and spent a day exploring the city. The rebuilt walls, where Roman legionaries once guarded the fortress of Deva, now provide an hour-long, traffic-free stroll, overlooking the racecourse, the Roman amphitheatre (Britain’s largest) and the Rows: medieval shops with half-timbered upper galleries. 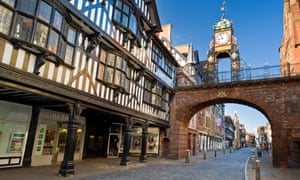 The Grosvenor Museum (free), with its ornate Roman gravestones and 18th-century oil paintings of Chester, is a great place to shelter from the changeable Cheshire weather. So is the cathedral and, behind it, Chester’s indoor market. I browse through paperbacks in Bookingham Palace and have coffee at Crustum. Then I buy a floury brown cob and crumbly white Cheshire cheese to eat among columns, mosaics and poplars in the Roman gardens, before taking a short cruise up the River Dee. Covered boats leave every half an hour, from the far end of the garden. Even in winter they sail hourly past spread-winged cormorants, Victorian villas and willow-fringed meadows.

It’s a 10-minute train ride to Lloyds Meadow, where I’m glamping. Six bell tents, spaced around lakes with wooded islands, opened just a few weeks ago and are now booking for next year. A morning walk through the dew startles rabbits, moorhens and long-necked herons from the grassy banks and bulrushes. After dark, soft solar globes glow in the trees and fish jump in the water outside the tent entrance. The site is on the edge of Ashton Hayes (which has been aiming for some time to be the UK’s first carbon neutral village) and near Mouldsworth railway station with its neighbouring pub, The Goshawk. 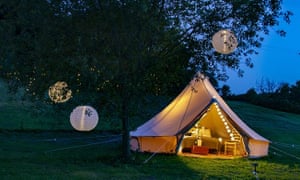 Delamere station is one more stop by train but I walk the couple of miles to the forest, along field paths fringed by late poppies and delicate wild pansies. I’m sustained by a breakfast of local produce, including prize-winning sausages and Cheshire oak-smoked bacon from a nearby butchers and sweet-sharp juice from Ollie’s Orchard near Delamere (Lloyds Meadows can provide hampers, including cooking gear, £25).

Next day, I catch the train from Delamere to Northwich, 15 minutes further east, to explore the area’s industrial heritage. The Anderton Boat Lift, opened in 1875, towers on cast-iron pillars over the Weaver Navigation, lifting boats 50 feet to the Trent and Mersey Canal. The visitor centre is free, but I’ve opted for another boat trip, along the green-banked river to the edge of the half-timbered town, and a ride up in the lift itself, where water cascades above the boat’s glass ceiling (combined trip adult £12.25, child £7.25). The No 4 bus stops nearby but the weather is fine again so I walk from Northwich along the Weaver. It’s two more miles beside the canal to the Lion Salt Works, and roughly the same again from there to Lostock Gralam railway station. 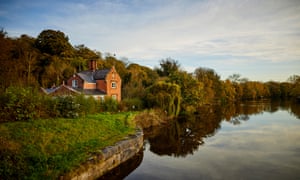 Apart from short urban stretches at the start and end, this six-mile waterside loop, punctuated by year-round heritage attractions with cafes, proves an ideal autumn stroll. There’s a cidery smell of windfall apples and woodsmoke from narrowboats, chugging past through seasonal mist. There’s plenty of mellow fruitfulness, too: hedges heavy with dark, jewel-like elderberries, crimson hawthorn and blood red rosehips. The canalside Lion Salt Works (adult £6.25, child £4) reopened for visitors four years ago after a £10m restoration. It manages to combine hi-tech exposition with an evocative sense of past effort. Among rusting brine tanks and brick chimneys, dioramas and projections conjure up sweaty 12-hour shifts working boiling salt pans.

My last day, with an early evening train booked, and it’s raining again so I decide to check out Chester Zoo (15 minute bus ride from Chester station, with discounted rail-bus-entry tickets from £24). Without kids to entertain, I plan to whizz round the 125 acres and spend the afternoon in town but half an hour’s gone before I’ve even left the first aviary. I’m watching the orange and turquoise starlings, which I last saw outside a tent in the Maasai Mara 30 years ago. 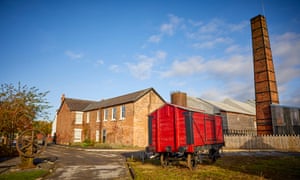 Over the next few hours, I’m transported round the world. I take a leisurely boat trip through the Islands, a series of south-east Asian habitats that opened in 2015, and walk through the warm, leafy tropical house, full of free-flying Madgascan red fodies and emerald doves. New grasslands, opening this autumn, will house Asiatic lions. Besides the low-carbon travel, this is colour therapy for a wintry day: clownfish swim through coral, huge blue morpho butterflies hover among scarlet hibiscus and candy-pink flamingos balance in a grey-green lake. Autumn is still evident in the caramel scent of a katsura tree or a pond of otters playing with yellow birch leaves; it’s a bright finale to four days of woods and water.

• Rail travel was provided by Virgin Trains (London Euston to Chester from £19 one-way). Accommodation was provided by Lloyds Meadow glamping (bell tents for two, from £70 a night). Chester Zoo and other attractions provided free entry

10 of the most beautiful valleys in the US

Disney World union head warns Disney has to get Florida reopening right
We and our partners use cookies on this site to improve our service, perform analytics, personalize advertising, measure advertising performance, and remember website preferences.Ok