Coo-ey, breakfast, shouts Dzeneta from the verandah of her farmhouse. I open the creaky gate of the picket fence and make my way back from the beach, stuffing a shell into my trouser pocket.

Here on the Baltic shore of Cape Kolka sandcastles have replaced Soviet machine gun towers and the shriek of children playing in the dunes drowns ghostly echoes of the past.

The white sand stretches north to the Estonian border and south to the frontier with Lithuania, a 300-mile swathe of perfect white seaboard. 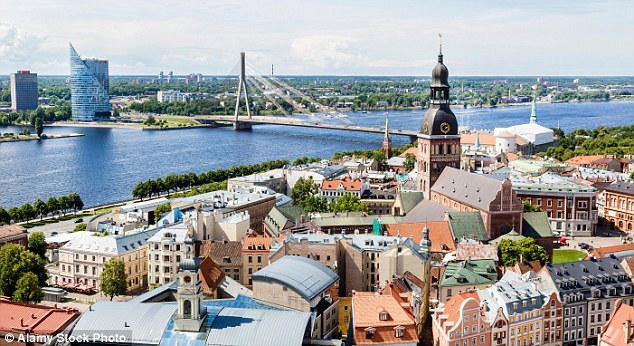 Last port of call: Latvia’s lively capital is the final stop on a trip along the ‘Baltic Highway’

We are driving a section of the ‘Baltic Highway’, the road that follows Latvia’s beautiful coastline. The Cape marks the stormy latitude at which the Baltic Sea collides with the Gulf of Riga.

Trees ripped from the ground during a winter hurricane in 2005 are scattered like spillikins across the sandscape, semi-buried symbols of turbulent times.

Latvia is the largest of the three Baltic nations and has been independent since the collapse of the Soviet Union in 1990. For centuries Swedes fought Germans before the Soviets and the Nazis marched in and claimed it for most of the 20th century.

By contrast, here in Courland a small community of Finnish settlers has lived quietly since the Dark Ages, eking out a peaceful existence.

Dzeneta is one of the 200-strong surviving members of the local tribe, known as Livs and also the owner of Usi farm, where we are staying . ‘The tanks have been and gone, but we have stayed. We pray the Russians leave us alone,’ she says. She points to places of interest on a map I have just smeared with butter.

‘Come back in the winter and you can cross-country ski the length of Latvia, along the beach!’ Outside the rich and colourful port of Ventspils we stop at a restored Cold War spy station used for eavesdropping on the West. ‘I dare you to ask whether it is now being used to spy on the Russians,’ I say to my friend, Ana. Neither of us dares.

We cut inland for the medieval town of Kuldiga and dine at the Goldingen Room on the ancient square opposite the town hall.

Somewhat incongruously, we eat haute Mediterranean cuisine in a moody setting. I risk a glass of wine from the excellent list then drive into the forest to find Maras Manor, the lovingly restored home of our wonderful guide, Ilga, and her German husband. With its impeccable hospitality and acres of creaking wood, it is one of the finest chambres d’hotes I have ever stayed in.

The next day we head to the naval port of Karosta, adjoining the town of Liepaja, near the border with Lithuania. Off-limits in Soviet times, it housed the Atlantic submarine fleet and there’s a gruesome military jail where for €17 (£15) you can spend the night. ‘But I wouldn’t if I were you,’ says our guide, a former prison guard. ‘You won’t like it.’

Beyond the barbed wire is a domed Russian Orthodox Cathedral and in town we walk through a lively market to get to the House of Craftsmen, where the largest amber in the world resides. Here, women toil on looms and weave baskets.

North up the Baltic highway is Jurmala, where many of Russia’s super-rich own holiday homes. From our penthouse room at the groovy Semarah Lielupe spa hotel, we see that they are not so much homes as mini palaces. ‘Jurmala is Cannes and Martha’s vineyard all in one,’ coos Ana. She’s looking down at the shopping street. I steer her to the gorgeously wide beach, then the hotel spa for a steam bath.

Our last stop is Riga, where we check into the four-star Semarah Hotel Metropole, the grand old lady of the capital. Well run and reasonably priced, it is handily placed between the station and Riga Old Town. 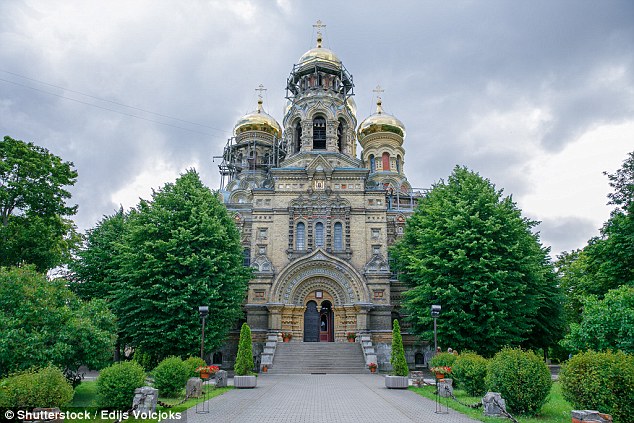 Majestic: The golden domes of the St Nicholas Orthodox Sea Cathedral in Liepaja

Our last night is at the opulent Grand Palace Hotel. In the marbled cocktail bar, the air is distinctly smoky.

I ask the waiter. ‘If our guests want to smoke, they smoke.’ Russians like to smoke. And there’s nothing wrong with the smell of a Montecristo A. No trip to Riga would be complete without testing some of its great restaurants.

Biblioteka N°1 is where chef Maris Jansons — the Heston Blumenthal of Latvia — has created a contemporary Baltic temple to gastronomy, in a library.

With its open kitchen and modern cooking, 3 Chefs in the Old Town, is the buzziest spot to be seen.

Rocket Bean Roastery, in an old sock factory, is where Michelin-starred chef Arturs Taskans combines beetroot with chocolate and cooks up a storm in one of Riga’s newest ventures.

Air Baltic flies from Gatwick to Riga from £85 return, airbaltic.com. Doubles at the Metropole from £44, metropole.semarahhotels.com. Maras Manor from £48, marasmanor.info. Grand Palace Hotel from £133, grandpalaceriga.com. The Lielupe from £71, semarahhotels.com. Car hire via Hertz at Riga Airport, hertz.lv.