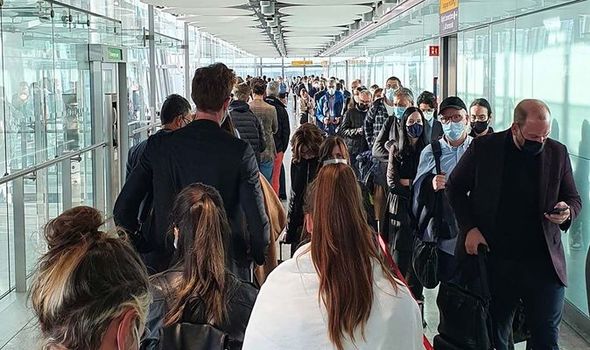 Travellers arriving at Heathrow yesterday were forced to either wait in long queues in terminals or remain on aircraft. Gatwick and Edinburgh airports were also affected.

E-gates, managed by UK Border Force, allow travellers with biometric passports to pass through border control without a manual inspection.

The Home Office said the latest problem was caused by a “technical issue”. A systems failure caused e-gates to stop working for several hours on September 24, so passengers had to wait to have their travel documents inspected by staff.

Passengers at Heathrow yesterday morning described the queues as a “total disgrace”.

Christian Jones said he was queuing for around an hour on his way back from a trip to Finland. The 41-year-old from Cambridge said: “The queues were snaking out of the arrivals hall all the way down the corridor and into the connecting flights corridor.

“I queued for one hour but others, I believe, queued for about four hours.”

A woman, who gave her name only as Vibhaker, was waiting at arrivals in the airport for her niece. She said: “The whole area was a total shambles, heavily crowded with no possibility of social distancing.”

Passenger Thomas de Lucy tweeted: “Not only are we waiting for two hours at passport control. But Heathrow staff are all incredibly rude, shouting at people and ignoring others. Maybe a supervisor should be on hand to control staff behaviour.”

A Heathrow spokeswoman said: “This issue, which impacted a number of ports of entry, has since been resolved and the e-gates at Heathrow are back up and running again.”

A Home Office spokeswoman said: “We apologise to all passengers.”