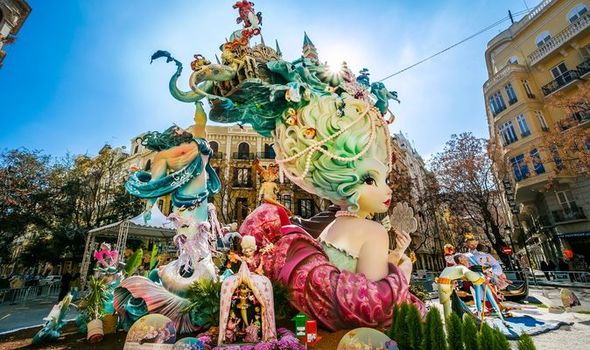 From tomatoes to paper mache fires, attending a Spanish festival is a once in a lifetime experience. All festivals are dependent on Covid restrictions.

More than 250,000 people flock to Tenerife to celebrate carnival in February with colourful costumes and dancing.

The Tenerife carnival takes place over a whole month but the week leading up to Ash Wednesday is normally the biggest.

Described as the ‘second most popular carnival in the world’ after Rio, the Santa Cruz de Tenerife Carnival dates back hundreds of years.

Performers’ costumes can weigh as much as 100 kilos and take months to prepare. Expect music, dancing and colourful floats.

One of Spain’s most incredible fiestas, the Fallas of Valencia lights up the Spanish city for a week.

Residents create huge fairytale-like figures out of paper mache before displaying them in parades through Valencia’s streets.

At the end of the week, the massive figures are burned down in an incredible bonfire ceremony.

It is said the festival originated from an old carpenter’s tradition of burning wood during the spring.

The beautiful Spanish city of Cordoba is famous for its peaceful inner courtyards filled with flowers and secrets.

Close to popular expat areas on the Costa del Sol, Cordoba is an easy trip from many hotspots.

In the first week of May, Cordoba Town Hall arranges a courtyard competition where owners decorate their courtyards with stunning flowers.

Throughout the competition, owners open their courtyards for visitors and tourists to explore.

At the beginning of June, the city of Marbella pays homage to its patron saint, San Bernabe with a weeklong fair.

Marbella chooses a king and queen to host the festivities and tourists can enjoy special food and entertainment.

The day fair is normally held in Marbella’s old town while the night fair takes place a little outside the town.

Tourists can expect the party to go on all night long with a firework display taking place near the El Fuerte hotel.

Perhaps one of Spain’s most famous festivals, La Tomatina is not for the faint of heart.

One of the world’s biggest food fights, festival goers cover each other in hundreds of tons of overripe tomatoes.

The tomato war sees visitors hurl tomatoes at each other and takes place in the town of Bunol, not far from Valencia.

There are no winners in this messy festival as everyone tends to leave covered in sticky tomato juice.