A real ice breaker: Get close to bears and whales on this incredible expedition cruise through the wilds of Alaska

When the Russians sold Alaska to the U.S. in 1867, they thought they’d got one over on the Americans. It was a vast, barren land, expensive to maintain and their settlers had hunted the indigenous sea otters to extinction, killing off the lucrative fur trade.

What a mistake. Alaska is pure gold. The landscapes are vast, the fjords deep, the mountains capped with snow and massive glaciers come tumbling down to the sea.

It’s twice the size of Texas and five times bigger than the UK. No wonder its first inhabitants called it Alyeska, or ‘great land’. 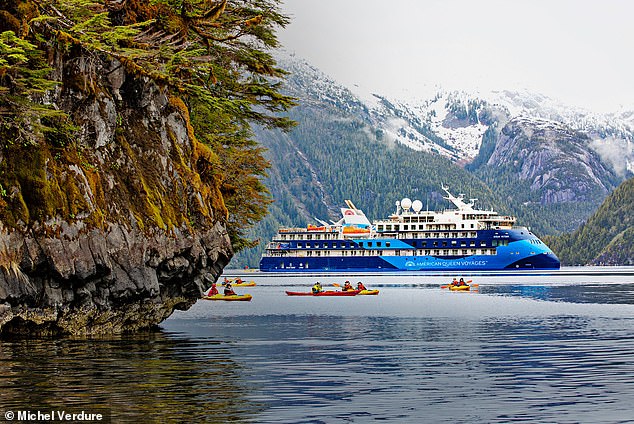 Majestic: Jane Archer boards American Queen Voyages’ expedition cruise ship Ocean Victory for a cruise around the Alaskan wilderness, stopping off in Misty Fjords on the way (above) 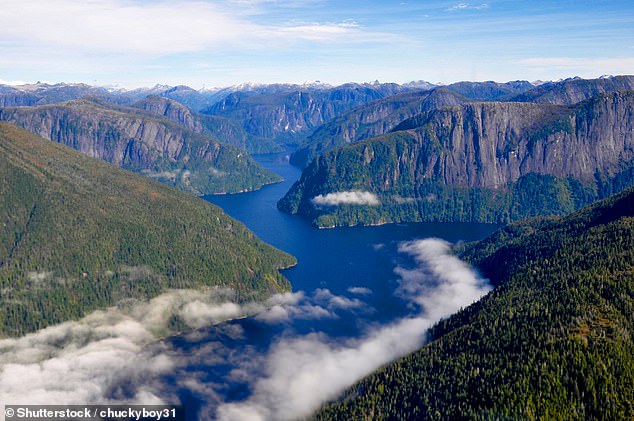 Not for us the touristy Ketchikan, Juneau, Skagway triangle favoured by the hundreds of big ships that bring thousands of tourists here every summer. Instead we’re calling into Ward Cove, Wrangell, Petersburg and tiny Kake, population 500, and anchoring in pretty bays and close to glaciers to learn about local culture and ice, and hopefully get some wildlife close-ups.

Ocean Victory has an X-bow front that cuts through waves rather than riding them, and an extra strong hull for sailing through ice; entertainment is a lecture or two about whales and explorers and a guy on the piano at cocktail hour, and there’s a mud room where we tog up to go out in zodiacs and kayaks to find wildlife and glaciers.

There are plenty of creature comforts as well. The service and food is excellent, the cabins roomy — and mostly with balconies (binoculars are strewn about the ship in case a whale hoves into view) — and drinks are included. 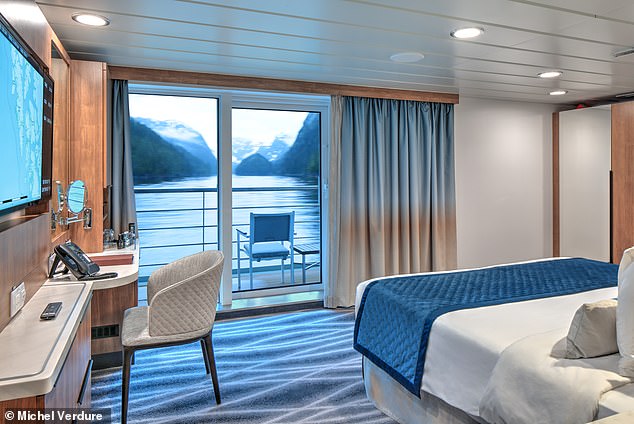 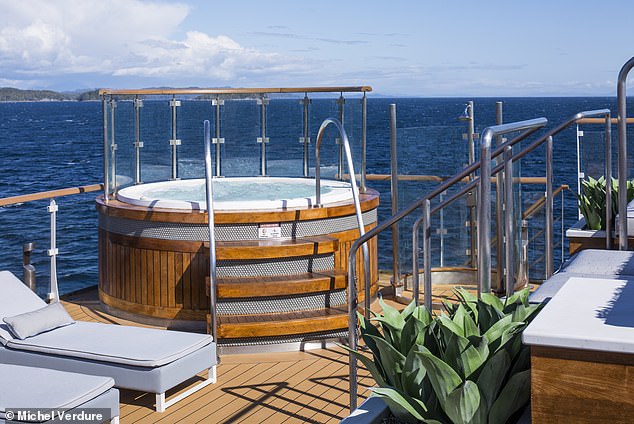 Jane says that there are ‘plenty of creature comforts’ on Ocean Victory. Above is the ship’s outdoor hot tub

The ship holds 186 passengers but there are only 85 of us on board, mostly from America, ranging from two students just out of college to a 97-year-old World War II veteran who wows everyone by kayaking and zodiacing.

In charge of us all is an 18-strong team of naturalists, marine biologists and kayakers who get us ashore and on the water.

Thanks to their encyclopedic knowledge of all things Alaska, we learn everything from surviving in the wilderness to how drones collect whale snot to analyse stress levels. 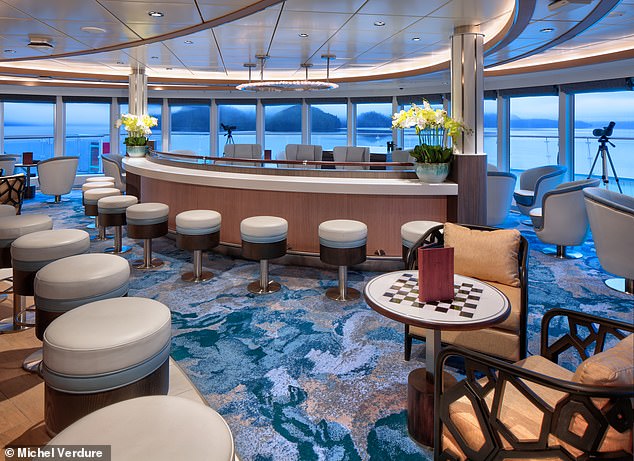 Entertainment on Ocean Victory is a lecture or two about whales and explorers and a guy on the piano at cocktail hour, Jane reveals 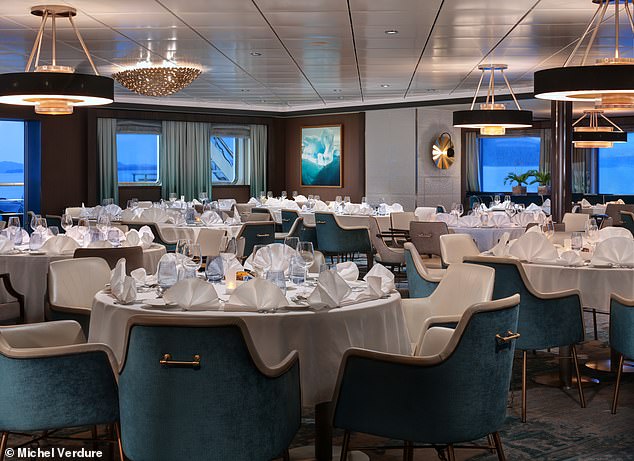 Drinks are included on the ship and the food is ‘excellent’ 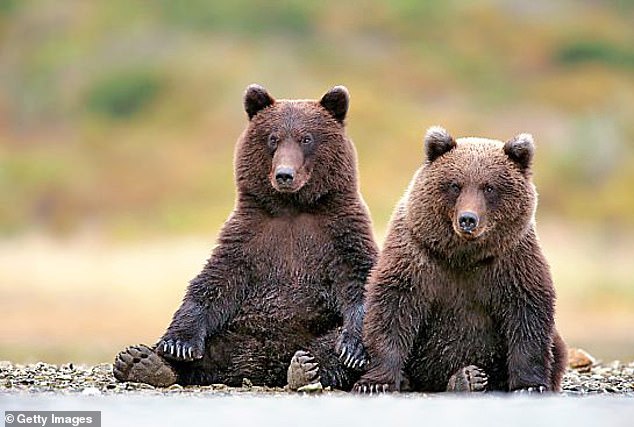 We’re sailing from Vancouver to the Alaskan town of Sitka, a journey that takes ten nights and spends the better part of the first two days sailing a narrow island-strewn passage in Canada lined with millions of trees.

With not a house or settlement to be seen, it’s solitude in spades. Gosh, this is one big country and we’re not even in Alaska.

Day three and we’ve arrived in Ward Cove, a working dock about seven miles from the bright lights of Ketchikan, and I’m joining an included tour to the world’s biggest collection of Totem poles. All very cultural, but I’m itching for the real adventure to begin. I don’t have to wait long as the next day we’re in Punchbowl Bay, in Misty Fjords, for our first expedition. We’re split into four groups, each with kayaking, zodiac cruises, lectures and hands-on science to fit in, often with barely an hour between activities. 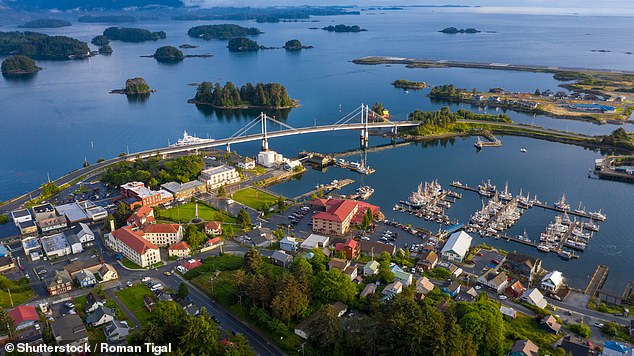 Jane’s cruise takes her from Vancouver to the Alaskan town of Sitka, above, a journey that takes ten nights 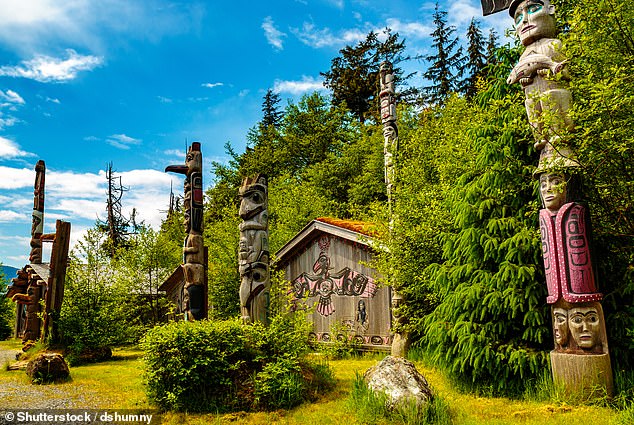 By the end of the day I’ve had a lesson in bird-watching in Alaska, attended a lecture about whales, clocked up nearly four hours in kayaks and zodiacs, and ticked off bald eagles, a mountain goat and loads of starfish.

Over the next few days I add moose, deer, bears, whales, seals and more bald eagles to my wildlife tally.

In Wrangell, I join Grace for a hike through Tongass National Forest, a temperate rainforest that covers 17 million acres of Alaska. 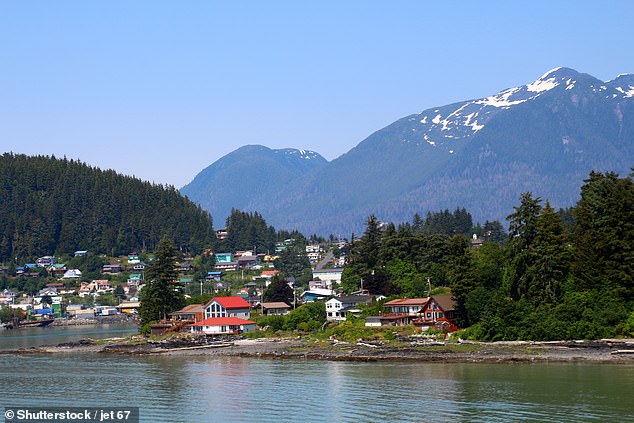 Teaching passengers about local culture, the cruise anchors in pretty bays and cities such as Wrangell, above 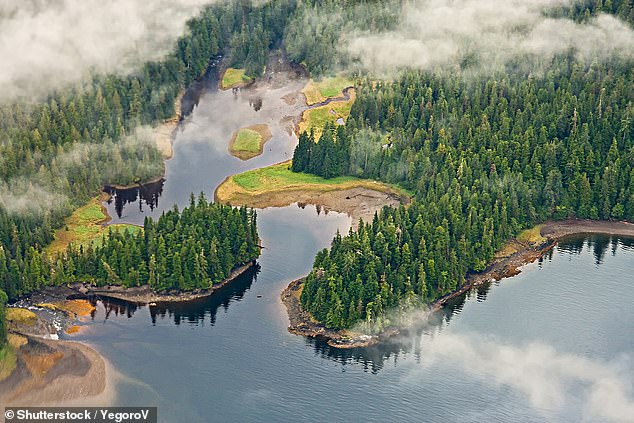 A highlight is a hike through Tongass National Forest, pictured, a temperate rainforest that covers 17 million acres of Alaska 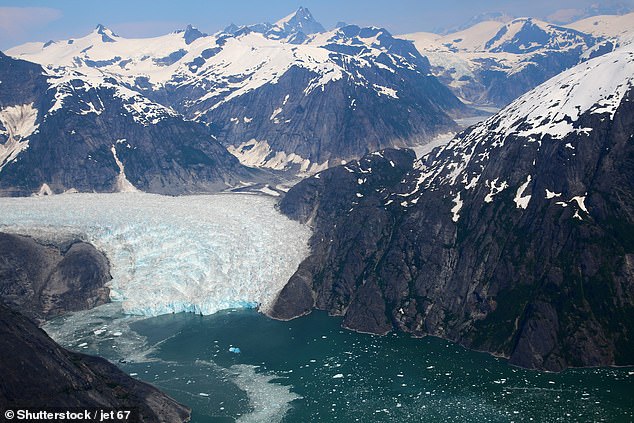 Jane goes on a jet boat trip to LeConte Glacier (above), a massive wall of ice that’s almost a mile wide 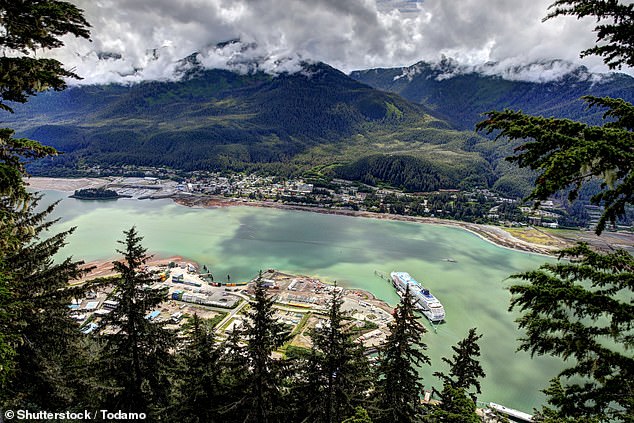 Jane’s cruise avoids Juneau, above, a spot favoured by the hundreds of big ships that bring thousands of tourists to Alaska every summer

Then there’s my icebreaker moment on a jet boat trip from Petersburg to the LeConte Glacier, a massive wall of ice almost a mile wide. Back in the zodiacs, we get close to a raft of sea otters and see the mums swimming on their backs with their pups on their tums.

They’re a Californian variety, introduced to Alaska in the 1960s, and judging by the numbers they love it here. I know how they feel.