SAN FRANCISCO — Guests of the new Hotel Castro use a smartphone app to check in and a personal key code to unlock the hotel’s front door and their room. If they’re looking for a place to get a latte or lunch, they text the boutique property’s virtual concierge.

What they won’t find is an on-site staff member, for at least part of the day.

The property, which opened Jan. 3 in its namesake neighborhood, was purposefully built to rely heavily on digital services. And although this was decided well before Covid-19 arrived, it’s a model that seems tailor-made for the travel trends boosted by the pandemic.

Developer Gannon Tidwell was hunting for operational efficiencies when he started the project in 2017, in order to make the math work on a 12-key hotel in one of the most expensive real estate markets in the U.S.

To run the Hotel Castro, he chose Kasa Living, an operator that specializes in using technology to centralize services and reduce staffing needs.

“There is a belief among many people in the industry that this labor shortage is not just about money, but it’s a deeper, structural change,” said Cornell University hospitality professor David Sherwyn. “What you’re seeing is a lot of hoteliers moving to technology to keep operations going. A lot of people are just as comfortable now with an app or text to the concierge as opposed to going and talking to them, and there is a movement toward this model and definitely a market for it.”

Kasa Living launched in 2016, steadily expanding prior to the pandemic. Since the beginning of 2020, Kasa has ballooned from operating 18 properties across 14 cities to more than 70 properties in over 45 markets in the U.S. and Japan, a mix of hotels and residences.

Kasa is not the only tech-focused hotel company experiencing rapid growth. England-based Yotel operates a similar model and plans to expand from 19 to 50 properties in the next five years.

“It’s just a more efficient model for the smaller hotels,” said Kasa Living founder and CEO Roman Pedan. “That’s why you’ve seen the hypergrowth. We’ve helped some properties reopen that shut down during the pandemic and were struggling to figure out how to continue.” 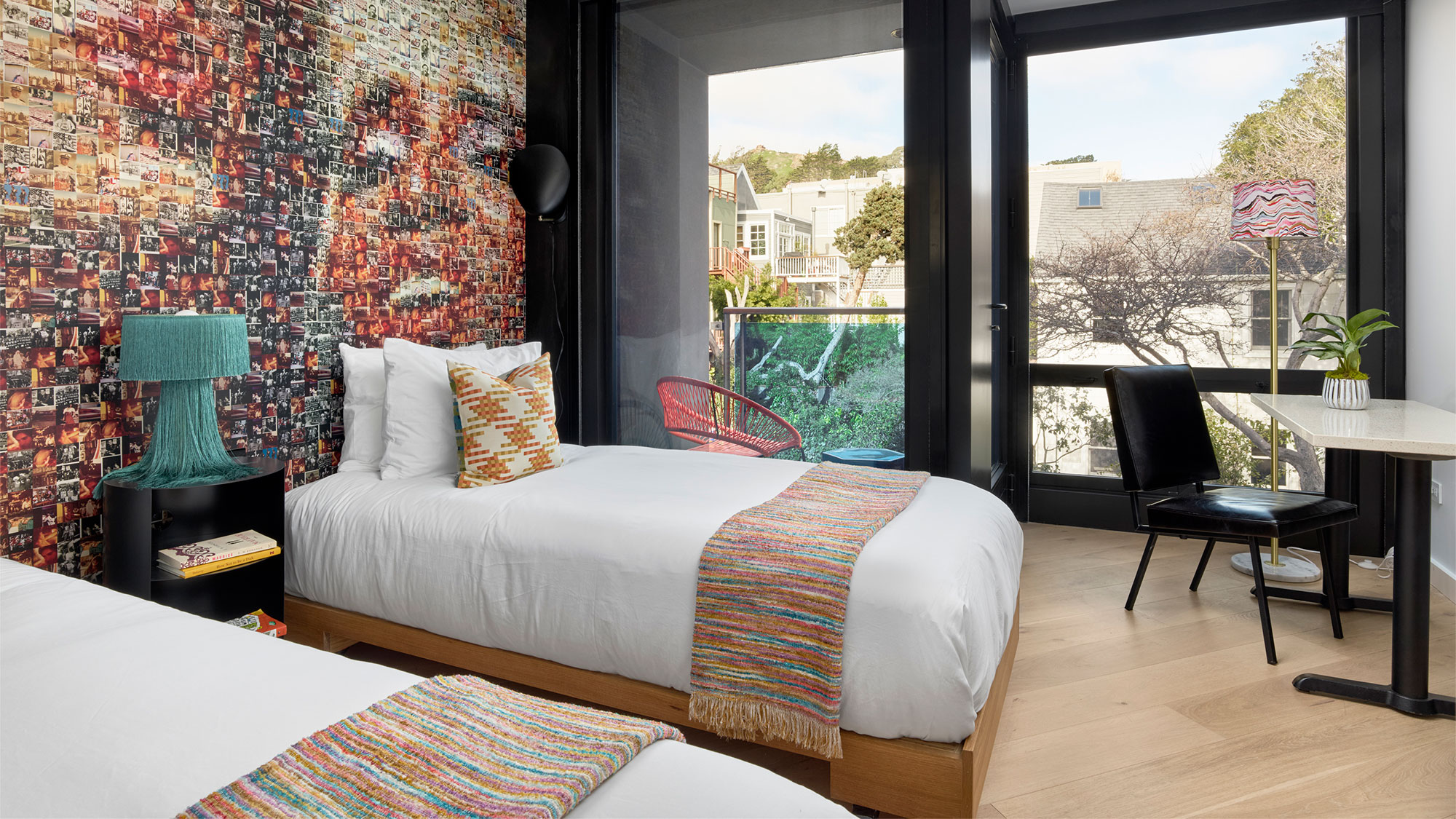 “We want to use technology — not to get in the way of service but to enhance service,” said Pedan. “So we will be there when you need us, and otherwise, we’ll stay out of your hair. And I think a lot of travelers prefer that.”

Each room has a decibel meter and sensors that detect cigarette and marijuana smoke, to help monitor for potential disturbances. Individual properties can set and adjust their decibel limits. Guests partying late into the night might get a text message alert and then another message if the noise level does not fall, followed by a phone call or an in-person visit.

“We couldn’t afford a guest experience team like Kasa provides at the local level just for the Hotel Castro,” Tidwell said. “But we have the benefit of scale by working with Kasa to be able to leverage their team that is available 24/7.”

Working out the kinks

A rooftop patio offers views of the Twin Peaks neighborhood and the Salesforce Tower, and a ground-floor cocktail lounge serving small plates is scheduled to open this spring. But the heavily technology-driven model also means additional considerations are needed for each market to make guests comfortable.

Kasa’s standard guest terms allow for “background screening” for safety and security reasons, a policy that Pedan said originated with owners who operated mixed-use residential and hotel properties. When the Hotel Castro opened, some San Francisco residents took to Twitter with privacy concerns that were then covered by Bay Area online publications.

Tidwell nixed the screening policy, but it remains in place at the majority of Kasa’s other properties.
Tidwell said he wanted the hotel to be consistent with industry standards and also was sensitive to embracing inclusivity in a neighborhood like the Castro.

“That’s the nice thing about working with Kasa,” Tidwell said. “They really respond to the needs of the local market, and they can adjust their policy to each individual property.”

“At the end of the day, a lot of this is in its infancy, and there are going to be some kinks to work out,” said Daniel Lesser, CEO of LW Hospitality Advisors. “I do believe this is the wave of the future and the beginning of a huge technological revolution for the lodging industry.”