When we turn on a tap, we in the developed world expect an endless stream of clean water to gush out. Like popping a pill when we have a headache or biting into a strawberry mid-winter, it’s a modern privilege most of us are barely even aware of.

But South Africans are coming to the daunting realisation that the right to water and sanitation – one of the defining aspects of life in the developed world – is not something to take for granted. As Cape Town creeps towards “Day Zero” – the moment, currently scheduled for 12 April, when all municipal water is turned off – the sense of growing panic is palpable.

Helen Zille, premier of the Western Cape, has called this drought the “greatest disaster a Western city has experienced since 9/11”. South African water expert Anthony Turton tells The Independent: “After Day Zero, Cape Town will revert back to medieval times when diseases like cholera and possibly even the plague emerge, as sewers block up and hospitals are overwhelmed.

“It will be like a refugee camp, dependent on aid from donor agencies and international humanitarian organisations.”

Here in Cape Town, I’m writing this under the hot January sun, and the water is still on. But we are on stringent measures – currently 87 litres per person per day, dropping to 50 litres from 1 February – done in the hope of staving off Day Zero by saving enough water until the autumn rains begin, hopefully, in May. Anyone exceeding 50 litres from next month can expect major fines, possible jail time and a hefty dose of public shaming thanks to an online map that marks out the greatest water wasters with a colour-coded dot.

To put it in perspective, the average Briton uses 200 litres a day. In Cape Town today, dishwasher and washing machine usage has to be severely curtailed, so we’re eating off paper plates and wearing the same clothes for a few days in a row. It’s safe to say, nobody is looking glossy.

In a particularly hot summer, private pools are covered to prevent evaporation, public pools that don’t use sea water are mostly closed, while many gyms have blocked off their showers. In a city surrounded by beaches, however, these are all manageable hardships.

Every day, there are small changes. Hairdressers are doing dry cuts; cafes and restaurants offer drinks in takeaway cups and won’t serve tap water. Gardens are dying under the hot sun, wildfires have started sparking on Table Mountain and public loos are being left unflushed by an increasingly conscientious public. Not exactly Dickensian, but a definite departure from Cape Town’s sleek image as a travel magazine cover star.

Buying drinking water has become a daily occupation. At the supermarket yesterday, there was a frenzy to grab bottles as they were being delivered, and staff had to limit each person to four litres. Queues for the natural springs in Newlands, a central suburb, are growing longer by the day and are now watched over by the police.

But far more concerning is the fear of what the future brings. At every braai, dinner or drinks party, talk inevitably turns to Day Zero; friends on the dating scene say quips about it have even become an opening gambit on Tinder.

The public thirst for knowledge is understandable, particularly since we have been kept largely in the dark so far. What we do know is that unless dam levels magically stop dropping, from 12 April, people will be collecting 25 litres of water each, from one of 200 “pods” around the city, all of which will be guarded by the army. Certain hospitals and parts of the Central Business District will probably be exempt, including hotels within this perimeter.

The questions are endless. How much rain do we need to reverse it? If each pod serves 5,000 families, how long will the queues be? Can the sewage system continue to function without running water? If not, will chemical loos be set up on each street? Can schools and businesses stay open without overhead sprinklers? What about the health implications, particularly in poorer parts of the city? Could this lead to riots or civil unrest?

“I am very worried,” Harry Mvula, a cleaner who lives in Muizenberg, told The Independent. “There are many people where I live. How can I queue for water every day and get to work on time? They are already shutting off the water in my home some evenings and I am scared of what next month will bring.” 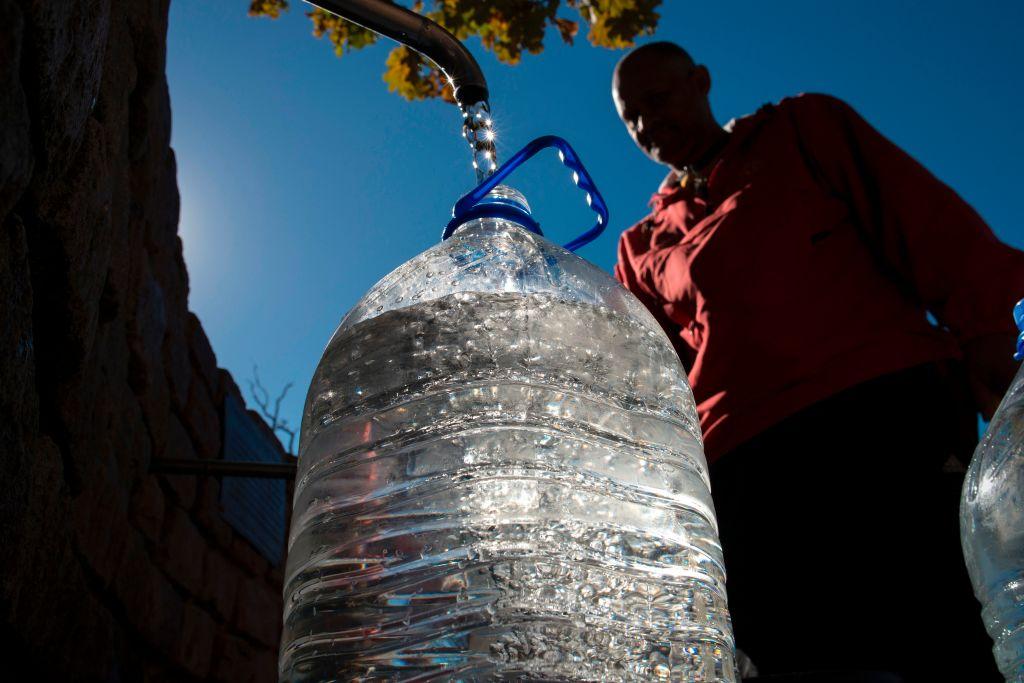 Equally, how will people who work in hospitality or agriculture survive when the inevitable drought-related lay-offs begin?

“This is predicted to be the smallest wine harvest since 2005,” says Alistair Kreft, chief executive of wine distributor Under the Influence. “In the Swartland a lot of the vines are dry farmed, and these producers in particular are really struggling. Overall though, vines are weeds and they’ll take a knock in terms of yield but should get though. Much more challenging is the impact on wine tourism.”

Because while the beaches are as picture perfect as ever and the mountain walks brown but still spectacular, the question of whether tourists should even be in the city is a complicated one.

It’s something I’ve been asking myself all month. I live in London, but I spend December to March most years working from my parents’ house in Cape Town, the city I was born in. I now feel a twinge of guilt every time I take a fleeting shower, knowing I could be washing with Thames Water instead.

But as worried as locals are about Day Zero, they are equally concerned about destroying the tourist industry. “It’s a tough one,” says Kreft. “The value tourists bring to the economy has to be weighed against the impact on limited water resources.”

Anyone getting on a plane certainly needs to adapt fast – or find a hotel with a borehole and access to groundwater, which includes most establishments in the winelands and a number of larger central hotels like the five-star Belmond Mount Nelson. In these hotels, swimming pools are often still open and guests can use water freely, though everyone is strongly advised to avoid baths and long showers.

“We absolutely welcome visitors to Cape Town with open arms, but they must be prepared to fully comply with the water restrictions,” says Nina Elvin-Jenson, the owner of local travel company, Cape Concierge.

This includes anyone staying in a flat or villa without access to ground water – although it is the owners rather than the visitors who will be fined for any excess usage. B&Bs and hotels have now been given an extra dispensation to use municipal water in a bid to keep the tourist industry alive, but all guests are asked to be as careful as possible.

“I suggest people come here for a day or two to see the sights but then move onto one of the towns nearby that have no water restrictions, like Hermanus, Greyton or Plett,” Elvin-Jenson continues. “The situation has become fairly uncomfortable in recent weeks and I suspect those who have the means to not be in Cape Town in April, will choose to leave. 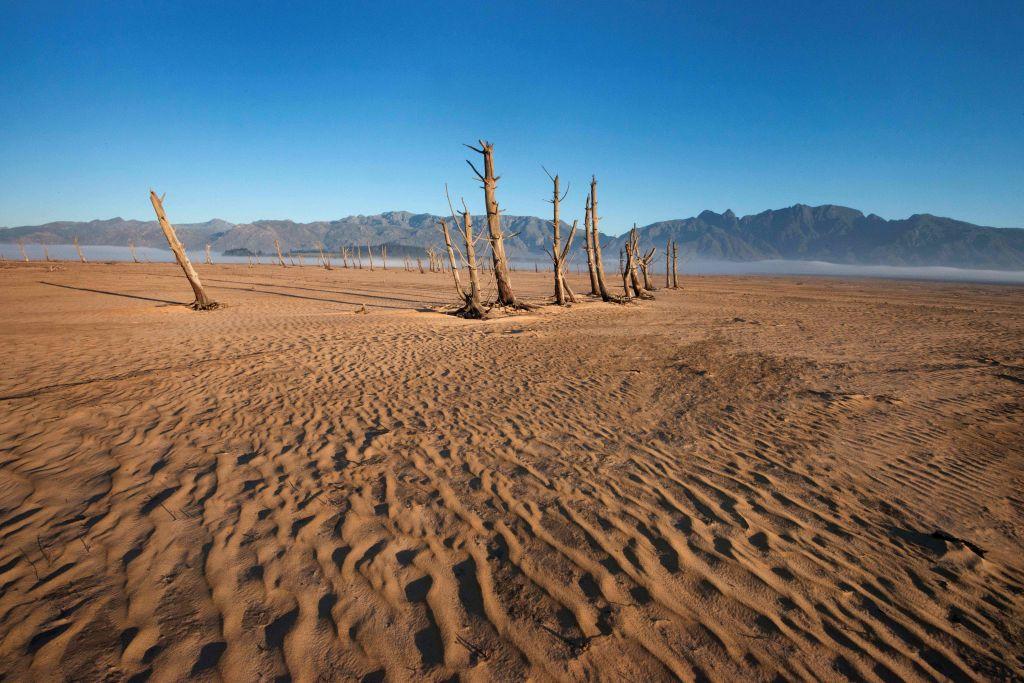 “But what I do love about this city is the extreme positivity of its people, who will not let this disaster strike them down.”

Positivity, bravery, ingenuity and daily rain dances (at the mayor’s request) – Cape Town will need a lot of all four in the coming months.