Brighton first found popularity as a tourist destination in the 18th and 19th centuries, when it had the cachet of being the weekend getaway for the Prince Regent – and it’s been known as a fun, flirty seaside town ever since. It’s long had a reputation as a progressive, bohemian haven, with its thriving LGBT community, Britain’s first Green MP, and a population of students and artists. Here’s what to do there.

Brighton became a fashionable resort for the well-heeled in the late 18th century, transforming its image as a rundown fishing town. In the mid-1780s, George IV – notorious as an extravagant womaniser – built the Marine Pavilion as his seaside home, despite being laden with debt. Heavily inspired by the Near and Far East, the exterior has Indian influences while its interior is luxuriously furnished with Chinese objects and hand-painted wallpaper. Entry is £12.30, but it’s worth it for the Instagram potential. 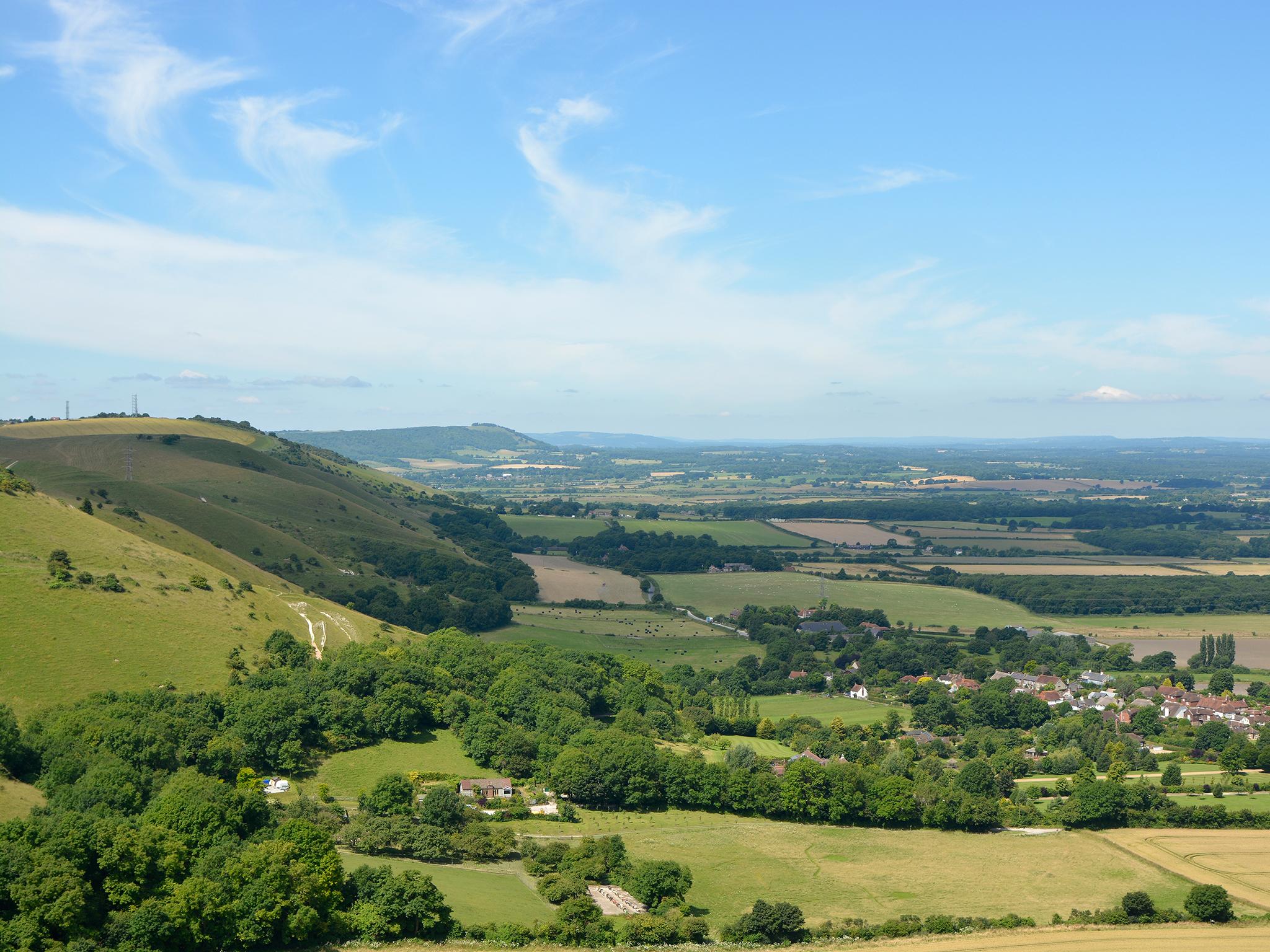 Take a stroll on the Devil’s Dyke

Brighton may be most famous for its beaches, but the city also borders the South Downs National Park – which includes the 100m valley known as the Devil’s Dyke. It’s so called because locals believed that Satan dug the trench in attempt to flood Sussex and destroy its many churches. The South Downs are steeped in folklore.

Part of the joy of the Devil’s Dyke is getting there. From April to September, there’s a special open-top bus service laid on from the city centre to the Downs. And all year round – except for Christmas Day – you can catch the 77, 78 and 79 buses from the same location. Those looking for an adventure can take a looping three-mile walk from the Devil’s Dyke to Saddlescombe, as recommended by the National Trust. A return bus ticket costs £4.50.

Have a night on the town

From its poptastic clubs perfect for hen and stag parties to the underground arts and music scene and quaint traditional pubs, Brighton caters to a myriad of tastes. For a night of chart bangers, head to West Street near the city’s ornate Victorian clock tower. If alternative music is more your bag, see what’s on at The Haunt or Concorde 2, both near the Brighton Palace Pier, while the Komedia hosts top-notch comedy and live entertainment. Or just sip on some local Harvey’s ale in one of the city’s 900 pubs. Although the whole city is proudly LGBT-friendly, dedicated spots include Revenge nightclub and The Bulldog pub, open since 1979. 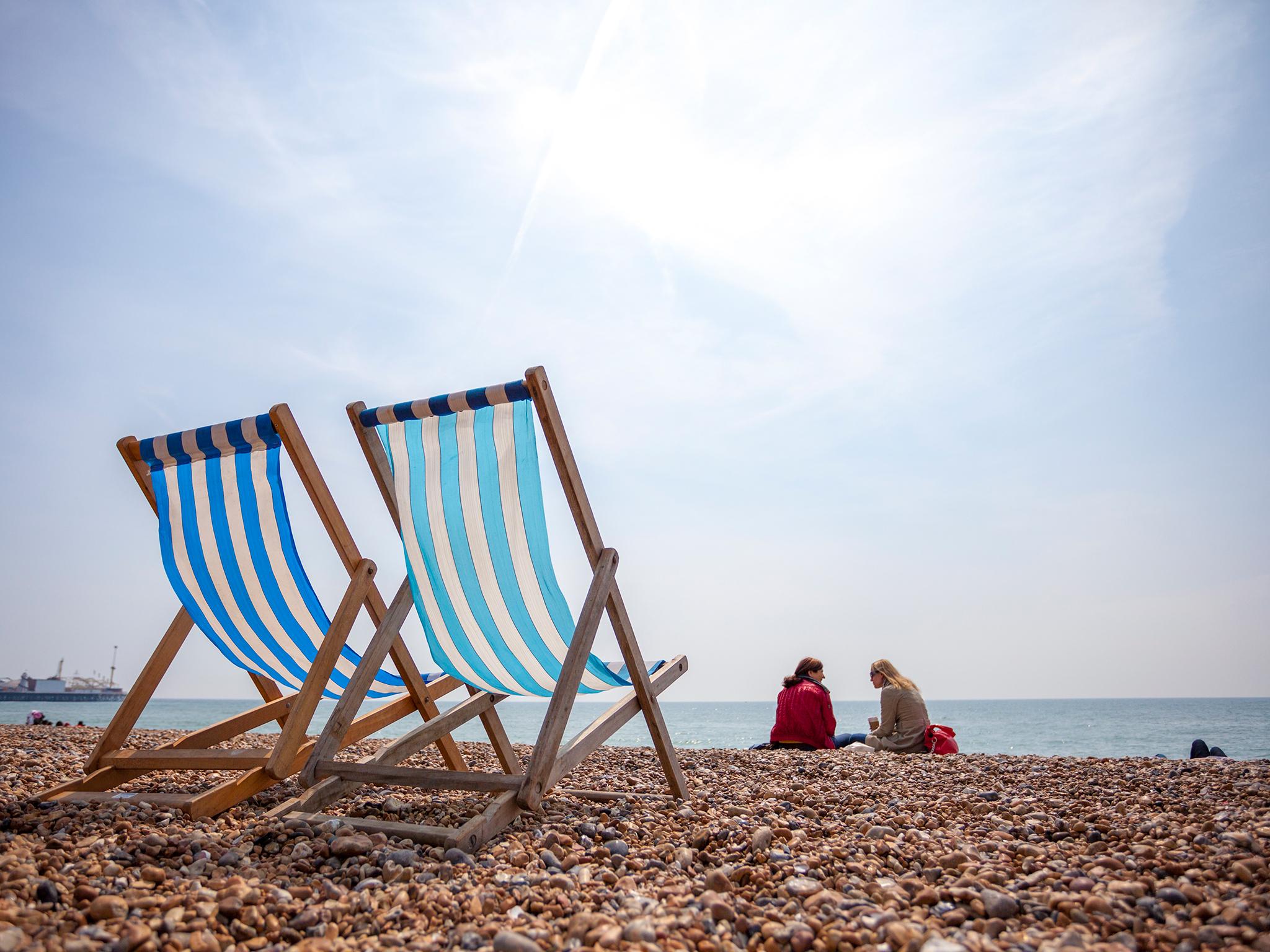 Hobble across the beach

If you’re hankering to plunge your toes into the sand of a sun-kissed beach, Brighton is not the place for you. The pebbled beach is a little unforgiving on the feet, and the water is never, ever warm. Still, that doesn’t stop millions of people visiting each year – and you might even say that pebbles beat soggy sand as the weather gets cooler. Beneath the turquoise railings of the Victorian promenade are restaurants, bars and pubs, as well as quirky independent shops to pick up unique knick-knacks and souvenirs. 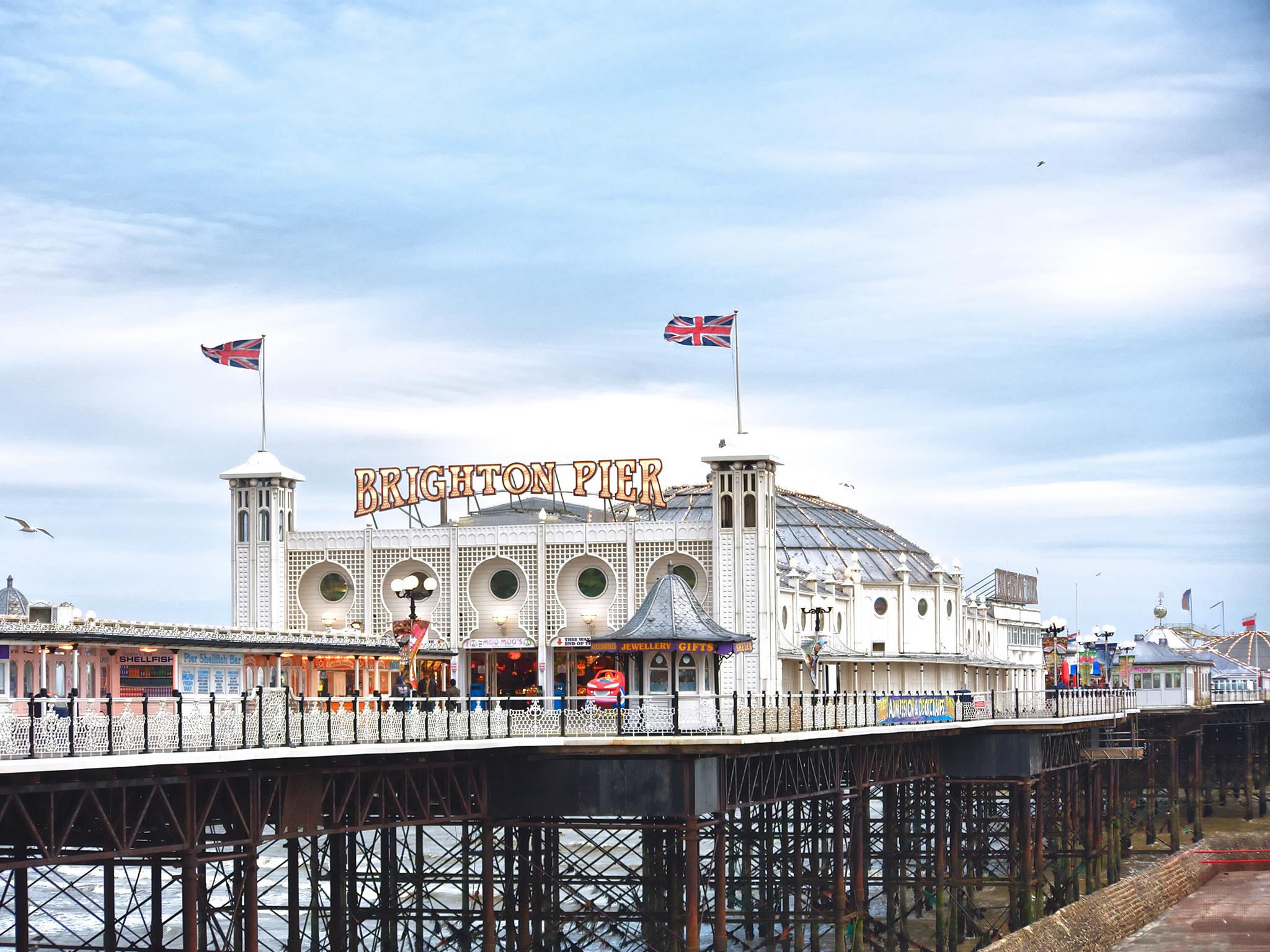 Gamble at the Brighton Pier

Built in 1899, this grade II-listed Victorian monument jutting 500m out into the sea is a relic of the city’s golden era as a destination for Londoners. In over a century, the attractions have been revamped to include rides – notably the Crazy Mouse whose tracks swerve nerve-rackingly close to the sea water, and the delightfully retro blue, white and red Helter Skelter. Meanwhile, rows upon rows of penny machines create quite a din in the domed amusement arcade at the centre of the pier. Dotted along the pier are stores selling seaside favourites including fried mini doughnuts, soft ice cream and the legendary Brighton rock. 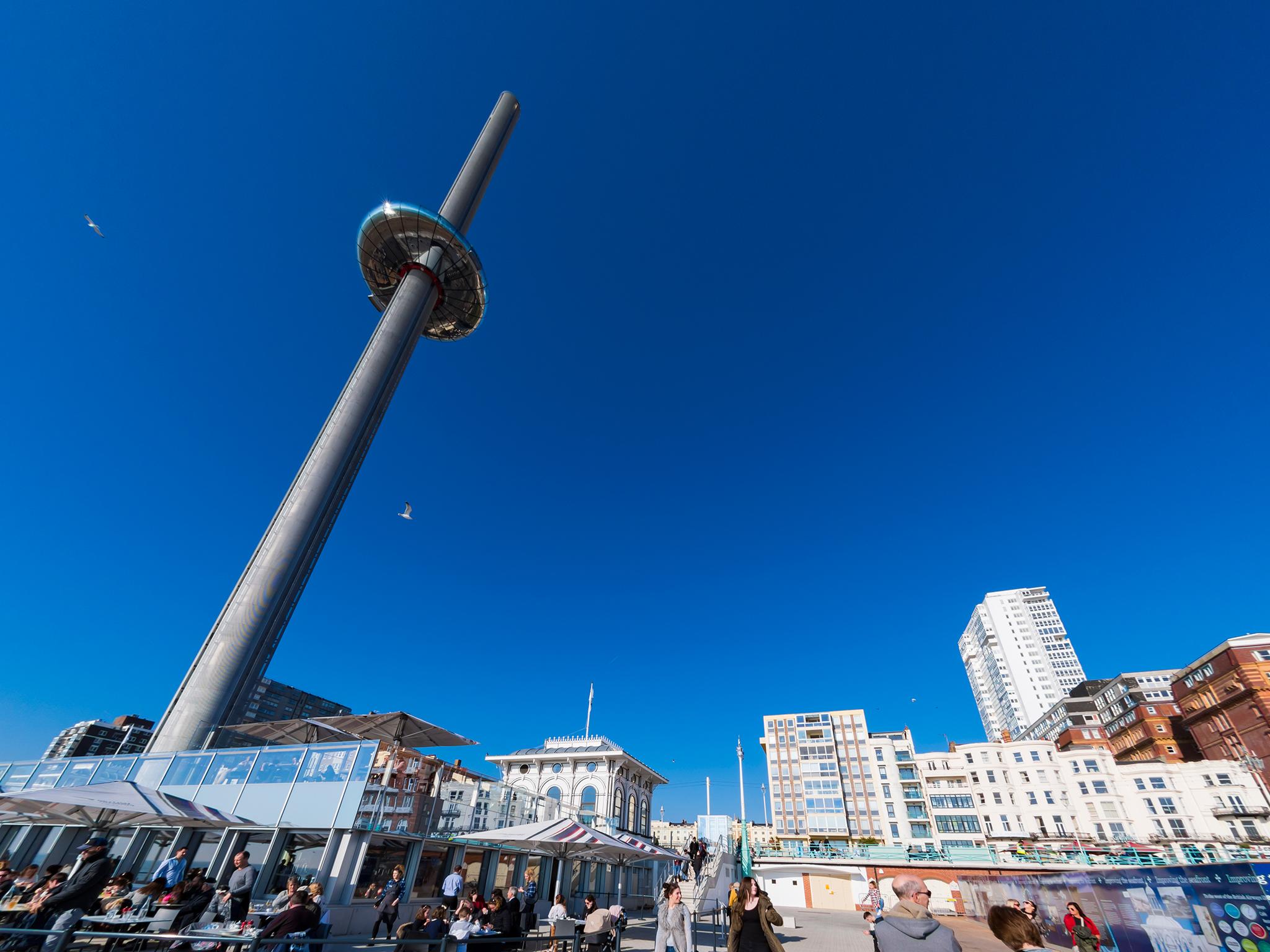 The i360 is a covered mobile viewing platform that moves up and down a tower standing 162m high above the promenade. Unveiled in the summer of 2016 and designed by the architects behind the London Eye, its futuristic mirror-bottomed pod holds up to 200 people and takes a good 20 minutes to reach the top. From there, the views stretch 26 miles across the English Channel one way, and the South Downs National Park the other. On a clear day, Bexhill and Chichester are also visible. Tickets cost £15, with a 10 per cent discount for online bookings.

Running for just over a mile between the Brighton Pier and the Marina, the Volk’s Electric Railway is the world’s oldest operational electric railway. Built in 1883 by pioneering electrical engineer Magnus Volk, the 40-seater carriage takes a 15-minute crawl along the seaside past the shops on Madeira Drive and the city’s nudist beach (fear not: it’s hidden by a pile of pebbles). Tickets cost £3.60. 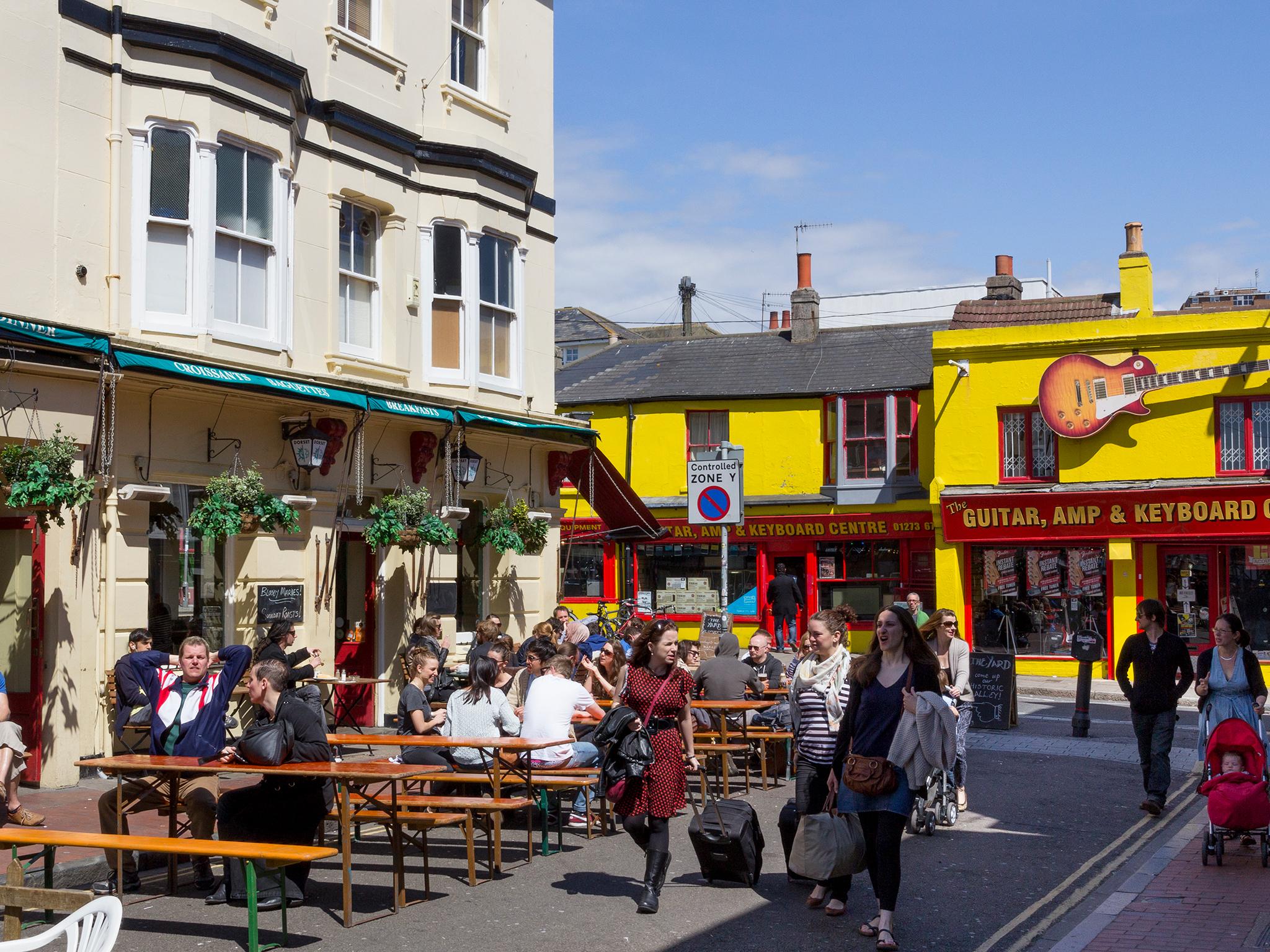 Shop in the Laines

Part of Brighton’s charm is its bohemian vibe, and the part of the city where this is felt most keenly in North Laine. The Laines – a Sussex term for an open tract of land at the base of the Downs – have long transformed from their days as a slum and slaughterhouse district; they’re now lined with independent clothing stores, restaurants, pubs and bars.

Brush up on local history

Brighton is dotted with characteristically eccentric and historic museums. The Brighton Museum and Art Gallery, situated on the grounds of the Royal Pavilion in the Prince Regent’s stables, has eclectic permanent collections which explore Ancient Egypt, 20th century art and design, and LGBTQ history – plus it’s free to visit. West of Brighton, the Hove Museum and Art Gallery is very family-friendly with its collection of toys in the Wizard’s Attic, as well as exhibits on the city’s film history. For more left field options, head to the free Booth Museum of Natural History, which is home to taxidermied birds, butterflies, fossils and bones; or the Brighton Toy and Model Museum, which specialises in mid-20th century creations.