Zipping along the Autobahn at a semi-respectable speed of 120km, I glimpse an enormous round grey tower looming in the distance well before the satnav tells me to exit. This is the Gasometer Oberhausen, a 385ft high gas storage tank turned exhibition space where Christo and Jeanne-Claude twice staged their monumental works. It’s my first stop on a road trip through western Germany’s Ruhr region, the former heart of the country’s coal and steel industry, whose now shuttered industrial sites are being reimagined as cultural hubs, parks and tourist attractions. 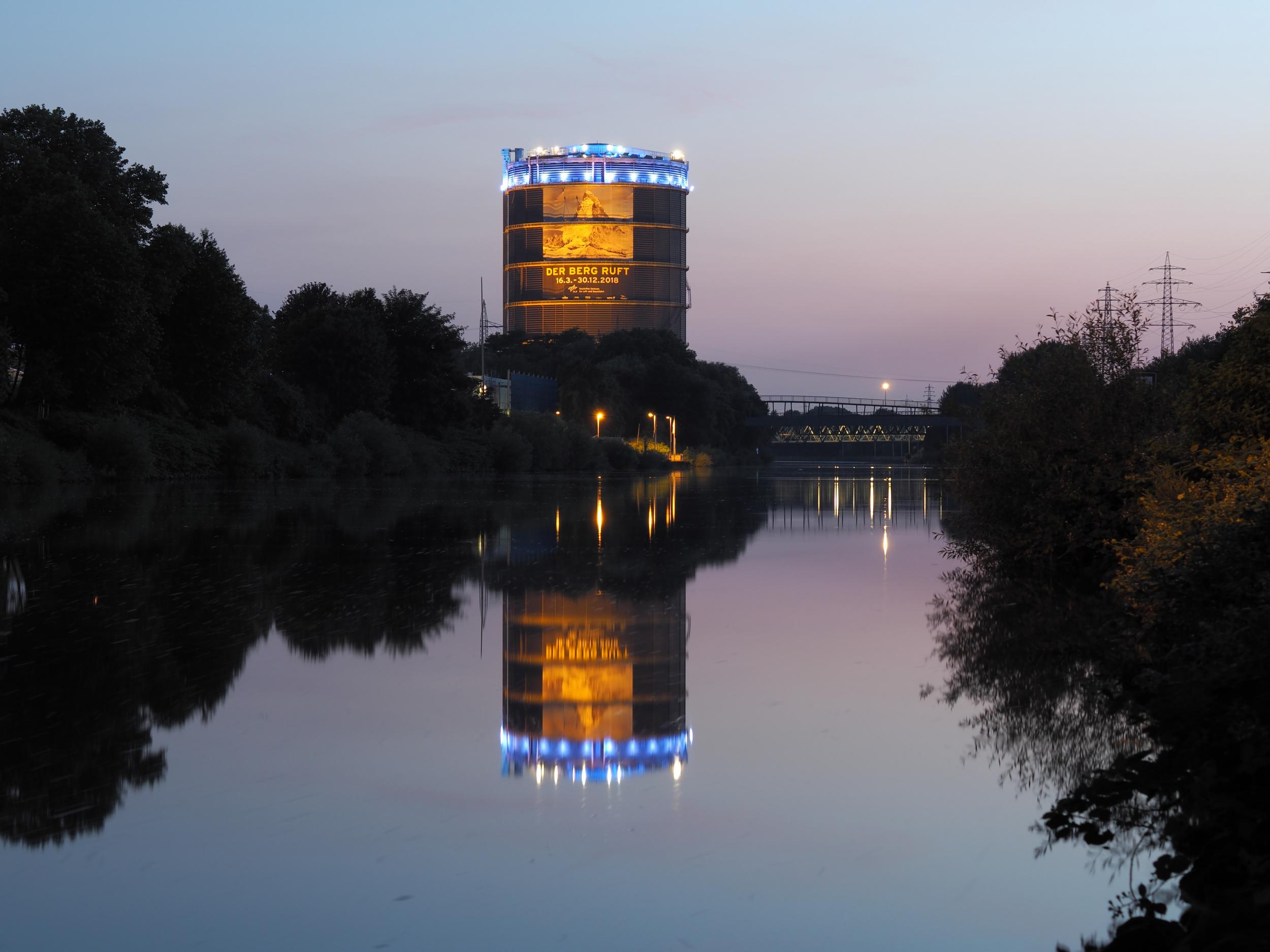 On this steamy summer day, crowds mill about the gasometer’s dark, cool interior, gazing at an eight ton replica of the Matterhorn suspended over a mirrored floor – the showpiece of the current The Call of the Mountains exhibit (€10/£9 entry). Impressive to be sure, but we’re also here for the trademark rooftop views. I join the queue and squeeze into a small glass elevator that whisks us up 10 storeys to an outdoor platform, followed by a white-knuckled climb up a metal staircase to the very top. Panoramic vistas of the Ruhr area surround me: a flat, densely populated landscape dotted with smoke-puffing chemical plants and crisscrossed by highways and railroad tracks.

No, this is definitely not the chocolate box Germany of castles, churches and half-timbered houses nestled in quaint rural villages. But the Ruhr’s hulking industrial relics possess a unique kind of beauty – a testament to the gritty manufacturing past that has shaped this region for more than 150 years.

Twenty-five of these sites form the backbone of the 250 mile Industrial Heritage Trail, stretching roughly from Duisburg, just north of Dusseldorf, through Essen, and east past Dortmund. The route was established in 1999 to reinvigorate the region following the decline of the mining and steel industries (the last working coal mine, located in the town of Bottrop, is set to close by the end of this year). 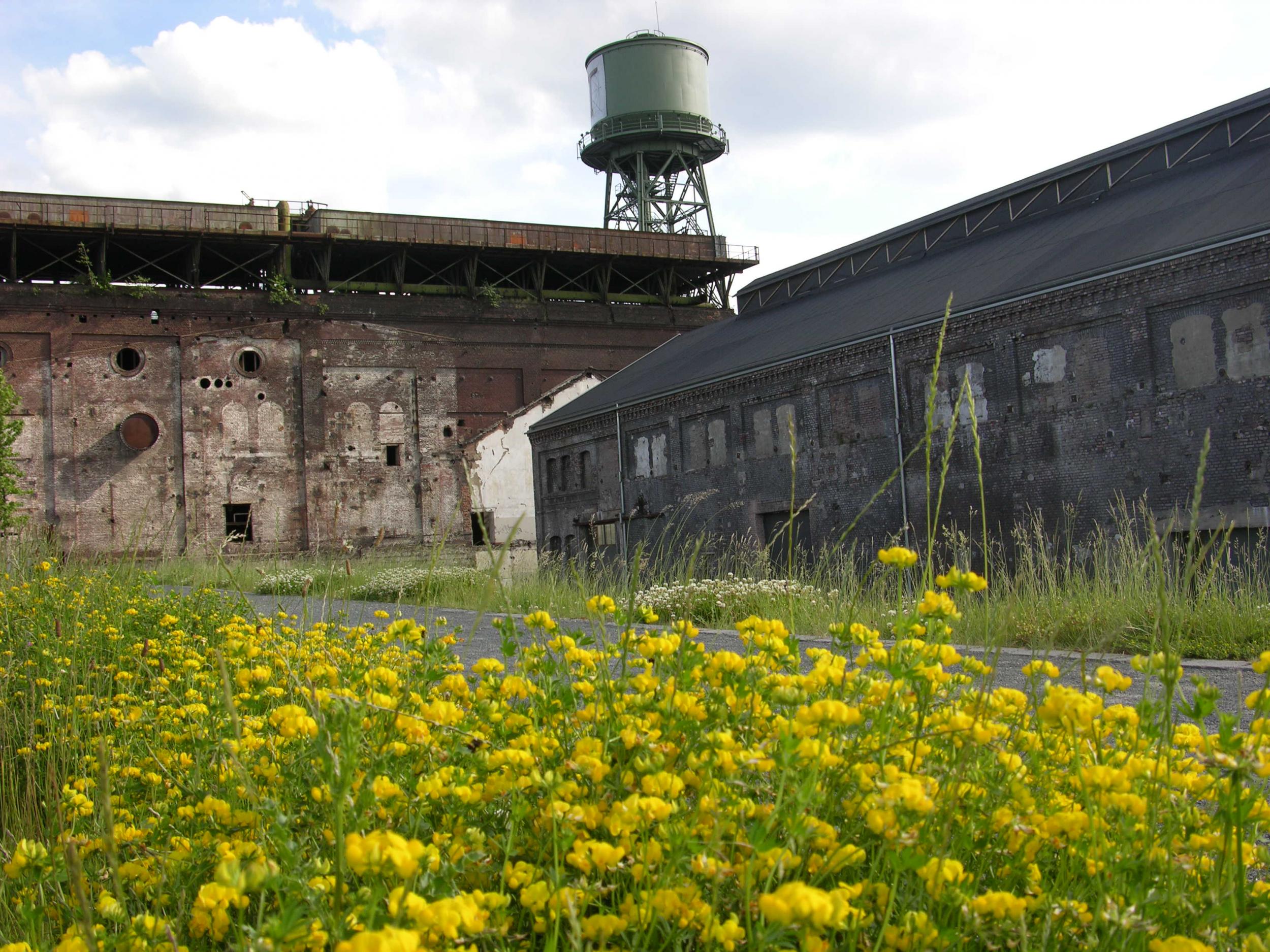 Best known is Essen’s Zeche Zollverein, a 19th century coal mine that closed in 1993 and was designated a Unesco World Heritage site in 2001. Home to the Ruhr’s famed 180ft tall twin-trestle winding tower, the sprawling red brick complex covers nearly 250 acres and today houses everything from a contemporary design museum (in a former boiler house redesigned by Sir Norman Foster) to a seasonal outdoor swimming pool (in the yard of the colliery).

A guided tour (€9.50) is required to get inside most of Zollverein’s structures, and the only ones given in English are on weekends. Unfortunately, it’s a Thursday, so I spend a bit of time wandering the complex, admiring the Bauhaus-style architecture, before driving east about 15 miles to Landschaftspark Duisburg-Nord (Landscape Park). 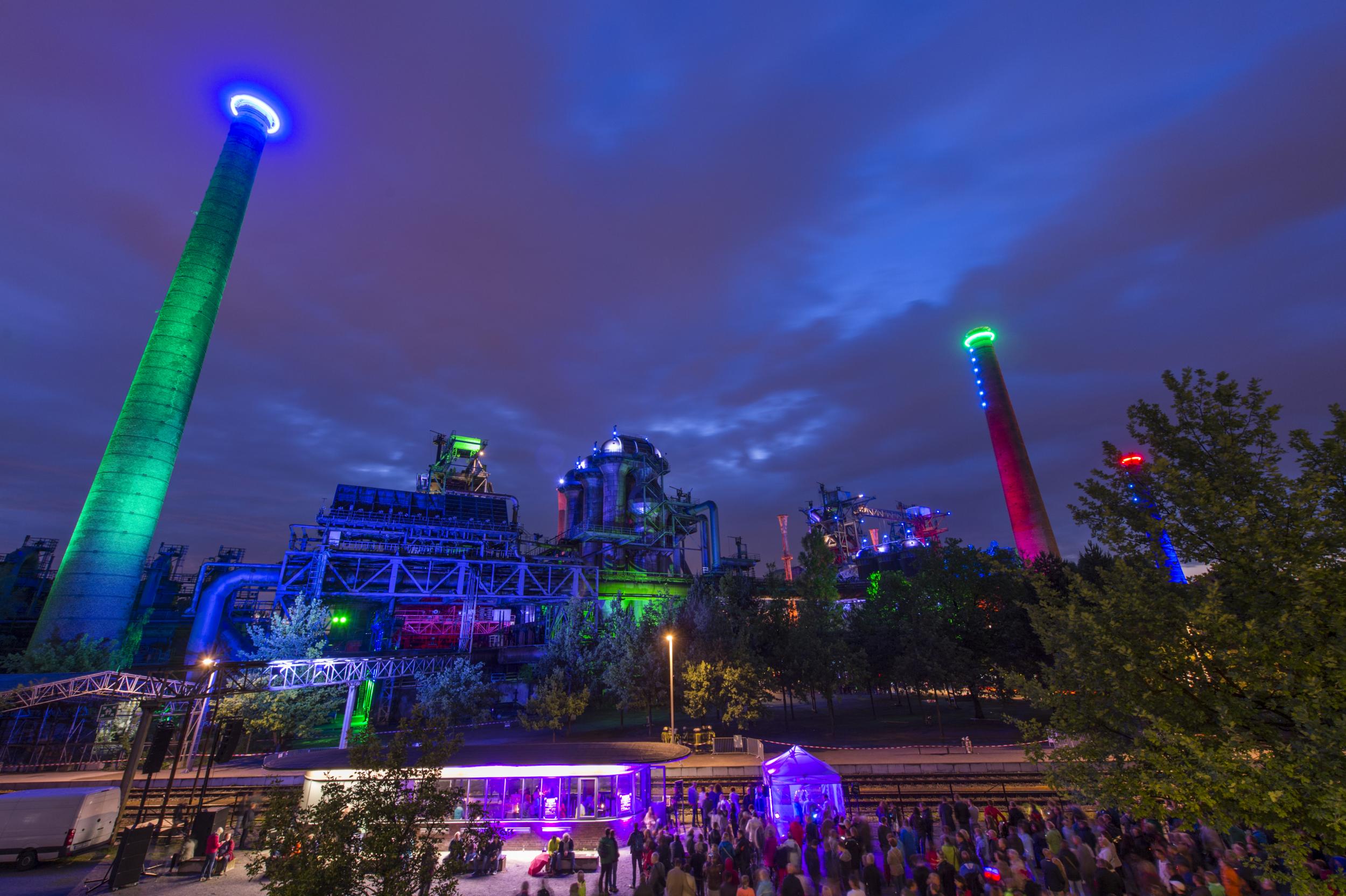 This 570-acre iron and steel smelting plant site founded by August Thyssen in 1901 was transformed into a recreational park in 2002. I explore for hours – climbing up massive blast furnaces and over rusting catwalks, stopping to watch daredevils rappel down the steep walls of ore bunkers. You can even scuba dive in the old gasometer tank, complete with an artificial reef and submerged aeroplane hull. Most surprising in this industrial zone, greenery abounds, with flower-filled gardens and pretty, tree-lined canals. In warm weather, outdoor film screenings and concerts regularly take place across the site.

Munich architect Peter Latz, who designed Landschaftspark over a period of 11 years, tells me: “The fundamental challenge was to environmentally renew a devastated, contaminated area. We tried to retain as much as possible of former production sites and existing infrastructure and to integrate new elements into the structure.”

Similarly, Jahrhunderthalle Bochum, a glass and steel 1902 exhibition pavilion and former gas power station, has been given new life as a concert hall and cultural centre. I take a free guided tour of the lofty, cathedral-like space and learn about its long history, then walk the mile-long circular trail in the adjoining Westpark – a one-time industrial site turned multi-level green space with cycling paths, picnic areas, a playground and once-contaminated pools now alive with fish. 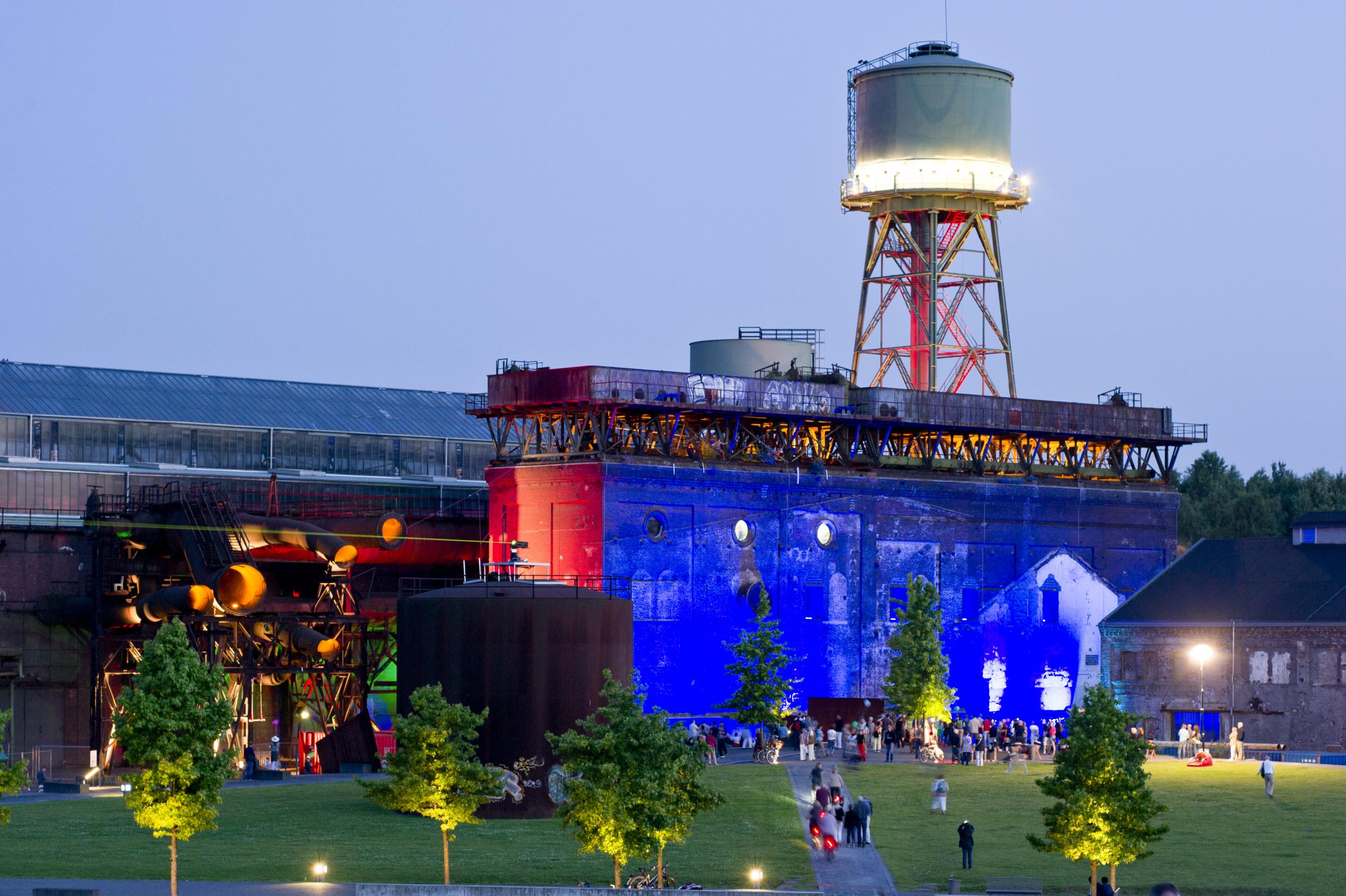 On my last day, it’s a whirlwind of sites along the Industrial Trail, with visits to the gorgeous Art Deco Zeche Zollern colliery outside Dortmund, the crumbling mine Zeche Ewald which now boasts a cool beer garden, and Zeche Nachtigall (or Nightingale), where I join a German-speaking tour (€2) for a peek inside an early 19th century mine.

Along the way, I stop at several slag heaps – giant hills of waste material left over from mining – that have been topped with sculptures.

In Essen, it’s worth the hike up Schurenbachhalde to see Richard Serra’s 50ft slab of rusting steel set in a rocky, lunar-like landscape. Especially Instagram-worthy is Bottrop’s Tetrahedron, a futuristic, nearly 200ft high climbable steel pyramid with three viewing platforms. I left it to the brave souls to mount the narrow looping stairs of Duisburg’s Tiger and Turtle – Magic Mountain, a 70ft high outdoor sculpture of galvanised steel that resembles a roller coaster. 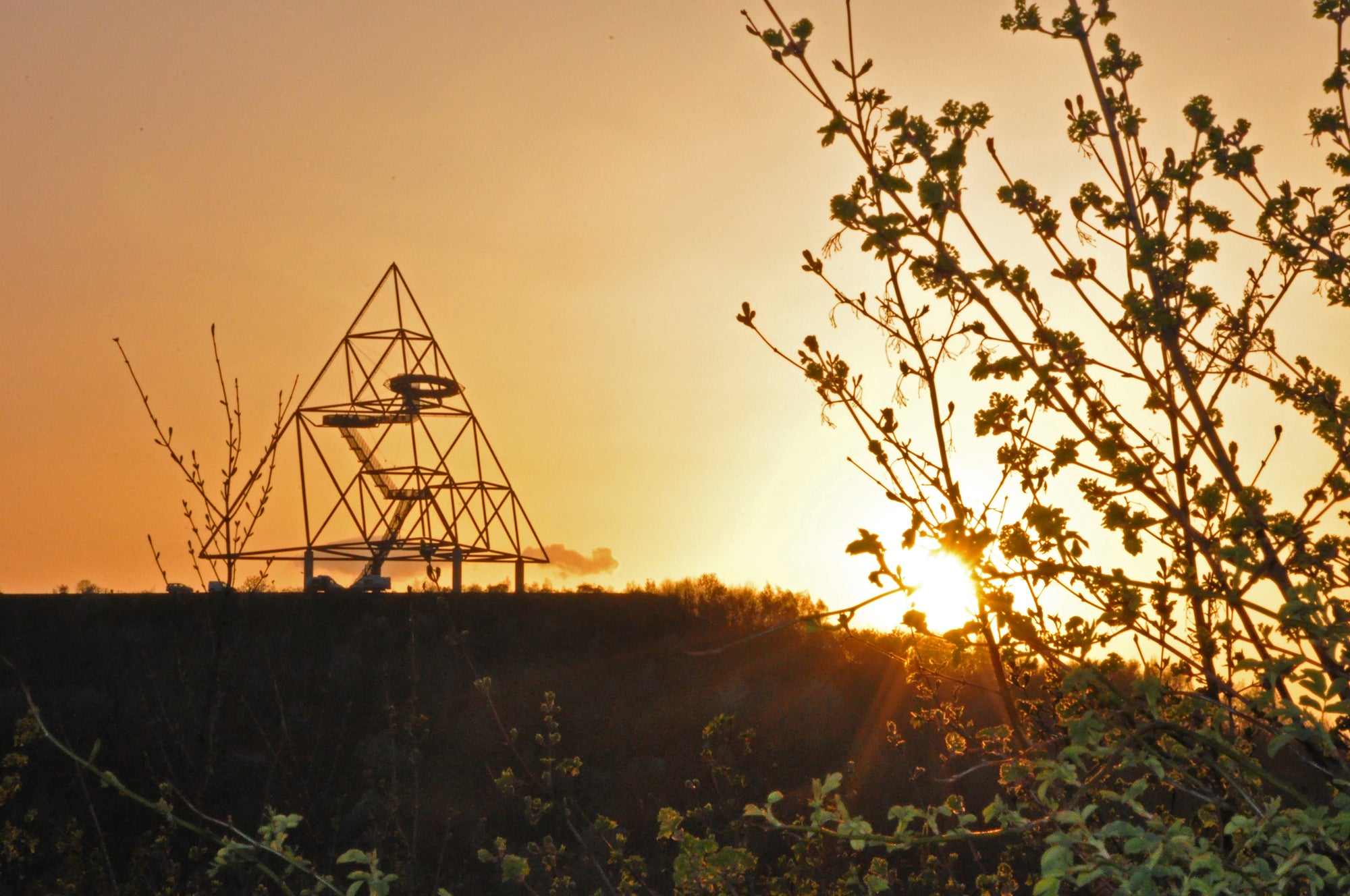 Though I had just three days to explore the entire Industrial Heritage Trail, I could have easily spent a week there, meandering my way along its 25 anchor points, 30-odd industrial panoramic points, worker housing settlements and the villas of tycoons like Krupp.

The writer stayed as a guest of the new 25hours Hotel Das Tour in Düsseldorf. Doubles from £90, room only.

If you want a taste of the trail, ExtraSchicht, Night of Industrial Culture, is an annual event held the last Saturday of June, with live music, performances, fireworks and more at 50 venues in 22 Ruhr region cities. It takes place this year on 30 June.