“Never been to Oxford? Really?”

My well-spoken and nattily dressed tour guide, Terry Brenble, is wide-eyed at my disclosure that this is my first time in her fair city as we amble down the high street. I assure her that, yes, it’s quite true.

“Have you been to Cambridge instead, then? People often pick one over the other.” Um, no. No I have not.

I’ve somehow managed to reach the grand old age of 30 without ever having visited the UK’s two pre-eminent university cities and, rather confusingly, my premier outing in Oxford involves taking a tour that seamlessly blends fact and fiction together.

Oxford isn’t short of literary connections and, subsequently, isn’t short of literary-themed walking tours. But, unlike Tolkien, C S Lewis and the rest, the new tour I’ve embarked upon – entitled Lyra’s Oxford – isn’t so much about author Philip Pullman, creator of the beloved His Dark Materials trilogy, as it is about his most famous characters. It’s being launched to the public on 19 October to coordinate with the publication of La Belle Sauvage, the first book in Pullman’s new Book of Dust trilogy.

Lyra’s Oxford, described in detail in Pullman’s Northern Lights, is similar to our Oxford, but with countless subtle yet important differences: Lyra’s Jordan College is actually Exeter College. Her St Sophia’s College is our Lady Margaret Hall. For someone with no prior knowledge of the city – someone whose main impression of it, in fact, comes directly from Pullman’s imagination – it is hard to keep straight what’s real and what’s made up. 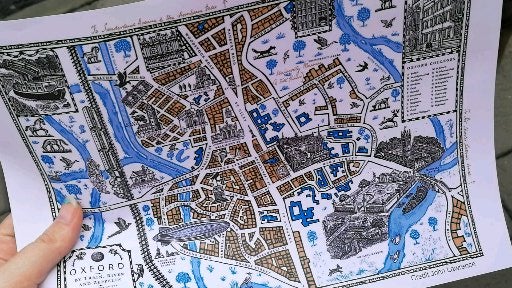 Still, Terry’s knowledge, built upon 30 years of tour-giving, is extensive, and she integrates bona fide information along with pointers as to where different scenes in the books take place. She is also whippet-quick; blink and she’s gone, across the road, round a corner, through a giant wooden doorway and into a college quad.

I always thought my “London walk” (designed to weave around irritatingly slow tourists at lightning speed) was swift, but I soon find myself outpaced as I dawdle to take in Oxford’s unrelenting beauty: its warm golden stone; its swirling spires, and its impossibly grand churches and university buildings.

I always thought people were exaggerating about the place, but (as someone on a previous tour once commented to Terry) “the whole city looks like a film set”. 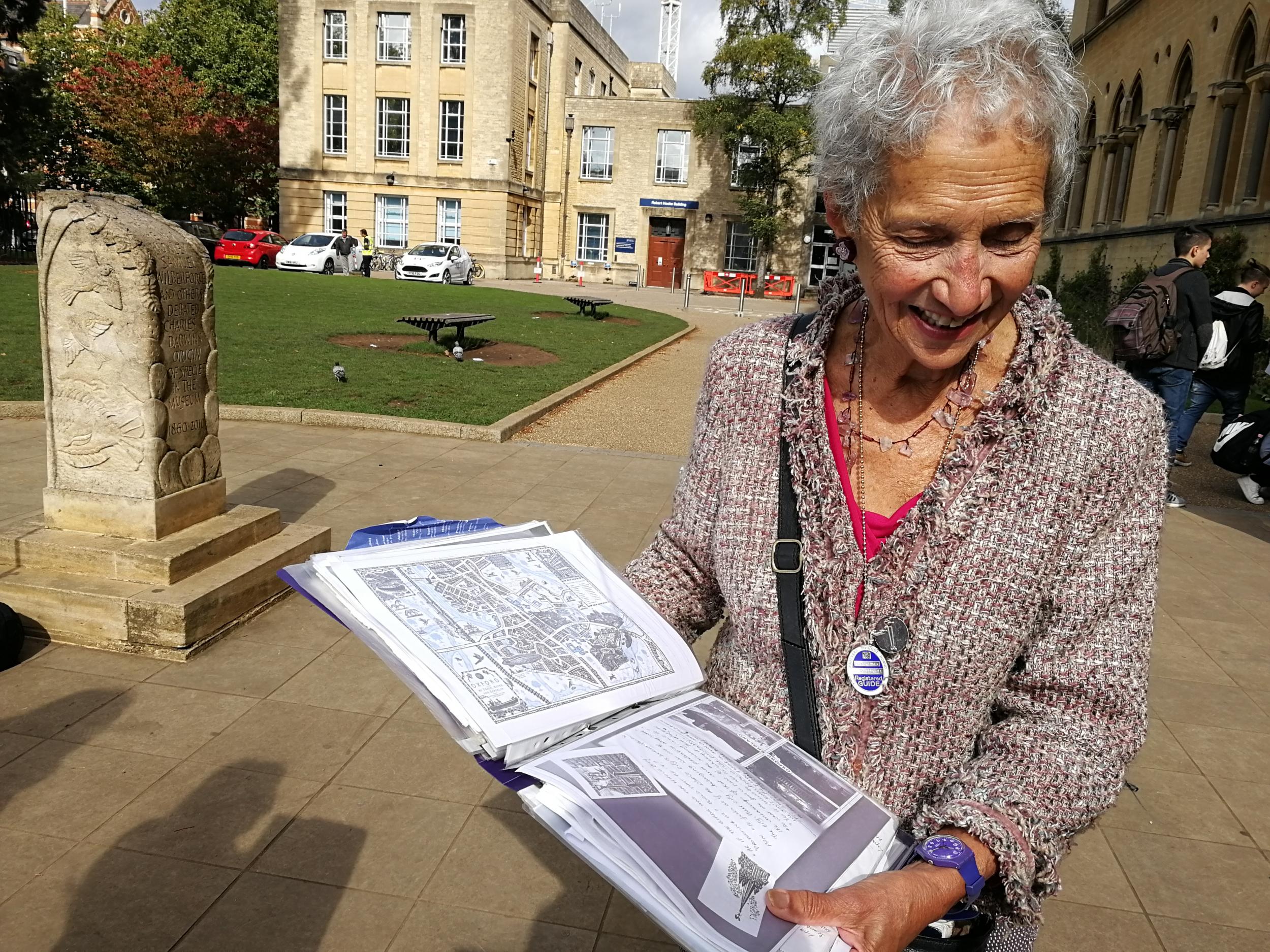 The tour is just two hours long, but Terry’s skilful handling means that landmark after landmark is ticked off and highlighted on a bespoke Lyra’s Oxford map – the covered market, Jordan (Exeter) College, the Bodleian Library, the Pitt Rivers Museum. At this last, I’m thrilled to discover that there really is a display case holding trepanned skulls with holes in them.

I loved this tangible link between the books and reality – Lyra finds this same case in The Subtle Knife and uses her truth-telling device, the alethiometer, to find out how old the skulls are.

But the pièce de resistance comes in the form of a trip to the Botanic Gardens. This is where Will and Lyra have their heart-wrenching parting in The Amber Spyglass; a scene which never fails to set me weeping uncontrollably. Terry leads us through the gardens, rich with bright flowers and verdant plant life, and past a tinkling fountain. We file through a stone arch, along a path and there it is – the famous bench where the  protagonists agree they will come and sit once a year, Will in his Oxford and Lyra in hers, to feel close to one another again.

It is set behind a tree, whose leaves rustle in the breeze as birds sing overhead. The sun breaks through the clouds and Terry reads a passage from the book – the one where Lyra and Will say goodbye for the final time. It is a gorgeous moment. 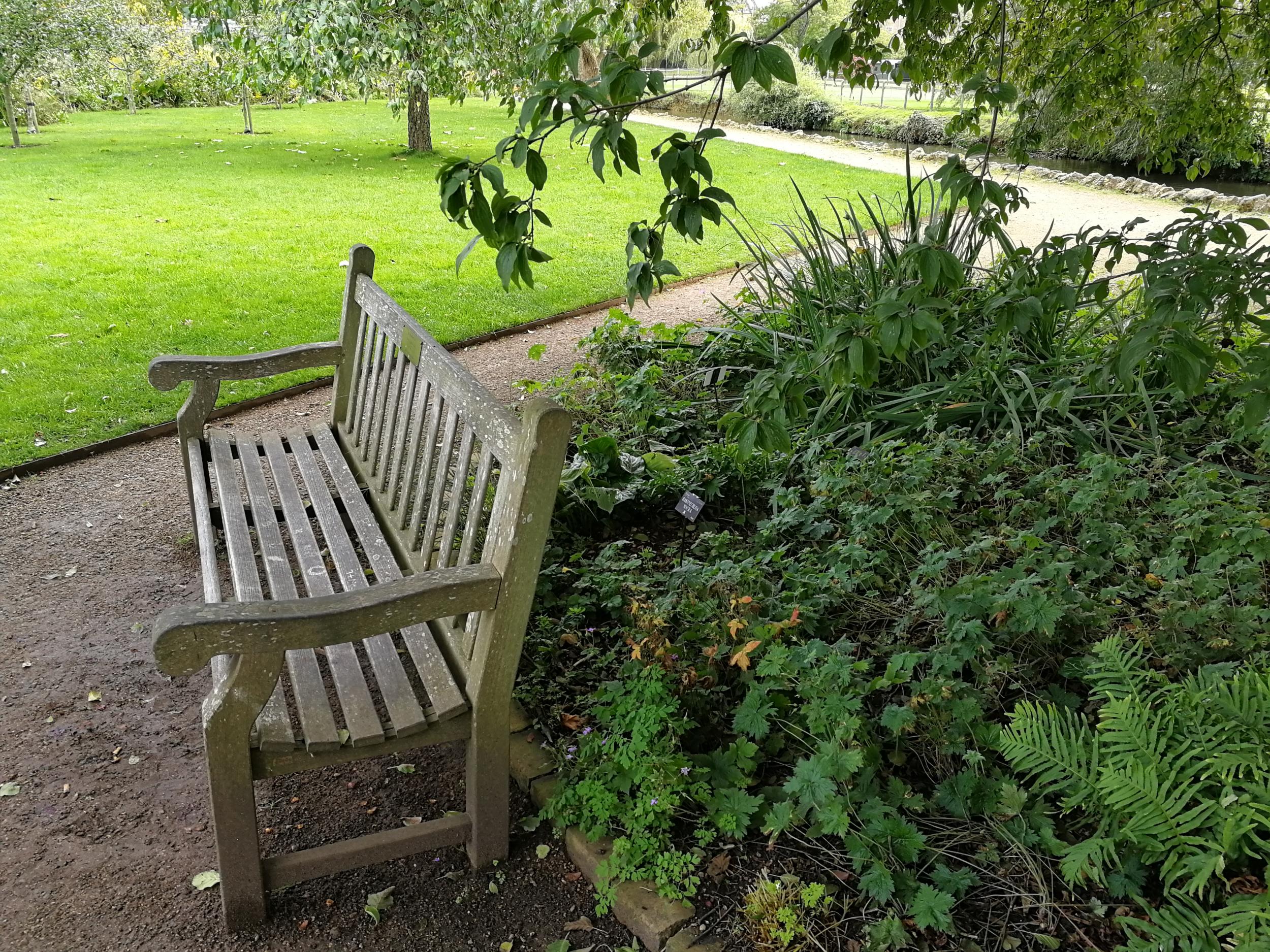 Looking down at the bench, it seems I’m not the only fan; countless others have come here before me and left graffiti on the bench. “Lyra + Will”, “L and W” read the tributes carved into the wooden slats over and over again. It certainly makes a nice change from the usual insults and obscenities.

The tour over, my head is a jumble of names and buildings; Lyra’s Oxford and the real-life version blend and blur, the boundaries of the two worlds overlapping at every turn. But I find I don’t really mind. An avid reader, I’ve always been more at home in the world of fiction anyway – and now, with La Belle Sauvage, I can slip back into Lyra’s realm once more. This has been the perfect warm-up.

Trains run from London Marylebone to Oxford every half an hour, with a journey time of just over an hour. From £12.50 return (chilternrailways.co.uk).

On the High Street, the Old Bank Hotel has comfy double rooms from £230, B&B.