It is an aroma that Napoleon Bonaparte is said to have reminisced about as he lay dying on St Helena – the powerful perfume of the maquis plant that blankets the wild hinterland of Corsica.

What chance do I have? The heady scent that seduced Corsica’s most famous son gets to me as soon as I set off on my first summer morning’s scramble; through the tangled underbrush of shrubs, herbs and wild flowers.

My wife Hennie and I are on a week-long, self-guided walking holiday through the scenic high drama of the island’s wild northwest. We’ve come with travel company Corsican Places, a long-time specialist in villas and beach hotels which has recently twigged that the island’s real allure lies inland. We will stay in village inns and hotels with our luggage helpfully transferred between them. That leaves us only picnics and water bottles to carry in our day packs as we hike from one to another.

Our journey starts with a flight to the toy sized airport at Calvi from where a narrow-gauge railway clatters through plunging ravines to the ancient capital, Corte. Through an open window we goggle at dragon’s back ridges, wedding-veil waterfalls and granite crests. It is the height of summer but still there are piebald patches of snow on the highest flanks.

The first day’s hike zigzags through the maquis up to a dizzying pass where we watch the wings of black kites carving arcs into the sky. We might as well be kites ourselves as our eyes prey on mountains darkly marked by woodland and clouds pulled by warm winds into threads of wool. That night, over supper in the serenity of Calacuccia village, we watch the surrounding mountains fade on their dimmer switch from peach to copper.

Over the coming days our walks will vary from short and sweet to more strenuous and sweet. Think the Alps, without all that skiing infrastructure that blights the summer scene. Think wild. Think rooftop. Think pink-tinged peaks and blue-grey scree, razor-sharp shadows and wildflower meadows. 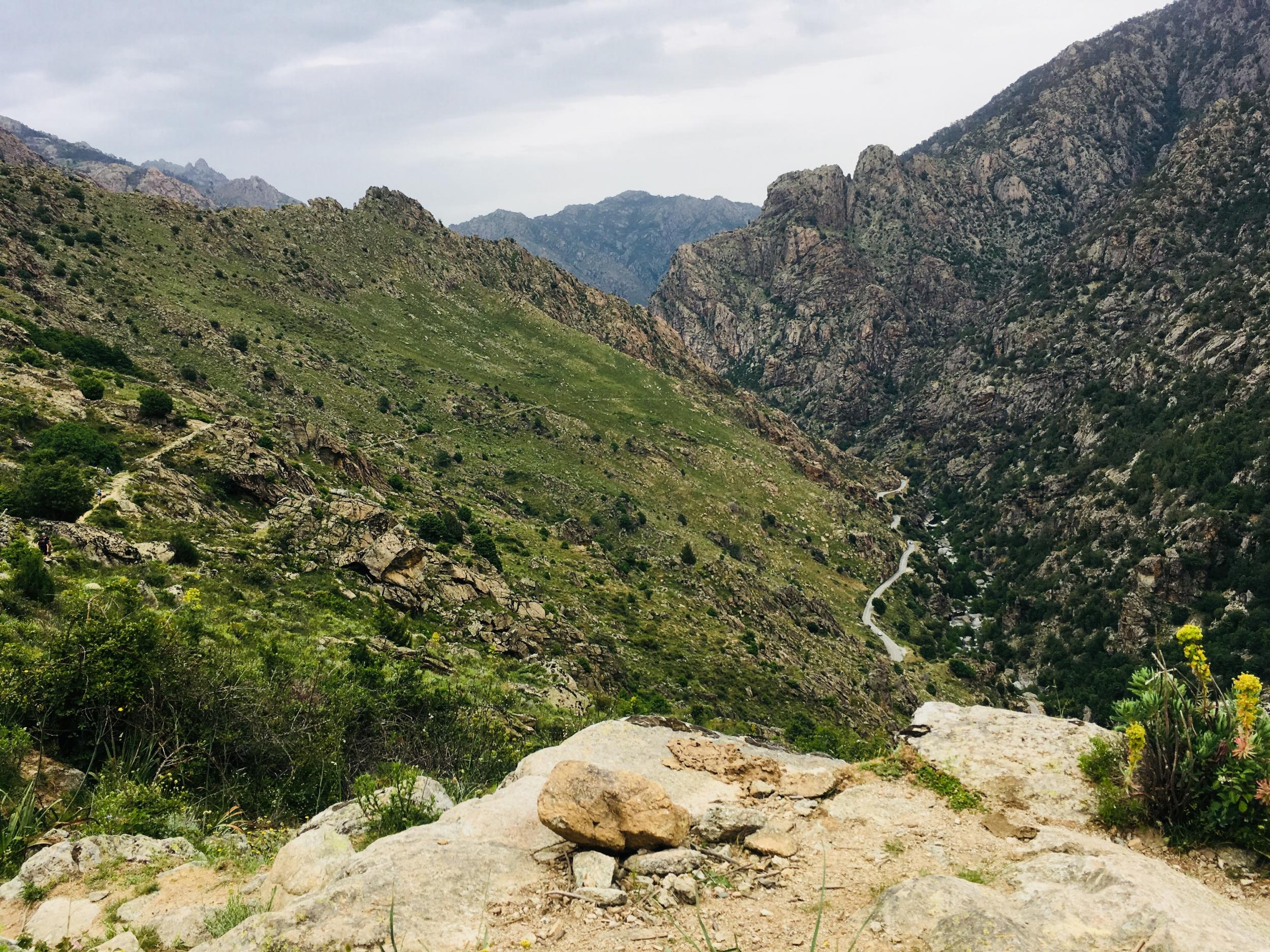 But don’t think “France”. Not really. Many Corsicans are, as one of our hosts put it, “proud, defiant and a people apart from the continental French. We have our own language and culture rooted in the centuries when we were Genoese.”

Nor should you expect French finesse in the cuisine. Corsica, or its mountain heartland at least, seems to have a special talent with in-your-face meat dishes. Figatellu, an offal sausage, is a perennial. So is sanglier (wild boar). Vegetarians are served with an (admittedly Gallic) shrug and an omelette.

Our daily routes stitch together various well-mapped hiking trails punctuated by coloured dashes on rocks and tree trunks. This makes orientation fairly easy. Although recently waymarked, the tracks that some of these follow are much older; one day we find ourselves on an ancient transhumance route – a trail for driving livestock up to summer pastures. 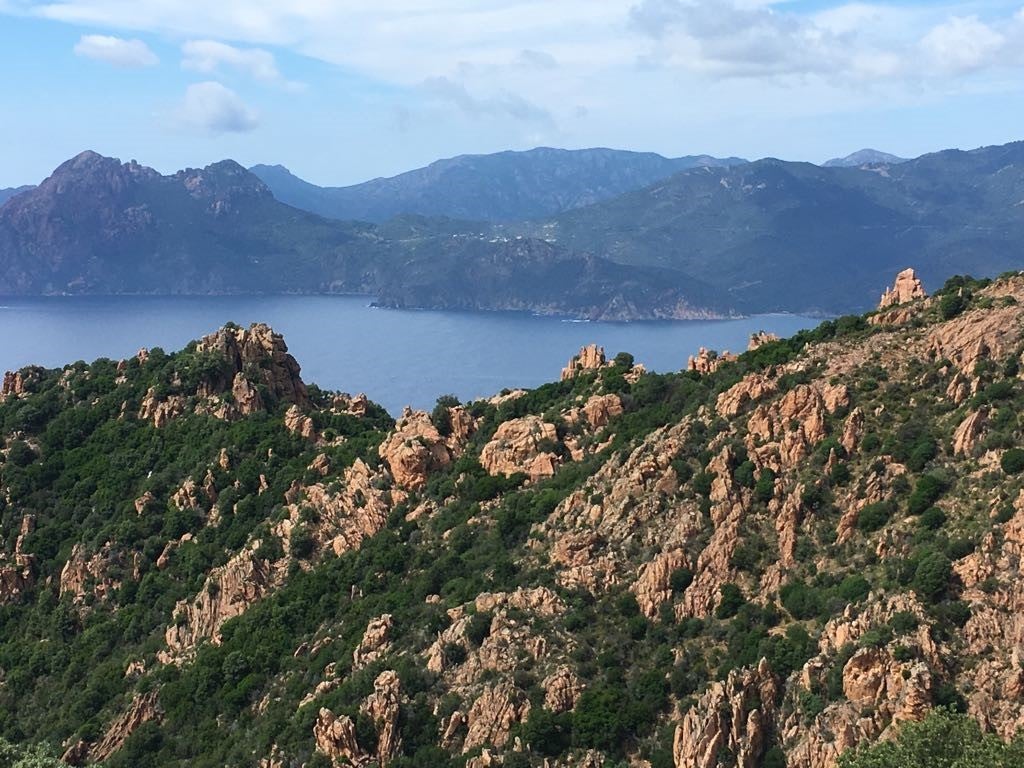 Once or twice we find ourselves dipping (for brief stretches) into some of Corsica’s long-distance footpaths such as the renowned 180km north-to-south GR20. While this route’s scenery is spectacular, we find ourselves marching in a stream of rucksacks-with-legs and so are relieved to navigate back onto minor trails.

Along these lesser paths, the streams are mountain gushes which we have to ford from time to time. In one hot, sun-trapped glade I peel off my T-shirt and jump into a sparkling pool, shouting at the violence of the freezing water.

Later in the week we pick up the Mare e Monti trail: sea and mountains. It is a steady descent through shady chestnut forests, crossing rivers via old pack-mule bridges and following the babble of irrigation culverts. The mountain scenery gives way to glossy citrus groves, trailing vines and silvery olive trees as we drop to the mint-green Mediterranean. 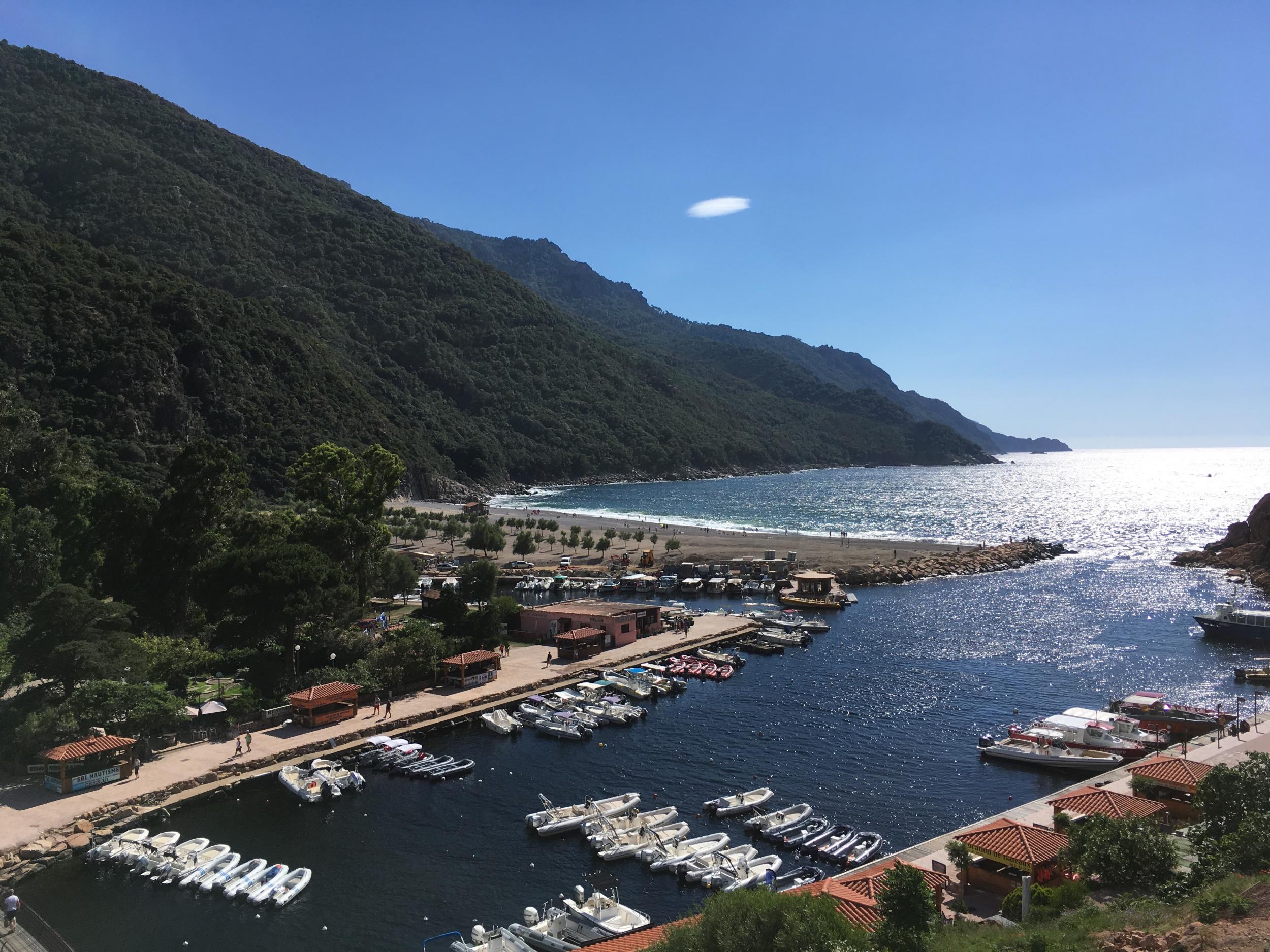 We stay by the harbour in Porto, a small beach resort guarded by a Genoese fort, before a final ramble over to clifftop Piana. This turns out not to be quite the shoreline saunter I was expecting. Instead, the trail swings inland, climbing steeply into a dense Tolkienesque wood, bisected by hissing streams and fluttering with dark-winged moths.

We emerge from the forest having climbed more than 500 metres to one more stupendous surprise. We are high above “Les Calanques de Piana”, an otherworldly splintering of the coast into a jigsaw of copper-coloured headlands and outcrops, weathered over aeons of wind into natural arches and outcrops like cathedral spires or hooked noses.

These rock stars provide our final evening’s entertainment as the sun sets on Piana. We dine on freshly landed sea bream and a soft, ewe’s-milk cheese called brocciu that makes a welcome change from the meaty fare. But, going to sleep that night in the eerily quiet town, my enduring memory of was the perfumed smell of the maquis.

Corsican Places offers seven-night, self-guided walking holidays on the island from £1,049 per person based on two sharing. The price includes flights, B&B accommodation, some dinners, luggage transfers between hotels, maps and route notes.