Cave Hill is an inescapable fact of Belfast life. Practically the only time you can’t see it is when you are standing right on it. It isn’t the highest point in the hills that form the city’s western border – that would be Divis, two hills to the south – but it is easily the most dramatic.

A sculpted ridge of basalt silhouetted against the sky, its resemblance to the face of a sleeping giant supposedly gave Jonathan Swift the idea for his Gulliver (Belfast children learn this fact before their own names).

In older texts, the silhouette is that of the goddess of liberty but some time in the early 19th century it was renamed Napoleon’s Nose, which is what it remains, colloquially, to this day.

There are three main ways to come at it on foot, though one of them (from the car park at Belfast Zoo, off the Antrim Road) has been closed for more than a year following a landslide.

The second – and most popular, especially with visitors to the city – is through the grounds of Belfast Castle, which also offers impressive views across the Lagan Valley and the city itself. Your friendly online map service (well, mine) calculates that the path from the castle to the summit – McArt’s Fort – is 2.1 miles, involves a zigzagging climb of 244 metres and takes you within scrabbling distance of the caves (ancient iron mines is the best guess) from which the name derives. 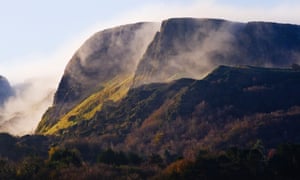 “Moderate to strenuous” is the official Belfast Hills guide’s assessment. “Requiring something firmer than a Chelsea boot” is my own, having several times found myself slipping backwards down the narrow path above the tree line. Where impractical footwear is concerned I’m in good company, though: on Easter Mondays long past, the young people of Belfast would process to Cave Hill in all their finery to roll their eggs and – well – frolic. (And sometimes come to grief, as happened in my novel The Mill for Grinding Old People Young.)

The third approach is the shortest and least steep – a rise of 90-odd metres in just over a mile – beginning on the far side of the summit in the car park of Cave Hill country park on the Upper Hightown Road. (Get there via the Crumlin Road for a crash course in Belfast’s industrial development and – not coincidentally – sectarian geography.) This approach is also the most barren. 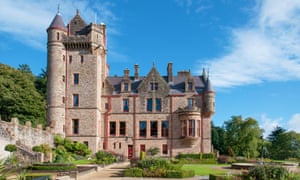 As the path continues towards the summit, the trees – sparse enough near the car park – give out completely. From here on it is gorse and brambles, which of course at this time of year means blackberries. On a September Saturday morning, with few other walkers in sight and mist still hanging close to the ground, the occasional glimpses of the city below are by turns a reassurance and a reminder of Belfast’s origins as a ford for travellers coming over these hills and across the Lagan Valley into the Ards peninsula.

The path eventually narrows as it leads to a black metal gate such as might open on to a meadow, rather than what is essentially a cliff top. (The fencing running off to the left and right of it looks about as substantial as telephone wire.) On the far side of the gate, the path has been stepped for the final couple of dozen metres to the summit. And whichever way you come at it, McArt’s Fort more than repays the effort. 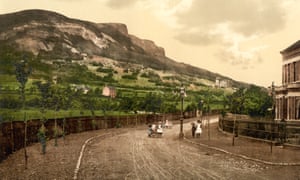 A natural promontory, augmented by a ditch millennia past, makes for a formidable defensive position. It also gives you a view that renders the divisions in the city directly below as inconsequential as they are, from this vantage point, invisible. Gaze up Belfast Lough and out into the North Channel in one direction (the Isle of Man and Scotland are visible in clear weather) and in the other all the way to the Mourne Mountains on the southern edge of County Down.

No wonder the leaders of the United Irish movement chose this spot, in 1795, to swear allegiance to independence in the name of Catholic, Protestant and Dissenter denominations. No wonder that, even today, climbing Cave Hill retains something of the character of a pilgrimage for many Belfast people.

Even if you’re not from here you might be moved to a vow of your own.

I’m not going to say you’ll return to the Hightown Road with a spring in your step but I’d be surprised if you didn’t feel reinvigorated in some way. And though Belfast will sound louder than you left it, there’s just a chance your view of it will have changed for the better.