It’s 11.30am on a sunny Tuesday and I’m in rue Saint-Maur, in Paris’s 11th arrondissement, queuing to collect pre-booked tickets for the noon showing at L’Atelier des Lumières – Paris’s first digital museum of fine art. It’s worth the wait.

The museum is in a former foundry and is operated by Culturespaces, a French museum foundation that specialise in immersive art displays. This is the opening exhibition at what Culturespaces calls its “Workshop of Lights”, and its larger space, La Halle, is dedicated to Gustav Klimt and a century of Viennese painting. There are also works by Egon Schiele and Friedrich Stowasser, better-known as Hundertwasser. A smaller room, Le Studio, is given over to emerging artists – and exploring AI and digital installations.

Using state-of-the-art visuals and audio, artists’ works are transformed as images of their paintings are projected (using 140 laser video projectors) on to (and across) 10-metre-high walls over the vast 3,300 square metre surface area of the renovated 19th-century building. These images provide an immersive and panoramic show throughout the space, to a sound track of music by Wagner, Chopin, Beethoven and others, using an innovative “motion design” sound system, with 50 speakers programmed to complement the 3D visual experience.

It’s difficult not be overawed by the scale and depth of this futuristic exhibition and the multi-sensory experience it provides. It’s also an attempt to make fine art more accessible and to draw in younger audiences. 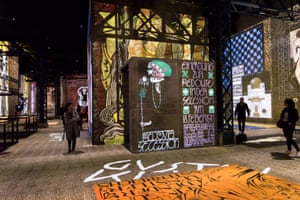 Culturespaces president Bruno Monnier says: “People do not learn about culture as they did in the past. The practices are evolving and cultural offering must be in step with them. The marriage of art and digital technology is, in my opinion, the future of the dissemination of art among future generations.”

We enter through a concrete slab in a wall and walk into the foundry, with its tall drying towers, bare walls and illuminated water tank: an ideal canvas for what turns out to be a mesmerising digital display. We stand in the darkness, confused locals mingling with tourists, the pillars towering above us. Then as the overture from Wagner’s Tannhäuser blasts around the room, thousands of images are set in motion. We’re transfixed as 360-degree views of artworks flash around the room. Alive with sound and colour, paintings slowly come into focus, characters come out of their frames and artworks come to life – on the walls, on the cylindrical pillars, on the ceiling and even on the floor beneath our feet. 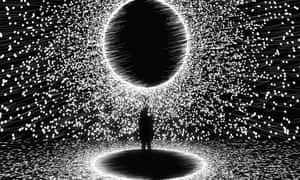 Over the next 30 minutes, we’re taken on a six-part journey, beginning in neoclassical Vienna, showing Klimt’s works in his home city, on columns at Kunsthistorisches Museum, followed by original posters from the Vienna Secession art movement. The vivid colours of Hundertwasser’s paintings float around the floor, and later become a field of flowers as we move through the nature sequence.

Perhaps the most exciting part is the attention to detail – digitally – of Klimt’s characteristic “golden” phase. Rather than jostling for a spot near a framed painting, I find myself wanting to reach into the space in front of me and touch the gold leaf and decorative motifs of The Kiss and The Tree of Life as they are digitally cast around the venue and set in motion to a Viennese waltz. At the end, gold is replaced with bright colours as we gaze at Klimt’s exotic portraits of women and girls – of all shapes, ages and sizes – elaborate yet elegant and so very beautiful, representing femininity in all its forms. 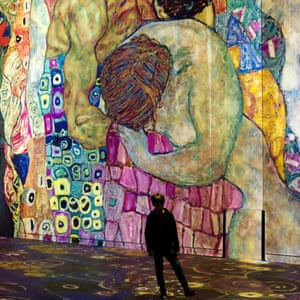 The appetite is clearly growing for immersive art exhibitions: since it opened three months ago, more than 400,000 people have visited Atelier des Lumières. According to Monnier this has exceeded Culturespaces expectations: “We are already thinking about another site in France. At the end of this year, we will open a similar digital art centre in South Korea; it will be in a former bunker on the Pacific island of Jeju. We will open our first site in the US in 2019. Our know-how with this technique is unique and sought-after around the world now.”

It’s the coolest art exhibition I’ve seen in some time, a real addition to Paris’s buzzing 11th arrondissement. Do try and visit.