When a friend and I set out to tackle West Sweden’s Dalsland Pilgrim Trail, we expected we’d have a pleasant enough time of it. We’d be wandering through vast forests, swimming in (and drinking from) lakes and cooking over a fire at night. Neither of us had entertained the thought that the most striking memories would involve a moose on a mission, a five-storey flour-sack chute and an incident with a Canadian canoe that would make me the poster boy for hubris.

The trail follows the route taken by medieval pilgrims from Västergötland in west Sweden to Nidaros (now Trondheim) in Norway, site of the tomb of St Olaf. The faithful trudged this way for 500 years, until 1527 and the start of the Swedish reformation, when King Gustav I declared the pilgrimage illegal. There’s now a plan toreopen the whole route, although so far only a southern stretch – Vänersborg to Edsleskog – is fully waymarked.

The first part of this is along roads, so we joined it at the small town of Mellerud. For the next 56km the trail follows footpaths, forest tracks and, on occasion, orange blobs daubed on tree trunks. 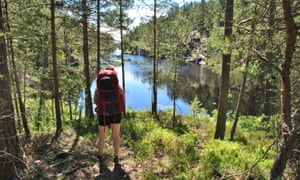 We’d come overland from the UK, taking the train from London to Mellerud through northern Europe. Thus we were already firmly in pilgrim mode when we read on our first trail information board that our medieval predecessors were occasionally picked off by wild beasts. Imagine our excitement when,a few hours in, a moose came charging straight at us … Actually, it staggered comically on spindly legs (it was an infant, thankfully) and at about 15 metres away it stopped, stared at us in bemused incomprehension, then turned and lurched off.

Our opening day of gentle farmland and woods ended in the small village of Upperud. Here, beside a lake, stands the imposing Upperud 9:9, a 100-year-old grain silo converted into a hotel. Opened last year, it has five immaculate little flats, each created out of an individual grain store. Charlie, son-in-law of the owner Kerstin and the architect of the conversion, took us up to the top floor to show us the silo’s workings.

“And that,” he said, pointing to a hole in the floor, “is the sack chute, for sacks of flour . You can go down it if you like.” 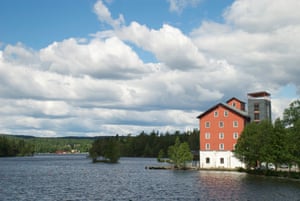 Which is how we found ourselves on a steep, thrillingly narrow helter-skelter, hurtling down five storeys to pop out in the ground-floor cafe, dizzy but strangely elated. Ineed one for my flat.

Next day, after a trawl around Dalslands Konstmuseum, Upperud’s public art gallery – a lot of blood and guts – we set off for the three-night wilderness section of our trek, our food supplies augmented by Kerstin’s energy bars and containers full of silosallad, her own concoction of grains, harissa, grilled veg and salad.

In medieval times,pilgrims could stay for free in specially built shelters. On the trail north from Upperud, this tradition has been rekindled. Half-a-dozen rustic wooden constructions dot the route, three of which are brand-new pyramid-shaped affairs with braziers inside. Each sleeps half a dozen, but as we only once saw any fellow walkers – naturally, they passed as I was engaging in a sneaky skinny dip – we had them to ourselves. 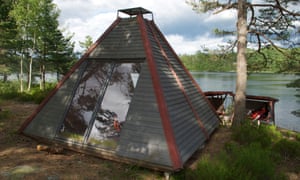 The trail proved bumpy rather than hilly,through forests and up rocky ridges, where butterflies distracted us from views of myriad lakes amid an ocean of trees. We eventually reached Högelund, where there’s not only a new pyramid shelter but a shiny compost loo. Having been caught in a heavy shower, we dried our footwear by a toasty fire and downed a medicinal shot of rum.

The next couple of days were spent in blissful sunny solitude. Never before had we seen so many lupins – at times it felt like the whole countryside was dressed in their purples, pinks and whites. This being Sweden in summer, the days were long, so we had plenty of time to get to a shelter before nightfall. When we reached the one at Tansjön, we sat alone by the lake as it turned a glorious salmon pink at twilight, while deer sounded their cough-like bark somewhere off in the forest. 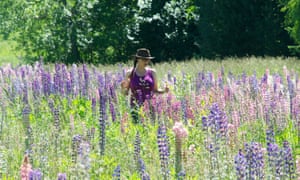 We returned to civilisation with the village of Edsleskog and its wärdshus (guesthouse), run by Hanneke and Johan Postma. They are Dutch exiles who moved here with their children after years of holidaying in the area; the guesthouse enjoys views over Lake Edslan and a sun-trap terrace on which we ate all our meals.

Johan also has a canoe that guests can borrow. Keen to continue following the old pilgrim trail north, albeit on water, I asked if I could take it out solo, my companion having retired for a post‑prandial nap.

“I’ll be fine alone,” I assured him. “I’m an old hand – I canoed across Scotland in five days, you know.” And off I went. 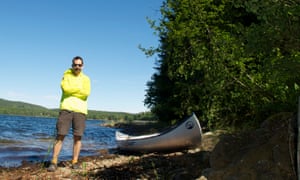 Three hours later, Johan arrived in a car with his teenage son and his teenage son’s teenage girlfriend – neither of whom felt the need to hide their amusement – to rescue the canoe and the idiot Englishman from the lake’s western shore. A strong wind had battered me there and, despite my ever more frantic efforts, the waves insisted on driving me back to the banks.

My mortification was complete when, half an hour after we got back, the lake had become as smooth as a mirror. Being a pilgrim is harder than it looks, you know.