The UK boasts a diverse network of walks that tell our history, form natural borders and nourish our souls. Some have become endurance tests for trophy-hunting hikers, many can be broken down into manageable chunks for recreational ramblers or those of us looking for an excuse for a pub lunch. Whatever your walking mojo, you’ll want to rest and rejuvenate with an overnight stay. Here are 10 popular walks with two boltholes along the way, ranging from hotels to yurts. Use them as starting points for a section of a national trail or to break up a long-distance challenge.

This is a gentle enough trail that starts in historic Winchester in Hampshire and finishes in the seaside resort of Eastbourne in East Sussex, and can be completed in seven to nine days. Highlights include the lovely Weald, cliff-top walks and sea views. The stretch from Ditchling Beacon, the third-highest point on the trail, to Lewes in East Sussex is a winner, as is an overnight stay on the way at the 16th-century Ram Inn, a perfect, picturesque pub at the foot of Firle Beacon. For a bijou B&B, Exton Manor in the eponymous village that sits on the west bank of the River Meon offers two bedrooms in Tariq House, a self-contained cottage in the grounds.
Stay: The Ram Inn Firle, Sussex. Double rooms from £125 per night (raminn.co.uk). Exton Manor House B&B Exton, Hampshire. Double rooms from £125 per night (extonbedandbreakfast.com) 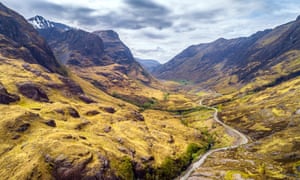 Stretching from Milngavie on the edge of Glasgow up to Fort William in the Highlands, the West Highland Way is pretty challenging. Break it down into seven days and revel in the dramatic landscape. Urbanites wanting a nurtured style aesthetic should head to rural-chic Monachyle Mhor, a boutique lochside hotel in Balquhidder Glen in the Loch Lomond & The Trossachs National Park. “Feature” rooms include twin slipper baths and an Eames chair, and you can stay in a restored 1950s Pilot Panther four-berth showman’s wagon. If you’re heading north, stop off at the traditional Inveroran Hotel in Bridge of Orchy village, a 19th-century drover’s inn right on the West Highland Way.
Stay: Monachyle Mhor Balquhidder, Perthshire. Double rooms from £195 per night (monachylemhor.net). Inveroran Hotel Bridge of Orchy, Argyll. Rooms from £45 per person per night (inveroran.com) 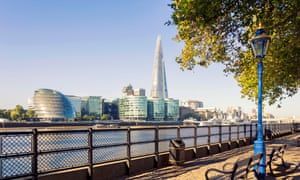 If hills aren’t your thing, follow in Charles Dickens’s footsteps and explore the marshy eastern reaches of the Thames, then head upriver to its source, near Kemble, Gloucestershire. You can walk the whole thing in 12 to 14 days. Overnight in a shepherd’s hut at Manor Farm B&B in the lovely village of Kelmscott, Oxfordshire. William Morris summered in nearby Kelmscott Manor, describing the spot as “heaven on earth”. Closer to the Great Wen, the stylish Bingham Riverhouse in Richmond offers copper bath tubs and views of the river.
Stay: Manor Farm B&B Kelmscott, Oxfordshire. Double rooms from £85 per night (kelmscottbandb.co.uk/bed-and-breakfast). Bingham Riverhouse Richmond, Surrey. Double rooms from £144 per night (binghamriverhouse.com) 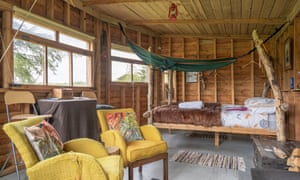 Fear not: the piratical cattle thieves after whom this circular walk is named no longer lurk in the glens and moorlands, leaving the intermediate trail ripe for the hiking. Opportunities to spot wildlife are frequent along the signposted tracks, as are opportunities to hunt down a pub lunch. Find a whisky awaiting you along the way in the airy Kirkmichael Hotel in Kirkmichael or spend the night at hide-cum-glamping hut The Hideaway, just off the Trail’s footpath on family-owned Bamff farm, near Alyth. This off-grid wonder overlooks two beaver ponds and a beaver dam.
Stay: Kirkmichael Hotel Blairgowrie, Perthshire. Double rooms from £85 per night (kirkmichaelhotel.co.uk). The Bamff Hideaway Alyth, Perthshire. From £158 per night (bamff.co.uk)

The Coast to Coast Walk, 182 miles 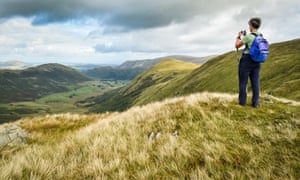 Devised by fell walker Alfred Wainwright, guide and author of what he called his “love letters” to the Lakeland fells, the west to east coast (reversible) route starts at St Bees in Cumbria. It was conceived as a two-week walk, three if you ease your pace, and ends in the old fishing village of Robin Hood’s Bay in North Yorkshire. Hang your boots at the traditional Old Water View Hotel in Patterdale, a village noted by Wainwright for its “magnificence” and by walkers for the well-stocked Village Store. It sits at the southern end of Ullswater in the Lake District and is flanked by Helvellyn. If you make it to the finishing post, rest up at the rather swanky Boggle Hole Youth Hostel, hidden away in a smuggler’s cove.
Stay: The Old Water View Hotel Patterdale, Cumbria. Double rooms from £78 per night (oldwaterview.co.uk). YHA Boggle Hole Robin’s Hood Bay, North Yorks. From £35 per night (yha.org.uk/hostel/yha-boggle-hole) 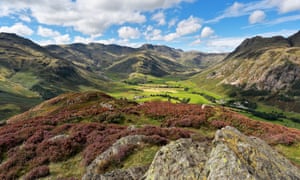 One of the nation’s best-loved walks, the Cumbria Way crosses the Lake District between Ulverston and Carlisle. The scenery is heart-soaring and majestic, and there is a trail for everyone, with Stake Pass the only unavoidable mountain – or rather steep incline, at 480m – to climb. Typically tackled in five stages, from south to north, Langdale in the Central Lakes makes for a wonderful stopover. Pye Howe cottage is a fairytale 17th-century cottage with garden to match. Alternatively, enjoy Armathwaite Hall Hotel and Spa on Bassenthwaite Lake, a stately home in 4,000 acres flanked by the fells and Skiddaw mountain.
Stay: Pye Howe cottage Great Langdale, Cumbria. Sleeps six, from £535 per week (wheelwrights.com). Armathwaite Hall Hotel and Spa Keswick, Cumbria. Double rooms from £125 (armathwaite-hall.com) 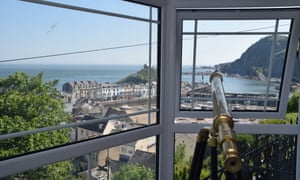 Created by coastguards to spot smugglers, the South West Coast Path is the longest national park in the country. It stretches from Minehead in Somerset across the coast of Exmoor to Penzance before looping east, finishing at Poole Harbour in Dorset. There are more than 400 short walks on the route, so plump for a picturesque base and do day walks from there. One such is the quintessential English seaside resort of Ilfracombe, North Devon, from which you can walk to Woolacombe and Croyde, two jaw-dropping surfers’ beaches. Stay at homely Harbour View, a Victorian terrace property, and enjoy sundowners in its smart first-floor drawing room that offers unbeatable views of Ilfracombe’s natural harbour, quaint quayside and Damien Hirst’s huge sculpture, Verity. Or, for a traditional Cornish farmhouse with sea views, rest up at Mowhay, hidden in the hamlet of Gwendra on the Roseland Peninsula.
Stay: Harbour View Ilfracombe, Devon. Sleeps six; three-night stay from £533 (holidaycottages.co.uk). Mowhay Gwendra, Cornwall. Sleeps six; two-night stay from £339 (nationaltrust.org.uk) 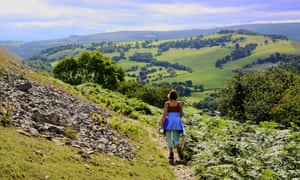 Britain’s longest ancient monument flits across from Wales into England more than 20 times and runs through the Welsh Marches. It takes a hearty 12 days to complete, or five if you’re a fell runner – which you probably aren’t if you choose to break the journey at Pen-y-Dyffryn Country Hotel, a dangerously relaxing Georgian rectory turned peaceful retreat in the Shropshire hills a mile from the Offa’s Dyke trail. Alternatively, keep in touch with nature in the decked-out yurts at Barnutopia in Shropshire.
Stay: Pen-y-Dyffryn Country Hotel Rhydycroesau, Shropshire. Rooms from £288 per night, minimum two nights (peny.co.uk). Barnutopia Llansilin, Powys. Double rooms from £169 for two nights (barnutopia.com) 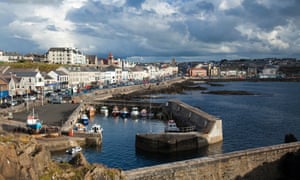 Secluded beaches, high cliffs, medieval castles, a rope bridge and the geological marvel that is the Giant’s Causeway are the draw on this 33-mile hike. Stretching east to west across Northern Ireland’s northerly coast, this two- to three-day walk starts in the Victorian seaside resort of Portstewart and ends in Ballycastle. Spend the night at Strand House B&B, then explore various Game of Thrones locations. Alternatively, try the panoramic Kinbane Self-Catering Cottages perched on a headland and boasting smart interiors and views over Kinbane Castle and across to Islay and Jura.
Stay: Strand House B&B Portstewart, County Antrim. From £125 per night (strandguesthouse.com). Kinbane Cottages Ballycastle, County Antrim. From £80 per night (kinbane.com) 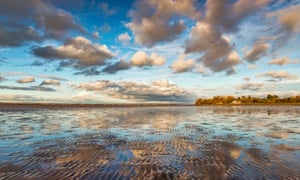 Hadrian’s Wall Path really fires the imagination, offering Roman forts and settlements and staggering landscapes. Choose from family-friendly to fiendishly hard walks on a national trail starting in Wallsend near Newcastle and finishing on the Solway coast in Cumbria. Stay at Housesteads, a restored Victorian farmhouse near Hexham, named after the ruins of nearby Housesteads Roman Fort (highlights include the communal toilets), or the Hill on the Wall, a B&B near Birdoswald Roman Fort in Gilsland, Cumbria. Old-world comforts in suites such as Caligula’s Chamber await.
Stay: Housesteads Hexham, Northumberland. Three-night stay from £379 (nationaltrust.org.uk). Hill on the Wall B&B Gilsland, Cumbria. From £45 per person per night (hillonthewall.co.uk)