Whenever I’m in Glasgow, I usually buy a day ticket for the Subway, the circular underground system that links the north and south city. Affectionately known as the Clockwork Orange, on account of its colour scheme, it’s admirably simple: you can go clockwise or anti-clockwise.

I have found it perfect for music tourism, which is essentially what I do in Glasgow: poking around record shops, hanging around bars and clubs and seeking out locations connected in some way to the Glasgow artists I love. Because for me Glasgow, more than anywhere else in the UK, is a music city.

I recently published Hit Factories, a book about music scenes in our major industrial cities, and in a chapter about Glasgow I take the Subway to Hillhead station. In the ticket hall is a huge mural by novelist and artist Alasdair Grey. It’s a bird’s eye view of the West End of the city, as if the artist was hovering above Byres Road in a hot-air balloon. 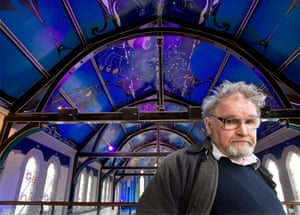 One of the things I thought a lot about while writing the book was the relationship between place and music, and when I got to Hillhead the perspective of the mural reminded me of a song – The Blue Nile’s A Walk Across the Rooftops, from the 1984 album of the same name, which evoked the West End’s sandstone tenement buildings, churches and university.

The Blue Nile was a band rooted in the area: it had once been named McIntyre, after a building on the University of Glasgow’s nearby campus, where its members were once students. They played an early, sparsely attended gig at Di Maggio’s, an Italian restaurant down a laneway off Byres Road. “We played to two people,” singer Paul Buchanan, who still lives in the West End, recalled. “I remember thinking, this is astonishing, the [three-piece] band outnumber the audience.”

(The band’s first two albums were issued by Linn Records, a label run by a high-end audio equipment manufacturer that provides guided tours of its purpose-built factory in Waterfoot, nine miles south of Glasgow. Probably for serious audiophiles only: tours are free on the second Thursday of every month at 10am, book at linn.co.uk) 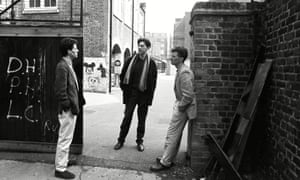 On Byres Road, the Oxfam Music Shop (at number 330) is always worth a look for bargains and rarities, from vinyl and CDs to instruments and hi-fi equipment; and next to Hillhead library is the original Fopp record store, recently saved from closure after an outcry from customers and local musicians.

Further up the street, where Byres Road meets Great Western Road, is the Òran Mór, an arts venue in what was formerly Kelvinside parish church. The ceiling of its auditorium is decorated with an elaborate mural by – who else? – Alasdair Grey, and it hosts live music events several times a week.

The key to Glasgow’s thriving music scene lies in just such small- and medium-sized venues. A mile or so east along Great Western Road (or take the two-stop Subway ride from Hillhead to St Georges Cross) is the Hug and Pint, a bar and venue (named after an album by Scottish indie band Arab Strap, in turn inspired by a former Falkirk bar of the same name) whose kitchen specialises in delicious vegan dishes and whose murky basement room hosts gigs several nights a week.

The Hug and Pint is a relative newcomer, established in 2015, but small venues like it were key to the growth of Glasgow’s indie music scene – places where bands played their first gigs and could meet and share ideas. The 13th Note (originally on Glassford Street, now on King Street), Nice ‘n’ Sleazy on Sauchiehall Street and King Tut’s Wah-Wah Hut on Vincent Street all opened their doors in the 1990s. The latter is famous for being the venue where Creation Records boss Alan McGee discovered Oasis. 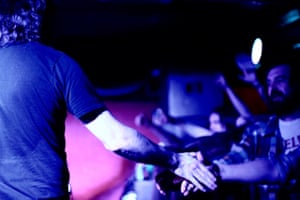 John Williamson, the former manager of Belle and Sebastian and Bis – and now a lecturer in music at the University of Glasgow – was a freelance journalist who ended up working with local entrepreneur and former musician Craig Tannock to open the 13th Note.

“Suddenly there were places that were putting live music on because they really wanted to,” Williamson told me, “not just because it might bring in a few extra punters on a quiet night.” 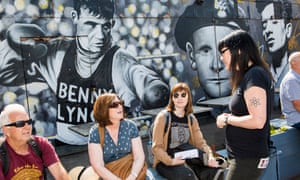 The 13th Note became home to a weekly night, the Kazoo Club, organised by Alex Kapranos of the Yummy Fur, and later of Franz Ferdinand. One of the regular bands was the Delgados, who started a record label, Chemikal Underground, and issued records by many of the bands who gigged there, including Mogwai and Bis. (The story of Chemikal Underground is lovingly documented in Niall McCann’s 2016 film, Lost In France.)

Craig Tannock moved on to open other venues that stick to a similar blueprint: Stereo, the Flying Duck, the 78 and Mono are cafe-bars serving craft beers and vegan food, with a small venue attached. The latter opened in 2002 across King Street from 13th Note, in a sandstone railway arch. Tucked away in a corner of the room, is Monorail Music, a beautifully curated record shop stocking the best independent releases – plenty of them from local acts – run by Stephen McRobbie of Glasgow lo-fi icons the Pastels. 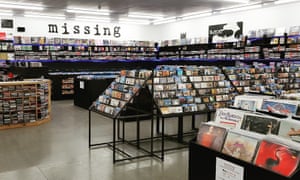 The city has a great selection of record shops: there are gems to be discovered in Missing Records beneath Central Station, a two-level store teeming with secondhand vinyl and CDs; in the West End, the excellent Mixed-Up Records on Otago Street deals in everything from indie to jazz and world music; on the other side of Kelvinbridge is LP Records, which has its own radio station broadcasting from the shop – often the DJs include local indie acts; and Love Music near Queen Street station sells new and secondhand vinyl, CDs and tapes.

It quickly became clear to me that the musical infrastructure of Glasgow – its record shops, bars and cafes, the recording studios and record labels – is the result of a DIY ethos that the city’s musicians had long embraced.

Punk was a galvanising force in many UK cities and has had long-term effects that stretched far beyond the initial sound and fury of the music. The idea of being able to record your own songs, promote your own gigs and issue your own records without waiting around to be discovered by a major label was revelatory. 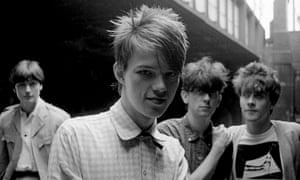 Postcard Records, founded by Alan Horne in 1979, was one of many labels around the country to grasp the potential of this punk-DIY ethos. It’s difficult to imagine the history of Glasgow’s independent music scene without its rickety, melodic and witty guitar pop – typified by Edwyn Collins’ Orange Juice. The band and Horne used to meet in the Victoria Café in the Glasgow School of Art on Scott Street. The Vic, assembled from fittings salvaged from a cafe of the same name on the city’s Southside, is still open despite the damage to the main art school buildings in last summer’s fire.

Postcard’s bands had a musical influence on subsequent Glasgow acts, notably BMX Bandits and Teenage Fanclub. I crossed the Clyde to the Southside to meet Duglas T Stewart of BMX Bandits. He recalled meeting Norman Blake – who later formed Teenage Fanclub – at primary school in the outlying industrial town of Bellshill. They bonded over Orange Juice, albeit as a result of an amiable disagreement: Stewart maintaining that the band’s first single, Falling and Laughing, was superior to their second, Blue Boy, which Blake had just bought. 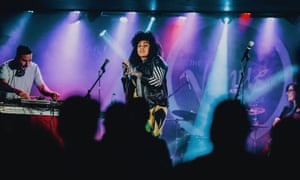 Over time they recruited other young musicians from Bellshill and nearby Motherwell to join their bands, having met them while busking on Saturdays in Glasgow city centre.

When a collective of local music fans started to put on a regular night, Splash One, at a nightclub next to Queen Street station in 1985, Stewart and Blake went along. Instead of DJs spinning vinyl, the music consisted of compilations recorded on C90 cassettes. Live bands would play too, including Sonic Youth.

One of the organisers of Splash One was Bobby Gillespie, later of Primal Scream, whose friend Alan McGee had moved to London and recently founded Creation Records, a label that would be important to the wider success of many Glasgow bands. (Grant McPhee’s charming documentary Teenage Superstars explores this golden era of Glasgow indie.)

I leave Glasgow bearing an armful of records, a list of bands I need to hear more of and a nagging sense that I’ve only scratched the surface of the city’s music scene. But I know I’ll return. Glasgow keeps you coming back for more.

Karl Whitney’s Hit Factories: A Journey Through the Industrial Cities of British Pop is published by Weidenfeld & Nicolson (£20). To order a copy for £17.60 including UK p&p, visit guardianbookshop.com