A Himalayan haven to heal body and soul: Discovering the ancient Indian practice of Ayurveda in Rishikesh

At dusk, a crowd gathers on the shores of the Ganges. Some clap to Hindu music, while others set bamboo cups of marigold flowers drifting downstream.

A monk in yellow robes lifts a bronze lamp, its flame dancing in front of me. He dips his finger in the ash and presses it on my forehead. I take the lamp and raise a fiery toast to the river.

This is Rishikesh, a spiritual city in the foothills of the Indian Himalayas. Every evening, residents gather for this Ganga Aarti ceremony to give thanks to the holy Ganges. 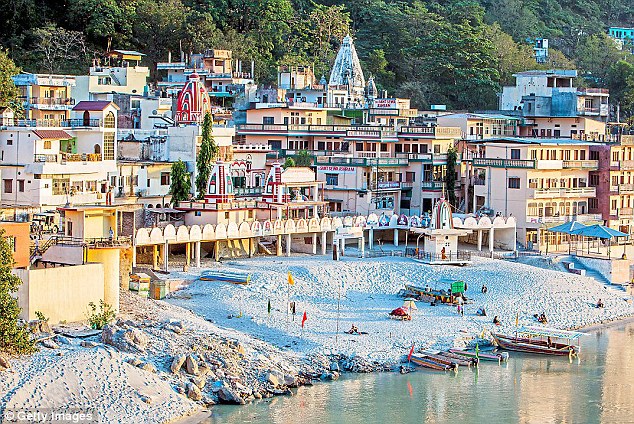 Therapeutic: Yoga town Rishikesh, close to the Ananda spa in the foothills of the Himalayas

Yoga was born here, and The Beatles visited half a century ago to swap drugs for transcendental meditation. It was in these foothills that, 5,000 years ago, a group of rishis (wise old men) gathered to solve the problem of disease.

From their musings came the philosophy Ayurveda, which boils down to this: take care of your body and your mind.

Passing on this knowledge several millennia later is Ananda, a spa above Rishikesh. Housed in the old maharaja’s palace, its grounds are home to royal blue peacocks, brazen monkeys and guests who glide around in their uniform white kurta pyjamas.

Dr Perumbuduri Naresh wastes no time on small talk, launching into my bowel movements, anxiety, drinking habits and how I problem-solve. Afterwards, he announces: ‘You are pitta.’

Pitta is a balance of fire and water. This means I can be intelligent, perceptive and discriminating. That’s fine with me.

I sink into a blissful routine of waking at sunrise for Hatha yoga, moseying between the spa for treatments, the gardens for meditation or pranayama (breathing) sessions, or the pool to drink in the warm sunlight, before drifting off to bed by 9pm.

All treatments are Ayurvedic. Before each, the therapists sing a humbling prayer and wash my feet in warm water and pebbles. 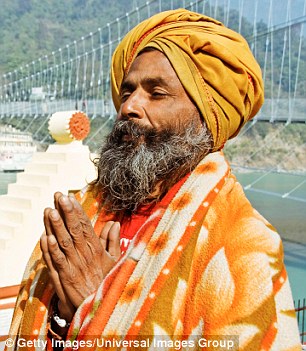 Spiritual: A man prays at the Ganges

During choornaswedana I’m walloped by hot bundles of oil to improve circulation. In tarpana, a remedy for eye strain, chickpea dough goggles are moulded on my face before medicated oil is poured on my eyes. And for nasyam, to cleanse the sinuses, I inhale smoke into my nostrils from a giant pepper cigar.

Abhyanga is my favourite — four hands stroking gloopy sesame oil over my entire body. One morning, I join a trek to Kunjapuri temple. Climbing rubbly paths, we pass through villages stirring in the early morning. The houses are painted in ice cream colours, festooned with threads of tinsel; one woman washes her hair under an outdoor tap, while her elderly mother breakfasts on the front step.

So why come to Ananda? ‘Think of a farmer,’ says my yoga teacher. ‘First, he cultivates the soil. He makes sure the seed is ready to grow. Only then does he plant it.’

Ananda won’t fix you in a week. But it might just sow the seed.