Pick your own pearls! You’re allowed to dive for gems in Bahrain – and it’s richly rewarding

The early morning Bahrain sun has just begun to play on the water as I steel myself to jump off the side of the boat. I’m hoping to emerge from the depths with a bag filled with treasure — oysters containing gleaming white pearls.

The tiny island kingdom’s natural pearls are said to be the purest in the world, their trademark lustre apparently the result of the warm, shallow, highly saline water.

Bahrain was once the centre of the global pearling industry, which was at its height during the 19th century, when pearls were the most valuable gems known to man. Pearl divers would spend months at sea on a traditional dhow boat, from which they were lowered on weighted ropes with nothing but a nose peg to control their breathing. 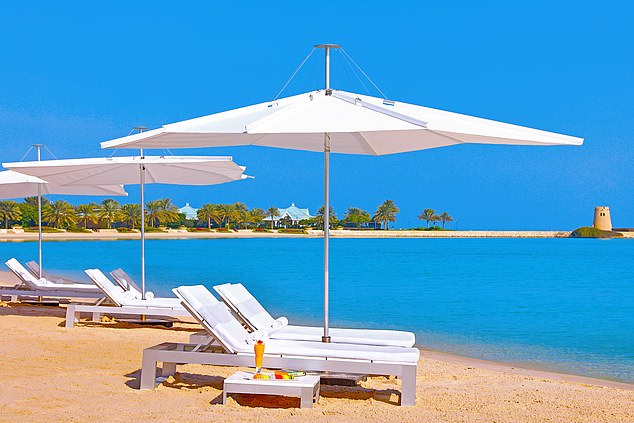 Non-stop sunshine: Bahrain’s pearls are said to be the purest in the world, apparently the result of the warm, shallow, highly saline water

Bahrain’s pearls haven’t been commercially harvested for decades, but the country has opened pearl diving trips to tourists. For £64 per person, as well as £10 for a licensed pass, visitors can gather up to 60 oysters and keep however many gems are found inside.

It’s an effort to raise money to protect the Gulf waters and create a more sustainable pearl diving industry.

Thankfully, weighted ropes and nose pegs aren’t requirements during my trip with diving company Delma Marine. I’m given a mask, snorkel and flippers, as well as a rope bag to put my haul in.

The instructor, Mohamed, tells me to aim for the oysters with the most barnacles on their shells, as this suggests a weakness which may have allowed a foreign body to enter them and create a pearl.

I spend an hour swimming amid the corals and tropical fish, feeling a childlike exhilaration every time I spot an oyster. When I’ve found 18 pleasingly crusty ones, I’m satisfied.

Back on the boat, Mohamed shows me how to prise open their shells with a knife known as a mafligah. Most yield nothing more than a slippery oyster, but the thrill of discovering the luminous objects, like tiny, pure white teeth, make it worthwhile.

My eventual haul is six pearls, so tiny they could never be used for jewellery, and one slightly more impressive specimen. 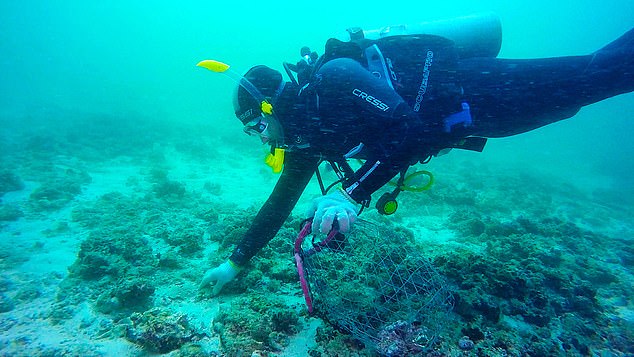 The Kingdom of Bahrain is tucked between Saudi Arabia — to which it is connected by a 15-mile long bridge — and Qatar.

With dwindling oil reserves, much of its vast wealth is from finance and tourism, and, seven years after the political uprisings of the Arab Spring were stamped out by Bahrain’s ruling monarchy, it is working hard to increase the latter.

It markets itself as more liberal than proscriptive Saudi, and less vulgar than overtly ostentatious Dubai. It has a rapidly growing number of upmarket beach hotels accessible via a similarly manageable seven-hour flight.

I stay at the Ritz-Carlton Hotel and Spa, a man-made beach resort set in 20 acres of gardens, which feature flamingos. 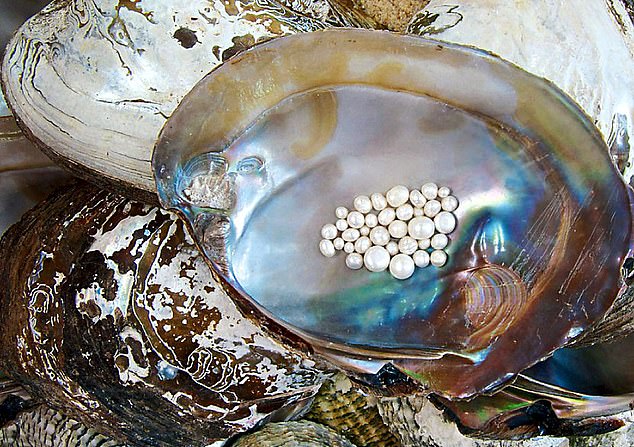 Precious: Visitors can gather up to 60 oysters and keep however many gems are found inside (stock image)

Opulently decorated in an Art Deco style, with plenty of gold and marble flourishes, it offers watersports, an excellent spa and 11 elegant restaurants and bars. One, the Mexican Cantina Kahlo was designed by the artist Sheikh Rashid bin Khalifa al Khalifa, a member of the Bahraini royal family.

He’s there when we go, smoking a cigar with his entourage, and makes a beeline for our all-female group. Our brief conversation must make a favourable impression because when we leave to go to the airport, we find two chauffeured white Rolls-Royces waiting to take us.

On a tour of the capital, Manama, we visit the magnificent Al-Fateh Mosque. Afterwards, we head to Bahrain Fort, a Unesco World Heritage site, where I learn about the ancient Dilmun civilisation. There are claims the site may even have been the biblical Garden of Eden.

I return home with my pearls packed safely away — a reminder of a unique experience in a place which offered much more than I’d expected.