Go wild with huskies and see the Northern Lights: Fulfilling a lifelong dream in snowy Norway

Since childhood, I have had a fascination for borders – the more remote, strange and romantic, the better. And for years, I have wanted to speed across an expanse of snow on a sled drawn by a team of Alaskan huskies.

When work took me far into the Arctic, I discovered a small company, Birk Husky, that runs sledding trips through rivers and forests along the border between Russia and Norway.

On the way, I stopped off in Oslo to catch up with colleague, the Arctic explorer and thriller writer Odd Harald Hauge. 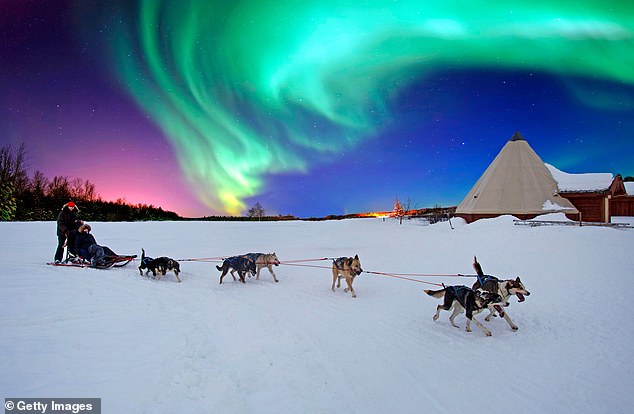 Exhilarating: Sledding in Norway under the Northern Lights

A strapping figure who has climbed Everest and who once owned the most northerly bar in the world, Odd explained how huskies worked together – the lead dogs did the thinking, and the tractor dogs did all the heavy pulling.

‘One other thing,’ he added. ‘Turn the ringtone on your mobile phone to its highest volume. Then, if it falls in the snow, we can find it.’

The closest airport, Kirkenes, would be called a one-horse town in a western movie: a small church, a police station and the Thon Hotel hug a tranquil, white waterfront.

Birk Husky is based an hour’s drive south of Kirkenes, close to the Pasvik River, and it straddles a country road: a guesthouse and offices occupy one side, kennels and equipment are based on the other.

As we arrived, the dogs jumped up on to the roofs of their kennels and howled, knowing that some were about to be chosen for a long sled run.

Kit Hardy, a musher from Framlingham in Suffolk, harnessed one up.

‘Hold him between your legs,’ he instructed. ‘Bring your heels together and you have him secured.’

He twisted a yellow and red harness into a loop and slipped it over the dog’s head and neck.

The dog was called Roald, named after Roald Amundsen, the famous Norwegian explorer who was the first man to reach the South Pole. Roald had thick fur of white, brown and black and was bred from Alaskan husky stock, which can run for hundreds of miles through the frozen wilderness.

Across the road, owner Trine Beddari was organising the day from a small office with huge maps on the wall and a room like a clothing boutique. I dressed in an undervest, boots, a one-piece cold-weather suit and some wolf-skin gloves.

Kit harnessed eight dogs to our long, sleek, birch sled. We stacked a parcel of logs and food on the back and I sat on reindeer skins draped inside. 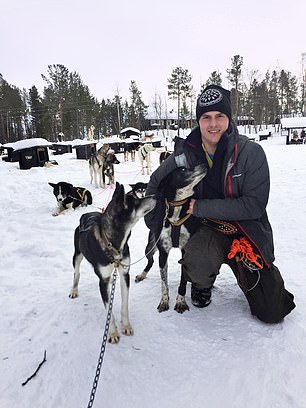 As soon as Kit stepped toward the driver’s perch, Roald strained to go. Another dog yelped and jumped in the air. Kit took his foot off the brake. We sped away, jolting and bumping through a gate and on to a flat, glistening vastness of white. The dogs ran at full pace, at ease with their task. This is what they were born and trained to do.

Soon we were in a rhythm, as the icy breeze licked our face.

We curved toward a copse and dipped sharply down a riverbank, shifting seamlessly from snow-covered land to snow-covered river ice, sledding between trees hanging with icicles and under little wooden bridges.

Kit found a sheltered spot where we dug a small hole and built a log fire to grill fresh salmon and veg for lunch.

Kit is very much an outdoors person, someone who has travelled the world looking for adventurous work. The Arctic and huskies had drawn him here and it was easy to see why.

After lunch it was my turn to drive. There was a hard footbrake for a quick stop and a less powerful one to slow the sled gently. This was used particularly on downhill runs when the sled often ended up going faster than the dogs.

My wolf-skin gloves gripped the handrail and soon I was in the swing of things, shifting my weight from one side to the other as the trail curved back and forth.

We were going at a lick, with a huge sense of openness, freedom and nature, the pine trees of Russia to our right.

Exhilarated, I stupidly I took out my phone to take a selfie, just as Roald saw something on the trail and veered us to the left. My weight was all wrong – the sled tilted and we capsized, falling into a deep, soft drift.

Kit and I roared with laughter while Roald wagged his tail because he had seen it all before. It then took some moments to realise that I didn’t have my phone. There was no sign of it.

But this was Norway. Even in the remotest wilds there’s a good signal, and I had remembered Odd Harald Hauge’s advice.

‘Ring it please,’ I asked Kit. The phone was buried without a trace but then we heard a faint ringtone. I carefully dug down, plucked it out, brushed it dry and it was fine.

That night I dined with half a dozen other sledders at the guesthouse on reindeer steak and wine. Afterwards, we went for a walk to check on the Northern Lights, created when solar winds disturb particles in space.

‘There!’ exclaimed a young woman from Ohio, pointing to the sky.

It began as a glimpse. Then ghost-like streaks filled the night sky, deep green laced with blues, pinks and oranges reflecting in the white snow around us.

Humphrey Hawksley flew with British Airways (ba.com) to Oslo and Norwegian Airlines (norwegian.com) to Kirkenes. A Birk Husky (birkhusky.no) day-trip costs 3,100 kroner (£260). A two-night visit costs 6,800 kroner (£575), which could include a night in a wilderness cabin with log fires. Humphrey was at Birk Husky to research his new thriller, Man On Edge.