Great British Boltholes: New huts at The Fish Hotel in the Cotswolds are so romantic three marriage proposals have already been made there

It’s marvellous to gaze from the terrace of one’s very own spacious, Scandi-chic shepherd’s hut on a hill in the Cotswolds towards one’s very own private island. Eat your heart out, David Cameron, who is believed to have splashed out as much as £25,000 for a shepherd’s hut writing den in his garden not so far from here: this one is better than yours.

The Fish Hotel has just launched five new swanky Hideaway Huts tucked into woodland on the 400-acre Farncombe estate overlooking the Vale of Evesham in Worcestershire.

On my visit I was lucky to stay in the best – nicknamed Boaty McBoatface – with its own boat to row across to a little island with a gazebo. Since it opened a few weeks ago, no fewer than three marriage proposals have been made here, confirming that it’s a winner for a romantic break. 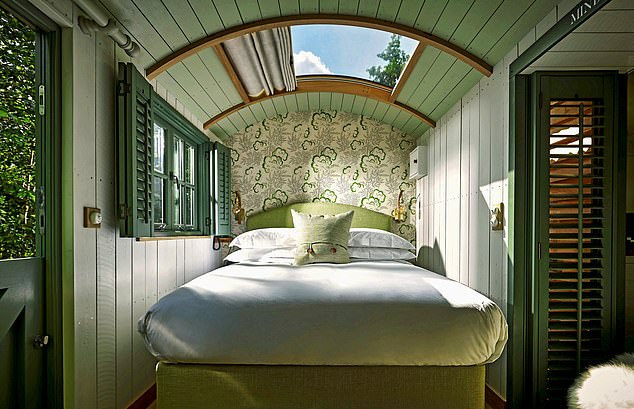 The Danish owners of The Fish Hotel have lavished their romantic accommodation with stylish touches, so it feels like staying in a boutique hotel, with the only difference being that you’re in a shepherd’s hut.

You can curl up with a good book in front of the wood-burning fire and there’s no need for room service as you have an espresso machine at hand. At night, follow the lit path to the bar and restaurant in the main part of the hotel. So you have the pleasure of being in your secret hut, but with the conveniences of a hotel. 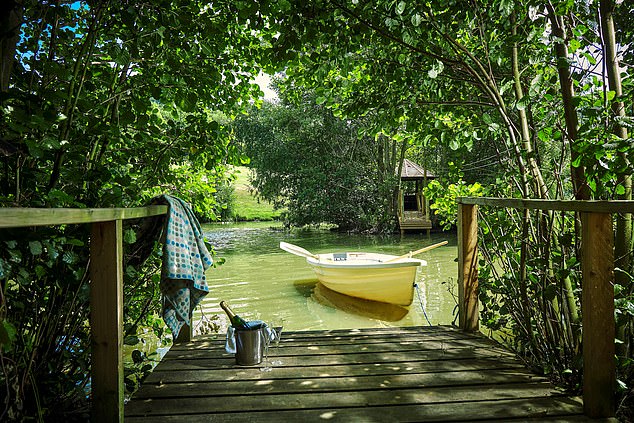 Romantic: One of the huts has its own boat that can be used to row across to a little island with a gazebo

The USP: It’s the Cotswolds but away from the madding crowd. Set just above the picturesque village of Broadway, you’ll find The Fish Hotel on Fish Hill. It’s about a 20-minute walk through fields into the village with its many cafes, antique shops and pubs (The Swan and The Lygon Arms are worth a visit), or walk up the hill to The Fish’s smart sister hotel, Dormy House (dormyhouse.co.uk), for a tipple.

The rooms: The huts are bright and decorated with a comfortable feel inspired by hygge, the Danish concept of cosiness. Despite their diminutive size, they offer standalone baths and showers. If you want to bathe alfresco, each hut has a deck and a Hikki Bohemen outdoor bath for two, heated by a wood stove.

The food: There’s everything a fish-lover could want on the menu at the restaurant, Hook, from oysters, smoked haddock scotch eggs, scallops and whole lemon sole. Don’t miss the bouillabaisse, a delicious medley of plaice, salmon, octopus and mussels. Three courses are from about £33.