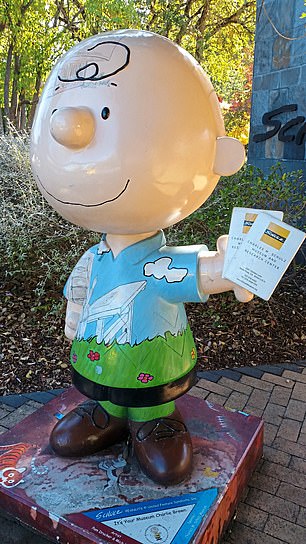 A fibreglass figure of Charlie Brown in Santa Rosa

For fans of Charlie Brown, Snoopy, Lucy and the rest of Peanuts, Sonoma County is like bumping into a first love you’ve never quite got over.

Nowhere is the spirit of the Peanuts gang more alive than in this part of northern California, where cartoonist Charles Schulz created the comic strip from his studio in Santa Rosa.

His legacy is scattered everywhere, from the local airport to the enthralling Schulz Museum, which opened in 2002, two years after he died.

Local artists have even decorated 70 or so large fibreglass figures of Peanuts characters and they are dotted about in parks, shopping malls and hotel receptions.

The Schulz Museum celebrates the artist’s life, and knowing the story of the man enhances understanding of his much-loved characters. As Schulz said once: ‘Everything I am I put into my strip.’ A highlight is the stunning mural of more than 3,500 Peanuts cartoons that occupies an entire wall. Snoopy, we learn, was inspired by Schulz’s childhood dog Spike, a cross between a mongrel and a hunting hound.

Here you can pore over displays of his original sketches and the sheer artistry on display. Take a look at Charlie Brown’s head – it’s one continuous pen-stroke, which may look easy to draw but it’s not.

And a highlight was a true- to-life re-creation of Schulz’s studio, complete with framed family photographs and a wall-mounted pencil-sharpener. 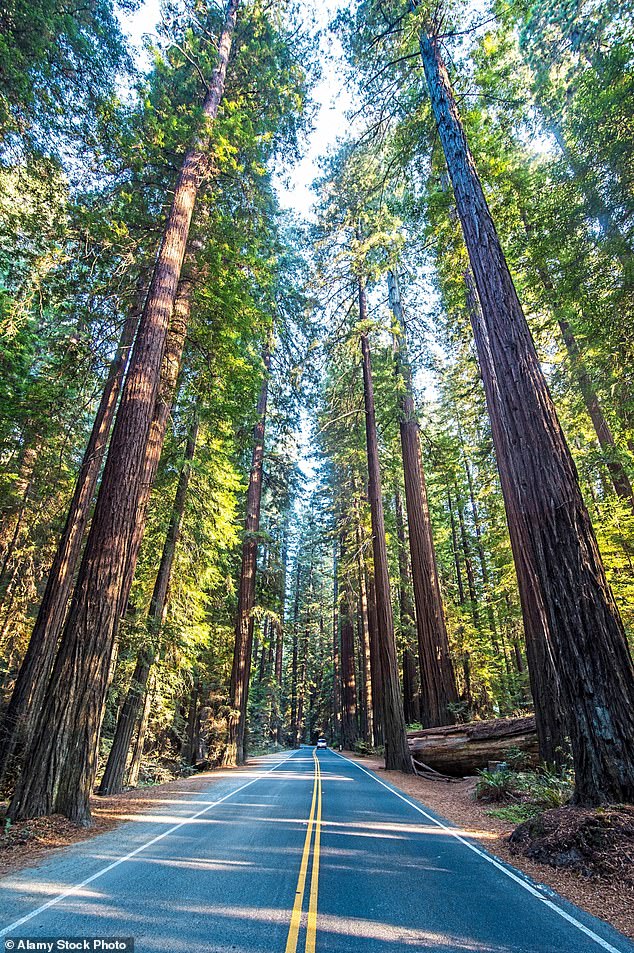 Avenue of the giants: The soaring redwoods of northern California

THE LEGACY OF A GENIUS

Even if you cannot make the trip to California, there is no reason to miss out on Schulz’s genius. An exhibition – Good Grief, Charlie Brown! Celebrating Snoopy And The Enduring Power Of Peanuts – visits Somerset House in London from Thursday until March 3, 2019. The exhibition showcases original cartoons plus work from contemporary artists. For ticket information and opening times, visit somersethouse.org.uk.

In between working his magic in his studio, Schulz spent much of his life at Redwood Empire Ice Arena, meeting friends, ice-hockey players and figure-skaters.

His widow Jean recalls meeting her future husband at the rink in the early 1970s when she brought her daughter to skate. ‘He was drawing images of Snoopy on napkins. I was blown away when I first saw him draw, and how quickly he drew. It was amazing.’

Although Schulz spent much of his life in California, he set Peanuts in Minnesota’s snowy landscape, where he grew up ice-skating. He wanted his Santa Rosa community to enjoy the same, so he funded the rink which was designed by his first wife Joyce in the style of a Swiss chalet.

At the rink’s wonderfully named Warm Puppy Cafe, they serve Beagle Burgers and Peppermint Patty Hot Chocolate, or you can order tuna sandwiches – the lunch that Schulz ate pretty much every day.

Once you’ve sated your appetite for Peanuts, there is plenty to explore in Sonoma County.

We hired a car and headed for the sea, hugging the stunning Highway 1 coast road from Bodega Bay to Timber Cove, north of Jenner. The drive is spectacular, with breathtaking views at every turn.

Perched on a wild clifftop overlooking the craggy Pacific coastline, Timber Cove is a magical 46-room luxury lodge resort that feels as if it is in the middle of nowhere. After sunset, we warmed ourselves around an outdoor fire pit and later tucked into devilled eggs and seared scallops in the cosy Coast Kitchen restaurant. 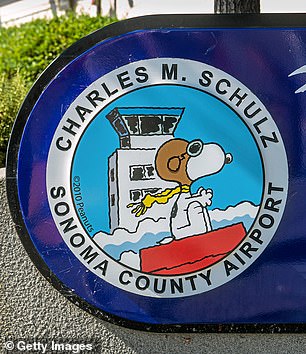 Even the local airport is named after the artist

The next morning, we followed a nearby hiking trail along the coast, heading past weird rock formations sculpted by the sea. Don’t forget your binoculars – we watched seals frolicking in the surf and whales further offshore.

But head away from the coast. Armstrong Redwoods state park, a 40-minute drive from Santa Rosa, is a real treat.

The deafening silence and the towering trees – some up to 1,000 years old – were incredible. It was hard to believe there was hardly anyone else in the 805-acre park.

Sonoma County is also the heart of California’s wine country, so don’t miss out on trying the local specialties. We followed the recommendations of Timber Cove staff to sample the $30 wine-tasting of delicious chardonnay and pinot noir at the Lynmar Estate vineyard near Sebastopol. As glorious late afternoon sun warmed our faces, we saw Mount St Helena and the Mayacamas mountain range on the horizon and raised a glass or two.

Norwegian (norwegian.com/uk) operates flights from Gatwick to Oakland, with fares starting at £175 one-way and £289 return in low fare economy, and £515 one-way and £945 return in premium. Rooms at Timber Cove (timbercoveresort.com) cost from £229 a night. For further information, see sonomacounty.com and schulzmuseum.org.