Sian Lloyd finds that Canada is ‘a more pleasant version of America’… thanks to its beautiful scenery, friendly locals and astonishing range of amazing food (and lack of other tourists)

Canada is so close to the United States, but so far away. It’s like a more orderly, low-profile – dare I say – more pleasant version of America.

This beautiful region has plenty of salty ocean air, forests and flower-strewn meadows, along with warm hospitality. It has all the charms of New England without the queues. 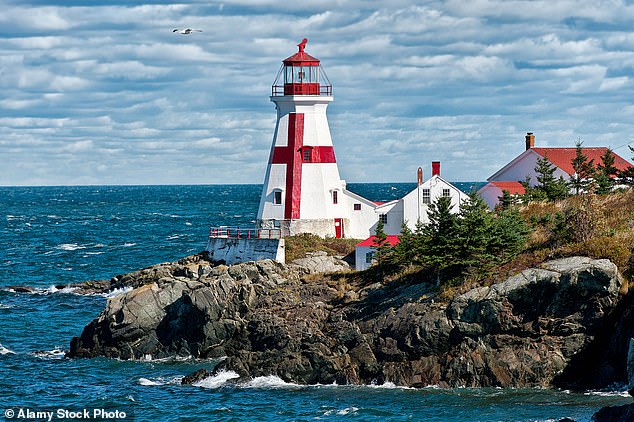 Shining example: East Quoddy Head lighthouse on Campobello Island. It’s famous for being the island summer home to a few generations of Roosevelts

A car is indispensable. I picked up mine at Greater Moncton Airport and drove the 30 minutes to Shediac.

After checking into Maison Tait House, an elegant heritage home hotel, I went to the harbour to meet Ron Cormier, the owner of Shediac Bay Cruises Lobster Tales.

He took us out and taught us how to catch, cook and eat a lobster. The succulent Acadian lobster dinner at the end of the cruise was incredible, juicy and delicious.

The next day, the drive to St John took two hours. This was the only place where we stayed in a modern chain hotel – the Hilton, on the harbour front.

We headed straight for the City Market, for lunch at Billy’s Seafood. My crab cakes, served by the man himself, were outstanding.

I ate lightly at lunch because I’d booked myself in with Uncorked Tours, not just a winery and brewery tour, but a great way of discovering St John. I sipped and nibbled my way through the city, taking in pubs and shops, and learning about the history and culture.

It was also a great way of getting to know the famous St John ‘sloping’ market, the oldest in Canada. The roof is built like an inverted hull of a ship, a tribute to the city’s shipping industry.

That evening I met the producer of the only sustainable wild caviar in the world. Romanian Cornel Ceapa owns Acadian Sturgeon and Caviar, a regulated fishery on the Bay of Fundy. 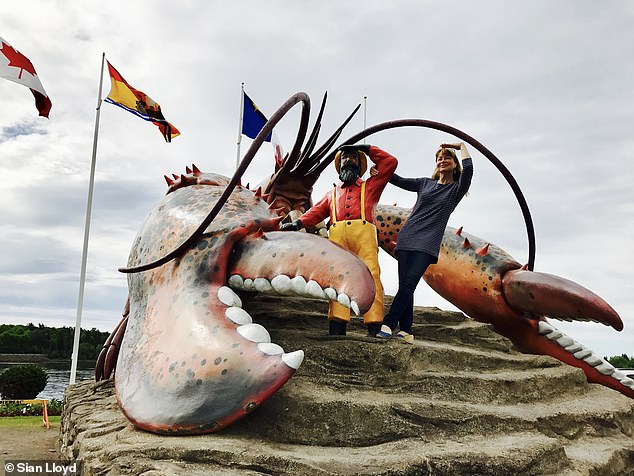 Claws out: Sian poses with a giant lobster sculpture in Shediac. There she learned how to catch, cook and eat lobster

I was lucky enough to be dining at Port City Royal when he turned up with fresh supplies. Mother-of-pearl spoons were supplied, ice-cold vodka poured and I had an hour of getting in touch with my inner tsarina.

Arriving at the Algonquin Resort in maritime St Andrews the next day, I felt as if I was stepping back in time. It’s a refurbished grand old hotel on a hill, with a gorgeous lobby, marvellous martinis, first-rate food and bay views. It has everything, including beautiful ocean-front golf links.

After a quick recce of the charming seaside town a few minutes down the hill, I retired to the Algonquin for a swim and a massage. A bicycle ride with Off-Kilter Tours was booked and – kitted out with sturdy bikes – we were guided along a former oceanside railroad track.

That night we ate at the Rossmount Inn, at the foot of Chamcook Mountain (I climbed it the next day). The fresh seafood, locally foraged fungi and apple beignets were all superb.

I was reluctant to leave pretty St Andrews, but looking forward to staying on Campobello Island a couple of hours away. It’s famous for being the island summer home to a few generations of Roosevelts.

Though the elegant FDR home in the 2,800-acre International Park is the main attraction, there are plenty more on offer, including hiking trails and sightings of red squirrels, snowshoe hares, moose and coyotes.

There was also a lovely Welsh connection to our last few days in New Brunswick. On Campo-bello, I stayed at the Owen House, a colonial inn on a headland overlooking Passamaquoddy Bay.

I checked out early on my last day, after breakfast of blueberry pancakes with maple syrup, determined to make time to stop off at the rural Welsh settlement of Cardigan, on my way to Fredericton International Airport.

I’d arranged to meet Bob Thomas at the Heritage Site Baptist Chapel there. His great-great-grandfather, William Thomas, sailed from Cydweli near Llanelli in 1819 to St John on a ship called the Albion.

Bob took me around the pretty cemetery, where many of the original Welsh settlers are buried. It was poignant to see all those Welsh names – Joneses, Thomases and a Lloyd or two. Bob and I sang a heart-warming hymn together, the tear-jerking Gwahoddiad, by chance a Welsh hymn of North American origin.

He joined me for lunch at the Palate in New Brunswick’s capital, Fredericton, just 20 minutes away. We toasted the Cardigan Welsh Chapel and a smooth flight back home. Iechyd Da New Brunswick, I’ll be back!