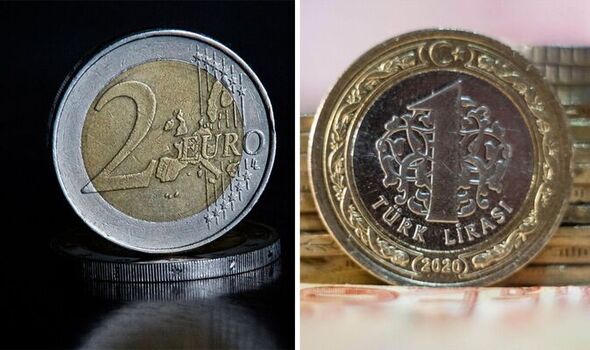 Spain’s Guardia Civil has issued a new warning for tourists and residents over two euro coins. People have been hit by a scam using the coins.

Scammers have reportedly been swapping the two euro coin for a Turkish lira, which looks similar in shape and size.

At first glance, the two coins look very similar as they are around the same size with a gold centre and silver outer ring.

However, there are a few ways to tell them apart to avoid being hit by the scam on holiday in Spain.

The Turkish coin has the face of Turkey’s first president, Mustafa Kemal Ataturk, on the back and a half moon and a star on the front above the value.

A two euro coin clearly states its value on the front and has an image or picture of a Spanish figure on the back.

This isn’t the first time that tourists have been hit with a coin related scam where money is swapped for a foreign currency.

Earlier this year, Spain’s Guardia Civil issued a warning about one-euro coins being swapped with a coin of lesser value.

British tourists are advised to check their change before leaving the business to make sure they haven’t fallen victim to the scam.

Although many tourists now use currency cards while abroad, cash is still one of the most common ways to pay on holiday.

Unfortunately tourists are often the targets of scams as scammers believe they may not be aware of their tricks.

A popular scam in some tourist destinations is to claim that a top attraction is closed and then push the tourist to pay for an expensive tour.

Tourists can avoid this scam by checking information for top tourist attractions online before setting off.

This can also help travellers save money as some attractions offer discounts if people book tickets online.

Some tourists were recently targeted with a ‘bird poo’ scam while they were on holiday in Spain.

Scammers working as a pair will spray the tourist with a liquid and then claim a bird has pooped on them.

While the conman pretends to help the tourist clean up, they will try to steal items from their pockets.

It’s a good idea to purchase a flat money belt which can be easily concealed under clothing while on holiday.

Tourists can also leave any valuables in their hotel room safe to avoid being targeted by pickpockets.

British tourists who think they have been a victim of a scam while on holiday should contact the police.