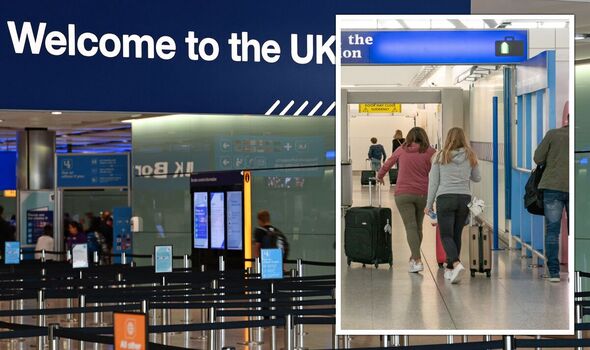 Members of the Public and Commercial Service (PCS) union will take part in the “largest civil service strike for years”. The strike is due to start on February 1 and continue until 7am on February 2.

The PCS union said: “[The strike] signals a significant escalation of industrial action after a month of strikes over pay, pensions, redundancy terms and job security.”

Members of the union previously went on strike at several of the UK’s airports and ports around the Christmas period.

A Government spokesperson warned: “Travellers who are planning to enter the UK on February 1, 2023 may face longer wait times at border control.

“Travellers should check the latest travel advice with operators before travelling. Please be patient and respect officers who are working to keep the UK border safe and secure for all travellers during strike action.”

It said that every passenger who is able to use the e-gates at British airports should do so to ease queues.

Children under the age of 12 are not able to use the e-gates so families will need to queue for an officer.

British tourists have been warned to “prepare for disruption and check before you travel” due to the strikes.

The Government said that military personnel, civil servants and volunteers from across Government are being trained to support the Border Force.

It added: “Border Force are ready to deploy resource to meet critical demand and support the flow of travellers and goods through the border, however those entering the UK should be prepared for potential disruption.”

Border Force previously walked out before and after Christmas with major airports such as Heathrow, Gatwick and Manchester affected.

The majority of travellers didn’t face much disruption at the border as they were able to use the e-gates.

However, according to reports some criminal gangs have exploited the strikes to sneak people into the UK.

PCS General Secretary Mark Serowtka said: “Our hardworking members are fed up and angry with the way they’re being treated by a Government that takes them for granted.

“Since our programme of sustained action started, thousands of new members have joined PCS, determined to win this dispute and secure for themselves a pay rise to help them through the cost of living crisis and beyond.

“The Government can resolve this dispute tomorrow if it puts money on the table. Until it does, the action will escalate.”

Tourists travelling on February 1 and 2 should be prepared to face disruption when they return to the UK.

Who can use e-gates?