You’ve been saying your holiday destinations all wrong! The hardest tourist spots to pronounce revealed – and the toughest are Slovenia’s Ptuj and Eyjafjallajökull in Iceland

The city of Ptuj has been revealed as the world’s hardest city for British holidaymakers to pronounce.

In a survey that looked at the toughest-to-pronounce tourist destinations on the planet, the picturesque Slovenian city, pronounced P-too-ee, was mispronounced by 92 per cent of those polled.

The landmark that stumped the most people, meanwhile, was the Icelandic volcano Eyjafjallajökull (Eyy-afya-la-yoo-kull) – which 98 per cent failed to pronounce correctly. 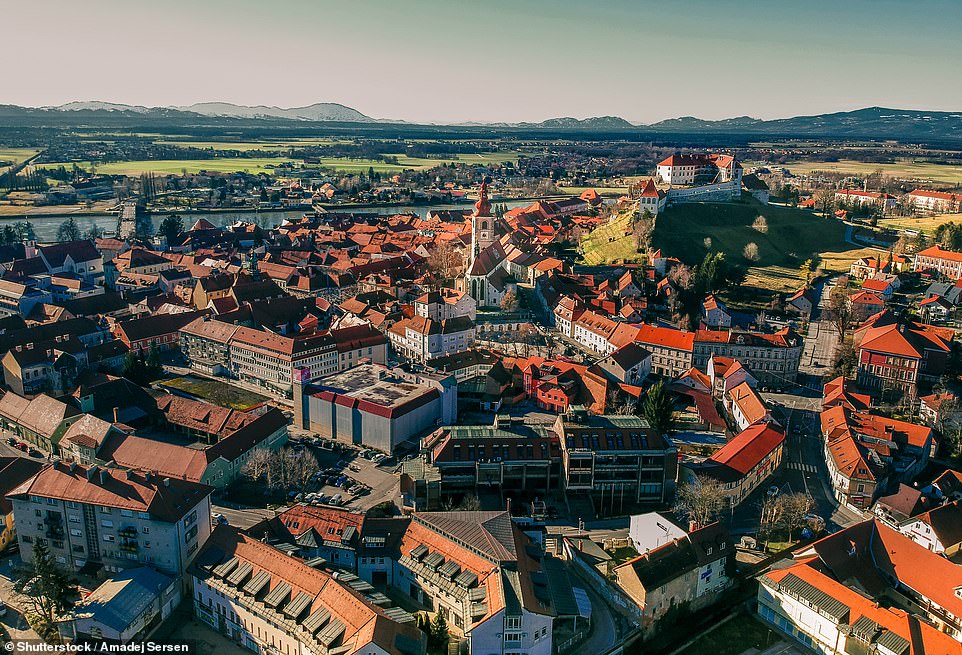 You say Put-ooj, I say P-too-ee: The city of Ptuj has been revealed as the world’s hardest city for British holidaymakers to pronounce 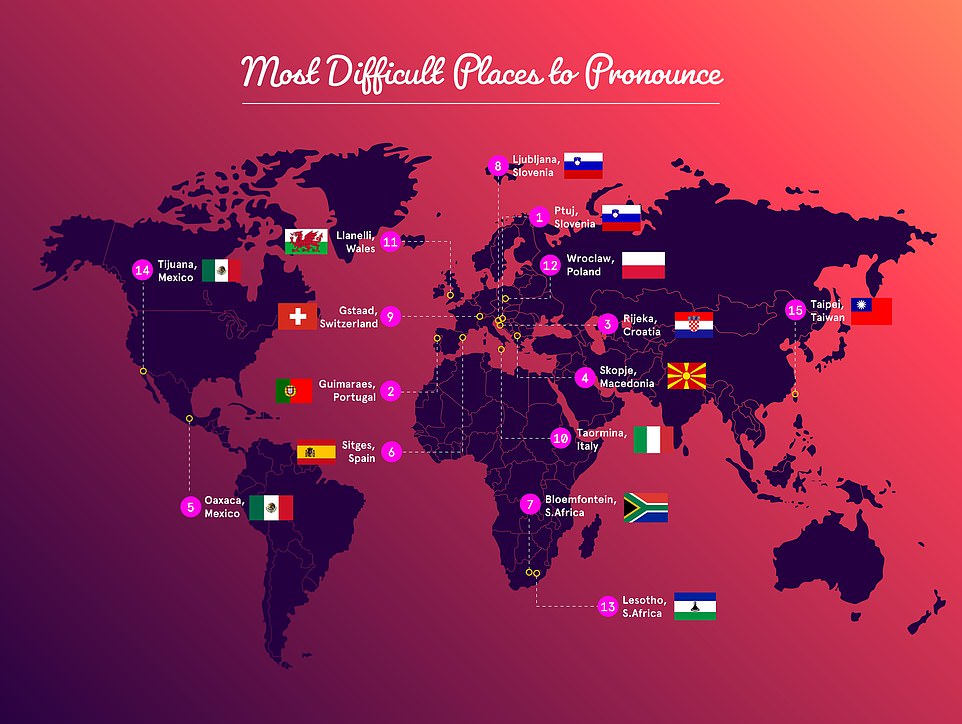 This map shows the full top 15 hardest-to-say cities, which has entries from Mexico to South Africa via Wales

The study, by the Bolsover Cruise Club, polled 2,000 people, and they were also asked about food and phrases that they struggled to pronounce. 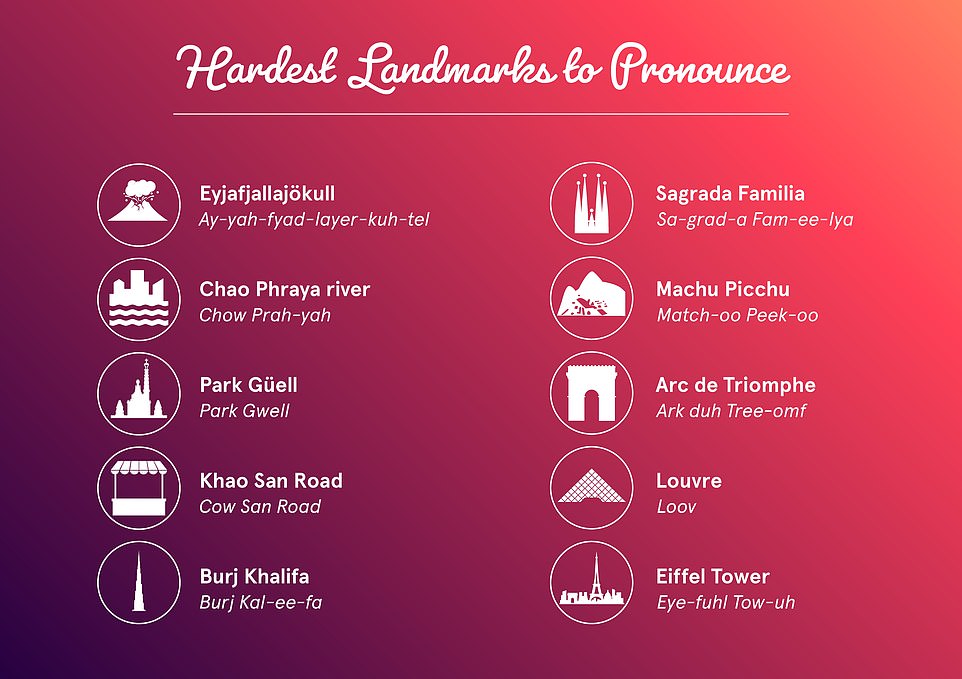 The landmarks that those surveyed found hardest to pronounce, with the No1 perhaps coming as no surprise

A selection of difficult-to-say places, what the mispronunciation often is – and how to say it revealed 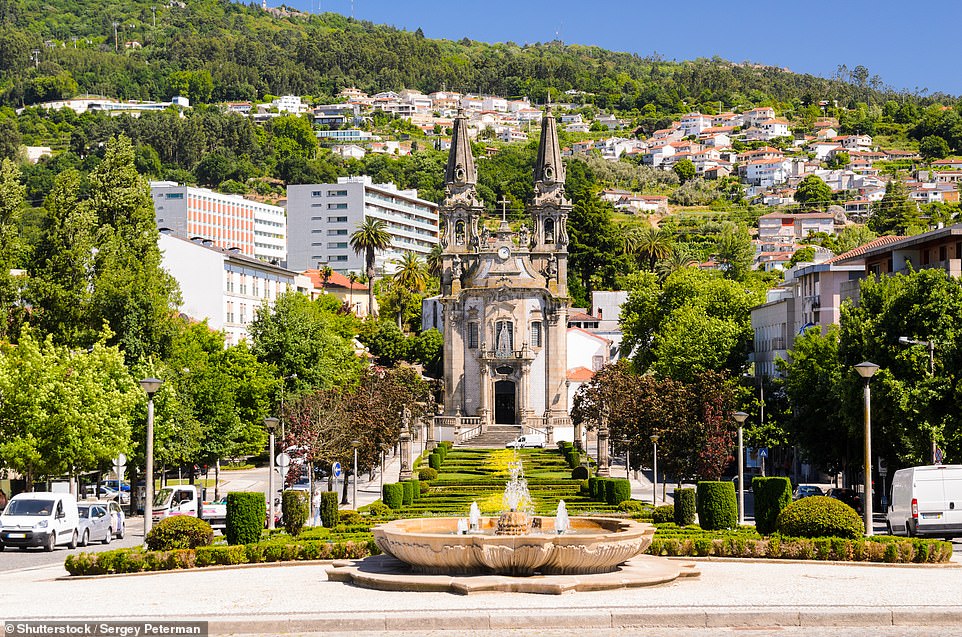 The second hardest-to-pronounce city in the world is Guimaraes, pictured, in Portugal

WATCH YOUR LANGUAGE: HOW TO SAY THE HARDEST CITIES TO SAY

It turns out that the Greek language is the hardest for Brits to master, closely followed by Slovene, Swedish, Dutch and Croatian.

Problematic pronunciation continued amongst international foods, with the French classic bourguignon (bur-gen-yon) found to be the hardest, followed by prosciutto (pro-shoot-toe) and quinoa (keen-wah).

Forty two per cent, meanwhile, admitted to struggling at tourist information centres abroad due to mispronunciations.

Michael Wilson, Managing Director at Bolsover Cruise Club, commented on the findings: ‘Mastering the national language when heading abroad is always a great way to impress the locals, however, it seems many of us don’t always get it right!

‘With languages in South-Eastern and Central Europe catching people out the most, this study reveals the irony that so many people can’t pronounce some of the most popular cities and landmarks to visit, no matter how close to home.

‘It was interesting to discover Greek topped the list as the most difficult language for tourists to speak, however that shouldn’t deter would-be travellers.

‘Trying to speak the local dialect will always contribute to cultural immersion, and with foreign language education declining in England, it’s important that holiday-goers do continue to make the effort when they head abroad.’