My World Cup victory – I found the Tsar’s gold! Sky TV’s Chris Skudder discovers the stunning scenery of Mongolia and Siberia as he takes a luxury train journey on the planet’s longest railway

I’d just completed my seventh World Cup, and this was a chance to explore the part of Russia thousands of miles east of where the football was played.

The great historical contrasts were all I knew of this remarkable country. The excesses of the imperial past, and the revolution that transformed 20th Century Russia.

For most people in the West the post-revolution Soviet era blocked out any view of what was behind the so-called Iron Curtain. 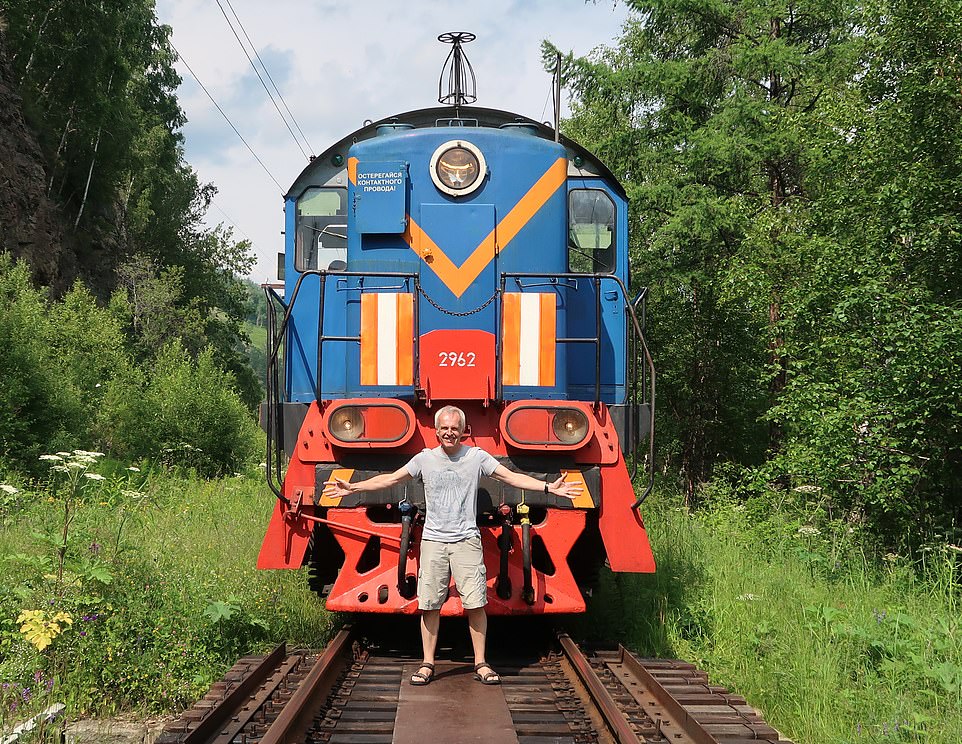 Tracking the past: Sky Sports TV presenter Chris Skudder stands in front of the Tsar’s Gold train in Russia

So what an opportunity to explore on board the much-vaunted Tsar’s Gold train. This ‘hotel on rails’ travels the length of one of Russia’s greatest engineering feats, the century-old Trans-Siberian Railway.

It’s the longest railway in the world, a mind-boggling 5,772 miles if you do the whole journey from Vladivostok to Moscow or, to give it some context, a quarter of the way round the world. By luxury train. Wow.

My journey was a variation, picking up the train that runs from Beijing through the Gobi Desert, Mongolia and Siberia before heading for Moscow via a string of vibrant Russian cities that are booming in the post-Soviet years. Forget the stereotypes of grey, unfriendly people and unforgiving terrain. These are myths.

Before I’d boarded the train, the World Cup had shown that football brings an emotional connection between all people regardless of backgrounds, a resonance that transcends political differences. 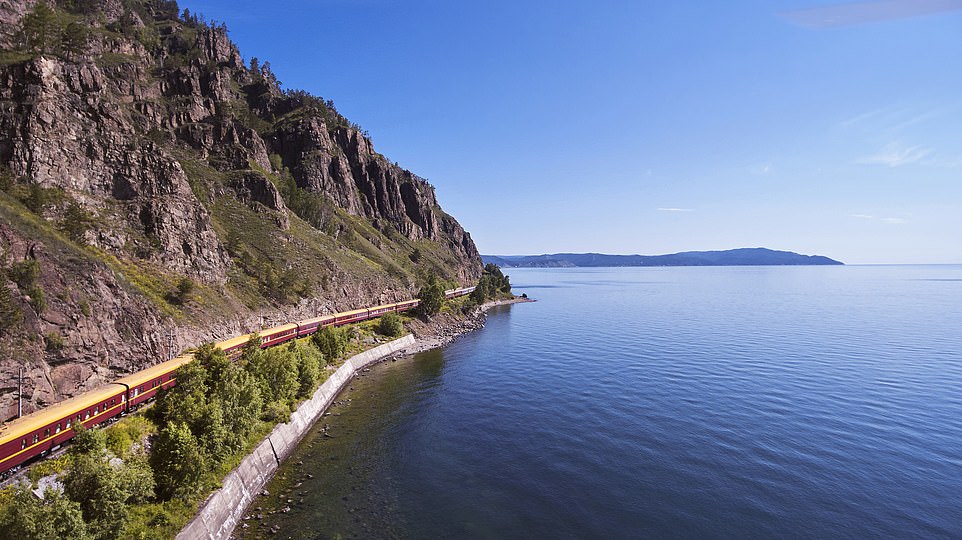 The luxury train travels the length of the planet’s longest railway – the century-old Trans-Siberian Railway. It is pictured here passing Lake Baikal 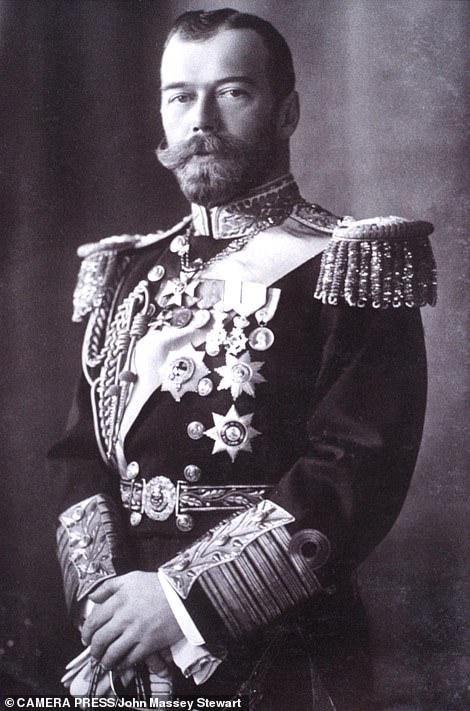 Tsar Nicholas II, which the luxury train is named after

The Russians proudly wanted to show off their country, and their hospitality and warmth were a joy.

But this part of my stay was more than just football. Siberia once conjured up images of cold and hostile lands.

In contrast, I jumped on to my hotel on the tracks – private compartment, comfy bed, hot showers and more great food than you could ever eat – in a very Asian part of Russia: the town of Ulan-Ude, just north of the Mongolian border, all sweeping vistas and snaking rivers dotted with Buddhist temples.

From there we travelled through mile after mile of Russian taiga, a mix of forest and grassland punctuated by pristine rivers, wild flowers, small communities of wooden houses, former Soviet towns and rolling agricultural land. It was a journey through the soul of Russia.

For thousands of miles north and east of these two slender sets of rails, one in each direction, the wilderness dominates the world’s largest country.

The name of the Tsar’s Gold train conjures up memories of the dramatic event that followed the 1917 Russian Revolution: the cold-blooded murder of the last Tsar, Nicholas II, his wife Alexandra and five children in a basement in Yekaterinburg. It was the brutal severing of Russia’s royal line.

By coincidence, the Tsar’s Gold train on my journey rolled in to Yekaterinburg, a thriving city on the Europe-Asia border on July 17, 2018, exactly 100 years to the day since those shocking events changed Russia’s history. 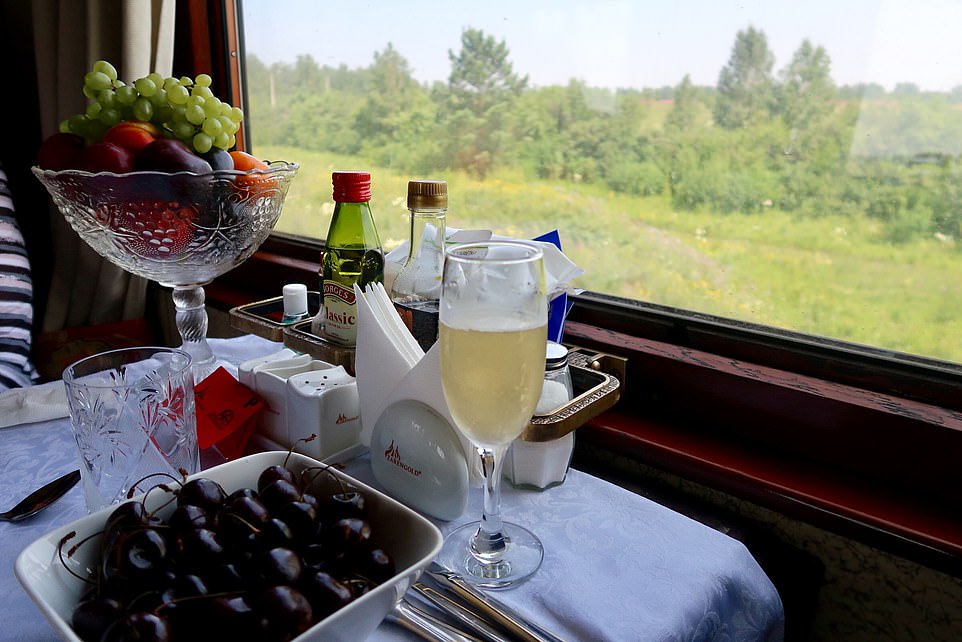 The fine dining that is served aboard the luxury train. Chris Skudder’s journey ran from Beijing through the Gobi Desert, Mongolia and Siberia before heading for Moscow

The centenary of their deaths drew emotional crowds to the extraordinary Church on the Blood, built only 16 years ago after the bodies of the Tsar and his family were found in a forest close to Yekaterinburg.

Ironically, a few hundred yards from their death site is yet another huge statue of Lenin – the man whose Bolshevik comrades were responsible for killing off Russia’s royal dynasty. Lenin statues are everywhere in Russia.

But what of this royal gold? Legend has it that as the empire crumbled and the revolutionaries took hold of Russia, a fortune in solid gold bars, the wealth of imperial Russia, disappeared somewhere in transit between St Petersburg and Siberia. 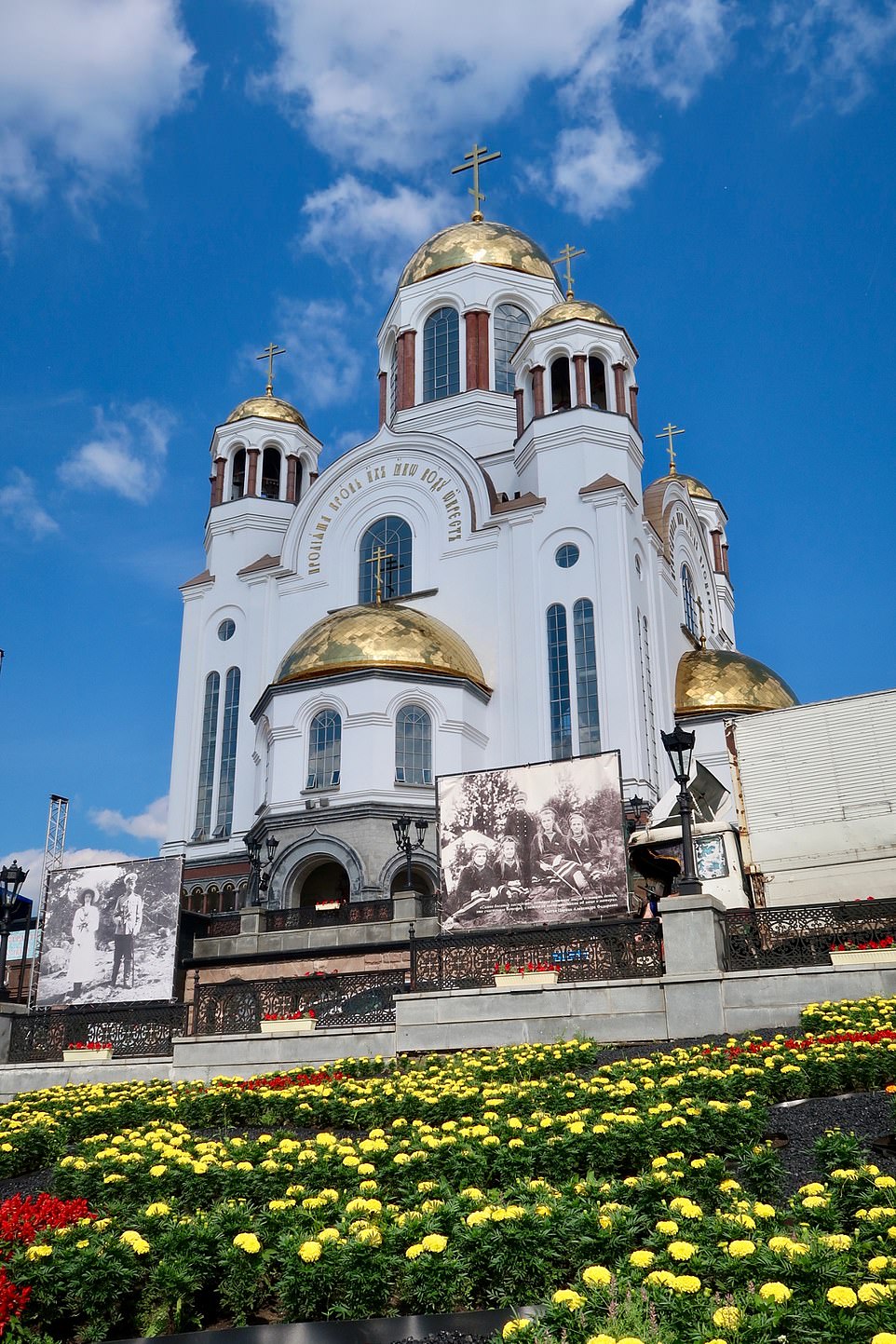 One of the sites that Chris saw on his journey was the Church on the Blood, where Tsar Nicholas was killed 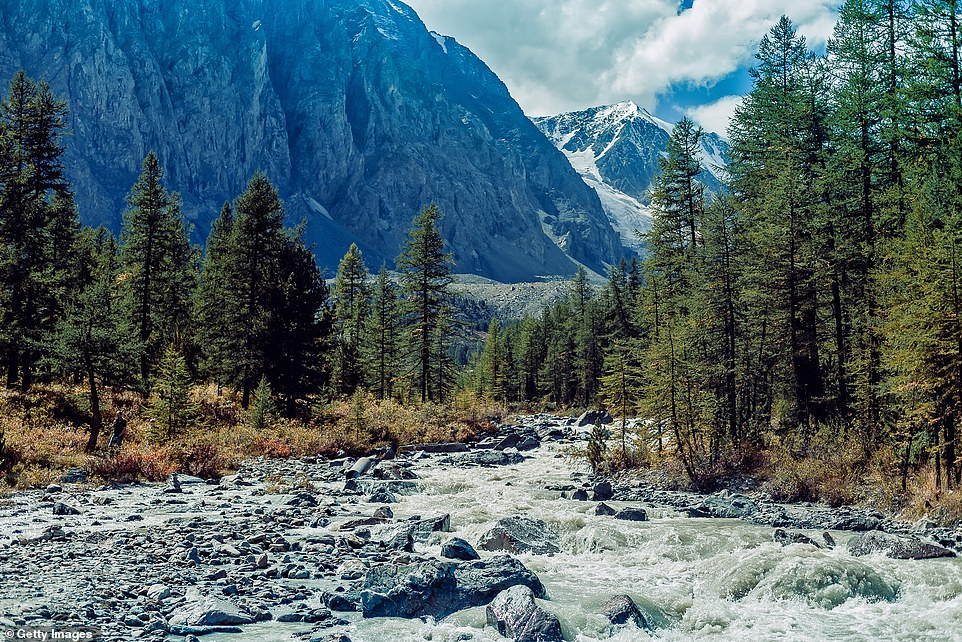 Our train had taken the Trans- Siberian Railway along the shores of the world’s oldest and deepest lake, beautiful Baikal in Siberia.

It’s a mile deep and contains 20 per cent of all the world’s fresh water. Legend has it that a train carrying the gold bars fell from a cliff at Baikal and sank to the bottom of the lake, never to be found.

More likely, the chaos of the revolution provided cover for the Bolsheviks to make off with the booty, as some had done with the jewels that were sewn into the underwear of the murdered royal family.

We headed west on ever-longer days, moving towards the light as the clocks went back five hours over the course of three nights on the train – one way of spreading out ‘jet-lag’. We passed through Omsk and the impressive Novosibirsk, Russia’s third-largest city but one of its youngest and most vibrant: it was created from scratch after the arrival of the Trans-Siberian Railway in the 1890s.

This was an epic, mobile history lesson aboard a classic mode of transport shared by a multi-national clientele. Russia, an extraordinary country hidden from the outside world for too long, has an unrivalled past and a fascinating future.

Regent Holidays (regent-holidays.co.uk, 020 7666 1244) offers a 16-day Luxury Trans-Siberian Tour on the Tsar’s Gold Private Train from Moscow to Beijing from £4,210pp, including one night in Moscow, three nights in Beijing, 11 nights on the train, transfers and guided sightseeing, but not flights or visas.