When Lonely Planet launched its list of Top 10 European Travel Destinations of 2017, Leeds appeared at number five – the only UK city to make the grade. A 200-year-old beer brewing heritage, thriving cultural scene and a carnival to rival Notting Hill all served to get this city noticed.

With 16 free museums and galleries to explore, including the renowned and recently refurbished Art Gallery, and more listed buildings than any other English city outside of London, Leeds has plenty to offer culture vultures and history buffs alike.

Although Leeds is the third largest city in the UK, the centre itself is surprisingly compact. Arriving at the train station (1), in the south-western corner, with the canal running across the very south of the city, you can walk to most of the major attractions within 20 minutes.

Head north-east to find the centre’s cultural hub and the Visitor Information Centre (2) (combined with the Art Gallery shop), conveniently located on The Headrow (visitleeds.co.uk; 0113 378 6977). It’s open Monday to Saturday 10am-5pm, with shorter hours on Sundays and Bank Holidays.

Start the day with a tour of Leeds Town Hall (3) (leedstownhall.co.uk/town-hall-tours). Hear stories of the city’s infamous criminals, see the old prison cells, then tackle the 203-step climb to the clocktower (4) to be rewarded with the best vantage point of Leeds’s majestic skyline. Dates for tours vary.

Now that you’ve got your bearings, head to the Leeds Central Library (5) (leeds.gov.uk/leisure/Pages/Central-library.aspx), located directly opposite the Town Hall. Constructed with Yorkshire stone, this Grade II listed building is a bibliophile’s dream, adorned with ornate Victorian details. Then make your way through the café and bookshop to get to Leeds Art Gallery (6) (leeds.gov.uk/Art-Gallery), closed Mondays, which boasts one of the most impressive collections of 20th century art in the UK. Admire their unrivalled collection of British sculptures and make your way across the bridge to The Henry Moore Institute (7) (henry-moore.org/visit/henry-moore-institute), then walk up Cookridge Street (8) to Leeds Cathedral (9) (dioceseofleeds.org.uk/cathedral). Although the original, larger version was demolished in 1899, and rebuilt on a smaller plot, this Grade II listed building still makes quite an impression. 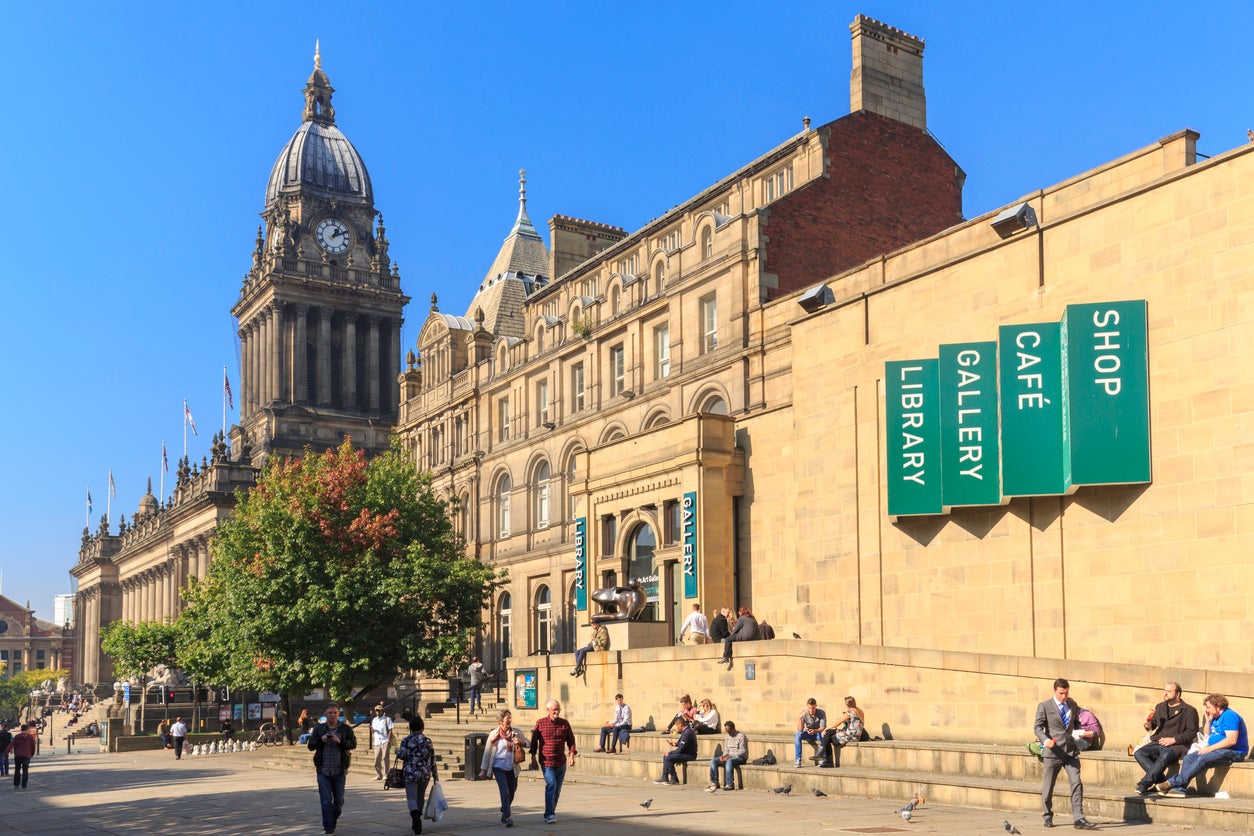 Further up Cookridge Street you’ll come across Millennium Square (10) (leeds.gov.uk/leisure/Pages/Millennium-Square), the city’s flagship project from the year 2000. A host of major events take place here – and depending on the time of year, you might stumble upon a Christmas market, city beach or outdoor festival. From here you can visit Leeds City Museum (11) (leeds.gov.uk/museums) and learn more about the history of the city and beyond, through varied and interactive displays; closed on Mondays.

Lunch on the run

When it comes to characterful shopping centres, Leeds has got it covered and then some. One of the loveliest is Victoria Quarter (13) (victorialeeds.co.uk). With marble floors and wrought iron and glass arches, these arcades wouldn’t look out of place in Milan, and the retailers are suitably high-end to match: Vivienne Westwood, Louis Vuitton and Ted Baker are worth at least a window-shop. 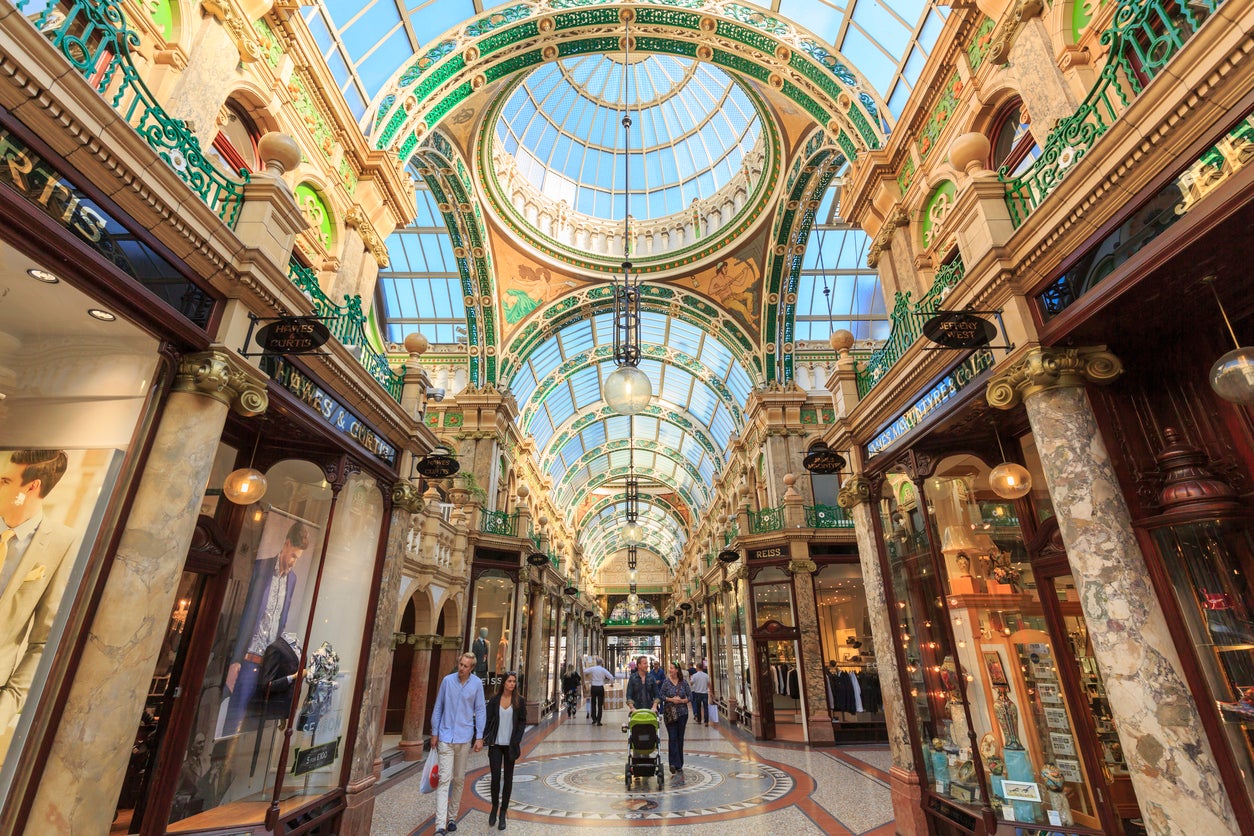 Head through Leeds’s impressive Dark Arches (14) to Granary Wharf (15), home to a host of independent café bars. Make yourself at home on one of the leather sofas at Archies Bar and Kitchen (16) (archiesleeds.co.uk), with a pint of beer from Yorkshire’s own Ossett Brewery in hand.

Dine with the locals

Take a walk along the canal to The Calls (17), a picturesque street along the River Aire, which once served as the docks. Family-owned Brassiere 44 (18) (brasserie44.com), closed Sundays and Mondays, serves British dishes using locally sourced ingredients, while Shears Yard (19) (shearsyard.com), closed Mondays, offers fine dining in a relaxed exposed-brickwork setting.

For an indulgent brunch that’s truly bottomless, start your day within the golden-soaked confines of the recently opened Neighbourhood (20) (neighbourhoodrestaurant.co.uk). Promising a taste of New York and unlimited seasonal cocktails and prosecco, it’s available every Saturday and Sunday, 10am-1pm. Be sure to try the American classic – delicious thick waffles topped with crispy bacon and drizzled with maple syrup. 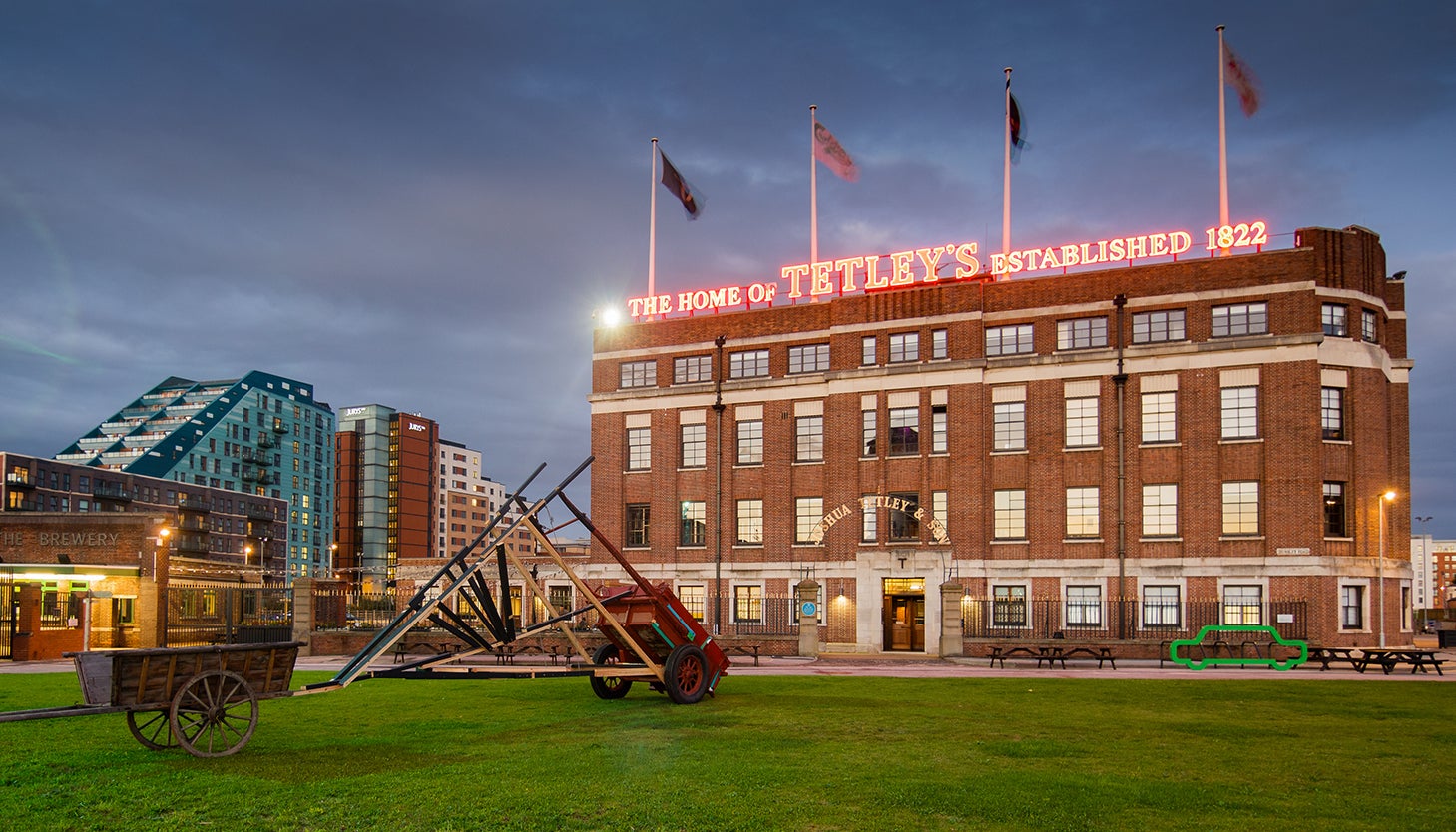 Walking is the easiest option to get around, but there’s also the City Bus (wymetro.com/BusTravel/Leeds), which stops at various locations for a flat £1 fee.

For a change of scene, hop on one of the two bright yellow water taxis (leedsdock.com/the-voice/leeds-dock-water-taxi) that run between the train station and Leeds dock (21) on the South Bank. These jolly vessels, named Twee and Drie, run every 20 minutes, Monday to Friday, 7am-7pm, and from 10am at weekends – and, best of all, they’re completely free.

Over on the south side of the canal sits The Tetley (22) (thetetley.org), a handsome art deco building that once served as the headquarters of Tetley Brewery, a 200-year old brand that is now synonymous with Leeds. The building is now a centre for contemporary art. Just like the other museums in the city, entry is free. On top of this, there’s a packed calendar of events, from salon talks to family art workshops, many of which don’t cost a penny. If you’re feeling peckish be sure to check out the bar and kitchen and try a traditional Yorkshire dish, such as a Tetley’s ale and beef stew. Wash it down with a Yorkshire tea or sample a pint of Tetley’s beer. Open daily, 10am-5pm, and until 8pm on Wednesdays.

A walk in the park

Be sure to venture beyond the city centre if you can. Kirkstall Abbey (23) (leeds.gov.uk) is just a 16-minute bus ride from Wellington Street and offers an astonishing example of a medieval Cistercian abbey. Painted through the ages by the likes of Turner and Thomas Girtin, the 12th century ruins still retain a spectral appeal. 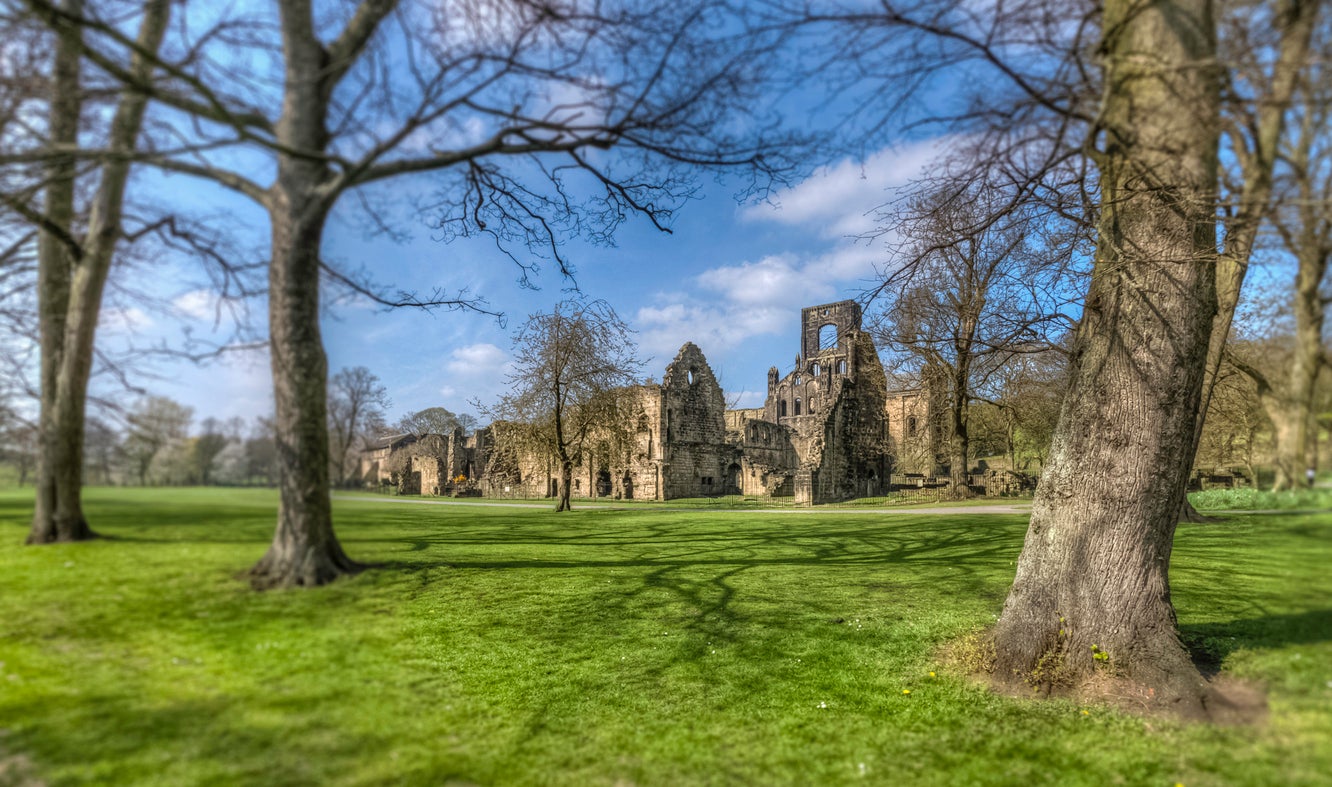 The icing on the cake

If you have an extra day to spare, continue with the Victorian theme and take a 30-minute train up to Harrogate. Unwind at Turkish Baths & Spa (24) (turkishbathsharrogate.co.uk), then treat yourself to a 1920s-style afternoon tea at the famous Bettys Tea Room (25) (bettys.co.uk).

The Virgin Train East Coast service (03457 225 225; virgintrainseastcoast.com) connects Leeds with London and other cities. From £22 one way.

TransPennine Express (0345 600 1671; tpexpress.co.uk) links Leeds with Liverpool and other northern and Scottish destinations. From £3.50 one way.

Newly opened five-star Dakota Deluxe (27) (leeds.dakotahotels.co.uk) is an award-winning boutique brand and the first to open in England. Smart and luxurious with just the right level of arty; doubles from £101, room only.

Conveniently located between the railway station and canal is DoubleTree by Hilton (28) (doubletree.hilton.com), offering contemporary rooms with all the mod cons, including 42” TV and complimentary wi-fi and bottled water. Doubles from £71, room only.

Ibis Styles (29) (ibis.com) offers convenience and comfort at an affordable price. It’s on Wade Lane in the north-eastern corner of the city centre, five minutes’ walk from Leeds City Museum. Doubles from £67, B&B.